Jim Callis from MLB Pipeline announced that the Pittsburgh Pirates will sign first round draft pick Travis Swaggerty for $4.4 M. The deal won’t be official until he passes his physical, which could be done as early as today. That deal is $160,200 under slot.

The news here isn’t that Swaggerty is signing, which was obvious since the moment he was selected. It’s the bonus amount, which gives the Pirates some more money to put towards over-slot bonuses in the later rounds. The Pirates already saved a small amount on the deals with fourth round pick Aaron Shortridge and sixth round pick Michael Flynn, and just over $100,000 with ninth round pick Logan Stoelke. Once the Swaggerty deal is official, then they will be just under $300,000 saved.

None of the other unsigned top ten round picks appear to need an over-slot deal. Assuming that’s true, then the Pirates will have over $800,000 available for over-slot deals when you throw in the 5% teams are allowed to go over without facing a severe penalty. That means if a player after the tenth round required a deal for $500,000 to sign, the Pirates would be able to go $375,000 over his $125,000 slot (standard for rounds 11-40) to sign him and still have $425,000+ for other deals.

We will update our draft tracker after the deal is official.

UPDATE 3:45 PM: The deal is official and as expected, he was assigned to Morgantown. Swaggerty will meet with the media in 30 minutes, so we will have another update later. In the meantime, Joe DelliCarri, the Senior Director of Scouting, had this to say: 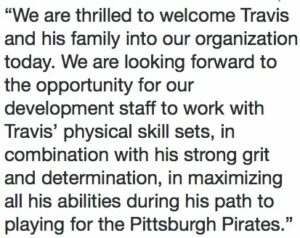