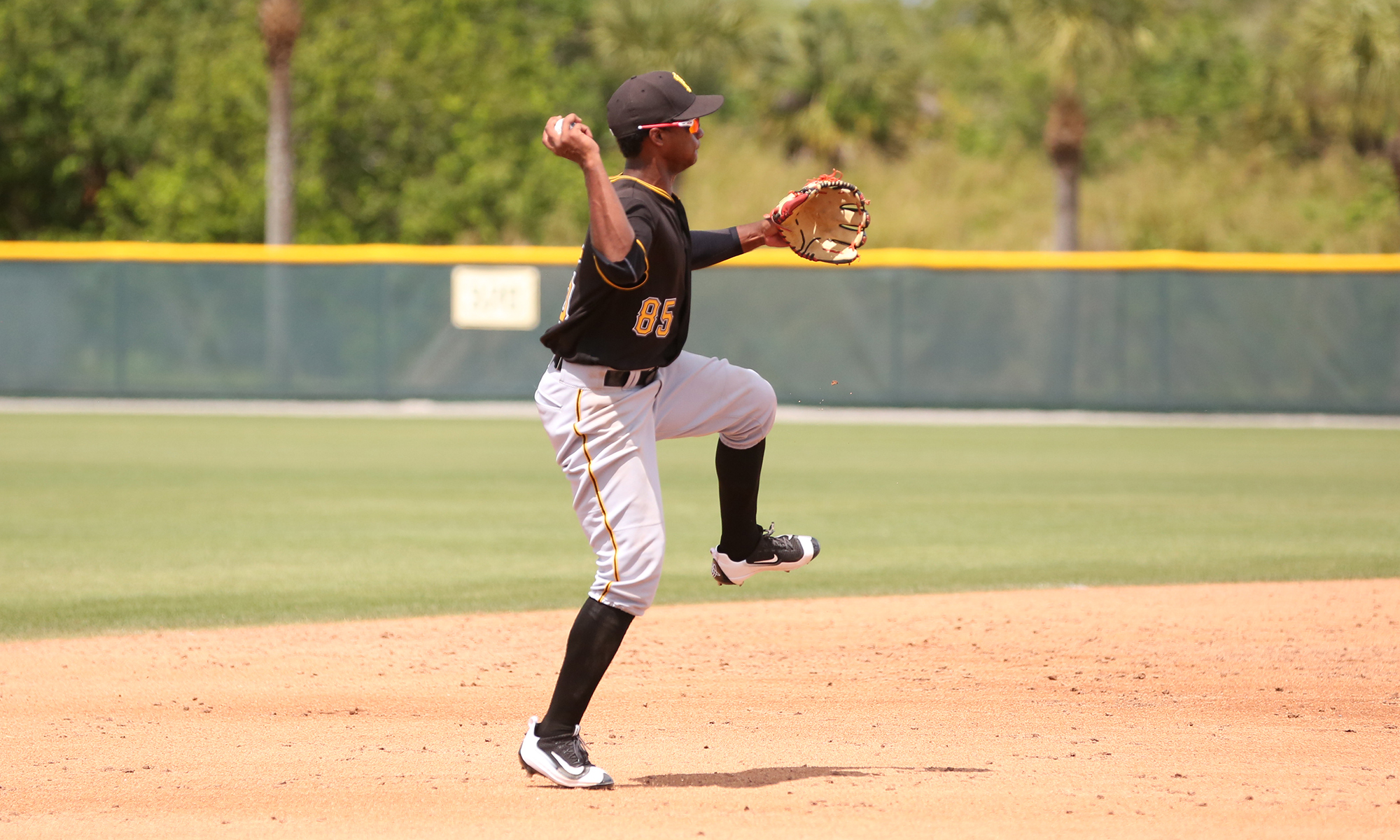 The Pittsburgh Pirates have some players of note who are upcoming minor league free agents. Last year, the big name was Edwin Espinal, although we later found out that Jin-De Jhang was also a free agent due to signing a year before he actually played his first game, which still counted as one of his seven season of pro ball. This year they have a couple of interesting decisions, along with some players of note in their final years.

The focus on Espinal last year wasn’t just whether or not he should be kept around/added to the 40-man roster, it was also how long they took to promote him to Indianapolis after a strong start for Altoona last year. They knew it was his last year before free agency and no one was blocking him at first base in Triple-A. Each time that he homered in Double-A, it just added to the frustration for fans. You had a 23-year-old first baseman with power and solid defense putting up strong numbers in Altoona and he didn’t arrive in Indianapolis until July 28th, with 35 games left in the season.

The decision right now to not keep him doesn’t look so bad because Espinal has been on the disabled list twice this year and his numbers have been mediocre at best recently. He’s still young though (younger than Kevin Newman), so a healthy Espinal was still an asset at the time who they lost for nothing. The Pirates seemed to avoid that late promotion issue with their two biggest upcoming first-time free agents.

Players like Casey Sadler, Alfredo Reyes and Jhang are free agents again after being re-signed last winter. I wanted to leave them out because it’s a different situation being a first-time free agent. I could see the Pirates bringing back all three of them on free agent deals. I also didn’t include Ryan Lavarnway, Damien Magnifico,  Jackson Williams or Bo Schultz because they all had prior big league experience before joining the Pirates and teams always have players like them become minor league free agents each off-season.

The main focus here is the four players in the system who have been here since their career started. Pablo Reyes, Eduardo Vera, Wyatt Mathisen and Eric Wood. Reyes received a promotion to Triple-A early this year to avoid a situation that was similar to Espinal. Vera is behind the other three because he missed almost all of two seasons due to Tommy John surgery, but they also promoted him somewhat early to Altoona this year after a terrific start at Bradenton. Mathisen also got promoted to Indianapolis after putting up huge stats in Altoona in April, while Wood was already at Indianapolis last year.

Reyes is the main guy here right now, pulling away from the others. He has been in the Indianapolis lineup every day, hitting .296/.346/.448 in his first 102 games in Triple-A. The fact that he’s hitting at the top of the order right now and playing full-time makes me think he could get a September look with the Pirates. I’m not saying that adding him to the 40-man means he will stay around beyond this season, but I do think that whenever Indianapolis wraps up their season (if they miss the playoffs, that date will be September 3rd), the Pirates could choose to take an extended look at him to help make their decision.

Vera just put together a strong pitching performance during a playoff race, going seven innings, with one run and seven strikeouts. He’s third in innings pitched in the system this year and he’s basically been good for two runs over six innings each outing. If you could take out back-to-back poor starts in mid-June, he has a 3.15 ERA in his other 13 starts with Altoona, to go along with a 2.95 ERA in Bradenton in nine starts. Factor in his total of only 8.2 innings pitched during the 2015-16 seasons as development time missed, and he makes an interesting case. The scouting report helps as a control pitcher with a nice four-pitch mix.

Mathisen was off to a crazy pace this season, which had him going from a bench player to seeing regular playing time. That didn’t last long, as he put up a .642 OPS in June and .680 in July, plus he is hitting .148 in his last ten games. He’s a poor man’s Pablo Reyes at this point, similar power, less speed, doesn’t have the contact skills and his position versatility doesn’t include as many spots as Reyes or the ability to play shortstop. I’m on the edge with Reyes, but he has a clear advantage over Mathisen.

Wood has dealt with multiple injuries this year and it seems to have affected him. Back in 2016, he was showing more power, drawing more walks, with fewer strikeouts and his defense was greatly improved. Then the Pirates tried to add outfield and first base to his resume, and without the constant reps at third base, his defense has regressed there. They made him more versatile, but it didn’t really add value.

I wouldn’t say that either Wood or Mathisen won’t be re-signed this off-season as minor league free agents, but neither is an asset that you would hate losing for nothing.  There also isn’t a chance for either of them to get something better than a minor league deal on the free agent market, except they might find a better opportunity to play regularly elsewhere.

Vera should be sought after, but I don’t think he has done enough for a 40-man spot right now. I think he’s a player you try to keep around and just risk him being taken in the Rule 5 draft. He might want to test the waters, but some minor league free agents will jump at a low six-figure deal when it’s their first chance to get decent money and that prevents them from getting any offers that might be better. The Pirates will have time to discuss a deal with him before he can negotiate with any other clubs.

Reyes is the big piece here and someone who has done enough at Triple-A to warrant a look. I can’t imagine at this point that a minor league deal to bring him back would work. He will have a chance for a Major League deal somewhere before he goes the minor league route. He also plays winter ball in the Dominican and will have a starting role on his team. That means by early October he can start auditioning for other teams, even though he won’t be able to sign yet. My guess is that the Pirates will need to add him to the 40-man roster to keep him.

The Pirates are in fourth place in their division, trailing by 11 games with 34 games left on the schedule. They trail the second wild card team by 7.5 games.

Indianapolis is tied for first place with 11 games left in their schedule.

Altoona is in second place and trails by a 1/2 game with 12 games left in their schedule. They lead the race for the second playoff spot by eight games.

West Virginia is in fifth place and trails by 11 games with 11 games left in their schedule. They trail the second place team in the overall standings by three games and could make the playoffs if Lakewood wins the second half title and the Power finishes second.

Bristol is in third place and trails by six games with six games left in their schedule. They are three games out of second place, though the team they are chasing owns the tiebreaker. The second place team also gets a playoff spot.

The GCL Pirates have been eliminated from the playoff race.

The DSL Pirates1 have been eliminated from the playoff race.

The DSL Pirates2 have been eliminated from the playoff race.

Today’s Starter and Notes: The Pittsburgh Pirates were off yesterday. They travel to Milwaukee now for a three-game series, where Joe Musgrove will get the start, coming off of his outing on August 18th when he gave up one run over seven innings against the Chicago Cubs. The Brewers will counter with left-hander Wade Miley, who has a 2.18 ERA in 45.1 innings, with 29 strikeouts and a 1.21 WHIP. He has allowed three earned runs over 11 innings in his last two starts combined.

The minor league schedule includes Tyler Eppler going for Indianapolis, trying to break a string of seven straight starts with at least three runs allowed. Altoona’s Dario Agrazal has given up four runs over his last 26 innings. Bradenton’s Mike Wallace allowed one run over six innings in his last start. Sergio Cubilete has made ten starts and ten relief appearances for West Virginia. He has a 5.71 ERA as a starter, 5.46 in relief, with matching 1.66 WHIPs in each role. The GCL/DSL seasons wrap up tomorrow.

From Bradenton and Altoona over the last few days. Here’s Bligh Madris hitting a walk-off homer

8/14: Shane Baz traded as the player to be named later to the Rays.

Four former Pittsburgh Pirates players born on this date, including an infielder for a World Series winner, who went on to manage the team for two full seasons. Starting with the most recent player first:

Jewel Ens, 1922-1925 infielder and manager from 1929 until 1931. He also served five years as a Pirates coach under Pie Traynor. After hitting .296 in 47 games during the 1922 season, he moved into a coaching role and occasionally saw playing time. Ens played a total of 67 games for the Pirates, his only Major League team. He had a 176-167 record as a manager for the Pirates, taking over the team late in the 1929 season.

Bill Kelsey, 1907 catcher. Played just two career Major League games, both at the end of the 1907 season for the Pirates. Went 2-for-5 with a run scored.