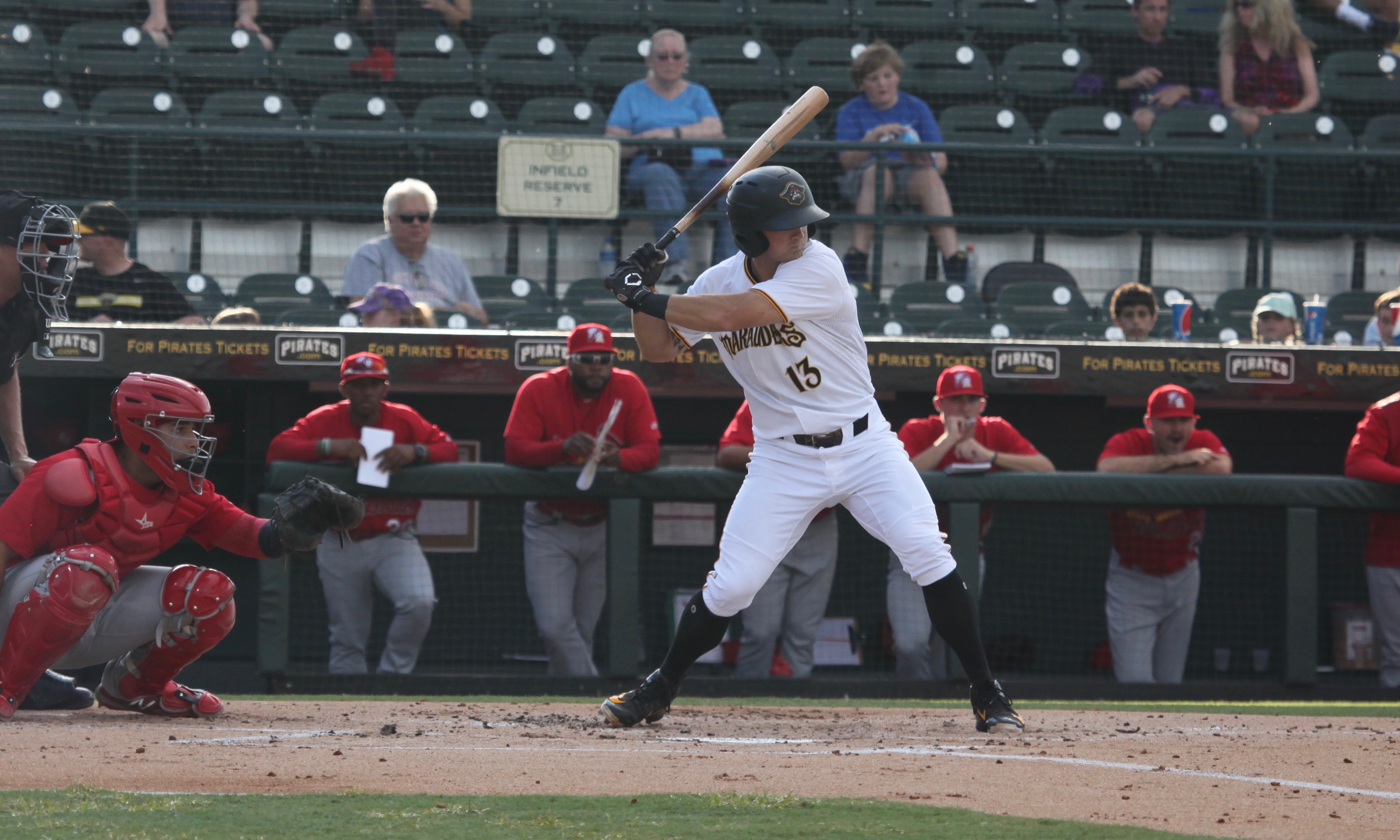 Mitch Keller got the start and worked around two errors to put up decent results. In six innings, he allowed eight hits and a walk, with six strikeouts. He gave up three runs, but all three were unearned. Keller gave up some hard hits, including four doubles, and got out of one jam when Pablo Reyes in left field threw out a runner at the plate. He filled the strike zone in this game, with 68 of 99 pitches going for strikes. Nick Burdi followed with a scoreless inning, needing just ten pitches to allow a hit, get two fly outs and a strikeout. Tanner Anderson breezed through the final two frames for the save.

Jose Osuna’s throwing error in the first led to two unearned runs, then he came back in the bottom of the inning and hit a two-run homer. Kevin Kramer added a solo homer in the fourth, his 14th of the season, then Eric Wood homered for the third straight game in the eighth inning. He now has 11 homers. Kramer stole his 13th base. Pablo Reyes had a walk, run scored and his 12th steal.

Eduardo Vera probably has more pressure than anyone each time he takes the mound. Altoona is fighting for first place in their division and he’s a minor league free agent at the end of the season. He went out earlier this week and gave up one run in seven innings, then came back on Sunday night and topped that outing by throwing 7.2 shutout frames, while striking out a career high nine batters. Vera threw 102 pitches, with 67 going for strikes, and he allowed just two hits. Geoff Hartlieb recorded the final out of the eighth, then retired the side in order in the ninth for his ninth save. The win clinched a playoff spot for Altoona, but the division lead is still up for grabs.

Cole Tucker had quite a day on offense, going 3-for-3 with a walk, run scored and his 33rd stolen base. The Curve had just four other hits in the game and he drew the only walk. Christian Kelley had the big hit in the game, a two-run homer in the second inning, his eighth of the season.

Bradenton lost 8-6 to Dunedin in the first game of a doubleheader.

After two straight rain outs pushed his start back, Mike Wallace pitched well on the extra rest. He went six innings, allowing one run on eight hits and two hits batters. He didn’t walk anyone and had just one strikeout, but he posted an 11:4 GO/AO ratio to help him get his outs. Angel German pitched the seventh for the save, but allowed three runs and three hits. All six runners scored, with the last three coming against Jordan Jess, who also gave up a run of his own.

Hunter Owen had three hits, including his 17th home run of the season. It was his third straight game with a homer. Albert Baur collected his 18th double. Bligh Madris had a single, walk and two sacrifice flies. Jared Oliva had a walk, two stolen bases (32 on the season) and two runs scored. Adrian Valerio had two hits and an RBI.

In game two, Adam Oller got the spot start and he went five innings, allowing one run on two hits and no walks, with five strikeouts. After a lengthy rain delay, play resumed with Evan Piechota on the mound and he had a lot of difficulties, but Bradenton was up 11-1 at the time, so his five runs allowed just made the score closer at the end.

Hunter Owen homered for the fourth straight game. He also singled, scored twice and drove in three runs. Five players in the lineup collected doubles. After two hit in the first game, Adrian Valerio had two more hits, including his 23rd double. Casey Hughston and Raul Siri each had three hits. Hughston collected two triples. Siri had a double and two RBIs. He is now hitting .372 since being promoted to Bradenton.

Hunter Stratton got the start in place of Max Kranick, who has a blister on his pitching hand. Stratton was on normal five days rest, although he was originally scheduled to pitch tomorrow. He battled through five innings to allow just one run on four hits and three walks, with four strikeouts. Drew Fischer allowed a run on two hits and two walks in his two innings. Logan Stoelke recorded one out and walked one, before leaving with an apparent arm injury. Beau Sulser got the final two outs in the eighth, then he handled the ninth, needing just 13 pitches for five outs.

The Power got some help from five Rome errors. Everyone in the lineup had at least one hit, with the big one being a two-run homer from Robbie Glendinning, his second with the Power. Calvin Mitchell, Rodolfo Castro and Raul Hernandez each had two hits. Hernandez drove in a run and scored twice. Rafelin Lorenzo scored two runs. Lolo Sanchez had a single, walk and his 28th steal.

Mike LoPresti got the start and went five innings, allowing three runs on seven hits, with one walk and one strikeout. Cody Smith followed with a shutout inning, then Shea Murray did the same. It was the first outing this season for Murray without a walk. Nick Mears, who signed earlier this week, made his pro debut in the eighth and he retired the side in order on 13 pitches, picking up two strikeouts. Alec Rennard took the ball in the ninth with a 4-3 lead and he allowed three straight hits with two outs to tie the score. He threw a scoreless tenth for the victory.

On offense, Fabricio Macias continued his recent hot streak by going 3-for-4 with a walk and an RBI. Edison Lantigua also had three hits, including his eighth double. Daniel Amaral had two hits and drove in two runs. Brett Kinneman went 2-for-5 with his 14th double and two runs scored. Zack Kone had two hits and a run scored.

Bristol lost 9-4 to Elizabethton. This loss eliminated them from the playoffs.

Brad Case got the start and couldn’t follow up his impressive 5.2 shutout innings in his Bristol debut earlier this week. He went four innings (pitched into the fifth), allowing four earned runs on nine hits and three walks, with one strikeout. He was promoted to Morgantown after the game and will get one more start this season. Lizardy Dicent followed with two shutout innings and three strikeouts. Austin Shields had a rough seventh, giving up three runs on four hits. He didn’t walk anyone, but he threw three wild pitches. Shields allowed another run in the eighth before Vince Deyzel tossed 1.2 shutout innings.

Chase Lambert had two hits and drove in two runs. Mikell Granberry and Yondry Contreras each had RBI singles. Brendt Citta and Victor Ngoepe each had two hits and a run scored. Ngoepe tripled, while Citta also added a walk. Gabriel Brito had a single and a walk.