2017 Bristol: A Look Back at the Top Ten Prospects 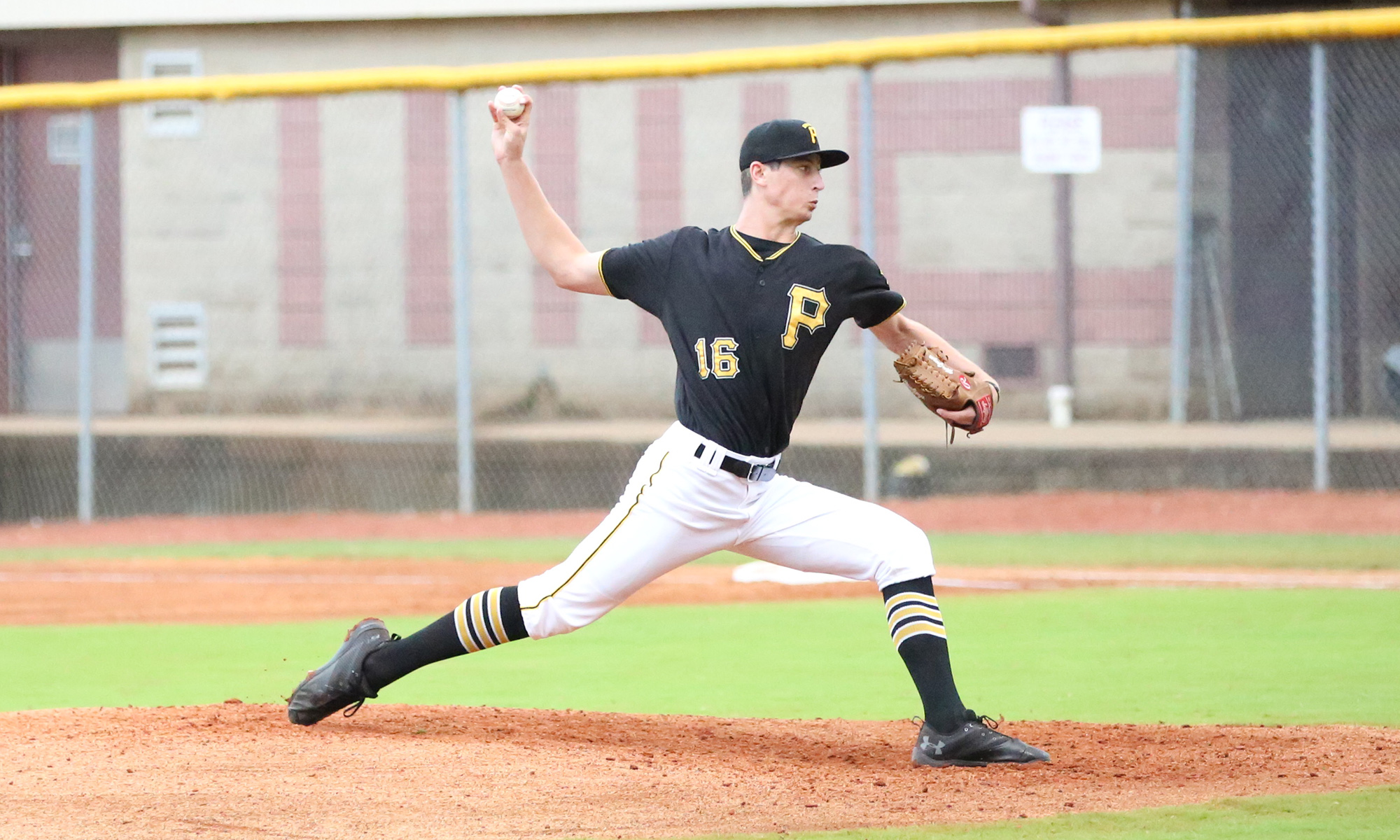 We are in the process of posting our season recaps for each affiliates of the Pittsburgh Pirates. Separate from that article, we are doing a top ten prospects list for each team. We have also added a third article for each team. The extra one is a look at the progress of the top ten prospects from the previous season. The DSL and GCL lists were posted last week and can be found below. Starting this week, the “look back at 2017” will immediately follow the recap/top ten for each of the other six affiliates. Today we look at the top ten prospects from the 2017 Bristol Pirates.

Last year’s club in Bristol had a few interesting pitchers and not much on offense. It was not a strong group, with only two players making our top 50 prospects and one was ranked 40th overall. The next four players on our list all got some consideration for the top 50, falling in the group of 20 or so players with similar rankings, who just missed. The final four players just filled out the list, but each gave reasons why they could someday make the top 50 prospects if everything went right.

Here’s the top ten from last year, followed by comments on each player:

1. Braeden Ogle, LHP – Not much to talk about here with Ogle because he missed most of the season with shoulder inflammation. When he began his rehab from the injury, it came back, which shut him down longer the second time. He’s currently down at Pirate City continuing his rehab and we were recently informed that he will be back on the mound in games. Before the injury, he made the jump to West Virginia this year and the few scouting reports we received were all solid. We still rated him fairly high in our mid-season prospect update because of his potential, but this was a lost season for the 21-year-old lefty.

2. Domingo Robles, LHP – Robles also made the jump to the West Virginia rotation and he pitched so well that the Pirates promoted him to Bradenton by the end of the season. He’s an interesting case, because you would think that someone who turned 20 years old during the season and was already in High-A, would see a spike in his prospect status. That didn’t happen though because his velocity was down slightly, while everything else remained the same. On paper he looks a lot better, but the hope was that he would add to his low-90s velocity. Instead, he was more in the range of what we saw in the GCL in 2016, with an average velocity around 90 MPH. He’s still an interesting pitcher as a young lefty, with excellent control of a strong curveball and solid changeup. The velocity increase could still eventually be there as well.

3. Edison Lantigua, OF – Lantigua put up strong stats on offense at 20 years old last year, making it seem like he was becoming the prospects the Pirates thought he could be when he signed for $275,000 in 2013. A thumb injury limited him during the 2015 season, but he had hit well in the DSL in 2014 and GCL in 2016. Lantigua put up a .770 OPS with Morgantown this year, which doesn’t sound like much, but the NYPL is a pitcher-friendly league and he was actually one of the top 15 hitters in the league (he was in a three-way tie for 13th best OPS). The problem here seems to be that you have a guy with four years of success at the plate, yet he is two seasons away from free agency and hasn’t played a game of full-season ball yet. A push to Bradenton next year would be ideal to hurry up his pace.

4. Travis MacGregor, RHP – MacGregor was the only player on this list who made a real jump in progress. He was still considered a project at this point last year, but he came into Spring Training in 2018 looking stronger, with better velocity and control. Most of the progress he made came from having a cleaner delivery with fewer moving parts, which is what he has been working on since signing in 2016. The only downside to his 2018 season was that two separate (and different) arm injuries limited him to 70.2 innings. When he was healthy early on, he was piling up strikeouts. That slowed down a little during his second stint with the team, but his overall results were actually better. As long as he can continue next year where he left off this year, then it’s possible that he ends up as the best prospect in this group.

5. Alex Manasa, RHP – Manasa was drafted last year as a pitcher, after splitting his time between outfield and pitching in college. He came from a community college and he’s still just 20 years old, so you should expect some growing pains as a pitcher. He actually showed some strong improvements during the 2017 season, throwing harder and getting better results by the end of the year. The added velocity didn’t carry over to this year and reports from Extended Spring Training said that he allowed a lot of hard contact. Manasa got the top spot in the Morgantown rotation, but it was a somewhat difficult year. His 4.48 ERA and 1.37 WHIP don’t sound really bad, but in the context of a pitcher-friendly league, both numbers put him among the five worst pitchers with enough innings to qualify for league leaders. He led the league with 80.1 innings, but he finished tied for 36th in the league in strikeouts.

6. Jason Delay, C – Usually the jump from Bristol to Bradenton would be considered extremely impressive, but Delay was a different case. The Pirates sent him to Bristol last year to work with the young pitchers. He was a college senior, coming from one of the biggest college programs (Vanderbilt), so the Appalachian League would have been a very poor placement for him if it wasn’t done on purpose. Delay was known in college for his outstanding defense and pitchers in Bristol raved about working with him. He turned 23 years old before this season and put up below average offensive stats with Bradenton. After some early spring throwing issues, he settled down and put together a strong season on defense. That defense will probably get him to the majors someday, but the bat will limit his role.

7. Hunter Stratton, RHP – Some early season starting rotation injuries helped Stratton get to West Virginia, where he made 20 starts and two relief appearances. He had a 2.79 ERA and a .221 BAA in the second half, but control issues all season led to high pitch counts and limited his outings. He threw just 101.2 innings this season, averaging under five innings per start. Stratton had an odd split, with 42 strikeouts in 40.1 during the first half when he had a 6.25 ERA. The strikeouts dropped to 40 in 61.1 innings during his successful second half. He doesn’t have great velocity, dropping down into the high-80s during starts, but he has a big 6’4″ frame, so we could see more from him. Being more efficient with his pitch counts would help.

8. Ben Bengtson, 3B – Bengtson is an athletic player, who was drafted as a shortstop, but has mostly been at third base with the Pirates. He has decent speed and some power potential in his bat. He was a college draft pick, who put up a .774 OPS with Bristol last year. The athleticism, defense, speed and power combo put him on the list more than the OPS did, because that’s a mediocre number for a college player. Bengtson got a promotion to West Virginia to begin 2018 and was seldom used off the bench. He didn’t really get much playing time until Dylan Busby got hurt, but Bengtson also missed some time in Busby’s absence. Late in the year, Bengtson was sent down to Morgantown, where he saw regular at-bats. Everything that got him on this list last year was still there, but the .583 season OPS means that he really has to show something next spring to not get lost in the infield shuffle.

9. Yondry Contreras, OF – Contreras has never hit well at any level and 2018 was more of the same as he repeated Bristol. He was the Pirates top international signing in 2014 and he has shown signs of why they paid him a big bonus. He’s a strong defensive outfielder with a cannon for an arm. He’s also in terrific physical condition and has been known to make some of the hardest contact at Pirate City during the spring. The problem has always been too many strikeouts. He actually improved a lot in that area this year, but he still didn’t do much damage at the plate. Contreras will be 21 all of next season and he has the tools for success, especially if he can keep the strikeouts limited.

10. Drew Fischer, RHP – Fischer was having a solid 2018 season until faltering late and ending up on the disabled list in late August. Even with some bumps late, which may have been related to his injury, he finished with a .238 BAA and 50 strikeouts in 44.2 innings. He has decent velocity, showed improved control this season and allowed just one homer. While he isn’t someone who will get top 50 prospect consideration in our 2019 Prospect guide, he does have some prospect potential.