2017 Morgantown: A Look Back at the Top Ten Prospects 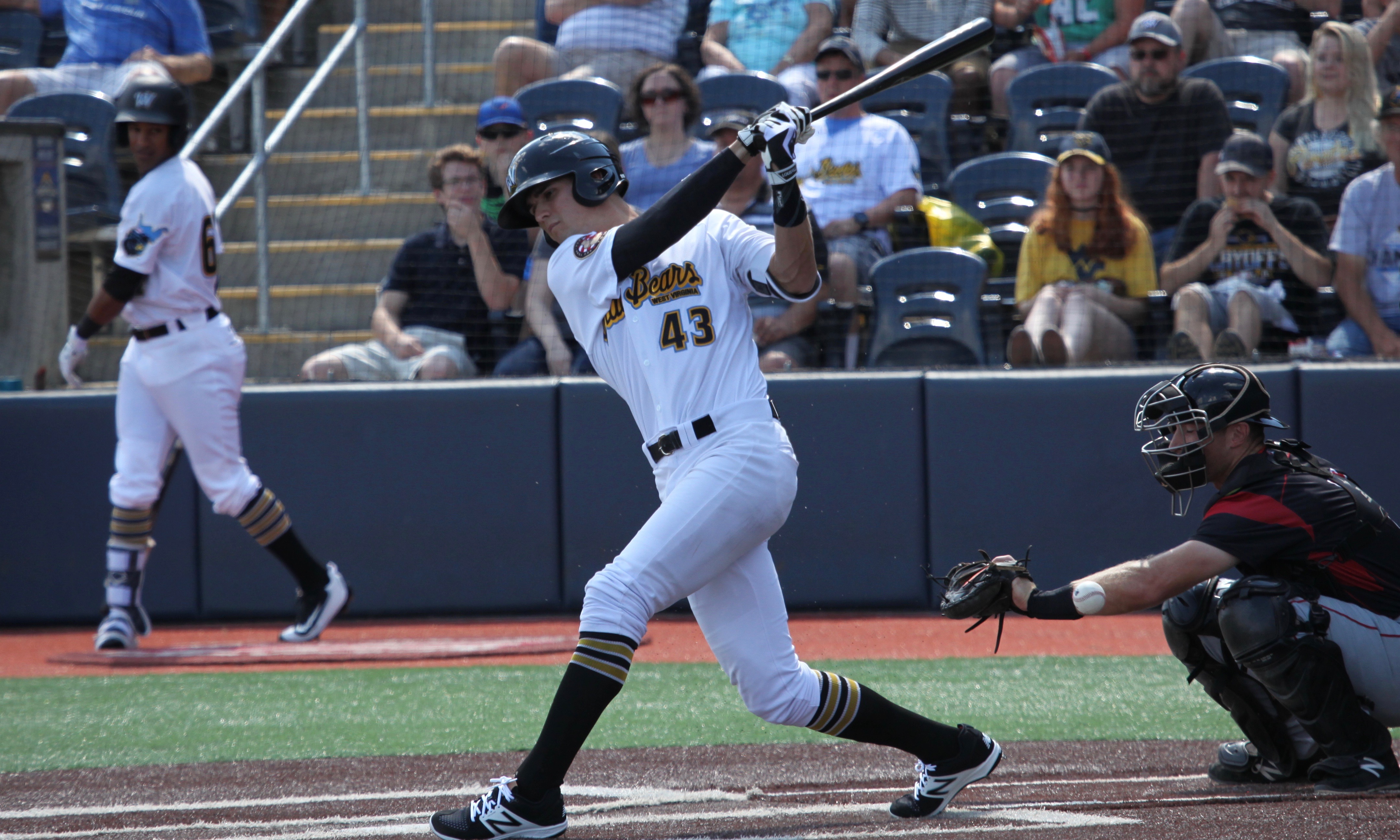 Last year’s club in Morgantown had a lot of interesting bats from the 2017 draft, but no prospects who were ranked high in our 2018 Prospect Guide. That’s mostly because the Pirates used their first four picks of the 2017 draft on high school players. They also sent fourth round pick Jason Delay to Bristol and sixth round pick Cody Bolton to the GCL, since he was a high school player. Last year’s draft meant that the GCL Pirates had a stacked lineup, but Morgantown wasn’t up to usual standards. It actually turned out to be a decent group overall last year, just not the normal separation you see between the top prospect on a team and the tenth best.

Here’s the top ten from last year, followed by comments on each player:

1. Tristan Gray, INF – Gray was a 13th round pick and looked like the best of this group from day one, showing a line drive stroke that resulted in a lot of hard contact. He was also an athletic looking middle infielder. The Pirates traded him away for Corey Dickerson earlier this year and Gray played in the Florida State League for the Rays, where he had a slow April and slow finish, but ended up getting a promotion to Double-A for the playoffs. Gray didn’t hit for average, but he led the FSL in doubles by a wide margin and hit 13 homers. His stock is probably about the same as last year.

2. Deon Stafford, C – Compared to Gray, Stafford had an opposite season at the plate. He hit well early and late, but had his issues in the middle of the season. He also dealt with a concussion in late July. Considering that he was a 22-year-old college player in Low-A, his stats didn’t really stand out. It’s great to see from a catcher, but he doesn’t have strong defense overall, so you want to see a little more in case he has to move to a more offense-oriented position. His prospect status took a little bit of a hit, but he did end up in our mid-season top 50 after some players left the list.

3. Bligh Madris, OF – Madris jumped to the FSL and put up mediocre stats. He showed a little power, though it came with a low average and very few walks, with an increase in his strikeout rate. He’s a corner outfielder with average at best speed, so almost all of his value comes from the bat. He had a nice debut last year, which is what got him ranked this high, then couldn’t follow it up in 2018. His stock is down slightly, though you do credit him for skipping a level to a pitcher-friendly league.

4. Ike Schlabach, LHP – Schlabach pitched well considering the role he had with West Virginia this season. He was in and out of the starting rotation, working in long relief during the rest of the time. The Pirates tried to get more velocity out of his delivery last fall, which we really didn’t see this season. Schlabach allowed batters to hit .282 against him and his ground ball rate declined to the point that he was a fly ball pitcher this season. His prospect status slipped a bit, though he did finish strong and showed a slight uptick in his strikeout rate, so it’s possible it could return.

5. Dylan Busby, 3B – Busby was the highest 2017 draft pick in Morgantown last season, getting selected in the third round due to his power potential. He looked bad in his first shot as a pro, mostly due to a long swing that led to a lot of swinging strikes. He was rated fifth overall because the power is legit, and he has the ability to stick at third base. Busby had a rough 2018 season, getting hit in the face with a pitch in May, then getting hit in the helmet during his return. He was also injured late in the year. He showed an increase in his strikeout rate, which was already somewhat alarming, but that was off-set some by more walks and power. It was basically a lost season with all of the downtime.

6. Jared Oliva, CF – Despite a slow finish mostly due to injury, Oliva (pictured above) took the biggest leap forward in prospect status from this group. He didn’t show any power last year, but looked interesting due to plus speed and solid defense. Oliva went from no homers in 56 games last year to nine this season. He also increased his average and walk rate slightly, leading to a better OBP, which led to 33 stolen bases. Add in the fact that he skipped a level, plus he had defense in center field that looked above average, and you have someone who went from outside our top 50 prospects to someone who ranks 21st in the system. He finished poorly after our mid-season update, so he may drop a few spots, but that doesn’t affect the improvements we saw this season.

7. Gavin Wallace, RHP – Wallace had strong results last year after being taken in the 15th round. He had a 2.65 ERA, with just five walks, and no hit batters or home runs allowed, in 68 innings. He was a ground ball pitcher, who showed an increase in strikeouts near the end of his season. Wallace put up decent stats in West Virginia this year before being promoted to Bradenton. The results didn’t carry over to High-A, where he got hit hard in 57 innings. He has decent velocity, but hasn’t really developed a strikeout pitch and that hurt him as he moved up in the system, especially since he was getting barely half of the ground outs we saw last year. Even his walk rate increased at each level, so that hurt as well.

8. Scooter Hightower, RHP – Hightower had a lot of success despite being the type of pitcher we warn against at the upper levels. He doesn’t throw hard and he’s a fly ball pitcher, which isn’t the best combo. He has excellent control of all of his pitches, plus his breaking ball looked better this season, so that helped him succeed this year. After being named as our August Pitcher of the Month in 2017 with Morgantown, he repeated that feat three levels higher this August to help Altoona to the playoffs. He doesn’t have a high upside at this point, but some added velocity (without sacrificing command) would really help his case.

9. Chris Sharpe, OF – Sharpe was an over-slot signing in the 14th round last year due to his power potential. That really didn’t show up this year, as he hit for a higher average in 2018, yet his slugging percentage was basically the same as last year. Until he shows more power, Sharpe looks like someone who will have a lot of trouble at the higher levels due to the swing-and-miss in his game. He missed seven weeks with a back injury late, but returned healthy at the end of the season.

10. Joel Cesar, RHP – Cesar is about the same pitcher as last year. He throws hard and doesn’t walk many batters, but he doesn’t have the control you want to see. The velocity and off-speed pitches will get him to the upper levels, but he definitely needs better control. The higher he goes, the more disciplined the hitters and his walk rate could increase to a point where it keeps him from advancing. Cesar will be 23 years old next year, though he’s still fairly inexperienced as a pitcher with just 88 innings as a pro.