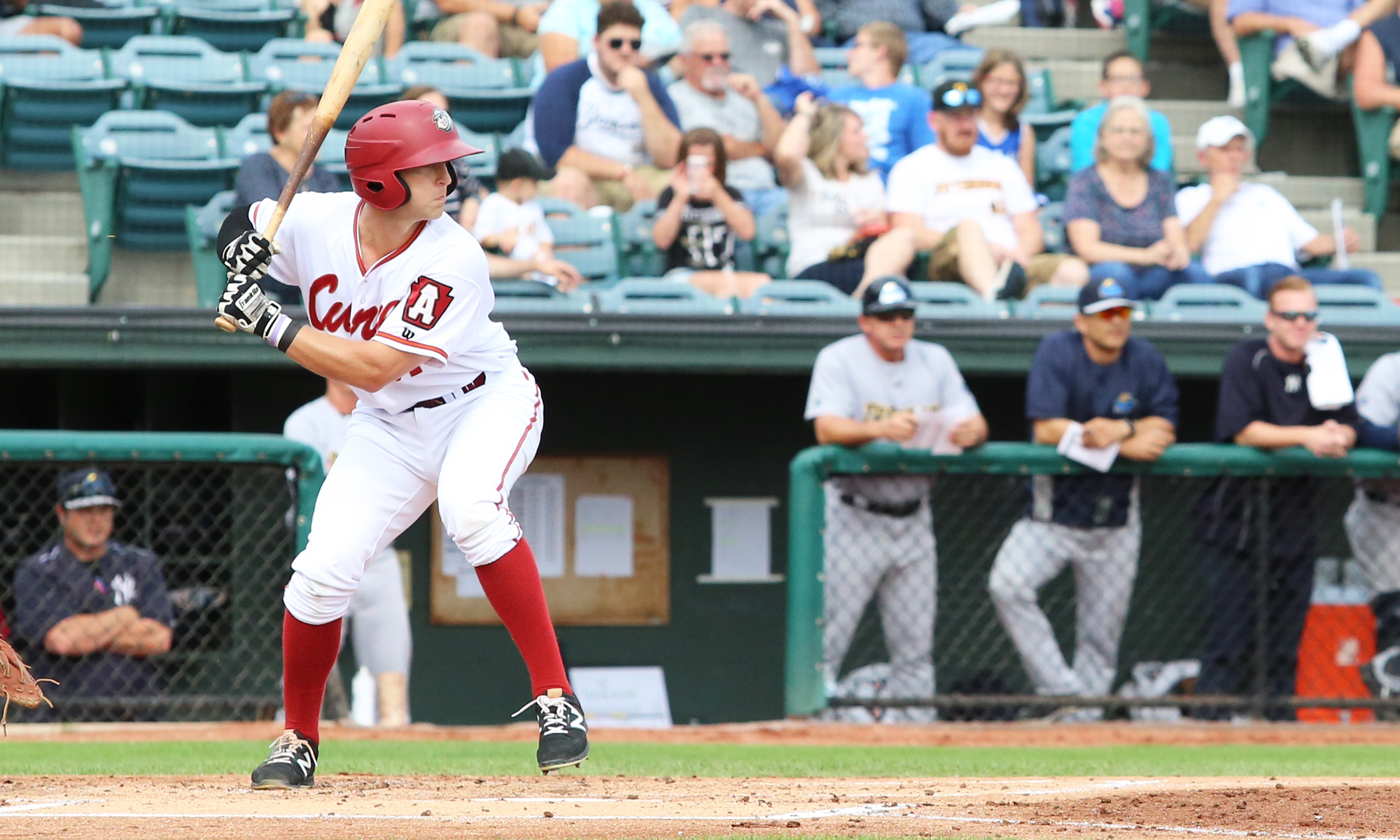 Altoona had a rough start to their game on Friday night, but ended up scoring the final eight runs to avoid elimination in their best-of-five series versus Akron.

James Marvel has pitched well since being promoted from Bradenton, but his first inning turned ugly in a hurry. He walked the lead-off batter, then after recording the first out by getting Josh Donaldson to pop out to shortstop, Marvel gave up a double and a walk to load the bases. The next batter cleared the bases with a three-run double. A single and a triple would make it 5-0 in the top of the first.

After Altoona went down in order in the first, Marvel had a quick second inning, again retiring Donaldson. Jin-De Jhang had the Curve’s first hit in the bottom of the second, but Jordan George followed with a fly ball to center field to end the inning.

Marvel got through the third quickly, allowing just a single. Stephen Alemais singled with one out in the third for Altoona’s second hit. He was easily doubled off of first base on a routine fly to right field, which appeared to be on a hit and run, or possibly a straight steal.

The fourth inning was six up, six down, then Akron had a single in the fifth, but that runner was stranded at first base. Marvel struck out Donaldson for the first out of the inning, leaving him 0-for-3 in the game against the Curve right-hander.

In the bottom of the fifth, Jin-De Jhang led off with a single. Logan Hill was hit by a pitch to put two on with no outs. After Jordan George flew out to right field, Arden Pabst made it a 5-1 game with a single off of a relief pitcher. Stephen Alemais then walked to load the bases for Cole Tucker.

A second reliever came on to face Tucker, who Akron wanted batting from the right side. It turned out to be a bad decision, as Tucker sent one into the left field bleachers to tie the game. Ke’Bryan Hayes was then robbed of extra bases on an outstanding catch down the right field line and Bryan Reynolds struck out to end the frame.

Cole Tucker ties up tonight's @EasternLeague divisional series playoff game with a grand slam in the fifth inning for the @AltoonaCurve. pic.twitter.com/xbHjVO52Id

In the sixth, Tate Scioneaux replaced Marvel, who put together four shutout innings after his rough first inning. Scioneaux retired the side in order, striking out two batters. The Curve got a single from Jhang in the bottom of the sixth, but nothing else.

The top of the seventh included an infield single and Scioneaux striking out Donaldson. The bottom of the inning include an Alemais single and Tucker hitting one to the wall in right-center field, nearly collecting his third homer of the series.

Blake Weiman replaced Scioneaux and gave a scare in the top of the eighth with a ball hit to the wall in left center. He was still able to retire the side in order.

Ke’Bryan Hayes singled and stole second to begin the eighth. A fly out by Bryan Reynolds moves Hayes to third base, then Will Craig was intentionally walked. He moved to second base on a wild pitch. Jhang was then walked intentionally to load the bases and a fifth Akron pitcher came into the game to face Logan Hill.

Hill hit the ball just soft enough back to the pitcher that Hayes was able to beat the throw home to give the Curve a 6-5 lead. Jordan George (pictured) then followed with a single into left field that scored two runs, with Hill getting thrown out at second base for the second out. Arden Pabst popped out to end the inning, sending it to the ninth with an 8-5 Curve lead.

Matt Eckelman came on for the save and gave up a lead-off single. That was followed by a fly ball to right field for the first out. Another single put two men on base. The game then ended on a liner back to Eckelman, who doubled the runner off of second base.

Tucker went 1-for-4 with the grand slam.  Hayes was 1-for-4 with a run scored and stolen base. Reynolds was 0-for-4 with two strikeouts. Craig was 0-for-3 with a walk and run scored. Alemais reached base all three trips to the plate. Jhang reached in all four plate appearances.

Game four will be tomorrow in Altoona at 4PM with Dario Agrazal on the mound. Akron leads the series 2-1.