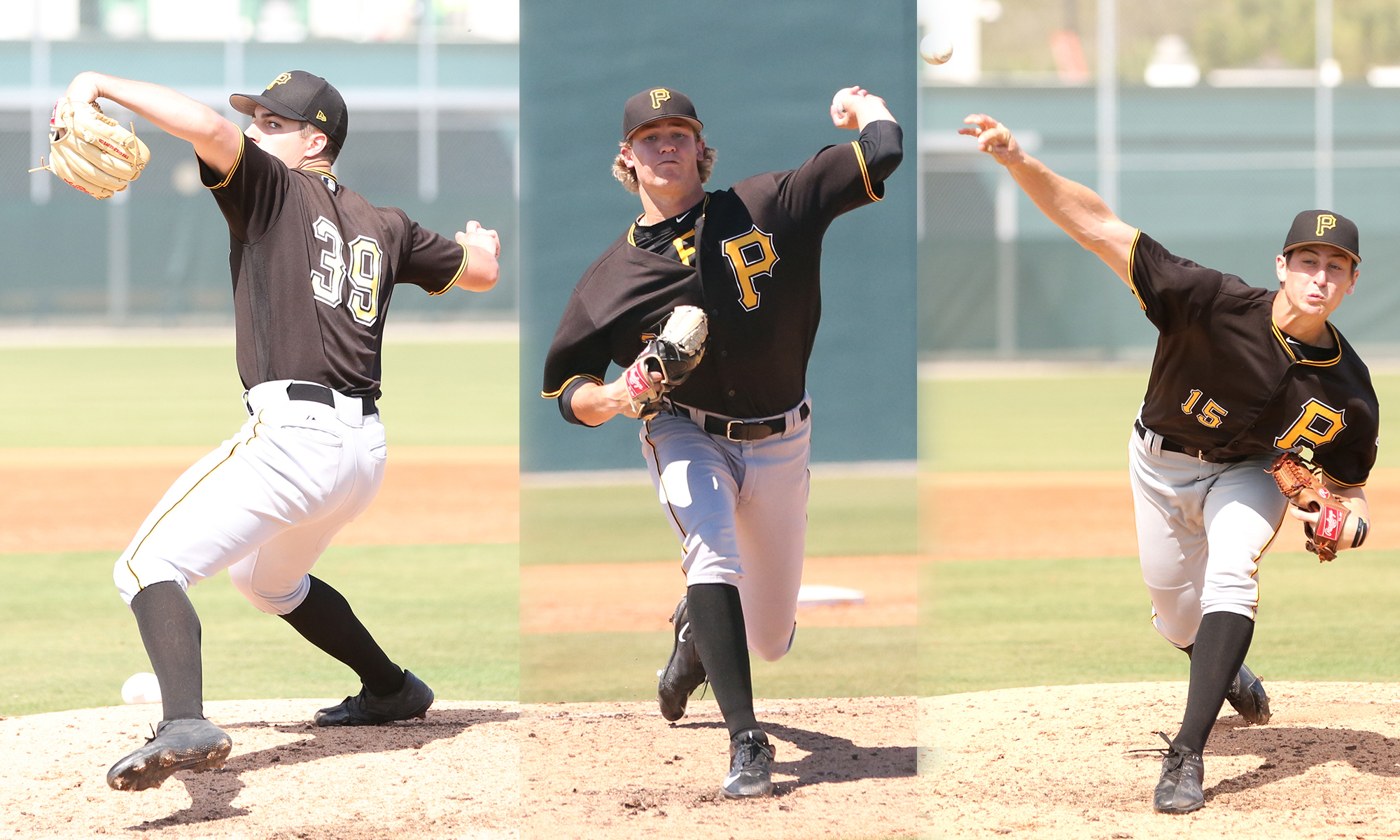 The Pittsburgh Pirates had a strong group of prospects in the GCL in 2017 and Bristol had some very talented young pitchers last year. Those two teams contributed to an exciting group of players in West Virginia to begin the 2018 season.

Expectations were high for the Power this year, in what turned out to be their final year as an affiliate of the Pirates. Next year’s Low-A team will be in Greensboro and it doesn’t appear to be a loaded group of top prospects, but there should be plenty of players worth watching. The 2018 Power had a very young pitching staff, which gained more youth as the season went along. They also had a few of the better hitting prospects in the system and they nearly made the playoffs, losing out on the final day of the season.

The Power used a total of 51 players this season, with the number going that high due to many injuries. They had just one pitcher and one hitter who were active on the Power roster for the entire time from Opening Day until the final game. That left 49 players for the other 23 spots on the roster. Here’s a look at the top players from that large group, as well as everyone else of note. We will post the top ten list prospects list tomorrow.

The top prospect going into the season was Lolo Sanchez and he ended up being the only position player who didn’t get injured or promoted/demoted during the season. That didn’t mean he had a great year, as a slow start led to a final slash line of .243/.322/.328 in 114 games. He played some solid defense and stole 30 bases, so it wasn’t a lost season for the 19-year-old outfielder, but it also wasn’t the breakout year that we expected to see.

The next two highest rated position prospects had strong seasons at the plate. Outfielder Calvin Mitchell and shortstop Oneil Cruz were both 19 years old this year and each had near breakout seasons. Mitchell hit .280/.344/.427 in 119 games and Cruz hit .286/.343/.488 in 103 games before he had a couple of injuries that ended his season early. Mitchell had a lower back/hip injury that temporarily shelved him and possibly contributed to a dip in his stats before he came back and finished strong. Neither of them rates highly on defense, so this is what you wanted to see on offense from them.

The Pirates sent two 2017 GCL infielders to West Virginia who were still 18 years old on Opening Day. First baseman Mason Martin and second baseman Rodolfo Castro rounded out the group of players who received aggressive pushes at the beginning of the season.  It turned out to be too much of a push for Martin, who posted a .636 OPS and was striking out once every three plate appearances. He went down to Bristol, which is where he would have been under a normal progression. Castro posted a .672 OPS in 105 games, spending most of his time at second base, though he did see some starts at shortstop. His stats were about what we expected because he seemed to be the least ready (of this group) for a leap from the GCL to Low-A ball.

After all of the young players, the best prospect on offense was catcher Deon Stafford, who had an up and down season. He was an All-Star in June, then really slumped for a stretch before suffering a concussion that put him out of action for a brief time. When he came back, the early season hitting returned and he finished up with solid numbers at the plate. His defense is still a work in progress, although he got a lot of praise for his work with the pitchers and running the game. Stafford’s injury helped open up playing time for Raul Hernandez, who made the most of it by putting up a .792 OPS in 47 games. He has only been know for his defense up to this point. By the end of the year, they were finding him at-bats, with some time at first base and DH.

Third baseman Dylan Busby had a rough year with two beanings that kept him out for much of the season. He was showing some power before it happened, but just like last year, strikeouts were a big issue. His injury opened up playing time in the infield. Ben Bengtson, who was on the Opening Day roster, couldn’t take advantage of the extra time, but both Brett Pope and Robbie Glendinning played well when they got the chance. Pope ended up getting promoted after just 29 games and spent most of the second half with Bradenton. At the end of the season, 2018 third round pick Connor Kaiser, came up and finished strong in the last 16 games. He replaced Bengtson on the roster, though he was actually filling in for the injured Oneil Cruz at shortstop.

In the outfield, the Pirates made a change late for the playoff run that backfired for the Power. First round pick Travis Swaggerty was hitting well at Morgantown and that led to a promotion to West Virginia. The Pirates decided to send Fabricio Macias down to Morgantown. Macias had a .640 OPS in 40 games, so that seemed like a reasonable move, except that he just had his best week with the team and it carried over a level lower. While Macias put up strong numbers with the Black Bears, Swaggerty finished with a .451 OPS in 16 games, and the Power lost their playoff spot on the final day of the season. Chris Sharpe had an average season, which was a bit disappointing for someone who got an over-slot bonus to sign out of college in 2017.

On the pitching side, I featured (left to right) Max Kranick, Braeden Ogle and Travis MacGregor in the photo up top. They were the three top prep pitchers from the 2016 draft and all of them spent time with the Power, though they all missed time during the season.

Kranick missed his time at the start of the season while he was still down in Extended Spring Training, where the reports were very impressive. They don’t keep stats, but I believe that he only allowed runs in one appearance before he was promoted to the Power. He also missed very brief time (twice) with blister issues after the promotion. When he was on the mound, Kranick had a 3.81 ERA in 78.1 innings, with 77 strikeouts and a 1.15 WHIP. He allowed just five walks in his final 44.2 innings.

Ogle and MacGregor each missed a lot more time due to injury. Ogle had a shoulder issue after his fourth start,  which kept him out of game action for the rest of the season. MacGregor was out early due to a muscle spasm in his right deltoid. He was out late due to a forearm issue. Ogle is currently pitching sim games in Fall instructs, so right now he seems to be on track for a healthy return. MacGregor had Tommy John surgery last week and will miss all of 2019, though he is already down at Pirate City rehabbing his injury.

That group of pitchers was joined by another high profile draft pick out of high school, but this was one from the 2017 draft class. Cody Bolton earned his way to the Power in late May before a forearm injury in his ninth start ended his season early. He was pitching great from the start of Spring Training until the game where he got hurt. In his final healthy start, he struck out a career high nine batters. His forearm injury isn’t as serious as MacGregor’s and he’s expected to begin throwing again in December to get ready for 2019.

The pitcher who did the best wasn’t a draft pick, but he was very young. Lefty Domingo Robles turned 20 years old a month into the season, which didn’t stop him from putting up solid stats. In fact, he ended up making his final five starts in Bradenton, after posting a 2.97 ERA and a 1.25 WHIP in 115 innings with West Virginia.

The other starts came from Gavin Wallace, Hunter Stratton, Ike Schlabach, Oddy Nunez and Sergio Cubilete. In case you were still wondering since the intro up top, Schlabach was the only pitcher who was healthy and on the Power roster from Opening Day through the end of the season. He also pitched the best from this group while flipping between long relief and starting. Wallace made 14 start and looked solid, before going to Bradenton, where he was hit hard. Stratton was able to keep runs off of the board during the second half, though he was constantly in trouble with his pitch counts. Cubilete never really bounced back from taking a line drive to the face in April. He had some nice starts here and there, but no consistency. Nunez pitched terrific in August, though he was only with West Virginia because he pitched so poorly in Bradenton.

In the bullpen, the Power had a lot of interesting arms that could one day turn into something for the big league club. Blake Weiman dominated early on, was promoted to Bradenton where he had a couple of rough outings mixed in with otherwise solid performances, before finishing the season at Altoona. He could be the best in this relief group despite some hard throwers mixed in with him. Beau Susler isn’t a hard-thrower and isn’t young either, but he put up some strong results. There will be questions about his success until he can show it at an age appropriate level.

Samuel Reyes and Joel Cesar get their fastball into the mid-90s and each had success as a reliever this year with the Power. Reyes was converted to a starter late and finished with six shutout innings. Both are inexperienced for pitchers in Low-A, so while they are older than the young pitchers mentioned up top, they could still have room for growth. Blake Cederlind pitched well in West Virginia, then got hit very hard in Bradenton. He went from a 2.86 ERA and 1.06 WHIP in Low-A, to a 7.59 ERA and a 2.11 WHIP in High-A. He also shows mid-90s velocity, though the secondary pitches need work.

The best story from the bullpen was Elvis Escobar, who began the year as an outfielder with Altoona. In June he was put on the disabled list with a phantom injury and the Pirates began converting him to a pitcher. That happened because he wasn’t hitting at all and he pitched in mop up one day where he hit 94 MPH. Escobar would pitch 15 times with the Power, putting up a 2.08 ERA in 26 innings, with 28 strikeouts. That led to him being promoted to Altoona at the end of the season. We will really see this off-season if he impressed enough on the mound because he’s a minor league free agent this winter.