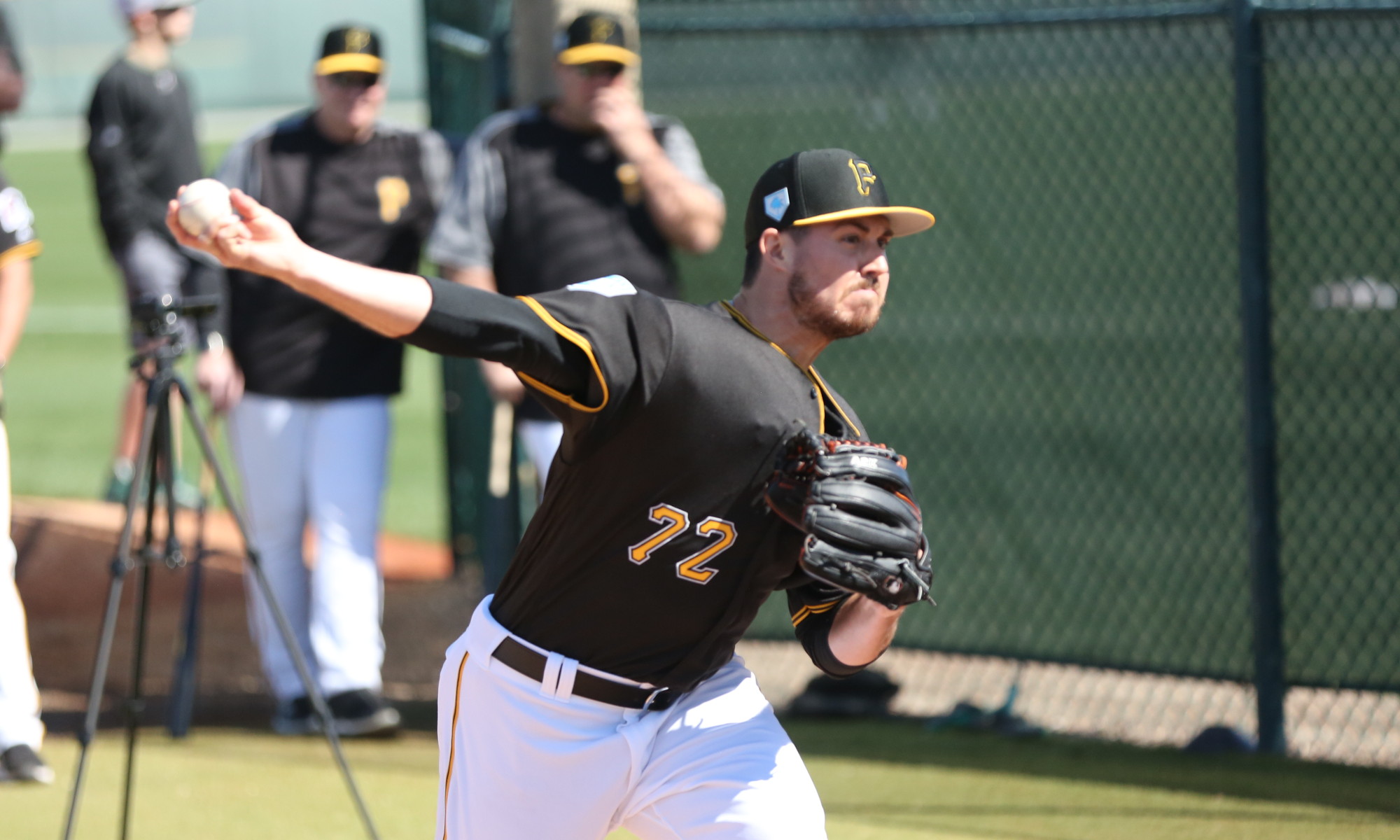 Yesterday I wrote about some signs we could watch for this year — specifically, strikeout rates and, where possible, pitch selection — to see whether the Pirates were changing their approach to fastball usage in the minors, and whether it was having any impact.  Today, something else to watch for:  The team’s efforts to develop relievers.

We’ve seen significant changes to reliever usage in recent years, as teams more and more gear up to rely on their bullpens for 3-4 innings, or even more, and not just where the starter struggles.  The average number of relievers used per team in an NL game has gone from 3.01 in 2013 to 3.40 in 2018.  In the same span, the average innings per start have gone from 5.91 to 5.45, as teams are much quicker to try to shut down the opponent with a power-armed reliever.  (I’m using the NL here due to the DH in the AL, which impacts strategy by eliminating the need to pinch hit for a pitcher.)  We’ve also seen the concept of the “opener” arrive; even the Pirates openly considered it as an option this year if Jordan Lyles didn’t work out.

The Pirates haven’t missed the trend.  There’s a reasonable chance that, even with Edgar Santana out for the season, they’ll have five relievers with shutdown capability who can pitch in the late innings:  Felipe Vázquez, Keone Kela, Kyle Crick, Richard Rodriguez and Nick Burdi.  (Hopefully, Crick gets healthy and Burdi continues to improve his command.)  That’s a lot of arms, though, and to maintain a steady supply of them, they’ll need to develop some of their own.  They can’t count on guys like Rodriguez and Burdi falling into their laps on a regular basis, and they’ve made clear they’re not going to spend meaningful money on veteran players of any sort, much less relievers.

That’s where the Pirates have been a puzzle.  In over 11 years, the current front office has signed and developed exactly two successful relievers:  Justin Wilson and Santana.  (Tony Watson and Jared Hughes were already in the farm system when Neal Huntington became GM.)  I don’t know why that’s the case.  I can think of several possible factors.  The team has been so determined to develop starters that it’s been reluctant to convert starting prospects to the bullpen, which is what happens with most good relievers.  The Pirates also have placed heavy emphasis on sinkerball pitchers who generate groundballs and haven’t focused as much on the fastball/slider type pitchers who generate a lot of swings and misses and, thus, make good late-innings relievers.  And the Pirates’ obsession with veterans for their bench may also extend to the bullpen.

But things appear to be changing.  To begin with, the Pirates seem much more inclined to move starters to relief, something they’ve had little success with since Wilson back in 2013.  Right now, they’re trying Nick Kingham, Steve Brault, Luis Escobar, Clay Holmes and Brandon Waddell in relief.

The Pirates also seem to be trying to develop pitchers as relievers from the start of their careers.  If you peruse their minor league rosters, especially at the class A level, from about 5-6 years ago, you’ll generally find that the handful of real prospects were all in the rotation.  The bullpens were made up mostly of organizational pitchers, with more or less the same sorts of repertoires as the starters, but who simply weren’t good enough to be in the rotation.  This was probably typical of most organizations.

Now all of the Pirates’ affiliates, at least the ones in action at this point, have quite a few pitchers who’ve projected from the start as relievers.  For the most part, these are guys with power arms, usually without the third pitch needed to start, or even with a dubious second pitch, and often without the command to get through more than an inning at a time.

Apart from Holmes and Waddell, Indianapolis has Geoff Hartlieb, Dovydas Neverauskas, Michael Feliz, Jesus Liranzo and Montana DuRapau.  Neverauskas and Feliz moved to relief in the low minors; the others were relievers all along.  All but DuRapau have power stuff — Hartlieb, Neverauskas and Liranzo have all hit triple digits — and various issues, mostly related to command and control.  DuRapau has a history of missing bats thanks to a cutter.

Altoona is temporarily missing two of its most promising relievers, both lefties, due to injury.  Blake Weiman has more of a starter’s repertoire, but has been a reliever since college due to stamina issues.  Elvis Escobar moved from the outfield to the mound last year when the Pirates discovered he throws in the mid-90s.  The Curve also has Yeudy Garcia, Angel German and Jacob Brentz, all of whom have struggled to get their power offerings over the plate.

Escobar was a starter until this year, which he’s opened at Bradenton.  He has the stuff to be a dominant reliever at the major league level if he can just command it adequately.  Blake Cederlind hit triple digits a number of times last year.  The Marauders also have Joel Cesar and Drew Fischer, who both have a history of missing bats.

Finally, Greensboro has some real lottery tickets.  Shea Murray and Nick Mears both have very good arms but limited experience.  Logan Stoelke used a cutter to dominate New York-Penn League hitters in his debut last year.  And Conner Loeprich also put up very good strikeout numbers in his debut, pitching in relief in the NYPL.

Of course, it’s quiet possible that not a single one of these pitchers will become a successful major league reliever.  It’s worth watching, though, because getting even a couple of good major league arms out of this group will be very helpful to the Pirates in the near future.

Today’s Starter and Notes: The Pittsburgh Pirates were off on Tuesday. Jordan Lyles will make his second start of the season today. He threw five shutout innings in his season debut. The Cubs will counter with Yu Darvish, who has an 8.10 ERA and a 2.70 WHIP in 6.2 innings over two starts.

The minor league schedule includes three early games, with Altoona, Bradenton and Greensboro all getting under way by 12:05 PM. There will be four top 50 prospects on the mound today, led by JT Brubaker for Indianapolis getting the only night start. Aaron Shortridge, Steven Jennings and Dario Agrazal are all making their second starts of the season.

From Altoona on Monday night, Bligh Madris hits his first home run of the season

Bligh's 💣 starts a four-run rally and we're up 4-1 in the fourth pic.twitter.com/YEoAwJMWor

There have been six former Pittsburgh Pirates players born on this date, including two players who won World Series rings with the team. Outfielder Lee Lacy signed with the Pirates as a free agent in January 1979 and was used mainly off the bench that first season, where he hit .247/.327/.412 in 84 games. Lacy lasted with the Pirates until 1984 and played a total of 1,523 games during his 16-year career.

Joe Gibbon was a rookie pitcher for the 1960 Pirates. He made nine starts and 18 relief appearances that season, posting a 4.03 ERA over 80.1 innings. He pitched twice during the World Series against the New York Yankees and allowed three runs over three innings. Gibbon pitched with the Pirates until he was dealt in a 1965 trade with the San Francisco Giants that brought Matty Alou back to Pittsburgh. Gibbon returned to the Pirates in another trade with the Giants in 1969. He pitched two more seasons in Pittsburgh and made two appearances during the 1970 playoffs.

Also born on this date, Howard “Howdy” Groskloss, infielder for the 1930-32 Pirates. He went right from college at Amherst to the big leagues, though the Pirates weren’t quick to use him that first season. He was far at the end of the bench, playing just two games that first year. He saw a decent amount of playing time in 1931, but was used strictly as a pinch-hitter for the first 153 games of the 1932 season, and even then only batted 16 times. Finally, in the last game of the year, the Pirates gave him the start and he went 0-for-4 with an error. That ended up being his last Major League game. Groskloss is one of just a few former Pirates to live to 100 years old. Prior to his passing in 2006, he was the oldest living former baseball player.

Other players born on April 10th include:

On this date in 1962, the Pirates opened up their season with a 6-0 win over the Phillies. Bob Friend started and went the distance for the complete game shutout. Roberto Clemente drove in four runs. This was the 81st season in franchise history and the first time they opened the season on April 10th. You can view the boxscore here.