After an On Field Incident, Tito Polo is Just Looking for a Second Chance at Pro Ball 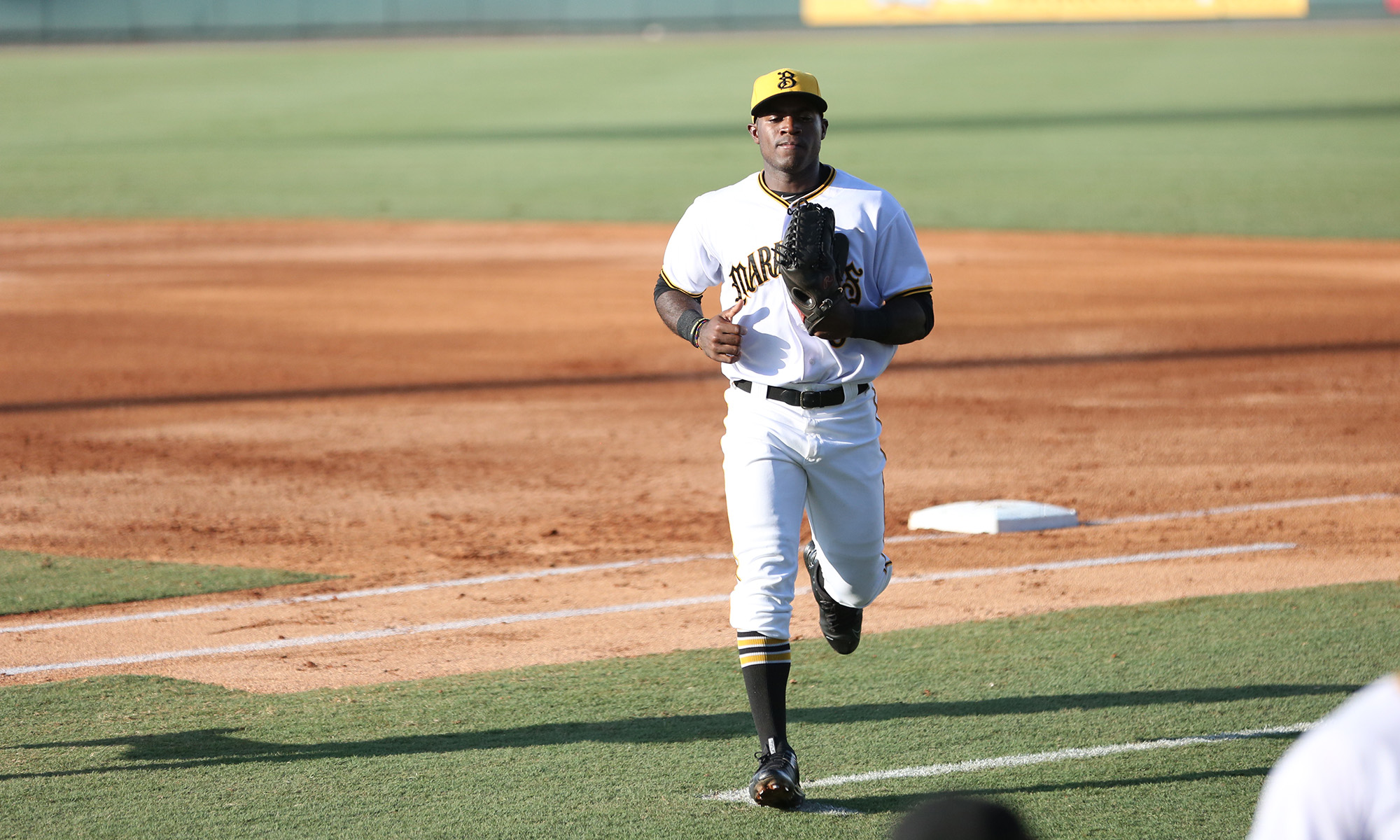 When the Pittsburgh Pirates signed Tito Polo for $25,000 out of Colombia in early 2012, it was his name that drew the most attention. By the 2013 season in the Dominican Summer League, he was making a name for himself with his play on the field. Now 24 years old, Polo is just looking to clear his name after an unintentional on field incident cost him his job last month.

We began to get strong reports on Polo during that 2013 season. His numbers fell off near the end of the year due to a recurring hamstring injury that limited his playing time and effectiveness when he tried to play through it. People who saw him regularly still said he had a chance to be a five-tool player, with his power, speed and defense all being above average.

After playing winter ball in Colombia alongside much older players, Polo went to the GCL in 2014, where he was able to show what he could do during a healthy season. He hit .291/.374/.475 in 44 games. Not only was he healthy, but getting first live looks at him, we saw that he was in amazing physical condition. Listed at 5’9″, 185 pounds, Polo was one of the best conditioned athletes that we have seen in the system, and still is to this day. He put in the hard work training and it was beginning to pay off with success in the U.S.

In 2015, we predicted that he had the potential to be a breakout prospect in the system. We jumped the gun a little there, as he got the push to Low-A ball from the GCL, but he posted a .641 OPS in 102 games. He showed off that plus speed though, stealing 46 bases.

If we waited one more year to pick him as a breakout prospect, then the prediction would have looked much better. In 2016, the 21-year-old Polo hit .302/.368/.551 in 54 games with West Virginia before the All-Star break. After playing in the South Atlantic League All-Star game, he was promoted to Bradenton. His stay there lasted until the 2016 trade deadline when he was sent to the New York Yankees in the Ivan Nova deal. Polo was actually the player to be named later in the deal, so he saw limited time with the Yankees in 2016 after the trade was finalized.

At that point is when we stopped covering him on the site. I had talked to Polo numerous times while he was in the system and many times after he was traded, but I didn’t think about writing an article on him until after what happened last month while in Triple-A with the Seattle Mariners.

Polo didn’t last long with the Yankees. By mid-2017, he was traded to the Chicago White Sox in a seven-player deal that included Todd Frazier and David Robertson. Polo had some injuries with the White Sox that landed him on the disabled list four times and limited him to 74 games over 1 1/2 seasons. He reached minor league free agency this winter, but signed with the Seattle Mariners after a solid showing in winter ball in Venezuela and got an invite to big league camp. Polo batted .348 during Spring Training and was assigned to Triple-A.

Just ten games into the 2019 season, there was an incident where Polo was running down the first base line trying to beat out a grounder. He ended up unintentionally spiking El Paso first baseman and another former Pirate prospect, Alex Dickerson. Just a day later, there was talk of a suspension to Polo, and two days later he was released.

It’s now been a month since the incident and Polo has spent that time trying to clear his name and get back into pro ball. I read a post on Facebook from him about his situation, then reached out to him to get his side of the story.

From the start, the whole situation sounded like an over-reaction by the league and the Mariners to release him. While he was with the Pirates, there was nothing but praise for Polo as a person and for his work ethic. There hasn’t been anything similar to this is the past, yet his career has been derailed by one play where he is being punished by playing the game hard.

So here, in his own words, is an explanation from Polo, on what happened that day, what has happened since, and how at age 24, he is looking for a second chance to get back in pro ball.

My name is Tito Polo and I feel extremely affected by what happened. It was an accident and now my career is changing. It was never my intention to hurt a colleague.

The situation happened in Texas after I hit a grounder and sprinted to first base. When I was running I was trying to run as fast as possible. My mistake was running with my head down and I ran a bit off the baseline. As I continued, I ended up being too close to the inner part of the bag and I stepped on the first baseman.

I could never hurt another player, it was sincerely a mistake. Right after, I turned around and put my hand to my heart and immediately felt guilt. Right away I wanted to check on him and ask him if he was okay. However, I saw the other players from the opposite team coming my way and my coach told me to go into the dugout to prevent a fight from breaking out. It was something that happened so quickly and without a bad intention but a huge mistake on my part.There was never an exchange of words (cursing back and forth) or anything as some reporters have claimed.

My coach eventually pulled me out of the game as a cautious manner to prevent any pitchers from trying to hit me. At the end of the game I expressed to my manager the regret of what happened and wanted to talk to the player and his team to explain and mainly apologize. I spoke with the manager of El Paso and I told him that it was not malicious. I ran the base very badly and it was very unfortunate to hurt the opponent. I really do not have a problem with anyone. I play baseball to have fun, it brings me joy. It’s a part of me, what I love to do.

When I arrived at the stadium the next day the manager pulled me a side and we talked. He told me that the player would not accept my apologies and I accepted he was hurt, and that eventually over time he might accept it.

The manager told me that the league will suspend me for a few days. Then at the end of the practice, the manager calls me again and tells me that the team has released me for what happened. The league told my team that if they did not do something in 24 hours that they would take action.

The Mariners released me to give another team a chance to pick me up, since they weren’t sure if I was going to be suspended from the Pacific Coast League for the whole season. It turns out that they suspended me for 25 games.

As of now I have completed that suspension. This whole time I have been unemployed and have been getting a tremendous amount of backlash from reports here in the US and especially in Colombia claiming I am indefinitely suspended and saying things such as my career is over.

I am already extremely upset for what this mistake has taken from me. And to hear all this negative talk about my name has really crushed me. I am extremely shocked that so many people really think of me in this way. I would never hurt someone purposely just get safe on a base versus a simple out. I do not play dirty. I take a lot of pride in my work.

We are human beings and we make many mistakes. I have been on three teams and I have always been characterized as a leader and have good communication with everyone from all my colleagues and my managers. I have apologized to my team in Tacoma and my coaches for putting them in this situation, and when I was saying goodbye some had tears in their eyes because they know me as a person and couldn’t believe what was happening.

I want the opportunity to clean my name and continue doing good and show that I’m not the ballplayer they think. We all deserve a second chance and I feel that my career has been knocked down. They did not give the Seattle team a choice and they threw me out saying they would suspend me indefinitely if no actions were taken.

I understand that my action was bad, but this punishment is too drastic. Especially for my first offense. Never have they had any negative behavior from my part. And I feel that I have given my all for years and they know me very well as a person and something like this has never happened.

Now I do not understand how they could think that this incident could have happened on purpose and in retaliation. It was just an accident and my bad luck was that it was with the same team to which there was little problem a few weeks back when a different first baseman had gotten in the baseline and was pushed when I ran the base. They ended up saying that it was his mistake and not mine. Simple mistake, we continued playing, no hard feelings on both of our parts were taken.

Then after that was when my mistake happened. I know how they could see this as me wanting to get back at him, but it is not at all like that. I come to play not to fight. I don’t hold grudges and I’m not an angry person, and I give you my word that the situation was not with any intention.

As of now I am still unemployed and am not currently with any team. I feel like the whole course of action as well as negative information from reporters has cause teams that were interested in me to slow down and slightly back off.

I want to thank you so much for giving me the opportunity to tell my story. When you’re down there seems to be a lot a negativity, but not many are willing to help others get back up.