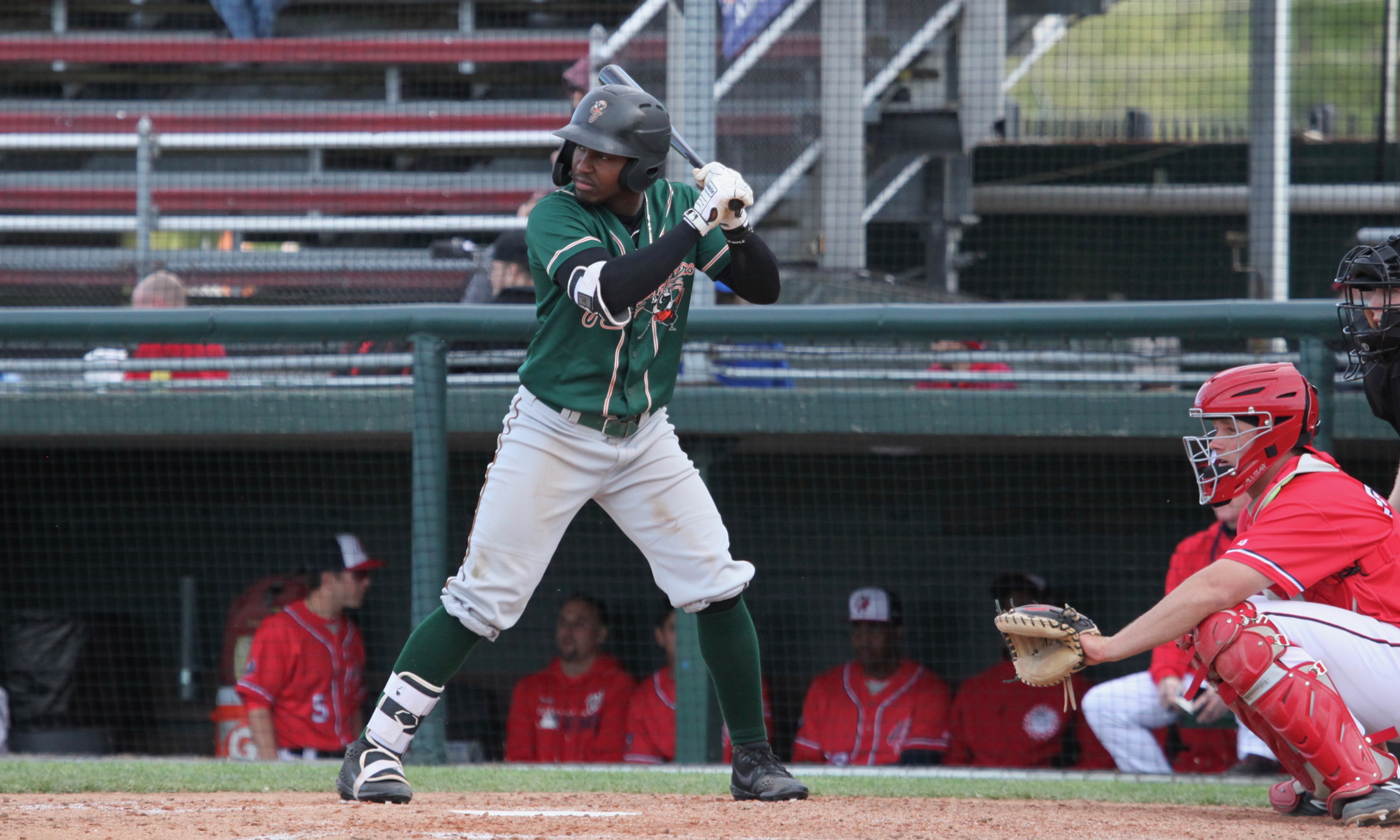 With the season nearing the two-month mark, it’s a good time to look at the prospects who’ve stepped up and the ones who haven’t.  We’ll start today with Greensboro and take a look at three players who’ve been pleasant surprises and three who’ve disappointed.  I’m not going to include players who’ve already been promoted, like Nick Economos and Nick Mears, both of whom would have been candidates for the surprise part.  Stats are through the games of May 28.

Repeaters:  OK, I’m cheating a bit to get some extra players in.  The Pirates sent three of last year’s regulars back for another season in the South Atlantic League:  outfielder Lolo Sanchez, first baseman Mason Martin and second baseman/shortstop Rodolfo Castro.  (Martin isn’t quite in the same category as the other two as he played only 45 games at West Virginia last year before getting demoted to Bristol.)  All three struggled last year and all three have broken out in a big way this year while still being a good age for the level.  They all rank in the SAL’s top seven in OPS.

Sanchez is batting 329/407/506.  His walk rate is very low – just 6% of his plate appearances – but he’s also making even better contact than last year, with his strikeout rate dropping from a very reasonable 16% to just 11%.  He’s being helped by a high batting average on balls in play of .356, but for a player with his speed that may well be sustainable.  (Starling Marte’s career BABIP, for instance, is .343.)  Sanchez does need to work on his base stealing technique; he’s second in the SAL with 18 steals, but he’s leading the league (by three) in times caught with nine.

Martin and Castro have been putting up big power numbers, ranking second and third in both home runs and slugging percentage.  Martin is hitting 262/355/590 and Castro 269/318/581.  Strikeouts remain a significant issue.  Martin is fanning in 33% of his plate appearances.  That’s a slight drop from his 36% mark at the same level last year and he’s trending downward, as his rate has been 30% in May.  On the plus side, Martin is walking at a solid 12% rate.  Castro, with a 27% strikeout rate, is actually striking out a little more than last year.  He remains an impatient hitter, walking in only 6% of his plate appearances.  Both have had some issues with errors and need to gain more consistency on defense.

Brad Case, RHP:  Case may be the biggest surprise in the entire system.  He’s not overpowering, with a K/9 of just 6.8%.  Opponents are batting only .197 against him, though, and he walks just about nobody; only two batters in 61 innings.  His WHIP is an extremely low 0.77 and his ERA is 2.21.  In ten starts, he’s allowed more than two earned runs just twice (three once and four once), and allowed none four times.  He’s looking like a very good find for the 17th round of the draft.

Ji-Hwan Bae, SS:  Bae has played in only 11 games so far, but I’m listing him in part because it’s a mild surprise he’s in Greensboro at all.  It seemed like it could have been a maneuver to trigger his suspension for domestic abuse early, but the Pirates returned him to Greensboro after he was activated.  (There’s no basis for thinking that the Pirates would make light of such a serious issue.)  Bae has gotten off to a very fast start, hitting 320/358/420 despite making the jump from the Gulf Coast League.  He hasn’t turned 20 yet.

Apart from the players listed above, a few other Greensboro players are making some noise and bear watching.  Outfielder Fabricio Macias has completely turned his season around after a dismal 132/213/294 showing in April.  In May, he’s hitting 375/411/591.  Right-hander Osvaldo Bido would have been on the list above, but he’s gotten banged around in three of his last four starts.  He’s still having a very good season overall, though.  Finally, right-handed reliever Yerry De Los Santos, who recently emerged from extended spring training, has been impressive in limited action.  He hit a bump in his last outing, giving up a pair of longballs, but he’s fanned 13 of the 31 batters he’s faced.

2018 Draftees:  The Pirates focused heavily on college hitters in the earlier rounds of the 2018 draft and, so far, the results aren’t good.  All of the college hitters they drafted in the first 15 rounds, except Travis Swaggerty and Daniel Amaral, are at (or recently were at) Greensboro.  Low class A is a level where you’d expect a college player to dominate, but it’s been quite the opposite.  Connor Kaiser (3rd round) has played good defense at short and drawn a lot of walks, but drawing walks at this level, by itself, isn’t a skill that repeats well at higher levels.  He has just a .670 OPS overall.  Zack Kone (13th) is struggling even more at .578.  (Kone is currently injured and Kaiser has just returned from an injury.)  Grant Koch (4th) has shown signs of life recently, but he’s an offense-oriented catcher whose OPS is still only .648.  Infielder Mike Gretler (10th) got moved down from Bradenton, where he was struggling, and is managing only a .605 OPS for Greensboro.  Outfielder Brett Kinneman (7th) has been worse than any of those four, with a .554 OPS and strikeouts in 35% of his plate appearances.  In fact, he’s been so bad he was just demoted in favor of Jack Herman.  Worst of all has been Jonah Davis (15th), who’s coming off an impressive debut at Bristol.  He recently got sent back to extended spring training with a .461 OPS and strikeouts in 43% of his plate appearances.  Things don’t get a whole lot better with some of the pitchers, as Michael Flynn (6th) and Zach Spears (8th) are still in extended spring training.  This draft class so far has made a very disappointing showing.

Steven Jennings, RHP:  A second round pick in 2017, Jennings was still getting good grades from scouts coming into this season despite a weak showing at Bristol last year.  Things haven’t gotten any better, as Jennings has a 6.11 ERA and 1.60 WHIP.  Opponents are batting .301 against him.  He is striking out a batter an inning, which is something positive.

Braeden Ogle, LHP:  Ogle hasn’t been terrible this year.  His ERA is 4.37, but his WHIP is solid at 1.24 and he’s striking out 9.9 per nine innings.  Whatever he allows sometimes seems to come all at once, which is why his xFIP of 3.79 is a bit better than his ERA.  The bigger disappointment was the Pirates moving him to the bullpen after just two starts.  This appears to be a workload management move, as Ogle threw just 17 innings last year and 43 the year before.

Altoona is in fourth place in their division, nine games back with 20 games remaining in the first half.

Bradenton is in second place in their division, one game back with 18 games remaining in the first half.

Greensboro is in second place in their division, six games back with 19 games remaining in the schedule.

Today’s Starter and Notes: The Pittsburgh Pirates won 7-2 over the Cincinnati Reds on Wednesday afternoon. They now return home to take on the Milwaukee Brewers for four games. The Pirates are sending out Joe Musgrove in the opener. He gave up six runs over five innings against the Los Angeles Dodgers five days ago. His previous start was three runs over 6.1 innings versus the San Diego Padres. The Brewers will counter with veteran right-hander Chase Anderson, who has a 3.25 ERA in 27.2 innings, with 29 strikeouts and a 1.34 WHIP. After missing three weeks due to injury, he returned on May 18th and threw four innings with one unearned run against the Atlanta Braves. That was followed by three runs over four innings in his start against the Philadelphia Phillies on Friday.

The minor league schedule includes a doubleheader for Altoona. In game one, the Curve will send out James Marvel, who has allowed three runs over his last 12.2 innings, which was after he gave up 14 runs in ten innings during his two previous starts combined. No starter has been listed for game two yet. Cody Bolton gets the start for Bradenton. He allowed two runs over six innings in his last start, while tying his season high with eight strikeouts. Bolton ranks fourth in the Florida State League in ERA (2.03), fourth with 52 strikeouts, and third with an 0.95 WHIP. Pedro Vasquez will make his second appearance for Indianapolis. In his first time out, he allowed eight runs over 3.1 innings. Steven Jennings goes for Greensboro. In five May starts, he has a 4.50 ERA. That’s compared to a 7.89 ERA in five April starts.

From Indianapolis on Tuesday, Will Craig hitting his 15th homer and Will Craig playing defense

104 mph off the bat from #PabloPower!

He's got 10 hits in his last 20 ABs, and more importantly, it's now a 3-2 ballgame!#RollTribe pic.twitter.com/IxhWrrROAB

Three former Pittsburgh Pirates players born on this date, plus two trades of note. The two older players born on this date were pitcher Al Mamaux (1913-17) and 1912 outfielder Mike Donlin. Mamaux was a highly touted pitcher out of college. By his third year in the big leagues, he won 21 games for the 1915 Pirates and threw eight shutouts. By 1917 he had fallen out of favor with the team due to condition and off-field issues and was traded to Brooklyn before the 1918 season. Donlin was one of the best hitters of his day, but he cared more about money than playing baseball, so when his acting career began to pay more, he quit the game. He was a .333 career hitter in 1,049 games. The third player born today is someone everyone knows about, Tony Watson.

The two trades the Pirates made on this date occurred in 1912 and 1925. The first one saw the Pirates deal away long-time star Tommy Leach and pitcher Lefty Leifield to the Cubs for pitcher King Cole and outfielder Solly Hofman. It ended up being a one-sided win for the Cubs, as the Pirates got little from either player they acquired. The 1925 trade saw first baseman Al Niehaus being dealt for pitcher Tom Sheehan. This deal was made possible by the signing of veteran Stuffy McInnis, which was covered in yesterday’s Morning Report. McInnis outhit Niehaus and Sheehan was a valuable reliever for the Pirates team that went on to win the World Series.

On this date in 1925, the Pittsburgh Pirates collected 32 hits during a doubleheader sweep of the Cardinals. In the second game, the Pirates set a Major League record (since 1900) with eight triples in one game. The 1894 Baltimore Orioles had nine triples in a game. Game two was the first game ever managed by Rogers Hornsby and game one was the last game ever managed by Branch Rickey. You can read more about these games in the link above. The boxscores can be found here: Game one Game two