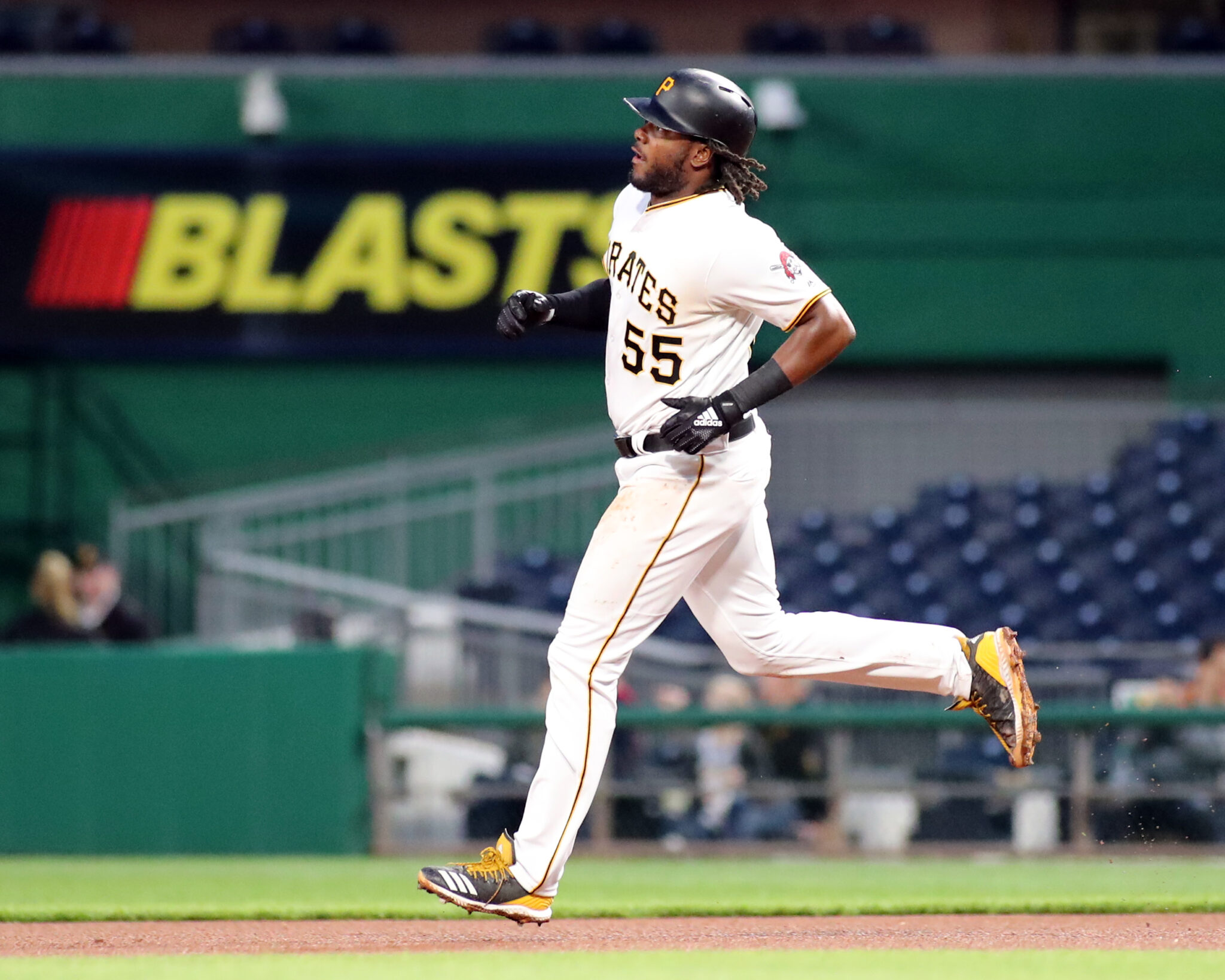 Every Monday I track the MLB playoff odds around the entire National League, getting a feel for where the Pirates are projected in the various systems. I don’t always publish the numbers, as they don’t see a lot of big changes from week to week at this point in the season.

The Pirates did have a massive drop in their chances a few weeks ago, due to their week-long losing streak. That took them from an average 33.7% chance of the playoffs, and the 8th best team in the NL, to a 13.5% chance and the 12th best team by the projections.

Two weeks later, not much has changed. The Pirates are at 13.7% for their average odds across FanGraphs, Baseball Prospectus, Clay Davenport, and FiveThirtyEight. That puts them as the 11th best team in the projections. They took a slight slip the week before, and made up for that last week, but haven’t come close to making up the lost ground from a few weeks ago.

Those playoff odds seem a little strange if you just look at the Pirates and their 20-17 record. If the season ended today, the Pirates would be in the Wild Card game against the Brewers, playing at Milwaukee, based on winning percentage. But these are projections, and they’re based on what the systems think will happen going forward.

For example, the Dodgers are 27-16, with two teams behind them having a .537 winning percentage. Yet they’ve got an average 94% chance of making the playoffs, which is almost 30 percentage points higher than any other team in the NL. The projections think they will continue winning, and are a near-guarantee to make the post-season.

Meanwhile, the Nationals are 16-24 and in fourth place in the AL East, along with having the second-worst record in the NL. Their average projection is 23.4%, which is almost ten percentage points higher than the Pirates. The projections have the Nationals doing much better going forward, finishing around .500.

The projections aren’t going to be absolutely correct. They’re projections. They focus on what is most likely to happen, based on what we know, but all of that can change. A team can have a good week or a bad week. A player can return, or another one can go down with an injury.

The simple thing to do is win as much as possible. That’s not very deep, but it’s true. If you keep winning, you’ll inevitably beat some teams that the projection systems had you losing to. The Pirates took a big drop a few weeks ago because they lost several games that they were projected to win, and haven’t bounced back from that with enough corresponding unexpected wins.

That makes the next month important for the team. They have seven games this week on the road against the Diamondbacks (38.3% playoff odds) and the Padres (19.4). They return home for three games each against the Rockies (9.7) and Dodgers (94), then get the Reds (7.5) for four games on the road.

That is followed by a two-week stretch where they play the Brewers (51.5) and the Braves (39.2) seven times each. I’m not sure who came up with that schedule to play two teams exclusively over a two-week stretch, but at least they get three games against the Marlins (0.0) at the end of it.

Most of those teams are projected ahead of the Pirates. If they’re going to start making up ground, this is a good time to make that happen. It will help to get Chris Archer back this week, with the hope that his first three starts were legit, and his last two were due to injuries. It also helps that the Pirates have seen an above-average offense the last two weeks, rather than bottom of the league like the first month of the season.

This team was built on pitching, with not much expected from the offense. The pitching has faltered lately, which is a good time for the offense to step up. If the pitching can start to get back on track, and the offense can continue playing better than before, then that’s a good recipe for the Pirates to make up some of the ground they lost.

I’m on the road today, heading down to Bradenton, where I’ll have a bit of coverage in between taking care of some house projects. I’ll also be fixing the current site issues involving resetting passwords and making sure everyone’s member information is accurate.

I took the paywall down today while I’m on the road, so everyone can access the site. I’ve got a few fixes for the most common issues, but I don’t want to upload those until I’m available to make sure they are working correctly. If you emailed and I haven’t gotten back to you yet, I’ll be working on that tomorrow, with my goal being to get back to everyone by the end of the day.

Today’s Starter and Notes: The Pittsburgh Pirates won 10-6 over the St Louis Cardinals on Sunday afternoon. The Pirates now travel to Arizona for three games against the Diamondbacks. Nick Kingham will get the start tonight in game one. He made his first start of the season on Wednesday when he allowed two runs on three hits and three walks, with five strikeouts in four innings. Kingham faced the Diamondbacks on April 24th and allowed three runs over two innings. Arizona is scheduled to send out 27-year-old lefty Robbie Ray, who has a 3.30 ERA in eight starts. In 43.2 innings, he has 55 strikeouts, a .210 BAA and a 1.28 WHIP. Ray threw 5.2 shutout innings, striking out 11 batters, against the Tampa Bay Rays on Wednesday.

The minor league schedule includes three games today. Altoona will send out Pedro Vasquez, who has allowed 0-2 runs in five of his six starts this season. His 2.73 ERA leads Altoona starters. Greenboro’s Nicholas Economos is averaging 12.7 strikeouts per nine innings, which is tops among all starters in the system. The Grasshoppers were rained out yesterday and will make up the game in June. Bradenton had off yesterday after a doubleheader on Saturday. No official word yet on their starter, but it’s Cody Bolton’s turn in the rotation. Indianapolis has off today. They were rained out yesterday and the game won’t be made up on the schedule until mid-August.

From Greensboro, a spot on MiLB Twitter for Brad Case, who allowed one hit over seven shutout innings on Saturday

. @Pirates prospect Brad Case (@brad_queso) was perfect through six and gave up one hit over seven scoreless innings for @GSOHoppers.

Hunter Owen has looked better defensively this season at third base. While he isn’t a Gold Glove candidate like this tweet suggests, he is doing very well early on

We may need to keep the @MiLB Gold Glove for third basemen here in Altoona.@Hunter_Owen11 picks a sharp grounder and starts a inning-ending double play. pic.twitter.com/teuNs8nahr

Three former Pittsburgh Pirates players born on this date, plus an intriguing pitching match-up from the early days of the franchise. The players born on this date include catcher Jack Shepard (1953-56), pitcher Frank Miller (1916-19) and catcher Jimmy Archer, who played for the Pirates in 1904, and then again 14 years later as a teammate of Miller. Shepard played two games in 1953, then increased that game total each year until he played 100 games in 1956. In February of 1957, he retired to pursue a career in business. Shepard briefly returned as a minor league manager for the Pirates in 1959 before retiring from baseball for good.

On this date in 1892, pitcher Elmer Smith of the Pirates lost 6-1 to Cy Young, who made his debut two years earlier. This was one of the last starts for Smith, who became a full-time outfielder in 1893 and made up one of the best Pirates outfields ever that season. Smith won 34 games in 1887 as a teenager, but just three years later, he was in the minors. The Pirates gave him a chance to start 13 games in 1892 before converting him full-time to the outfield. With the Pirates, he hit .325/.415/466 and stole 174 bases in seven seasons. Cy Young went 3-2 against the Pirates in 1892.

On this date in 1960, Dick Groat went 6-for-6 with three doubles in an 8-2 win over the Milwaukee Braves. Dick Stuart homered in this game, his first of the season in the 25th game of the year. He would end up with 23 homers that season.