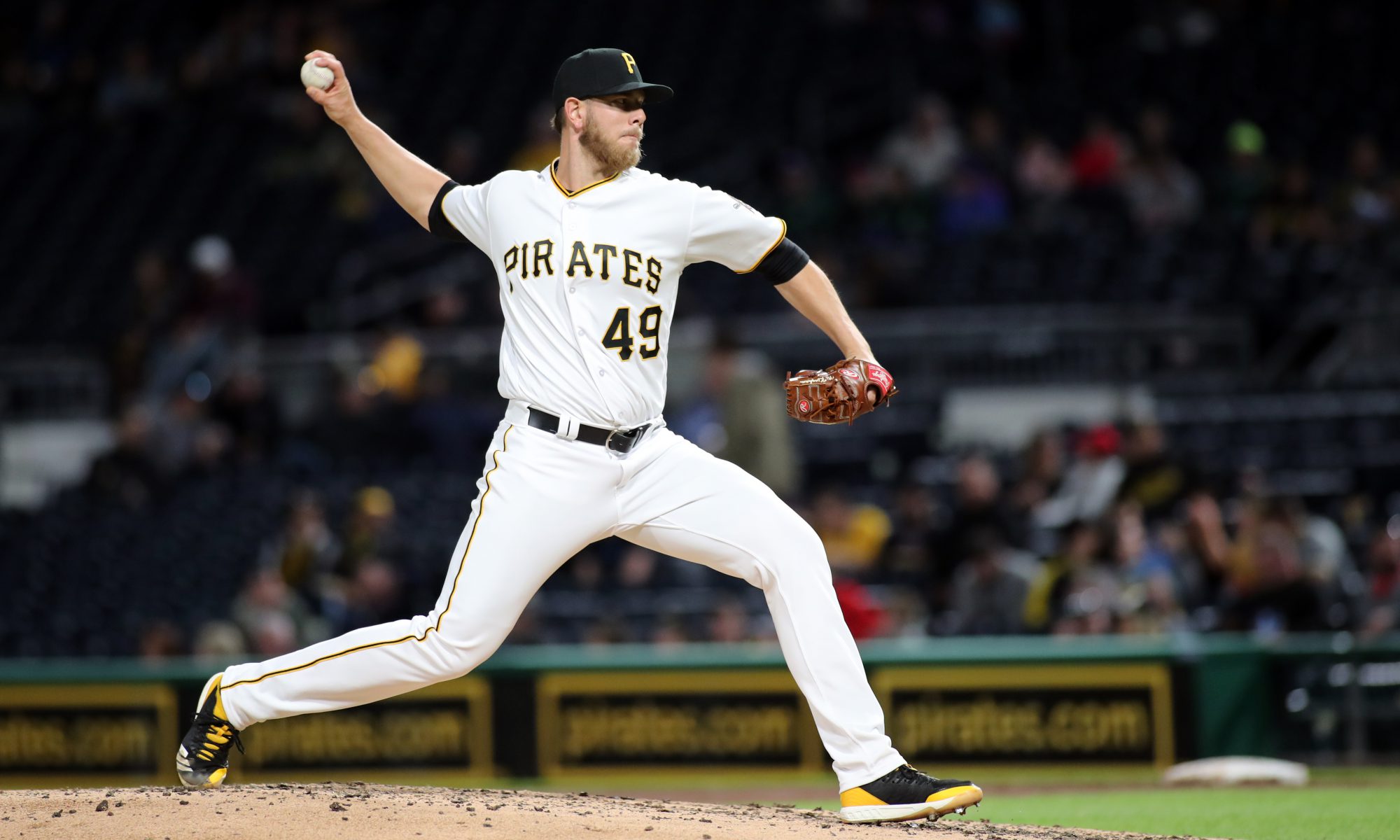 The Pirates are already seven starters deep in their rotation this year, turning to Nick Kingham and Steven Brault now that their top two starters — Chris Archer and Jameson Taillon — are down with injuries.

That will change a bit this week, as Archer is set to return tomorrow, which will move one of Kingham or Brault back to the rotation. With the way both pitchers have performed so far, that decision on who will move is a difficult one, and not in the good way where you’re choosing between two productive pitchers.

The interesting thing about both pitchers is that they’re making a similar adjustment, throwing their fastballs less this year, and throwing their breaking stuff more often.

Both pitchers are following the trend around the league of throwing fewer fastballs in exchange for more breaking stuff. That trend is typically rooted in the idea that you want to throw your best pitches more often, and your best pitch tends to be a breaking pitch, especially in today’s league where batters are hunting fastballs.

I don’t know what to think of these results. For one, they’re a small sample size. But the previous results would indicate that Brault would do well throwing his changeup and slider more often, yet every single pitch he has is getting crushed. Perhaps a deeper dive would reveal what is going on, but I don’t think it’s a simple fix for Brault.

I think the opposite could be said for Kingham.

When Kingham was coming up through the minors, he threw a curveball and a changeup for his secondary pitches. He’s added a cutter more recently, and he’s now throwing that as his second most used pitch.

The problem so far is that the cutter has been getting hit hard, with a 1.198 OPS, making that his second worst pitch this year behind the changeup, which has a 1.343 OPS. His changeup had better results last year, and I don’t have an immediate answer on why it is struggling this year.

There is something that stands out, and that is his curveball. The curveball has a .486 OPS against, and is the pitch he uses the least. That pitch had a .469 OPS against in the majors last year. Coming up through the minors, I felt the curveball was his best secondary pitch, although there was a difference in opinion here at times, as I talked with some scouts who said the changeup was better, while still praising the curveball.

At this point, the curveball is performing better, which makes you wonder why it’s his least used pitch. That question gets raised even more when you see that his four-seam fastball has a .554 OPS against. You not only want to throw your best pitches more often (in this case, the curve and four seam would top the list for Kingham), but it helps to throw pitches that complement each other. Kingham’s curveball and four-seam would complement each other, benefiting from a tunneling effect to disguise the pitches.

Using your best pitch more often doesn’t guarantee success. Just look at Brault as an example here. He’s using his best pitches more, but not getting the same results with those pitches.

But Kingham already isn’t getting results with his other pitches, so it wouldn’t hurt to try something new. Throwing his curveball more often, and going primarily with a four-seam/curveball approach could help him perform much better going forward. Those are his two best pitches right now. He’s throwing the four-seam most often, but could benefit from using the curveball more often over the changeup and cutter, which are his two worst pitches at the moment.

The Pirates will still be using Kingham and Brault after Archer returns, and at least one of them will factor into the plans every fifth day for the time being (aka, until Jameson Taillon returns or until Mitch Keller is ready). In Kingham’s case, I could see better results going forward if he opted to use the curveball more often, going with a similar extreme approach on the pitch that guys like Taillon and Chad Kuhl took last year with their best breaking pitches.

Today’s Starter and Notes: The Pittsburgh Pirates lost 9-3 to the Arizona Diamondbacks on Monday night. Joe Musgrove gets the start tonight. He has allowed a combined 13 runs over 5.2 innings in his last two starts. He faced the Diamondbacks on April 22nd and gave up three runs over six innings. Arizona will counter with 25-year-old right-handed pitcher Luke Weaver, who has a 2.98 ERA in 45.1 innings, with 50 strikeouts and a 1.06 WHIP. He faced the Pirates on April 23rd and allowed one run over 6.1 innings. In each of his last two starts, Weaver has gone seven innings and allowed one run.

The minor league schedule includes five games today if the weather cooperates. Rain has changed some rotations and affected all four teams recently. Mitch Keller is listed now for today for Indianapolis. Rookie Davis was supposed to start originally, but I went with the updated version of Keller pitching. Altoona has a doubleheader. They will send out Pedro Vasquez, who has allowed 0-2 runs in five of his six starts this season. His 2.73 ERA leads Altoona starters. Game two is listed as Joel Cesar, so it’s likely to be a bullpen game. He hasn’t made a start since 2016 in the DSL and his season high in innings is three this year.

Greensboro has Steven Jennings listed as the probable for tonight. They had two straight rain outs (both with Nicholas Economos as the probable) so there could be some adjustment to their rotation. Finally in Bradenton, Cody Bolton is due to pitch today and just like Saturday, I confirmed it, so hopefully it’s correct this time. Like I said, it’s a messy schedule.

From Altoona, the only team that didn’t get rained out on Sunday, we have two highlights from the middle of their order. First is a Hunter Owen double.

A couple of big knocks pull us within one

Two ABs. Two RBIs for @jerricksuiter. This one pulls us within a run.

Only one former Pittsburgh Pirates player born on this date, and he played just one game. Drew Rader was a star pitcher at Syracuse, who would have been the first overall draft pick if there was an amateur draft back in 1921. Known at the time as the best college pitcher, the Pirates paid extra to get Rader into camp in 1921 and ended up using him just once. He pitched two shutout innings on July 18,1921, coming into the game late with Pittsburgh down 12-1 to the Giants. That was not just his only Major League game, he also only played one minor league game in his pro career. I will point out that a pitcher named Rader with an unknown first name, pitched briefly during the 1925, 1926 and 1929 seasons in the low minors, so that may have been him.

Also born on this date, manager Horace Phillips, who took over the team in 1884 and stuck around until 1889, making him the first manager for the Pirates (then called Alleghenys) after they moved to the National League.

On this date in 1896, Jake Stenzel collects six hits, as the Pirates defeat the Boston Beaneaters by a 20-4 score. Pittsburgh had 27 hits in the game. Stenzel had two hits the day before and four hits the day after his big game, making him 12-for-15 over a three game stretch. He ended up with a .361 batting average that season, which is one point higher than his .360 average with the Pirates over five seasons. That average puts him as the top hitter in franchise history.

Stenzel is a great player from the past that is often overlooked due to his short career and how long ago he played, but he has done something no one else in baseball history has done. He has four seasons in which he hit at least .350, stole 50 bases, scored 100 runs and drove in 80 runs. No one else has reached those minimum standards four times in their career and he did it four years in a row (1894-97).

Two years before Stenzel’s big game, the Pirates and the Cubs (then called the Colts) met for the first time on May 14th. The two teams went another 45 years before they met again on this date. In that 1894 game, the Pirates (who went by the nickname Braves that season) won 6-3 behind the pitching of Ad Gumbert, who went 15-14 that season despite a 6.04 ERA. Pittsburgh scored four runs in the second inning after a dropped ball at second base would have resulted in an easy inning-ending double play.