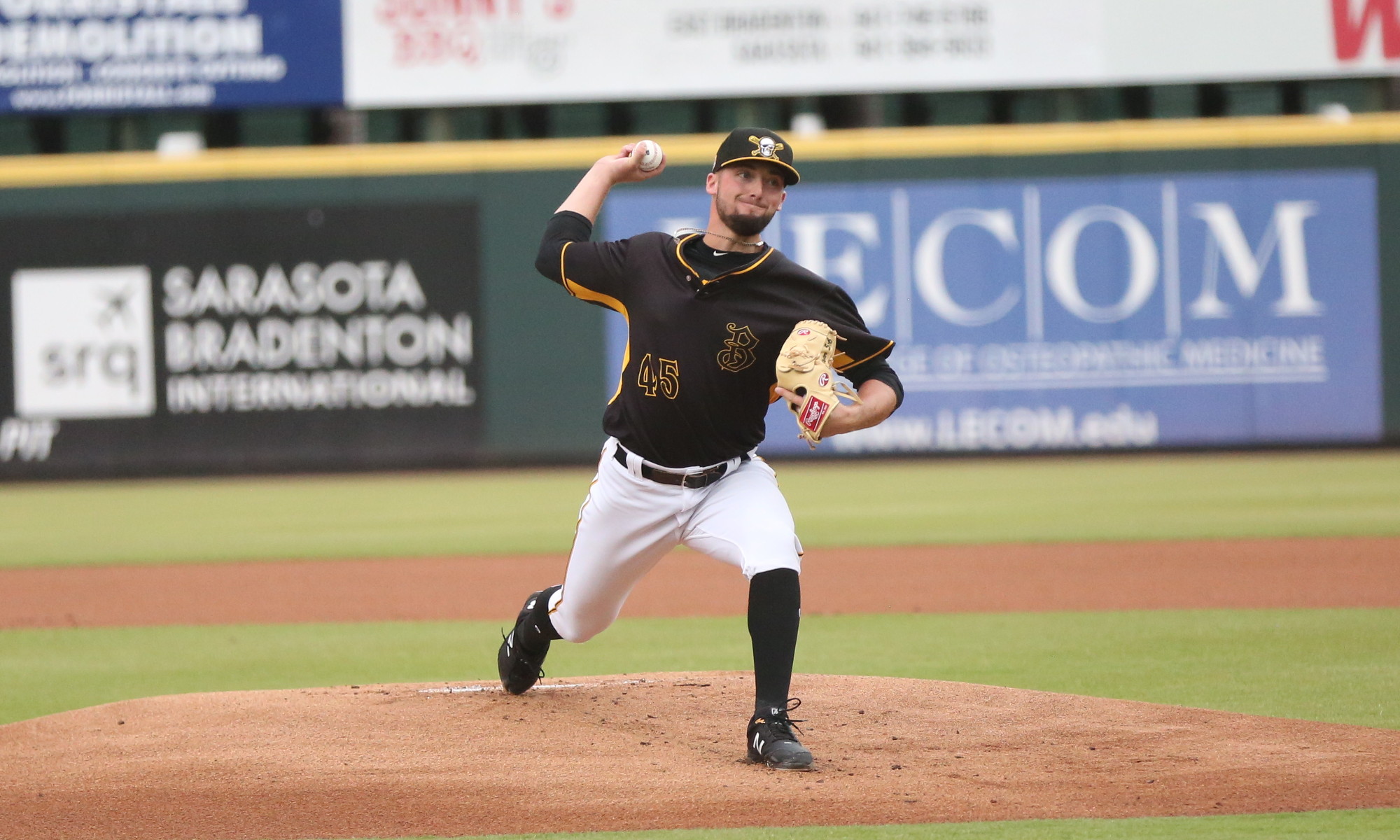 The Bradenton Marauders wrapped up their first half schedule last night, with Cody Bolton getting the start. He was on a limited pitch count, after not pitching for the last two weeks due to a minor groin strain. He was also given a rest due to his innings total, which has already surpassed last year’s mark. It was just a three inning outing, but he showed the 97 MPH fastball and improved breaking ball that we have seen all season. If we had a mid-season award for the best player, my vote would be for Bolton.

So with that being said, let’s take a closer look at his first half. He finished with a 1.72 ERA in 57.2 innings, with an 0.92 WHIP, a .184 BAA and 64 strikeouts. Bolton ranks second in the Florida State League in ERA and WHIP, while collecting the eighth most strikeouts. For perspective on the strikeout total, he is tied with two other pitchers for the 26th most innings in the league. Below you will find a breakdown of his 11 starts during the first half.

April 8th: In his season opener, Bolton quickly set the pace for his strong season. He went five innings, allowing one run on two hits, with no walks and six strikeouts. His start was limited to 60 pitches because that’s where he was in his build up to get to full strength at the time.

April 13th: The first start I saw from him this year. He went six innings, allowing one run on three hits, with three walks and eight strikeouts. It took all of three innings of watching him pitch for me to feel confident enough to send out this tweet:

Cody Bolton has the pitches to be a top five prospect for the Pirates by mid-season. His stuff is filthy. Fastball is sitting 94-96 tonight, slider and changeup both look strong. Six strikeouts in three innings for Bradenton tonight

April 18th: The second time I saw him pitch was almost as impressive as the first. He went five innings, with an unearned run on four hits, two walks and three strikeouts. The run came on a Nick Franklin error on a routine play and extended Bolton’s inning, which eventually limited him to five innings.

April 24th: The third time I saw Bolton and he became a pitcher not to miss when I had the chance to watch. That means just home games in Bradenton, because no other FSL teams show games online. This game was one of the better ones. He threw six innings, with an unearned run on four hits and a walk, while picking up six strikeouts.

April 30th: His second road game and his second strong start on the road. Bolton put up the same line as his last start, except the run was earned this time. Six innings, four hits, one run, one walk and six strikeouts. He threw 60 of 85 pitches for strikes.

May 6th: It would have been nice to see this game. Bolton tossed seven shutout innings on three hits, with no walks and seven strikeouts. One of the hits didn’t leave the infield and he retired the final nine batters he faced, all while holding a 1-0 lead.

May 14th: The Pirates pushed back Bolton’s start a few days to start giving him some rest. Maybe that threw off his schedule, or maybe it was Tim Williams being at the game that did him in that night. Bolton lasted just 2.2 innings, giving up five runs on seven hits. This game included the only home run he has allowed this year. From what I was told, it didn’t look as bad as the pitching line indicated. It was his only home start that I didn’t watch, so maybe it was my fault.

May 19th: Bolton was a little shaky in this road game against Palm Beach, but you will still take the results. In five innings, he allowed one earned run on four hits and three walks, with five strikeouts.

May 24th: I made sure to watch this game against Tampa. He allowed two runs on five hits, with no walks and eight strikeouts. The first run he allowed was due to poor routes in the outfield by two different players. The second run came on two hard hit balls. Bolton went slider heavy in this game and it was extremely effective, especially to lefty hitters.

May 30th: This was the fifth time I saw Bolton and it was his best outing so far. In six innings, he allowed one hit, walked two batters and picked up a career high ten strikeouts. The lone hit was a soft, low liner that barely got out of the infield and was nearly caught. I mentioned in the game recap that his velocity was a tick slow and he displayed better control in his other outings. Maybe the Pirates saw the same thing, because this is when he took his break. They said it was a minor groin strain, but it sounded like giving him a break was the bigger part of the reason.

June 13th: Last night’s start was limited to three innings and he threw shutout ball on two hits and two walks. One of the walks had two pitches that looked like pretty good strikes, so he wasn’t wild at all. He threw 32 of 51 pitches for strikes. While I only saw one changeup, the two versions of a slider/cutter he throws, gives him three different pitches that he uses often. His first pitch of the night was 97 MPH.

Altoona was eliminated from the first half playoffs.

Bradenton was eliminated from the first half playoffs.

Greensboro was eliminated from the first half playoffs.

* This section will be removed tomorrow. It will return around August 1st and have playoff updates for every team from the DSL up to the majors.

Today’s Starter and Notes: The Pittsburgh Pirates lost 6-5 to the Atlanta Braves on Thursday afternoon. The Pirates now travel to Miami for three games against the Marlins. They will send out Steven Brault in the series opener for his sixth start of the season. Brault allowed two runs over 6.1 innings in his last start. That followed up two outings in which he gave up just one earned run in 9.1 total innings. The Marlins will counter with 26-year-old right-hander Trevor Richards, who has a 3.31 ERA in 73.1 innings, with 68 strikeouts and a 1.19 WHIP. He has a 3.21 ERA in eight home games, where batters are hitting just .181 against him. Richards has allowed a total of two runs on five hits in his last 19 innings (three starts) combined.

The minor league schedule includes the season opener for Morgantown. You can find their season preview on the site later this morning. It will also be linked below in the schedule for the rest of the season. Braxton Ashcraft, who was last year’s second round pick and is currently the #13 prospect in the system, will get the start in the season opener. Eduardo Vera will go for Indianapolis. He has struggled for most of the season, but he’s coming off of two runs over seven innings in his last start. Domingo Robles makes his fourth start for Altoona. He tossed a seven inning complete game shutout in his last start, during the first game of a doubleheader. Steven Jennings will make his sixth road start for Greensboro. He has a 5.31 ERA and a 1.56 WHIP at home, while posting a 5.79 ERA and a 1.37 WHIP on the road. Bradenton is off until Monday due to the Florida State League All-Star break.

From Indianapolis, Cole Tucker doubles in a run in his first game back in Triple-A

Logan Hill has 19 doubles for Altoona. Here is one from earlier this week, before he was promoted to Indianapolis

After Portland scored twice in the first, @HillSan33 ties things up with a two-run double to center.

Two former Pittsburgh Pirates players born on this date, plus seven trades of note.  Mark Lee pitched for the 1980-81 Pirates after they acquired him in a trade from the San Diego Padres. He pitched 16 games out of the bullpen with the Pirates and was traded away during Spring Training in 1982. Also born on this date, Randy Tomlin, who was a member of three playoff teams. He pitched from the Pirates from 1990 until 1994, making 94 starts and 12 relief appearances. He started one game during the 1991 playoffs and pitched twice in relief in the 1992 playoffs.

Seven trades of note on this date, all listed below. Details of each trade can be found in the link above.

1892: Pirates trade Hall of Fame pitcher Pud Galvin to the St Louis Browns for second baseman Cub Stricker. Three days later, without ever playing for the Pirates, Stricker was traded to the Baltimore Orioles for pitcher Adonis Terry.

1940: Catcher Ray Berres sent to the Boston Bees for catcher Al Lopez, who is a HOF manager.