Morning Report: A Look Back at the Top Ten Prospects from the 2016 DSL Pirates 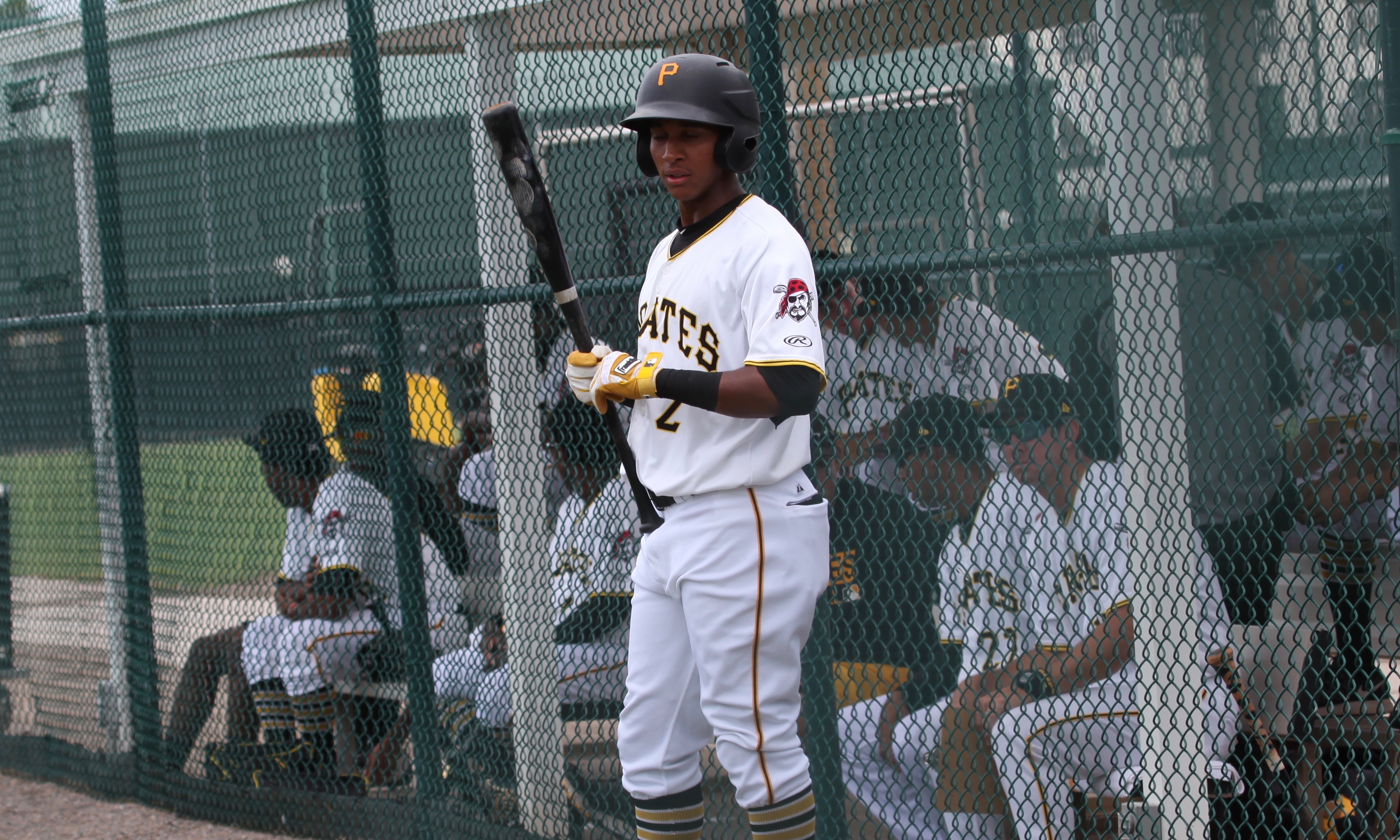 Over the last two mornings, we have taken a look at the progress made by the top ten prospects from the 2017 DSL Pirates and the two 2018 teams. Today we go back to the 2016 DSL team. Just like with those previous articles, we are going to check up on the players on the list and show what the list would look like if we ranked them now.

There is one thing that really stands out on this list immediately, and that’s obviously “Kevin” Sanchez. I held out on calling him “Lolo” because he goes by Kevin, but it was causing confusion here, so I finally started going by the nickname instead. If you’ve ever wondered how he got that name, it’s not a great story. He had a slightly older cousin named Lola who he grew up around, so his family started calling them Lola and Lolo.

Okay, the more obvious thing that stands out now is Portorreal at #1. The timing of the list coincided with his breakout season at the plate, along with his promotion in-season to the U.S. There was good reason to believe that the progress was sustainable as well. He made an adjustment with his hands at the plate, to get them in a better position quicker, and it immediately paid off. He cut his strikeouts in half and that was a big issue in the prior season. He was drawing walks and showing power. Portorreal actually put up solid numbers in the GCL in 2017, posting a .769 OPS, while being younger than the average player in the pitcher-friendly league (.682 league OPS). In 2018 however, he looked bad during Spring Training and Extended ST, especially with mental mistakes and well below average fielding. The Pirates cut him after the season.

Lolo Sanchez was the only other player considered for the top spot. He was their top signing in 2015 at $450,000, and he was considered to have a solid approach at the plate at an early age, with plus-plus speed. While he would be the top prospect from this group now, back then he didn’t make solid contact and that plus-plus speed somehow translated into 4-for-12 in steals. Sanchez obviously did a lot of growing in a short time because he had an outstanding 2017 season in the GCL and then moved up to West Virginia in 2018 prior to his 19th birthday. He was just promoted to Bradenton.

Right behind Sanchez on the list was Rodolfo Castro, who was promoted to Bradenton at the same time as Sanchez. Castro was signed as a strong defensive player with a raw bat. At least those were the scouting reports. He turned out to be the opposite, though his defense has finally caught up to the bat. Castro has power, decent speed and a nice glove, with the ability to play shortstop, though second base looks better for him.

Castro’s biggest concern, which keeps him from being a top prospect right now at age 20 in High-A, is his BB/SO rates. His walks are up slightly this year, but so are his strikeouts. You can take the strikeouts increasing with the increase in power, but he doesn’t get on base enough at this point. Those types of numbers in Low-A usually don’t translate well to big league success down the line.

Gabriel Brito was next and he got there due to mid-season promotion to the U.S., as well as improved hitting from a higher bonus player. He was in his second year in the league and the reports were much better. Brito didn’t make any progress in the two seasons since this list was made, and then he retired in the middle of this spring, returning home to the Dominican. He’s still technically property of the Pirates, but it seems unlikely that he will return.

This wasn’t a strong group of prospects and that is evident now by the rest of the list, though you’ll see one name at the bottom that stands out. I’ll get to him shortly. The next four players are all pitchers. Sergio Cubilete had the best stuff on the staff back then, and it really wasn’t close at the time, though there was one asterisk. I mentioned in the top ten back then that Joel Cesar would have been on the list, but he didn’t pitch enough. He didn’t even come close really, throwing 6.2 innings before he was injured for the rest of the season. He hit 100 MPH reportedly, and was being used as a starter, so that made him intriguing.

Cubilete sat 92-95 MPH as a starter and put up strong results. He was older than the other pitchers on the team, but those next three names weren’t exactly looking great back then. Manzanillo, Pina and Santana all received six-figure bonuses. Pina pitched well in 2016, then other two didn’t. The problem with Pina was that he didn’t even hit 90 MPH at his peak. He was getting by with control and a strong changeup.

Those first three pitchers have all been released. Santana made our top 50 prospect list this year due to improved velocity, adding about 5 MPH to his fastball while not sacrificing any of his solid control. He was also getting more movement on his fastball, which led to a ton of ground balls last year. This spring has been a lost one for him. He came into camp and had some new mechanical issues that needed to be cleaned up and then he was injured shortly after he started getting back on track. It’s unclear right now if he will pitch this season at all.

The #9 and #10 were on the list strictly due to their bonus. Larry Alcime from the Bahamas came with a solid scouting report, but he struggled due to the jump in competition from what he was seeing in his home country. The same could be said about Sherten Apostel, who has two plus tools in his raw power and great arm at third base, but not much else. In fact, the Pirates were quick to point out that they thought he could make it as a pitcher if the bat didn’t work out. After all of the strikeouts in his first season, that seemed like a possibility. Apostel has been traded away and is doing a solid job in Low-A, with the caveat that it’s coming in a hitter-friendly home park. Alcime was released last year, with the reason being that his bat was too slow and he was having trouble with average velocity.

I stopped at seven spots for an obvious reason. Those are the only active players now. The other 29 players were all released. You might remember Inoa from yesterday’s article. He wasn’t really considered for the 2016 list, other than the fact that he received a $240,000 bonus in 2015. Back then, that was 11.3% of their entire bonus pool, so while it’s not a huge amount, it’s a good portion spent on one player, equal to about a $700,000 bonus (percentage-wise) in this upcoming signing period. The reason he didn’t make the list in 2016 is that he put up a .593 OPS and his bat was ahead of his glove, which isn’t ideal for a catcher.

Oliver Garcia put up nice stats back then, but we heard that he was headed back to the DSL for a second season, so he didn’t get top ten consideration. In 2016, he posted a 2.61 ERA as a starter, though he did that throwing 88-90 MPH and lacking a strikeout pitch. He was actually a fly ball pitcher who benefited from the big parks and lack of power hitters in the DSL. Garcia improved his stuff in 2017 and moved up to #7 on that list.

Today’s Starter and Notes: The Pittsburgh Pirates won 6-3 over the San Diego Padres on Saturday evening. The Pirates will now send out Steven Brault for his seventh start. His last appearance was nine days ago when he threw six shutout innings against the Miami Marlins. He has allowed three runs over his last 21.2 innings, covering four starts. The Padres will counter with 26-year-old lefty Joey Lucchesi, who has a 3.74 ERA in 79.1 innings, with 78 strikeouts and a 1.11 WHIP. He threw seven shutout innings six days ago against the Milwaukee Brewers. He faced the Pirates back in May 17th and gave up two runs over seven innings.

Brad Case will make his third start for Bradenton. He allowed two runs over seven innings in his last outing. Case has an 0.83 WHIP in 77 innings this season. Alex Manasa gets the start for Greensboro. He has thrown at least six innings in each of his last five starts, and hasn’t allowed more than three earned runs in any start this season. Bristol will send out Santiago Florez, a 19-year-old, 6’6″ right-hander from Colombia, who sits mid-90s with his fastball. No starter has been named yet for Altoona. The DSL Pirates1/2 are off on Sundays.

From Indianapolis, Cole Tucker driving in the go ahead run on Friday night

.@cotuck drove in the game-winning run last night at Pawtucket.

Bligh Madris hits his fourth home run of the season

💣 Cannonballs comin' in Connecticut's capital @Bligh_Guy hammers his fourth of the season. He has 3⃣ RBIs through his first two at bats.

Two former Pittsburgh Pirates players born on this date, plus a trade of note. Both players were pitchers, Ken Jungels (1942) and Bill Harris, who pitched for the Pirates from 1931 until 1934. Harris was used mainly in relief for the Pirates, starting 22 times and coming out of the bullpen 61 times. He had a 3.45 ERA in 276.2 innings. He didn’t have a great Major League career, but if you throw in his minor league stats, he had 281 career wins.

On this date in 1956, the Pirates sent second baseman Curt Roberts and pitcher Jack McMahan to the Kansas City A’s in exchange for second baseman Spook Jacobs. This trade did almost nothing for the Pirates, as Jacobs started 11 games and struggled with the bat. That got him a demotion to the minors, which opened a spot for minor league second baseman Bill Mazeroski to make his Major League debut.

On this date in 1909, the Pirates won 3-1 over the Cardinals to push their record to 39-13 on the season, the best record in baseball. In the last 100 games of that season, which was every game after June 23rd, Pittsburgh went 71-29. That was also the best record in baseball over that time. Hall of Fame pitcher Vic Willis threw a complete game against the Cardinals and Honus Wagner had two walks and two hits, including a double that drove in the go-ahead run in the eighth inning.