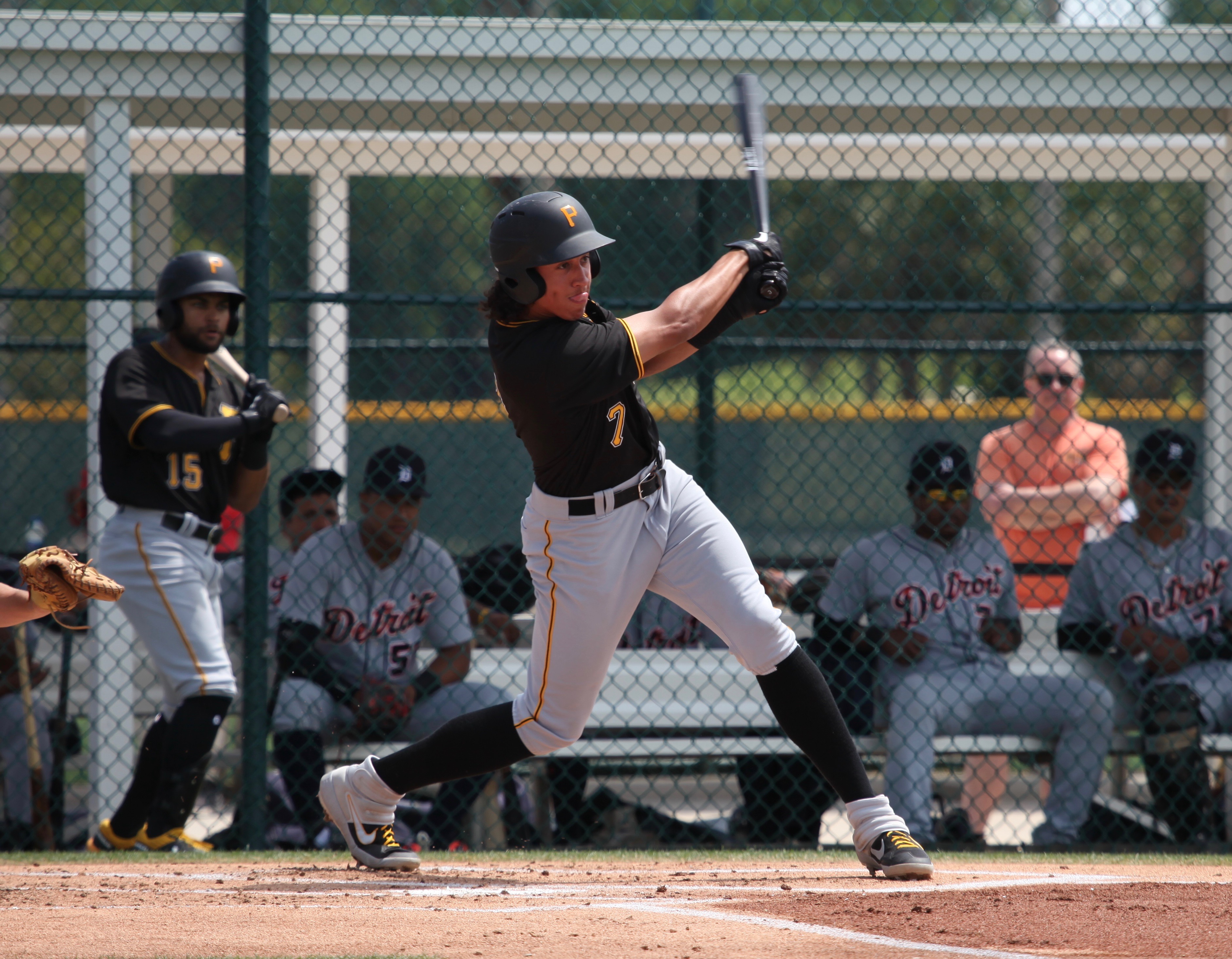 Indianapolis lost 11-8 to Buffalo. Dario Agrazal made his first start since his big league debut with the Pirates and it did not go well. He lasted 4.2 innings, giving up seven runs on eight hits, with one walk and four strikeouts. Prior to this game, he held the International League lead for ERA and WHIP, though he was a handful of innings under the minimum for league leaders. Luis Escobar moved back into relief after pitching great as a starter. This day didn’t go well, as he allowed four earned runs in just 1.1 innings. Jesus Liranzo and JB Shuck took an inning each and retired the sides in order. Liranzo had two strikeouts, Shuck had one.

Cole Tucker had two home runs in this game, hitting a two-run shot in the third inning and adding a solo blast in the ninth. It’s his second career multi-HR game and he now has five homers on the year (seven including his time in Pittsburgh). Jason Martin, Kevin Kramer and Eric Wood each had two hits. Martin laced his tenth double down the opposite field line, but his single was a gift from the umpire. He grounded to the right of the first baseman and the pitcher covered first. Martin was called safe, but replays showed that not only was he tagged before he reached first base, he never even touched the bag as he tried to avoid the tag. Indianapolis had one walk and 14 strikeouts.

Altoona had off on Thursday.

Bradenton won 4-0 over Tampa. Cody Bolton got the start and was perfect for four innings. He was limited tonight due to missing two weeks earlier this month, then coming back with three innings pitched. Bolton had five strikeouts and threw 32 of 50 pitches for strikes. He lowered his season ERA to 1.61 through 61.2 innings. Joe Jacques followed Bolton and had a strong outing of his own, going four shutout innings on three hits, with no walks and five strikeouts. He threw 39 of 55 pitches for strikes. Nick Mears took the ninth and retired the side in order.

Raul Hernandez had the big hit in this game, bringing home two runs in the second inning with his ninth double of the season. He also had a single and a walk. Dylan Busby had two singles and scored two runs. Lucas Tancas collected his 20th double. Lolo Sanchez made his High-A debut and went 0-for-4, though he did get robbed of a hit in his second at-bat. Rodolfo Castro also made his Bradenton debut and he went 0-for-4 with a run scored.

Greensboro had a 10-2 lead through six innings and turned it into a 12-11 loss in ten innings to Delmarva Luis Nova got the start and pitched well, giving up two runs on two hits and a walk, with seven strikeouts in six innings. A two-run homer in the fourth accounted for both runs. He now has a 2.57 ERA in three starts since joining Greensboro. Allen Montgomery had a bad night in the seventh inning, recording one out, while giving up four runs on four hits, a walk and a hit batter. He was helped out by Cam Alldred, who stranded two runners, but Alldred wasn’t helped in the eighth by Yerry De Los Santos, who allowed in three inherited runs charged to Alldred. De Los Santos put three runners on before recording the final two outs of the eighth. Will Gardner pitched a scoreless ninth and Braeden Ogle allowed an unearned run in the tenth for the loss.

The offense had a big game, led by lead-off hitter Kyle Mottice, who returned to Greensboro after a brief trip down to Morgantown. He had two hits, two walks, two runs scored and two RBIs. Fabricio Macias had three hits and drove in two runs. Jack Herman hit his fourth home run of the season in only 37 at-bats. Zac Susi had two runs and two RBIs. Pat Dorrian had two singles, two runs scored, a hit-by-pitch and an RBI. Everyone in the lineup had either an RBI or run scored or both.

Morgantown lost 5-4 to Mahoning Valley. Braxton Ashcraft matched Cody Bolton’s performance through four innings, but things fell apart in the fifth. After retiring the first 12 batters, Ashcraft started the fifth inning with a strikeout, but the ball was in the dirt and catcher Ryan Haug airmailed the throw to first base. Ashcraft looked like he recovered nicely with the next batter, but a ball that looked like a strike that got all of the plate was called a ball. Things went downhill from there, with an RBI double, walk and a three-run homer. Ashcraft ended on a high note, getting a strikeout before he was removed due to his pitch count. Francis Del Orbe followed with one run over 2.1 innings, while striking out five batters. Michael LoPresti tossed the final two innings without a run.

The offense for the Black Bears came from the new draft picks. Jared Triolo (72nd overall pick) had an RBI infield single in the first, then drove an RBI double the opposite way in the third inning. Two sixth inning runs scored on an error and a passed ball. Seventh round pick Blake Sabol had a triple for his first pro hit. He also singled and scored a run. Brett Kinneman, who was last year’s seventh round pick, had three walks, a single and a run scored.

Bristol lost 10-2 to Burlington. Jose Maldonado made his season debut and allowed three runs on five hits and a walk, with four strikeouts in 4.2 innings. Wilger Camacho made his U.S. debut and walked two batters, plus hit another, bringing in an inherited runner from Maldonaldo, before recording the final out of the fifth. Oliver Mateo also made his U.S. debut. Mateo sits 96-100 MPH with his fastball, but his pitching is a true work in progress. He walked two batters and struck out another, before being removed. Hai-Cheng Gong allowed three runs of his own and one inherited run, in one inning of work. Yandy Vega gave up two runs during his 1.2 innings. Samson Abernathy (27th round pick) took the ninth in his pro debut and retired all three batters he faced.

For the third day in a row, the offense was awful. This time they were being no-hit into the seventh inning. They scored two meaningless runs in the seventh off of a reliever who had to wait out a rain delay in the middle of the inning. Francisco Acuna had a double. Daniel Rivero went 1-for-3 with a walk. Draft picks Ethan Goforth and Ernny Ordonez made their pro debuts. The Pirates scored three runs in the series, getting swept by a combined 26-3 score.

The DSL Pirates1 won 12-8 over the Rays2. Starter Listher Sosa had a rough outing, giving up four runs on three hits and five walks in 3.1 innings. Carlos Campos followed with one run over the next 3.2 innings. Wilkin Valdez had control issues in the eighth, which led to two runs, one being earned. Jordy Ortega allowed an unearned run in the ninth.

The DSL Pirates2 moved to 15-2 on the season with a 12-3 win over Colorado. Starter Felipe Mezquita has a 3.38 ERA after allowing two runs on four hits and two walks, in 4.1 innings. He was followed by Jose Amaya, a reliever with a 4-0 record after giving up one run over 1.2 innings. Miguel Toribio recorded his first save with three shutout innings.

Dariel Lopez ($400,000) kept his .400 average by going 2-for-5 with a single and his seventh double. He scored twice and drove in three runs. Geovanny Planchart had three hits and an RBI. He’s batting .310, but is still looking for his first extra-base hit. Eudys Carrasco went 3-for-4 with two runs scored and two RBIs. Deivis Nadal has a .354 average after going 2-for-5 with his seventh double. Rayber Romero picked up his eighth stolen base.