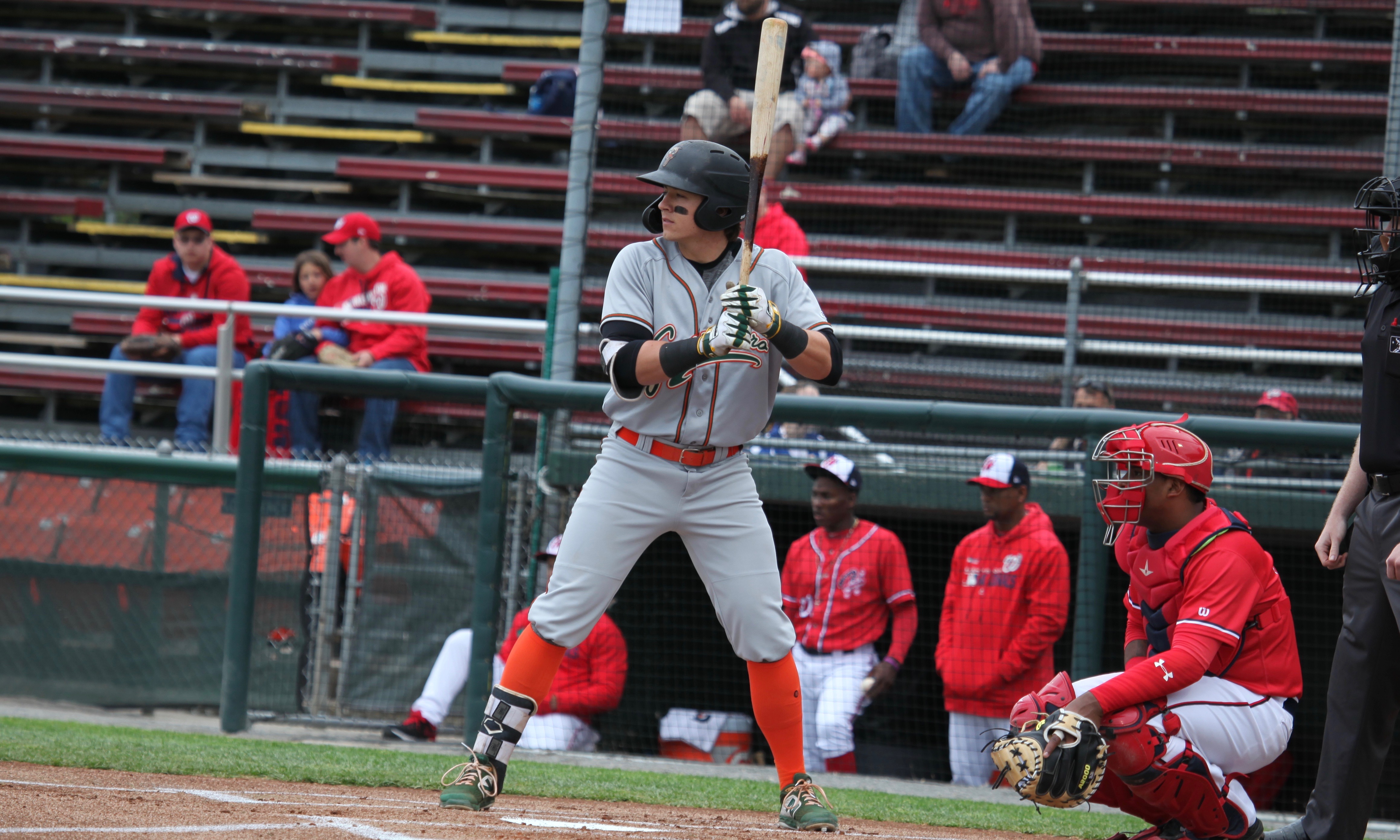 Indianapolis lost its fifth straight, dropping a 5-3 game to Gwinnett.  Eduardo Vera gave up three runs over 5.2 IP.  He allowed five hits and two walks, and struck out four.  Luis Escobar gave up a pair of unearned runs in an inning and a third, as an Eric Wood error opened the door in the seventh.  Escobar gave up three hits and a walk.  Jake Brentz threw a scoreless inning.

The Indians had 11 hits, but ten were singles.  Trayvon Robinson had three hits, and Jason Martin, Jake Elmore and Steve Baron each two.  Wood had the only extra base hit, his seventh double.

Altoona brought out the longball to beat Binghamton, 8-5.  Jared Oliva had a big day, going 3-for-4 with his fifth home run.  He also stole his 17th base, putting him third in the Eastern League.  Chris Sharpe had only one hit in five times up, but it was a grand slam, his second home run since moving up to AA.  Arden Pabst had two hits, including his third home run.  Bligh Madris and Gift Ngoepe also had two hits apiece.  Ngoepe did, however, commit an error that cost Austin Coley three unearned runs.

James Marvel went seven innings for his ninth win.  He gave up just three hits and a walk, and fanned three.  Marvel allowed a single and a home run to put two on the board in the first inning, but didn’t allow a runner past first the rest of the way.  Matt Eckelman threw a scoreless ninth for a save.

Bradenton beat Fort Myers, 7-4.  Rodolfo Castro has been hot since he moved up to the Florida State League and he had a double and triple — his third and first, respectively, in the FSL — along with a walk, and drove in three runs.  He’s now batting 297/316/595 since his promotion.  Oneil Cruz returned to Bradenton and had two hits, a bunt single and his second double.  Dylan Busby added a pair of RBIs, and Lolo Sanchez stole his third base in the FSL and scored three runs.

Deon Stafford left for a pinch runner after hitting a double, his fourth of the year, in his first at-bat.  Preliminary indications are that he’s not seriously hurt.

Greensboro scored six times in the second inning, capped by a bases-clearing double by Mason Martin, and went on to rout Lakewood, 10-1.  Martin had three doubles and five RBIs on the day.  He now has 75 on the year, which leads the South Atlantic League by 17.  (He also leads the league in home runs by five.)  The doubles give him 19, which ties him for ninth in the league.

Luis Nova had a strong start.  He went seven innings and gave up one run, on a solo home run, and four hits.  Nova didn’t walk anybody and fanned five.  John O’Reilly and Cam Alldred each threw a 1-2-3 inning to close it out.

The Grasshoppers had a host of baserunners due to ten hits and nine walks, which let them score ten times despite going 2-for-13 with runners in scoring position.  Ji-Hwan Bae reached base four times on his ninth double, a single and two walks.  Jack Herman had two hits, including his sixth home run in just 22 games, and a walk.  Jonah Davis hit his third home run and Connor Kaiser drew three walks.

Morgantown got all of its offense in the bottom of the ninth in a 3-2 walkoff win over Williamsport.  The Black Bears had no runs and just three hits in the first eight innings, but got a double from Jared Triolo and singles from Matt Gorski, Will Matthiessen, Ryan Haug and Nick Patten — with a couple of strikeouts mixed in — to win it.  Haug’s and Patten’s hits came with two outs and drove in the tying and winning runs.

Noe Toribio had an outstanding start, allowing just one hit, walking nobody and striking out seven in five innings.  Jacob Webb gave up two runs in his two inning.  Garrett Leonard threw two scoreless innings to get the win.

Bristol beat Princeton, 8-5.  Santiago Florez’ second start of the season didn’t go as well as the first.  He lasted just two innings, probably because he threw 33 pitches in a three-run second.  Overall, he gave up three runs, three hits and two walks, while striking out one.  C.J. Dandeneau picked up the next three innings, giving up a run while fanning five.  Enrique Santana bailed Luis Arrieta out of a second-and-third, one-out situation in the seventh.  Santana went an inning and two-thirds, allowing a hit and a walk, and striking out two.  Alex Roth, drafted in round 21, made his pro debut with a scoreless ninth to pick up the save.

The Pirates had 11 hits and eight walks.  Brendt Citta reached base four times, on two hits and two walks.  Ernny Ordonez, Francisco Acuna and Daniel Rivero each had two hits, and Jesus Valdez had a hit and two walks.  Valdez, Citta, Acuna and Ordonez all had doubles.

The DSL Pirates1 are off on Sundays.

The DSL Pirates2 are off on Sundays.