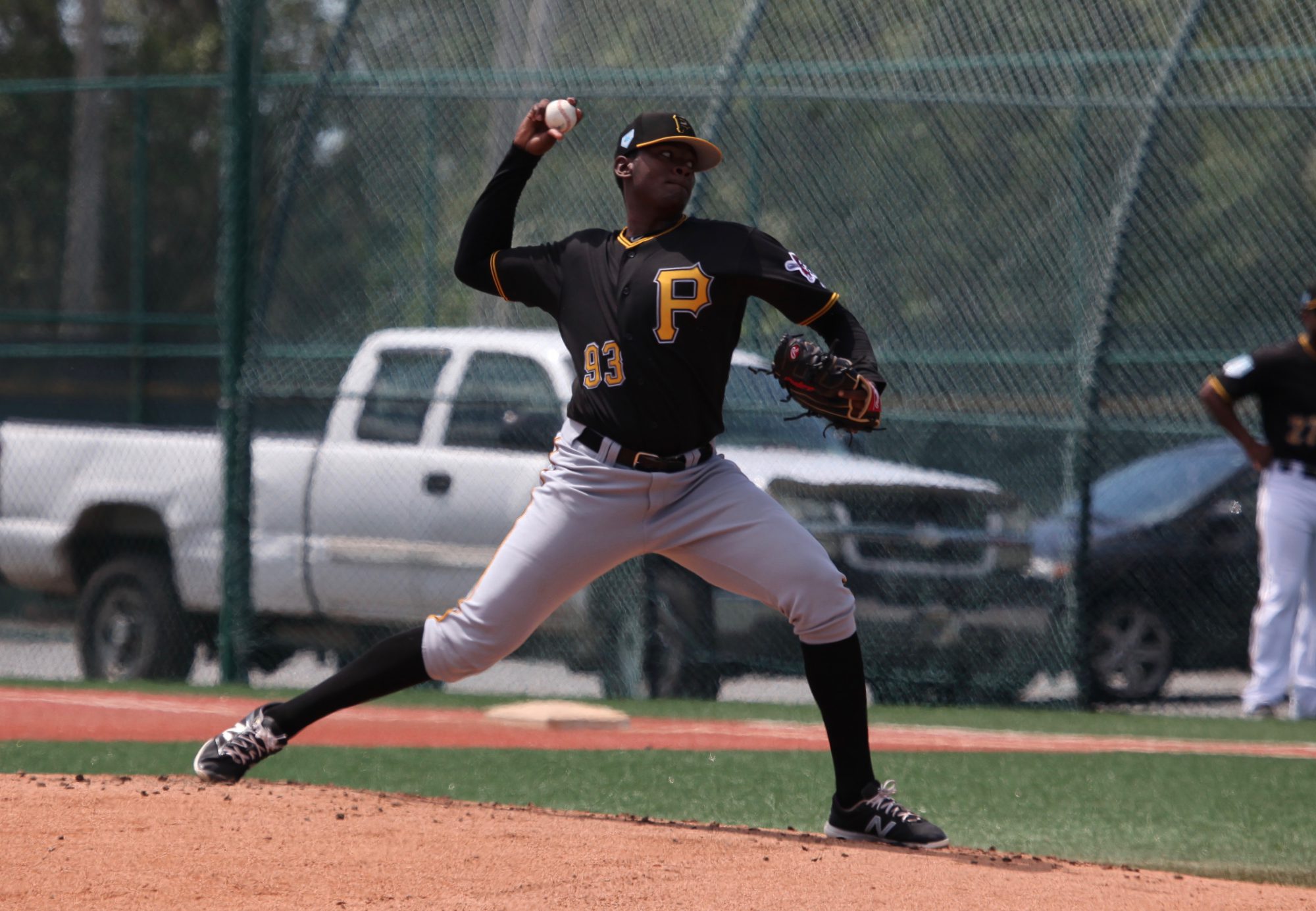 In our Bristol Season Preview, we mentioned that they had a group of pitchers with high upside. I wanted to take a deeper look at what made their six-man starting rotation such an interesting group. On an off-day yesterday for Bristol, I was able to have a long in depth conversation with their first-year pitching coach Eric Minshall. While he had some nice reports on the draft picks who are debuting there this year, I wanted to concentrate on the six starting pitchers that he has been with since Spring Training. He has been with these players since March, so there is a nice track record of working with them and watching their progress.

The starting six consists of all right-handed pitchers, five of them are 20 years old, while the other turned 19 in May. Tahnaj Thomas is the only top 30 prospect in the group right now, which is one of the reasons I wanted to write this article. The other five aren’t showing up in our Prospect Watch every night at the top, but that doesn’t mean that they aren’t prospects. The young buck in the group, 19-year-old Santiago Florez, was one of our top 50 prospects coming into the season. Luis Ortiz and Adrian Florencio are recent international signings who skipped the bottom two levels to join this pitching staff. Dante Mendoza was acquired in the Jordan Luplow/Max Moroff trade, while Jose Maldonado made it to the U.S. last fall and impressed in the Fall Instructional League.

Below you will find a brief description of each player, along with a quote from Minshall, which talks about what is going right for the players now, what they are working on and what they need to improve on most going forward. It allows you get an in depth look to see what makes the entire staff as a group intriguing, so the others five aren’t getting lost behind the top prospect in the group, which is where we start.

Thomas was acquired this off-season in the Luplow/Moroff deal. He was already rated highly before joining the Pirates due to his upside. He was hitting 97 MPH, but has recently touched 99 MPH on multiple occasions. Thomas started pitching late in the Bahamas as a youth, so he is still considered raw on the mound, but he’s in the process of losing that tag. The Pirates made a tweak in his delivery this spring after he missed some time due to a minor shoulder injury. He’s got a 6’4″ frame and is still filling out. Thomas lasted just 1.2 innings total in his first two starts combined (mentioned below), then gave up two runs over 9.2 innings in his last two starts combined.

“He’s 95+ MPH, carrying it through five innings. He brings intensity and pitches with authority, commanding his fastball to both sides of the plate and just throwing it by guys. He uses his slider well off of the fastball. His changeup is more of a splitter and it’s starting to develop. He’s finding his release point on the pitch and it has good downward movement. He bounced back well from his first two starts, learning to let go of bad things quickly and move on to the next guy. He’s learning to keep attacking hitters and it has worked out well for him.”

Florez was one of the top pitchers signed by the Pirates during the 2016-17 international signing period. He was hitting 92 MPH as a sinkerball pitcher and had trouble throwing strikes in 2017 in the DSL, then moved to the GCL last year and really took off during the season, improving his velocity and throwing more strikes. He switched from a loopy curve to a harder slider this year, so his breaking ball is fairly new. Florez is a big kid at 6’6″, 222 pounds and he’s really still just starting to fill out his frame. He has a 3.75 ERA and a 1.08 WHIP in three starts this year, posting a high 2.71 GO/AO ratio.

“To have so many tools at a young age and understand how to use them is a true blessing. He has huge upside. His fastball is 95-97. His changeup is showing improvement with depth and movement every outing. His main focus in Bristol is to learn how to attack both sides of the plate with his fastball. He’s learning command. He’s still developing his changeup usage and slider usage as part of his arsenal. His focus and mentality are getting better with every outing and his confidence is rising after every start. He’s out there learning how to have success.”

Maldonado (pictured above) didn’t get much mention when I was putting together our DSL season recap last year, but if I saw his Fall Instructional League videos a few weeks earlier, I would have looked for more information. He was impressive in fall ball, sitting low-90s and showing a sharp breaking ball. His breaking ball is a slider/curve combo, looking like a curve sometimes and slider others, while some just call it a slurve. The Pirates called him up to make a start during the final week of the GCL season last year, but that game was called after two innings due to rain and the stats were wiped out, so this year in Bristol is his official debut in the States.  Maldonado has a 2.70 ERA through four starts. He left with back tightness on Monday night, but it was more precautionary than an injury that will keep him out. He’s 6’2″ and filled out a little more than the others in this group.

“Since extended Spring Training, he’s been consistently improving week-to-week with both fastball command and his attack plan. His velocity has been consistent, up to 95 MPH. He’s learning to effectively use his changeup to keep hitters off balance and induce weak contact. His breaking ball continues to improve and he’s learning which counts to throw it in to get his maximum effect out of the pitch.”

Ortiz was signed for $25,000 last October at age 19 and he immediately started to show improvements with the Pirates. He’s been up to 95 MPH and he has posted strong starts in two of his three outings. He ran into some issues in his second game, but we are talking about a pitcher who was in his second game as a pro, second game ever under the lights, and doing it in the Appalachian League. Ortiz is listed at 6’2″, 163 pounds. He’s a little heavier now, but obviously still has room to fill out.

“He is very exciting to watch. A fastball that has been consistently 93 MPH, throws strikes, pitches inside well and attacks hitters on the inside half of the plate with the mentality that he’s going to get you out. He has a good slider that he knows how to use to put hitters away. His changeup has nice movement and it’s another pitch that he uses at a weapon. He can throw all three of his pitches in any count. He has a lot of self-confidence on the mound and exuberance, so he’s an easy pitcher to get behind.”

Florencio is similar to Ortiz in that he went right from signing in the Dominican to playing in Appalachian League. He’s much bigger though, standing 6’7″, 205+ pounds. He was just signed this February and late in the month too. The Pirates noted that he had a lot of filling out to do, especially in the lower half, which could help him see some extra velocity. He was 88-91 MPH when he signed and now he is 91-93, touching 94 MPH. His slider is starting to come along and he has a nice changeup.

“He’s developing rapidly right in front of our eyes. He’s learning to use his fastball. It has really good tilt because he’s so tall, which help gets him some strike calls down in the zone. He also gets a lot of ground ball outs and he’s commanding his fastball to both sides of the plate. He’s learned to throw his changeup off of his fastball, getting a lot of movement on the pitch, which results in a lot of swing-and-miss. It’s getting results against both lefties and righties. He went from a big bodied athlete with tools to someone who learned how to pitch with those tools.”

Mendoza was signed out of the 12th round in 2017 by the Cleveland Indians. He’s a big kid at 6’5″, 185 pounds, with room to add more muscle. He’s not a hard thrower like the other five in this group. His fastball sits in the 88-90 MPH range, but the big frame and youth gives him room to add more velocity. When he was acquired, his changeup was considered his best pitch according to scouting reports, with a lot of movement, though it didn’t have great separation from his fastball. Improving that has been part of his work this year leading up to the season. Medoza put in just 40.1 innings in his first two seasons combined. He has a 5.25 ERA and a 1.75 WHIP in three starts this season.

Minshall summed up the conversation with a nice over impression of what it’s like to work with these players. While we were just talking about the starting staff, his final comment covered the entire pitching staff.

“It’s a pure joy to come into the clubhouse everyday knowing that I get to work with this staff. I pour everything into these players because they are hungry to learn and I am eager to teach. They give me everything they have every day and it’s my responsibility to give them my A game too.”