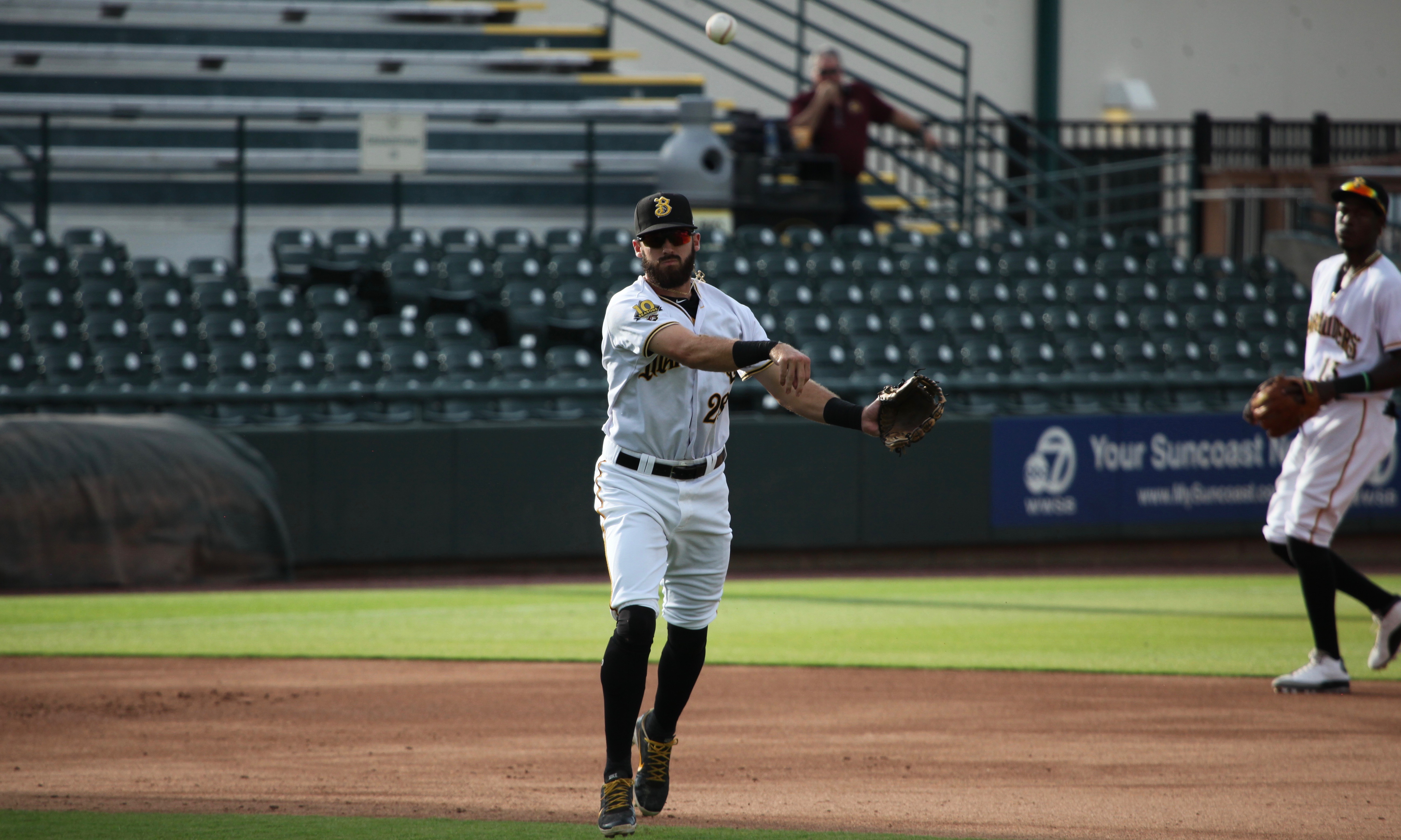 This is a report from two Bradenton Marauder games from the past week:  their 8-4 loss to Fort Myers on July 12 and their 8-0 win over Clearwater on July 16.

The Marauders have an interesting team this year, and not just because they have most of the Pirates’ top prospects below the AAA level.  Their hitting presents some interesting questions due to the extreme pitching environment in the Florida State League and the current trend toward sacrificing contact for power.  Strikeout rates that were considered fatal just a few years ago (basically, anything over 25%) seem manageable now if a player produces enough power.  And Bradenton has had power, relative to the offense-stifling FSL.  They’re leading the league in homers with 76 in their first 94 games.  Last year they hit just eight more all year, in 36 more games.

The offense in the two games I saw came mostly from the longball.  Mason Martin hit his first FSL homer with two aboard in the first inning of the loss to Fort Myers.  In the Clearwater game, Dylan Busby and Cal Mitchell both hit solo shots, and Lucas Tancas put the game away with a grand slam.

Here are some notes on individual players:

Dylan Busby, 3B:  I started with Busby (pictured above) because his season has featured the most extremes.  He’s leading the league with 18 homers, which came in odd fashion:  he hit 10 in his first 25 games, then none in the next 29 games, then eight in the next 28.  He’s striking out in 36% of his plate appearances, but walking or getting plunked (which has led to some concussion issues in the past) in 13%.  The result is a 223/323/486 slash line skewed toward power.  To put it in context, that .486 SLG isn’t overwhelming in the abstract, but the FSL as a whole is slugging just .354.  Busby’s mark is second in the league, 27 points ahead of the #3 hitter.  Anyway, he didn’t play in the Fort Myers game.  In the Clearwater game, he hit HR #18 and walked twice in four plate appearances.  The home run barely cleared the fence, but it went to straightaway center.  Busby looked better in the field than I expected, moving well and throwing on the run on several slow bouncers.  He has a good arm.

Oneil Cruz, SS:  Cruz has been hot since he returned from a foot fracture, but mostly didn’t get good swings in these two games.  He got three hits anyway, all singles.  He can get away with some less-than-perfect at-bats due to his exceptional power.  In one at-bat, he was fooled by a pitch away and just reached for it with one hand; the ball was caught at the fence in right-center.  He didn’t swing and miss in the two games nearly as much as I’ve seen him do in the past.  Cruz didn’t get a great deal of action in the field in the two games, which seems to happen whenever I see him.  He did make a nice backhanded grab on a short hop.  He also made a leaping grab of a line drive that I can safely say no other shortstop in baseball history could have made, unless there was some 6’8″ shortstop I don’t know about.

Travis Swaggerty, CF:  Swaggerty had only one hit, a double, in the two games, but he swung the bat mostly well, especially in the Clearwater game.  He had a drive caught at the fence in center and was thrown out after hitting a liner off the pitcher.  He appeared to get good jumps and run efficient routes in center on several long drives he had to chase down.

Brad Case, RHP:  Case started the Fort Myers game and didn’t have one of his better outings.  His fastball sat at 92-94, but it’s not a dominant pitch and he needs to get ahead in the count, which he didn’t do consistently in this game.  He got hit hard in the third and fourth innings, but hung on to go six, giving up five runs.  He mixed his pitches more in those last two innings and that seemed to work better, even though the fastball by then was often down to the upper-80s.

Samuel Reyes, RHP:  Reyes relieved in both games and had very different outings.  In the Fort Myers game, he repeatedly fell behind and got hammered when he then got fastballs over the middle.  He gave up three in the seventh inning before throwing a scoreless eighth.  Reyes’ fastball typically sits at 93-94, although it was down a good bit by the end of that long seventh.  As with Case, it’s not a pitch he can dominate with.  His best pitch is a curve, but he wasn’t able to use it much:  this is the Pirates, so pitchers can’t throw curves early in the count or behind in the count.  In the Clearwater game Reyes did a better job of getting ahead and breezed through three quick innings.

Aaron Shortridge, RHP:  Shortridge started the Clearwater game and threw five shutout innings without walking or striking out a batter.  He threw a lot of strikes (47 of 63 pitches) and not a lot was hit hard, but obviously didn’t miss bats.  His fastball sat at 91-93, and he also threw a slider and change.

Rodolfo Castro, 2B, and Lolo Sanchez, OF:  Both players, especially Sanchez, are struggling a bit with FSL pitching since they moved up.  Both played only the second game.  Castro went 0-for-4 and struck out three times, and looked about like you’d expect for a guy having that kind of game.  Sanchez, as he normally does, made contact each time, but it was weak contact.  Castro had a couple pretty good plays in the field.  Sanchez probably saved Shortridge a run.  He used his outstanding speed to chase down a double deep down the left field line with a runner on first and two out, and got it back in quickly enough to hold the runner at third.

Cal Mitchell, OF:  Mitchell is a frustrating hitter to watch, because his swing looks good and he has power.  He swings through a lot of pitches, though, possibly because he tries to pull every pitch.  He wasn’t swinging and missing quite so much in these games, putting one barely over the right field wall in the Clearwater game and went 2-for-6 overall.

Mason Martin, 1B:  Martin is batting only .172 since he moved up, although he had a single, double and home run in these games.  He doesn’t seem overwhelmed, though, as he has the same number of walks as strikeouts so far (8).  I’ve seen a lot of Martin this year and he looks completely different from the hitter I saw late last year at Bristol.  He’s always going to strike out a lot, but the swing-and-miss isn’t nearly at the catastrophic level it was last year.  For one thing, he’s hitting the ball up the middle fairly often.  Last year he was trying to pull the ball on every swing, leaving him extremely vulnerable to anything away.  I don’t know whether Martin’s approach will work at the highest levels, but he’s clearly making adjustments, which is a promising sign.  He also seems to be improving slowly but steadily at first.