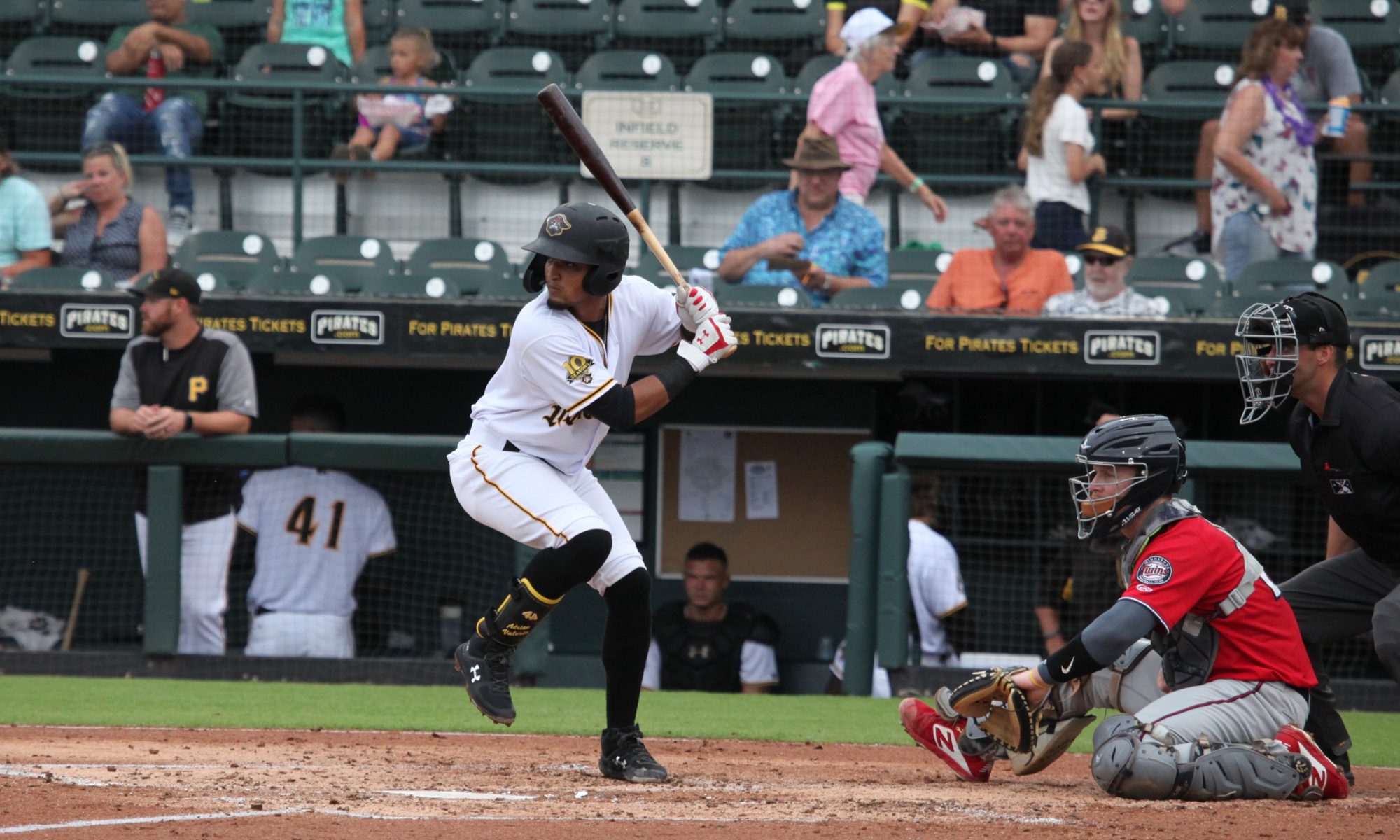 Over the last two days, we have looked at the 2017 and 2018 top ten prospects lists for the Bristol Pirates. The 2017 team had some young pitching talent just like the current rotation in Bristol. The 2018 team didn’t have quite as much, and the top ten list was hurt by trades and some solid prospects not seeing enough time with Bristol to qualify for the list. Today we go back to the 2016 club to check on the progress from their top ten prospects.

The 2016 Bristol team was weak from the start. At the time, it was possibly the worst top ten we did for any team and that still may be true today. Bristol is always weak compared to the other clubs because they don’t get the best college draft picks and don’t get any high school picks. They also don’t get a lot of the best players from the previous year in the GCL because they will skip the level, which is especially true for hitters. Here’s the 2016 list followed by comments:

Yes, I know that lists looks bad now. It looked bad then. Valerio was the only legit top 50 prospect on the list at the time. Fernandez and Schlabach were fringe top 50 prospects. No one else was considered for the top 50 from this list.

Bristol actually received two high draft picks that year. Fifth round pick Blake Cederlind and seventh round pick Brent Gibbs were considered raw players, so they were placed in Bristol back then. Both got hurt, so they didn’t play enough to qualify for the list. Cederlind would make the top ten look better, but back then he just threw hard (touching 97) and not much else. Gibbs was learning how to catch and he had a decent bat. We didn’t get to see him in 2016, but did the next year with West Virginia and he was an awful catcher. His arm was very strong, but that’s it. He wasn’t able to catch some of the better pitchers back then, literally. There were pitchers too good for him to catch in Low-A. It’s the only time I’ve ever heard that, except for knuckleball pitchers.

Valerio back then was 19 years old and already displaying strong defense, with tools to be a future plus defender at shortstop. His bat lagged behind, but he showed the ability to drive the ball well. His problem back then was something we heard a lot early in his career. He would hit a home run, then go up there with a swing for the fences approach afterwards, which would get him into slumps. Basically, a home run was the worst thing he could do at the plate. He looked strong in 2017, fighting through three injuries to put up solid stats with West Virginia, but his aggressive approach hasn’t worked at the higher levels. The defense is still strong, and he looks good at second base too, plus he runs well. His bat just never looked as good as what we saw in 2017. Hard to believe he is still just 22 years old.

Fernandez back then was 21 years old and put up an .832 OPS. His calling card was speed. He was considered a plus-plus runner at one point. He lost some speed with a hamstring injury in 2015, but the real issue was that he continued to fill out and not in a good way. He was injured again in 2017, then when we saw him later in the year there was no plus speed. You would probably say he was above average still, but there’s a big difference from 55 grade speed to 70+ grade speed. He was released after the 2017 season and it wasn’t all on the field related reasons.

Schlabach was the main highlight on the pitching staff. A young lefty pitcher with a 6’5″ frame and some deception in his delivery due to how high his right knee came up towards his chest. That was cleaned up after the 2016 season and he has a more conventional delivery now, which helped him add velocity. He’s 22 years old now and pitching in relative obscurity in the Bradenton bullpen, while putting up solid stats. He missed some time after taking a line drive off of his pitching elbow.

When your fourth best prospect is a late round college draft pick in the Appalachian League, you know there’s some issues with the team. Eckelman would not have made the Morgantown top ten in 2016, even if he put up the same stats as he did in Bristol. Morgantown wasn’t stacked that year either, it was an average season for them. He made the list because he showed decent velocity as a starter, commanded his pitches well and had a huge workhorse frame, so starting seemed like a possibility in the future. He’s a solid organizational reliever in Altoona right now, who could possibly make the majors one day, though that is far from a given.

Michael de la Cruz was still living on his rookie season in the DSL at this point. Here’s a quick summary of what happened to him. He showed four tools with power potential giving him a possible fifth tool. He had a great approach at the plate in the DSL in 2013, basically receiving high marks for his all-around game. He then moved to the U.S. in 2014 and a series of minor injuries led to an 18-year-old being homesick away from his home for an extended period for the first time. When he returned home, he treated the off-season like a three month party and instead of adding weight over the winter like he was asked to do, he came back ten pounds lighter. He didn’t have ten pounds to spare. His peak baseball performance was spring 2014 before things started going wrong and he never really put in the full effort to recover.

None of the last five guys are still around and there wasn’t much back then to get excited over. Pomeroy threw hard without much control. He was mostly injured with the Pirates. Oller struggled at Bradenton last year after looking strong in Morgantown. He was released a little too quick it seemed at the time and he is currently a starting pitcher for the Giants in Low-A. Mike Wallace relied heavily on breaking balls, which works well in the lower levels, but didn’t once he got the High-A. Garrett Brown was a football player in high school with above average speed. They probably could have shown more patience with a raw player, but he was released last year. Herrera was all bat, who had great showings in Extended Spring Training, but didn’t hit as well once the season started. That’s a little odd because the competition level is basically the same until you get to Low-A.

One name that didn’t make the list back then is actually the best prospect from the team now. Geoff Hartlieb was a college senior in the bullpen, with a 4.44 ERA. He was suffering from something that we see occasionally in this league, but it’s hard to know without actually seeing them beforehand. He was at the end of a long season and his stuff wasn’t as good as pre-draft reports. By the next year, Hartlieb was hitting upper 90s in West Virginia, and he has hit 100 MPH since. Most people know him from his time in the majors, which didn’t go well. The problem with using that as an indicator is that he was rushed to the big leagues due to a need. He wasn’t ready for the show. He had a handful of Triple-A innings with high walk totals. That’s never equaled big league success.

A second name from back then has pitched great this year, though he still has limited upside. Nicholas Economos back then was a second-year player with college experience and he did not pitch well in Bristol. He didn’t even get to full-season ball until one game at the end of 2018. It’s really tough to get excited about a player who rarely touches 90 MPH and doesn’t have spot on command either. Economos is getting great results with deception and mixing his pitches. His changeup looks like one of the best in the system, as batters have real trouble picking it up, leading to awkward swings. He’s still better than most of what is left from this list.

Today’s Starter and Notes: The Pittsburgh Pirates lost 10-4 to the Chicago Cubs on Saturday afternoon. The Pirates will send out Trevor Williams for his 13th start of the season. He faced the Cubs on July 1st and gave up five runs on nine hits and three walks in 5.2 innings. His two previous starts combined saw him allow 11 runs over 11.2 innings. The Cubs will counter with veteran lefty Jose Quintana, who has a 4.19 ERA in 101 innings, with 84 strikeouts and a 1.34 WHIP. He faced the Pirates on July 4th and allowed three runs over seven innings. He also faced the Pirates earlier in the season and tossed seven shutout innings. Quintana has a 4.17 ERA at home and 4.21 on the road.

The minor league schedule includes Max Kranick going for Bradenton. He currently leads the Florida State League in innings pitched and he has thrown at least six innings in each of his last nine starts. Altoona starter Domingo Robles has thrown 102 innings this season between Bradenton and Double-A. In that span, he has a 3.35 ERA, with a 1.18 WHIP and 75 strikeouts. Morgantown doesn’t have a starter listed, but it should be Braxton Ashcraft making his sixth start. Despite a 6.35 ERA in 22.2 innings, he has held the opposition to a .225 BAA, while posting a 1.24 WHIP.

Colin Selby is the probable for Greensboro. He has allowed one earned run in each of his last three starts, all of them coming on the road. Bristol goes with Luis Ortiz for the fourth time. He has put up two strong starts (one run over ten total innings) and given up four runs over 3.2 innings in his other outing. Alex McRae goes for Indianapolis. He has faced Columbus twice already this season, failing to get through five innings either time. In 9.1 innings combined, he has allowed seven runs, though he has also picked up 15 strikeouts. The DSL Pirates have off for their All-Star break. The GCL Pirates are off on Sundays.

From Altoona on Friday, Brandon Waddell continues to impress as a starter, after struggling in relief for Indianapolis

We're up 1-0 through six. pic.twitter.com/hoYc7SZZNq

Their guy stuck out seven through the first three.@HillSan33 thought that was enough. Solo homer and we're on the board.

Matt Eckelman records the final out for his 17th save

Matt Eckelman notches his 17th save of the year and preserves the season's second win for Brandon Waddell. pic.twitter.com/MRtJaYDWxX

Six former Pittsburgh Pirates players born on this date, including one of the better pitchers from the early years of the Pirates. Jesse Tannehill pitched for Pittsburgh from 1897 until 1902, starring on the first two teams in franchise history to finish first in the National League. Tannehill was a star during his day, going 197-117 in his career and 116-58 during his time with the Pirates. No one in team history with more than 650 innings, has a better winning percentage. From 1898 until 1902, he won at least 20 games in all but one season. That one year he didn’t, he won 18 games and led the NL with a 2.18 ERA. One interesting note about his career can be found on Baseball-Reference, where they list the most comparable players. For Tannehill, the top five are: The other three pitchers in the 1902 rotation, Sam Leever, Deacon Phillippe and Jack Chesbro, plus Babe Adams and Ed Morris, who both made their name with the Pirates.

Also in the above link, there is a recap of a wild game between the Pirates and Cincinnati Reds from the 1974 season that turned the year around for Pittsburgh. They were 12 games under .500 going into the game and went 51-25 the rest of the way. You can find the boxscore here.