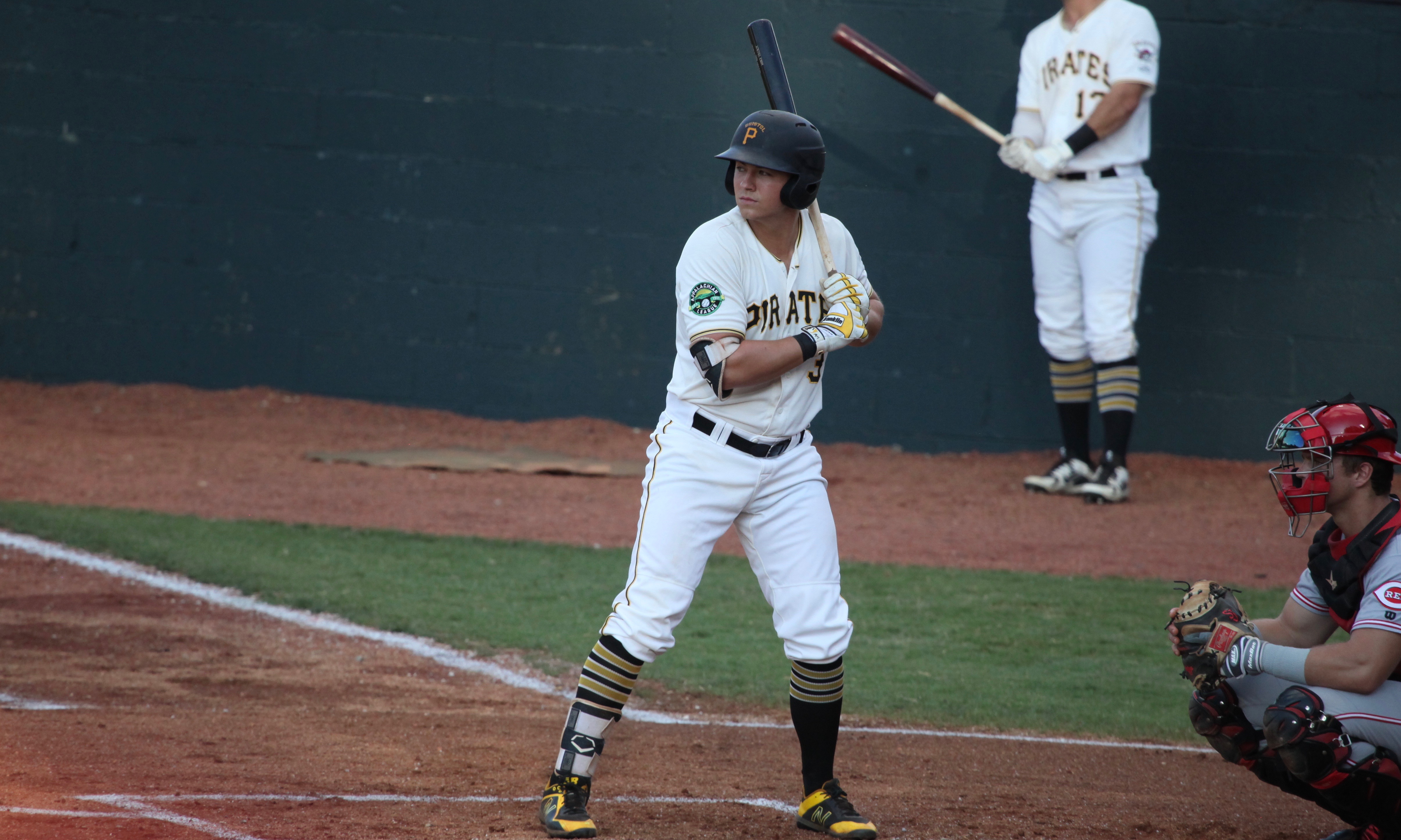 Yesterday we took an in depth look at the Bristol Pirates starting rotation. Along with some other interesting players on the team, the club is going to have a solid top ten prospects list at the end of the year. Usually the Bristol top ten list is very top-heavy with prep pitchers and it lacks quality depth. For the most part, the players on the second half of the list each year didn’t receive any consideration for the organization’s top 50 list during that same season. For today and the next two days, we are going to look back at the last three top ten prospects lists for Bristol and show why this year seems to be different.

We start with the 2018 list, and the guys who didn’t qualify for the list due to either playing time or no longer being in the system, were actually a better group of prospects than the ten players who made the list. Neither Shane Baz nor Sherten Apostel are setting the world on fire in Low-A this year, but they would have been the top two prospects on the team before they were traded. Brad Case, Pat Dorrian, Denny Roman and Luis Nova all didn’t play enough to qualify for the list, but they would have been on it if they did. Here’s the top ten list from last September. I’ll note that the first four spots were mid-season top 50 prospects, so we kept them in that order, followed by voting on the next six spots.

This list obviously hasn’t aged well, but that just proves my point made up top that Bristol usually doesn’t give you much to work with from the start. So expecting it to turn into something big is a nice dream, but not a reality in most cases. Mason Martin was #1 back then and he’s clearly #1 right now. He just recently received a promotion to Bradenton after leaving the South Atlantic League as the top slugger in the league. He just turned 20 years old a month ago, so he’s on a nice path right now. Martin just needs to make sure that strikeouts don’t become a big issue, which will be a challenge while moving up to a better league for pitchers.

Jennings was a clear #2 back then and he’s probably still in that spot, with just one player challenging him. The recent starts for Jennings have looked much better. He is hitting spots with his fastball and his curve looked strong in a recent outing I saw live. He also has control over a slider and a changeup. There is potential here still, but the velocity, especially holding it late, is his main issue.

Roger Santana was hitting 95 MPH last year as a 20-year-old lefty. He was throwing a changeup that multiple people described as a plus pitch, and his breaking ball was a nice third offering. Cut to this spring and we thought he might have a chance for the Greensboro rotation, so when he didn’t show up there, we looked into his progress. The first problem was that he didn’t come into Spring Training in the best condition. When Extended Spring Training (EST) games started, he was on the side getting one-on-one work to clean up his delivery, which wasn’t a problem last year. Before I could get a follow up report on him, he was listed as injured on the EST roster, and at last check he was still injured and likely not going to pitch this year. That’s all moot now because he was released on Wednesday. Between his lack of full effort and the injury, he took quite a fall in ten months.

Conner Uselton was a high draft pick in 2017, who was injured in his second game. You might see other sources say that his 2018 season, which was very poor, could have been affected by the 2017 injury, but he was healthy and playing fall games in the Dominican later in 2018. So it’s highly unlikely that it had any effect on him seven months after he was 100% healthy. Uselton lacked effort last year, often being benched for indifferent play. The only positive about him was a strong arm. We had him in our mid-season top 50, but he wasn’t considered for the 2019 prospect guide top 50 due to the reports. This year hasn’t been much different, with no positives and he won’t be playing this season, with a very cloudy future as well.

Jonah Davis would have been ahead of Uselton if we didn’t stick to the mid-season guide to rank players. Davis was the easy choice for the fifth spot, which speaks to his strong season, but he was also a major college player in the Appalachian League with huge strikeout issues, so that also speaks to the strength of the list. Davis moved up to Greensboro this year and those strikeouts became an even bigger issue. He also seems to be slower than reports from last year, so that’s taking away value on the bases and on defense. Davis is well off top 50 consideration right now, but he would still rate well on an updated top ten list from this team, which isn’t saying much.

Davis was a consensus for the fifth spot, just as everyone had Colin Selby in the sixth spot. He put together a solid season last year, but you’re always wondering about a college pitcher doing well at this level. He has moved up the ranks this season, mostly because he’s added velocity, throwing about three MPH harder than last year, which has helped his breaking pitches as well as the fastball. Selby is doing well with Greensboro as a starter, which would make him the main challenger for Jennings in an updated #2 spot. They are only a year apart in age and Selby is the better pitcher right now.

Oliver Garcia might be the only player you will hear this about. He went from the Bristol starting rotation in 2018 to the Bristol bullpen this year and he’s actually improved. They are seeing more consistent stuff from him this year and it plays up better in relief. He is still just 21 years old, so we can’t write him off yet. He remained at the same level, got moved to a lesser role, and he’s a better prospect. That’s rare.

The 8-10 on this list was just a mixture of the six players who received votes for the final spots. There was no confidence or consensus with any of them. Lambert played well in Bristol, but he was a college senior, who wasn’t even playing every day. Romano pitched great, but the reports on him were no different than the previous three seasons when he was never considered for a top ten list. Brendt Citta didn’t do much as a college junior from a major school, but there weren’t really good options for these spots, so someone had to make it.

Right now, if we did a top ten revisit, Martin is the clear #1, followed by Jennings and Selby as 2a/2b. Davis and Garcia would be 4/5. Victor Ngoepe and John O’Reilly didn’t make the list last year, but each has shown enough improvements this year that they would be in the top ten. Same goes for Allen Montgomery, who has struggled a bit lately, but he has also hit 96 MPH with a lot of movement on his fastball and a nice slider as an out pitch. Lefty reliever Joe Jacques would also be on the list. He’s already nine games into his Bradenton career and putting up strong numbers.

Today’s Starter and Notes: The Pittsburgh Pirates have been on their All-Star break since Sunday. They begin a three-game series on the road against the Chicago Cubs tonight. Chris Archer will be on the mound in the first game back. His last start was against the Cubs nine day ago and he allowed three runs over five innings while picking up eight strikeouts. He has a 7.89 ERA in six road starts this season. The Cubs will counter with Yu Darvish, who has a 5.01 ERA in 97 innings, with 111 strikeouts and a 1.34 WHIP. He started against Archer nine days ago and allowed four runs over 6.2 innings. Darvish also faced the Pirates in April and gave up five runs in 5.1 innings. He has a 6.23 ERA in nine home starts.

Osvaldo Bido will get the start for Greensboro. His last outing was wiped from the scorebook due to rain in the second inning after he threw a scoreless first. His previous start (which is officially his last start), Bido allowed six runs over five innings. Fifth round pick Grant Ford makes his third start for Morgantown during today’s doubleheader. He has pitched three innings each time, both against Williamsport, while allowing a total of three runs. No starter has been named for the second game. Santiago Florez will make his fourth start for Bristol. He has lasted five innings in two of his starts, giving up a total of two runs in those outings.

The Pirates signed Deion Walker on Tuesday. Here’s a highlight video of him. He’s pitching at the beginning, but he was signed as an outfielder.

Six former Pittsburgh Pirates players born on this date, included a pitcher who helped the team get to two World Series. Starting with the best first, we have Lee Meadows, who pitched for the Pirates from 1923 until 1929. He was a very good pitcher on some very bad teams before coming to the Pirates. His 100-128 record in his first 8 1/2 seasons does not tell the whole story. When he was put on a Pittsburgh team in 1923 that was in contention over the rest of his career, his record turned around. Meadows ended up going 88-52 with the Pirates, including 19-10 seasons in both 1925 and 1927, helping the Pirates to the World Series each year. In between those two seasons, he led the NL with 20 wins. You can read a full bio here.

As for the five other players born on this date, we have pitcher Tom Gorzelanny (2005-09), his teammate from the 2008-09 season, pitcher Phil Dumatrait. Another teammate of Gorzelanny, 2005-07 first baseman Brad Eldred. We also have 1970 catcher Dave Ricketts and utility fielder Johnny Wyrostek, who played for the Pirates during the 1942-43 seasons.

On this date in 1997, Francisco Cordova and Ricardo Rincon combined on a 10-inning no-hitter over the Houston Astros at Three Rivers Stadium. It was only the second time in team history a no-hitter went into extra innings, with the Pirates and Harvey Haddix losing in the 13th inning in the previous game. This was the eighth no-hitter in franchise history, the first since 1976, and it stands as the most recent one as well. You can view the boxscore here.