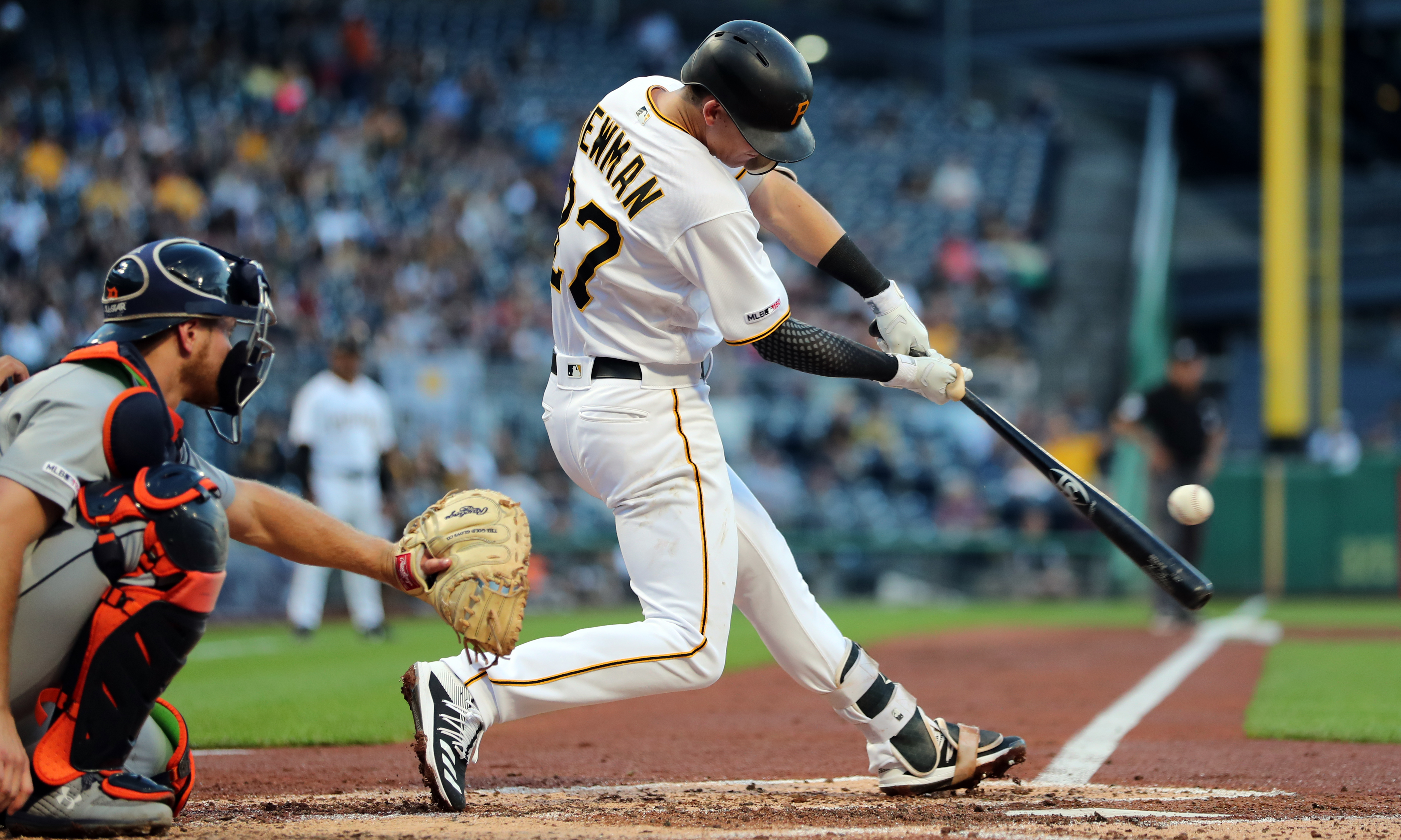 Kevin Newman always ranked high in our prospect rankings in large part to his high floor. He looked like a guaranteed MLB player from day one, having enough contact skills, speed, and defensive ability up the middle to reach the majors at least in a bench role.

The lack of power was always a key thing holding him back in our rankings. Power was never going to be a big part of his projected game. The Pirates did try a few things to try and improve his power, but nothing was showing results in the minors.

As a contact-only guy, Newman could get by with his speed and mostly singles. But he’d need to show the ability to hit for a high average in the majors, while also supporting his stats with a lot of walks. When he reached Triple-A, the walk rate plummeted, then recovered a bit last year, but never reached his old 9% ranges.

In short, Newman either needed to add power, or become one of the few successful high average/low walk/low power hitters in the majors.

So far this year, Newman has added the power. He has five home runs, which matches his career best in half the at-bats. He’s got a .159 ISO, which is a career best by far. The question is whether this new addition is something that is here to stay.

The initial look at the numbers isn’t good. There’s very little change at all in Newman’s ground ball/line drive/fly ball splits, with over 50% grounders. That’s not a horrible thing, considering his ability to get infield hits. His hard contact percentage has gone up, while his soft contact has also risen, with the medium taking the hit. It’s hard to evaluate these trends, even by month, as he doesn’t have much MLB time to display a trend. Perhaps the current combination is leading to more power, but that would be difficult to determine.

I don’t have an answer to whether Newman can continue hitting for power with his current batted ball profile. We’re all waiting to see the answer with more playing time. What I do know is that this is the version of Newman that the Pirates need, and this is the version that is a sure thing starter in the majors.

Today’s Starter and Notes: The Pittsburgh Pirates lost 2-1 to the Milwaukee Brewers on Sunday afternoon. The Pirates now return home for four games against the Chicago Cubs. Trevor Williams gets the start tonight. He has made two starts since returning from a right side strain. He came back with seven runs over five innings against the Detroit Tigers, then six days ago, he allowed four runs on eight hits in 6.2 innings against the Houston Astros. The Cubs will counter with 24-year-old right-hander Adbert Alzolay, who has pitched just 8.2 big league innings, posting a 2.08 ERA, with nine strikeouts and an 0.92 WHIP. He has given up just two hits, both of them solo homers.

The minor league schedule includes Steven Jennings returning from a short break to help control his innings in his first full season. He last pitched on June 21st and went four innings that day. Jennings posted a 2.08 ERA and a .208 BAA in the month of June. Cam Vieaux goes for Indianapolis for the sixth time. He has allowed 1-2 runs in each of his last four starts. Vieaux has a 3.22 ERA in 81 innings this season between Altoona and Indianapolis. Gavin Wallace goes for Bradenton. He had a 7.97 ERA on May 16th and since then he has allowed just one run in 22 innings. Bristol will send out Tahnaj Thomas for his third start. He has lasted just 1.2 innings in his two starts combined, throwing a total of 78 pitches, with 40 going for strikes.

There’s no starter listed for Altoona, but it should be the second start for Cody Bolton, who faced the minimum over his first four innings before giving up four runs in the fifth. Morgantown also doesn’t have a starter listed, but it is likely Will Kobos making his third start. He allowed four runs in each of his first two starts, throwing a total of 6.1 innings.

From Altoona, Chris Sharpe walks it off with a chopper over the drawn in infield

Tie game. Bottom of the ninth.

Tolman has been hitting well recently. Here he hits an RBI single on Saturday night

.@MitchellTolman plugs a single up the middle and scores @BdPope13

Three former Pittsburgh Pirates players born on this date, plus a trade of note. Starting with the players, we have pitcher Al Tate (1946), pitcher Frank Barrett (1950) and outfielder Fritz Scheeren (1914-15). Barrett has an interesting note to his career stats. They have been officially wrong for at least the last 40 years. Sometime between his last game and the printing of the 1976 baseball encyclopedia, his stats got changed to what they read now. He actually pitched a little less with the Pirates and gave up a run less. In this article from 2012, I broke down where the changes were made. The current stats give him a 4.15 ERA, but he actually had a 2.45 ERA during his brief stay in Pittsburgh.

On this date in 1921, the Pirates traded pitcher Elmer Ponder to the Chicago Cubs in exchange for outfielder Dave Robertson. The Pirates were hardly using Ponder and Robertson was struggling with Chicago, so both players got a chance for more playing time with their new team. Robertson put on a show at the plate with Pittsburgh, hitting .322 the rest of the way and he drove in 48 runs in 60 games. Ponder got hit around in Chicago, so short-term, it looked like a great deal. Robertson, who won two home run crowns earlier in his career, decided to hold out in Spring Training the next year and the move backfired. The Pirates released him and he later signed with the Giants, but had a tough season, and one that would be his last in the majors.