Morning Report: Everything Going Right For the Pirates So Far This Year 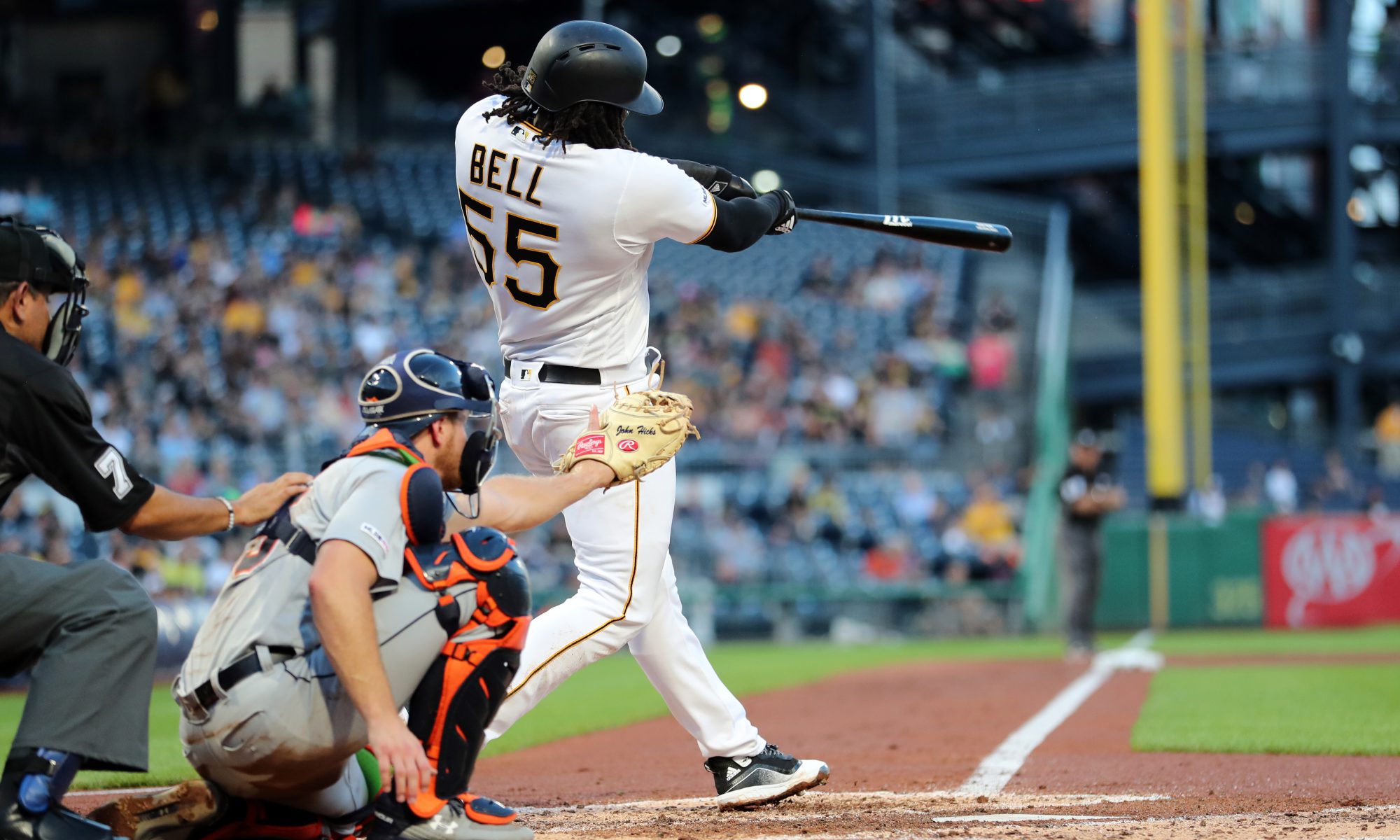 We’ve already passed the halfway mark of the 2019 season, with the Pirates completing 89 games of their 162 game schedule. However, the All-Star break provides that perfect time for any “halfway through the season” stories.

The 2019 season has been a mixed bag for the Pirates. They’ve suffered through more than a season’s worth of injuries already this season, which has hurt them when combined with some players performing below expectations. Still, they’re 44-45 at the break, and less than three games back from the division and a Wild Card spot.

That standing has to do with a successful run by the Pirates recently, combined with the NL Central having a lower division leader than the East and West, and a lot of things that have gone right in Pittsburgh this year to counter the bad.

The key thing, regardless of the preference, is that the Pirates are going to have to finally commit to one of these paths, rather than continuing to play the middle ground, which ultimately ends up back at this stage every year, with a team that’s not really a contender in July, but also not really out of it.

I’ll save that for later this week. For the next two days I’ll be looking at what is going right for the Pirates, along with what is going wrong, in order to provide the best look at where the team should head in the second half. Today we’ll focus on everything going right.

Josh Bell – Any list about things going right for the Pirates has to start with Josh Bell. He’s finally starting to live up to his offensive potential, with a .302/.376/.648 line and 27 homers in 388 plate appearances. He’s already topped his career best for home runs, and there are still about three months left in the season. He’s currently on pace to exceed a 5.0 fWAR, which would make him the first Pirates position player to reach that mark since Andrew McCutchen. That mark would also display a massive step forward for Bell, as most debates about his production before this season wondered if he could hit enough to be a 2-3 WAR player in the future. He’s currently at 2.8.

Bryan Reynolds – While Bell’s season has been huge, the most surprising guy to emerge this year has been Bryan Reynolds. The outfielder was the key return in the Andrew McCutchen trade prior to the 2018 season, and has stepped up big in his rookie season, posting a .342/.414/.536 line in 251 plate appearances for a 2.1 WAR. He’s probably got no chance of winning rookie of the year with Peter Alonso already having 30 home runs, but he should be a contender at least. I don’t know if he will remain at this production level, but he’s shown enough to lock down a starting job in the majors going forward.

Kevin Newman – The Pirates needed one of their shortstop options to step up this year, and Newman has done just that. He’s hitting for a .327/.371/.480 line, showing a bit of power in his game this year, which easily elevates him to a starting MLB shortstop. Even if he doesn’t maintain the power, he could stick in the majors with a high average and OBP, plus his defensive skills at the position and speed on the bases. For perspective on his production, he has a 1.5 WAR, putting him on pace for the second best Pirates shortstop season since 2004, when Jack Wilson had a 4.3 fWAR. Wilson also owns the number two shortstop season in that time, with a 2.5 WAR in 2007.

Adam Frazier – Frazier probably wouldn’t have been on this list a month ago. He has put up good defense at second base all season, but his offense was slow to pick up at the start of the season. Since the start of June, he has hit for a .358/.403/.541 line in 119 plate appearances. He got this starting job with a strong second half last year, following a poor start to the season. Perhaps he’s showing a trend of being a slow starter or a strong finisher? Either way, the Pirates could use another boost from his bat down the stretch this year.

Starling Marte – Marte is an interesting guy to evaluate. He currently ranks third on the team in fWAR at 1.6, and could be headed toward his sixth 3+ WAR season in the last seven years. That’s a good season, and a big accomplishment. The problem is that Marte is capable of more than just a 3 WAR, which makes that production disappointing coming from him. While a 3 WAR pace is great for Frazier and Newman, it’s the low end of the expectations for Marte. Still, if you’ve got a 5+ WAR guy in Bell, a possible 4+ WAR guy in Reynolds, and the potential for 3 WAR guys in Frazier and Newman, then you happily take the additional 3 WAR hitter in Marte. The Pirates haven’t had that kind of group production since the 2014-15 seasons. This would be a good time to give credit to the new hitting coaches as well, since this offense has exceeded expectations from the start of the season.

Felipe Vazquez – The Pirates continue to have one of the best closers in the game in Vazquez. This year he has a 2.11 ERA and 2.67 xFIP, while ranking 6th among relievers in fWAR, fourth in WPA, and eighth in shutdowns. He’s either going to provide them with a great closer option over the next few years if they decide to go for it, or a big trade piece for a future rebuild.

The Back of the Rotation – Joe Musgrove started strong, hit a rough stretch, and has been back on track for the last few weeks. Trevor Williams was pitching well, then got hurt, and has struggled since his return. Jordan Lyles started the season with top of the rotation numbers, but has struggled since, and went down with an injury for a bit, and is about what you want from a back of the rotation guy. Steven Brault, the number six option, has also stepped up at times, before going down with an injury. There hasn’t been consistency with this group — the reason they’re not top of the rotation guys — but the overall production from starters 3-6 in this rotation has been solid, and would stand out more if it wasn’t for injuries and struggles with the top two starters in the rotation.

Today’s Starter and Notes: The Pittsburgh Pirates won 6-5 over the Milwaukee Brewers on Sunday afternoon. The Pirates are on their All-Star break until Friday when they begin a three-game series on the road against the Chicago Cubs. The Pirates will be represented in the All-Star game by Josh Bell, as well as Felipe Vazquez, who was just added to the roster.

The minor league schedule includes Max Kranick, who had his start rained out yesterday. He has a 2.56 ERA, a 1.01 WHIP and a .226 BAA in his last six starts. He has held batters to a .234 average both at home and on the road this season. Due to the rain out, this start has been switched from a home game to a road game. Kranick leads the Florida State League with 87 innings pitched. Bristol is sending out Luis Ortiz, who pitched five shutout innings in his debut, and allowed one run over five innings in his last outing. In his second outing, Ortiz gave up four runs over 3.2 innings. Morgantown has Braxton Ashcraft listed for today. Despite a 6.75 ERA over his first four starts, he has a 1.07 WHIP and a .208 BAA. While GCL probable pitchers are never announced, this should be the second start for first round pick Quinn Priester, who allowed one run over 2.1 innings in his pro debut.

From Indianapolis on Saturday, Jason Martin hits what would have been a home run in most other parks, but he settles for his second double of the game

.@KeBryanHayes with another absolute missile off the bat.

Seven former Pittsburgh Pirates players born on this date, including one that went on to become a Hall of Fame umpire. We will start with John Bowker, who returned to the organization in a trade in 2015, after playing for the Pirates during the 2010-11 seasons. He only played for Indianapolis during his second stint before being released. Also born on this date, 1991 pitcher Rosario Rodriguez, 1985-91 pitcher Bob Kipper, 1955-58 outfielder John Powers and pitcher Jay Parker, who made his only Pirates’ appearance on September 27,1899 and it was one he probably wanted to forget. He started game two of a doubleheader and was so erratic on the mound, he was pulled after facing two batters. He walked both and both scored, in what turned out to be his only Major League game.

Hank O’Day pitched for the Pirates back in 1885 when the franchise was still in the American Association and the club’s nickname was still the Alleghenys.  He went 5-7 in 12 starts, completing all 12 games. In his seven-year career, he had a 73-110 record on the mound, but he made his name behind the plate. O’Day umpired for 30 seasons, plus five other years he filled in the position a handful of times. He was the umpire for ten World Series, including the first one, which included the Pirates. It took awhile, but the Hall of Fame finally recognized his value in 2013.

Finally, Harry Gilbert was born on this date in 1868 and his Major League career lasted one day, but he actually played two games. On June 23, 1890, the Alleghenys/Pirates played a doubleheader in Philadelphia and used both John Gilbert and Harry Gilbert for their double play combo, the first pair of siblings to play together for the Pirates. Harry was the second baseman and he went 2-for-8 at the plate. He had two singles and scored a run, while playing flawlessly in the field. You can read more about that day in an article I wrote here.