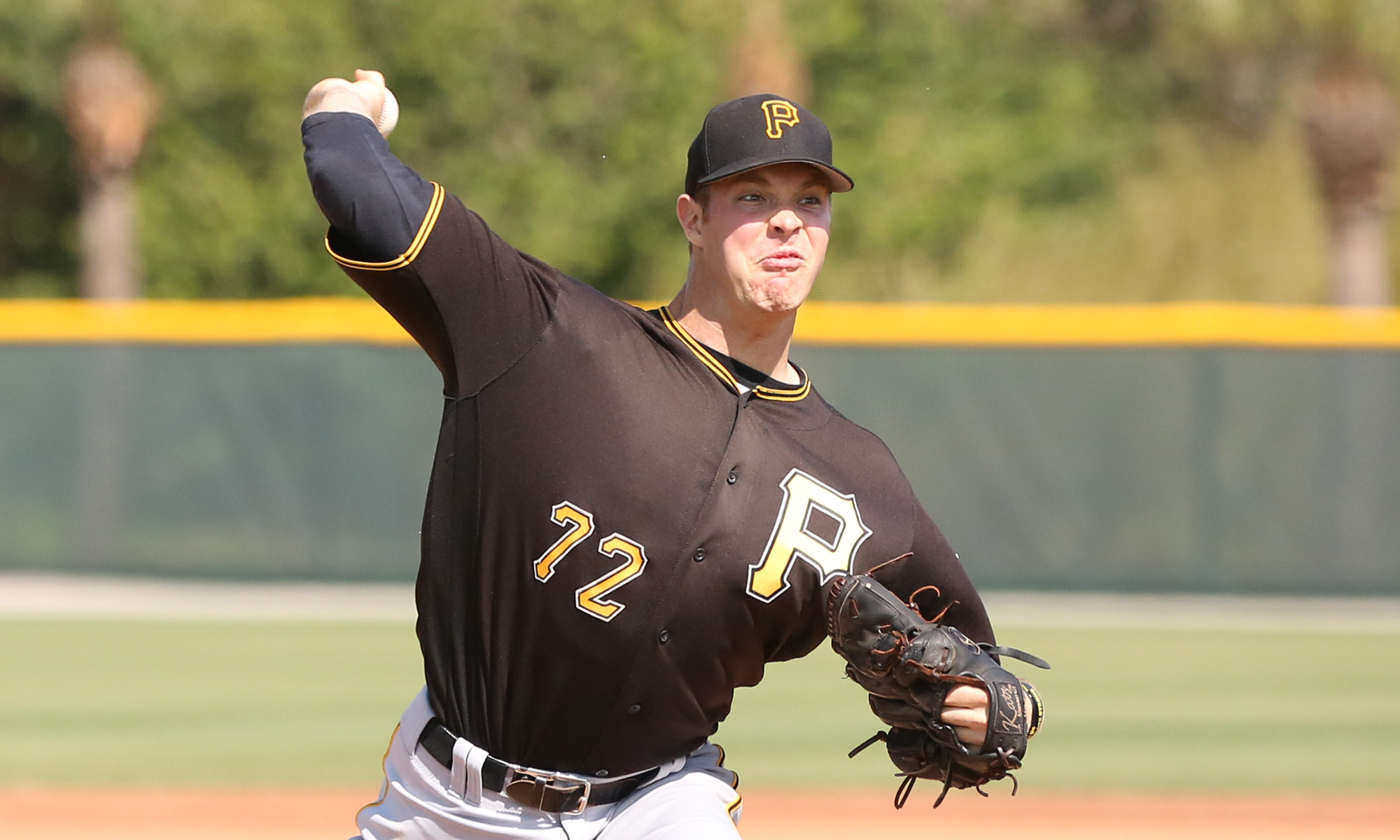 Indianapolis won 1-0 over Syracuse in a game that had three hits total. James Marvel made his fourth start in Triple-A and threw shutout ball for the third time. He’s had just one bad inning, which has him at a 1.90 ERA for Indianapolis. This wasn’t the best from Marvel either, as he walked four batters (one intentional) and threw two wild pitches. He struck out seven. Montana DuRapau and Dovydas Neverauskas combined to retire the final nine batters.

The offense for the Indians was obviously light. Ke’Bryan Hayes hit his 24th double and then scored the lone run on a balk after he stole his tenth base of the season. A single by Hunter Owen was the only other hit. Jake Elmore and Christian Kelley each had a walk.

The Curve had seven hits, getting one each from the first seven batters in the lineup. Bligh Madris hit a triple and drove in two runs. He also drew one of the two Altoona walks. Mitchell Tolman had a single, walk, HBP and a run scored. Chris Sharpe hit his sixth double since joining the Curve, giving him 22 doubles on the season. Sharpe and Bralin Jackson each picked up an RBI.

Bradenton won 2-1 over Clearwater. Coming into this game, Brad Case had two straight starts with five runs on seven hits and two walks. He somehow managed to give up seven hits and two walks for a third straight game, except this time he threw six shutout innings. Case had just one strikeout, but managed to post a 12:4 GO/AO ratio, while throwing 62 of 99 pitches for strikes. Shea Murray took the seventh inning and threw a scoreless inning before giving up a solo homer in the eighth. He stayed on for the ninth and worked around a walk for his second save.

Oneil Cruz had a single and an RBI on his first triple. Jesse Medrano drove in the other run with a solo homer, his third of the season. Deon Stafford and Raul Hernandez each had two hits. Lucas Tancas had a single, walk and run scored. The Marauders struck out 13 times, with every spot in the lineup contributing at least one.

Greensboro won 3-2 over Asheville. Osvaldo Bido started and went six solid innings, giving up two runs on five hits and two walks. He had just one strikeout, while throwing 59 of 84 pitches for strikes. Cristofer Melendez, Cam Alldred and Yerry De Los Santos each followed with a scoreless frame. De Los Santos picked up his seventh save and lowered his ERA to 1.93 through 34.2 innings, with 48 strikeouts.

Morgantown won 8-2 over Batavia. Noe Toribio had an outstanding start and four players had big games on offense. Toribio tossed five shutout innings on one hit and one walk, with three strikeouts. He now has a 2.40 ERA in 30 innings. Bear Bellomy allowed his first runs as a pro. He went three innings, giving up two runs, while recording five strikeouts. Oliver Garcia made his Morgantown debut and tossed a scoreless frame.

Jared Triolo had a big game, going 3-for-5 with his 11th double. He scored three runs and drove in a pair. Kyle Wilkie went 4-for-4 with two RBI’s. Brendt Citta missed a cycle by the double. He only got three at-bats though, walking in his other plate appearance. Citta scored twice and drove in three runs. Blake Sabol had three singles. On the flip side, Brett Kinneman went 0-for-5 with five strikeouts and left nine men on base.

Bristol lost 9-2 in game one of a doubleheader against Burlington. Dante Mendoza was originally supposed to start Monday, but two days later at a different location, he had his worst outing of the season by far. Mendoza lasted just two outings, giving up seven earned runs on one hit, four walks and two hit batters. He threw 35 pitches, with only 11 going for strikes. Alex Roth followed and let two inherited runs scored before recording the final out of the first inning. He stayed on for two more scoreless innings. Ryan Troutman was next and he gave up two runs over two innings. Saul de la Cruz handled the seventh.

The Pirates had just four hits and a walk. Ernny Ordonez and Fernando Villegas each hit doubles. It was the eighth of the season for Ordonez, who drove in a run and also scored a run. Eli Wilson and Marshall Gilbert each hit singles, with Wilson driving in a run. Josh Bissonette drew the walk.

In game two, Adrian Florencio got the start and he tossed 4.1 shutout innings on four hits, three walks and five strikeouts. He threw 44 of 77 pitches for strikes. It’s his first shutout appearance in six starts as a pro. Yordi Rosario followed with 1.1 innings, serving up three runs on three hits, before giving way to Matt Eardensohn. After recording the final out in the sixth, Eardensohn allowed a run in the seventh and an unearned run in the eighth for the 5-4 loss.

The Pirates scored three runs in the first inning on Aaron Shackelford’s fourth home run. They added another run in the fourth inning on an RBI single by Jean Eusebio. Seven players contributed one hit each. Joseivin Medina had a single and a walk. Francisco Acuna singled, got hit by a pitch, scored a run and stole his sixth base.

The GCL Pirates won a rain-shortened game 3-0 over the Rays. Arlinthon De Dios got the start and tossed five shutout innings on three hits and three walks, while picking up four strikeouts. Lizardy Dicent and Willy Basil each tossed a scoreless frame before the game was called due to rain in the middle of the seventh.

Deion Walker made his pro debut and reached base all three times, recording a triple, then getting plunked twice. He scored a run. Walker was the final player signed during this year’s draft. After being selected in the 35th round, he received a $200,000 bonus. Angel Basabe hit a single, double and recorded the lone RBI of the game. The Pirates scored their first run on a throwing error and their second run on a wild pitch. Sammy Siani had two walks and scored a run. He has walked 15 times in 17 games.

The DSL Pirates1 lost 7-2 to the Rays2. Joelvis Del Rosario started and allowed two runs (one earned) over 2.2 innings. He now has a 5.01 ERA over 32.1 innings this season. Antonio Gonzalez followed with three runs over two frames. Wilkin Valdez gave up one run over 2.1 innings, with four strikeouts. Raul Mora allowed an unearned run over the final two innings.

Luis Tejeda had a nice day at the plate, but not in the field. He went 2-for-5 with a single and his second triple, driving in both runs. He also committed two errors to give him 16 on the season. Segio Campana walked twice and scored a run. Eliazer Montero and Ronny Sanchez each hit their third doubles.

The DSL Pirates2 moved to 37-8 on the season with a 2-1 win over the Giants. Miguel Toribio started and went five innings with one unearned run on four hits, a walk and three strikeouts. Wilbur Martinez lowered his ERA to 7.41 by having his best appearance of the season, throwing four shutout innings.

The Pirates had five hits, all singles, and four walks. Bryan Mateo led the way with two hits and an RBI. Alexander Mojica had two walks and a run scored. Jommer Hernandez had a single and a walk. Carlos Arroyo stole his tenth base.