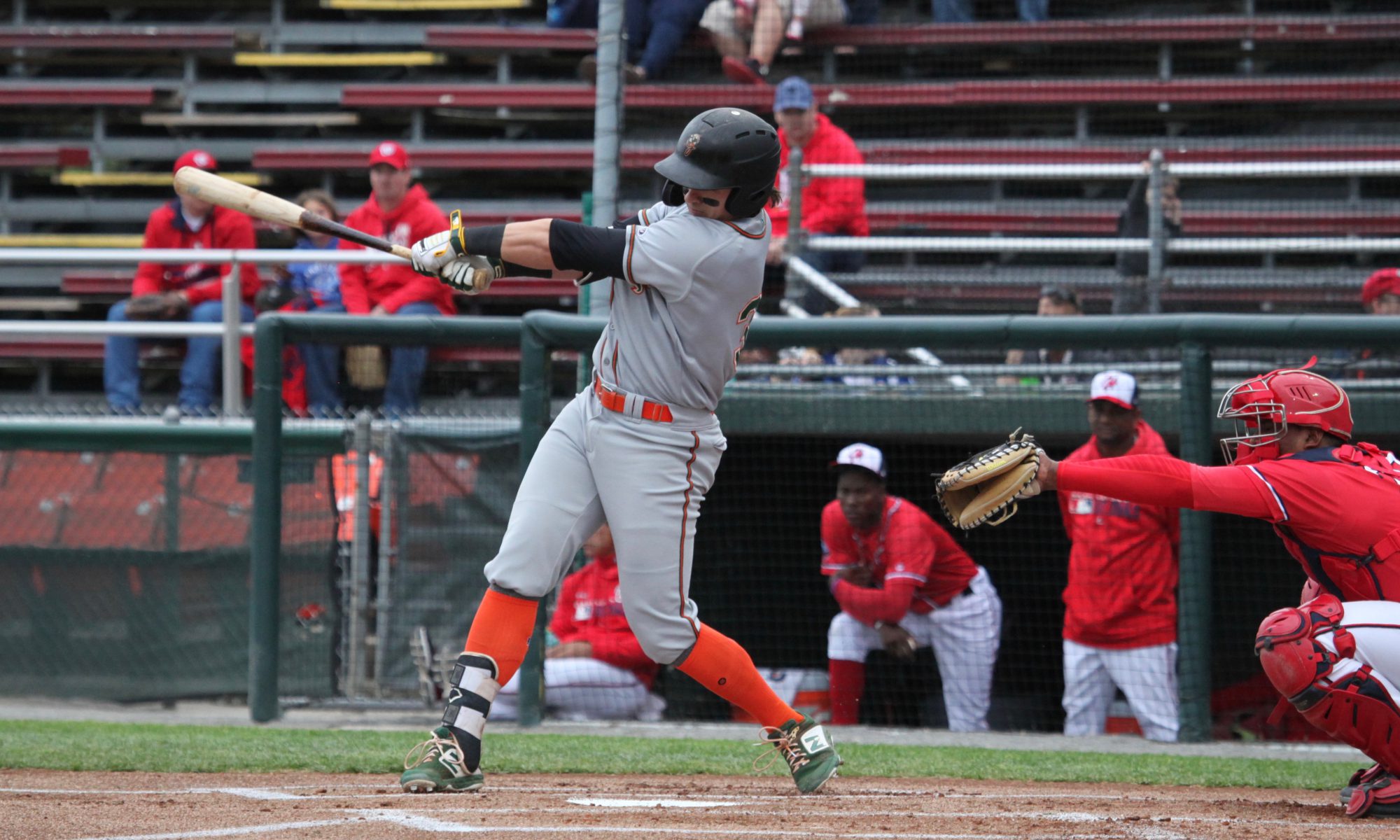 Indianapolis lost to Toledo, 9-6, in ten innings.  Cam Vieaux struggled through four innings on 81 pitches, allowing four hits, four walks and four runs.  Sean Keselica followed with four innings and gave up just one run, but unfortunately it tied the score at 5-5 in the seventh.  It stayed that way until the tenth, when Tyler Lyons got torched for four runs, one unearned because it was the free runner.  J.B. Shuck got the last two outs, although he also let one of Lyons’ runs score.  The Indians loaded the bases with nobody out in the bottom half, but scored only once.

Jason Martin led the offense with two doubles, giving him 14 on the season, and a sacrifice fly.  Rehabbing Erik Gonzalez, also had two hits, including a double.  Another rehabber, Gregory Polanco, was 0-for-3 with two walks.  Cole Tucker hit his ninth double and Kevin Kramer had a single and three walks.  Ke’Bryan Hayes had a hit and a walk.

Pablo Reyes departed after getting hit on his left hand by a pitch.  Judging by his reaction, it could be more than a minor issue, but we’ll have to see.

Altoona was rained out. They will make the game up as part of a doubleheader on July 23rd.

Bradenton lost to Florida, 2-0.  The Marauders had seven hits and a walk, but produced nothing with them.  Deon Stafford, Lucas Tancas and Adrian Valerio each had two hits.  Stafford’s were both doubles, giving him six on the season.  Gavin Wallace started and gave up two runs over six innings.  Shea Murray had a strong relief appearance, striking out six in three innings while allowing just a hit and two walks.  Murray’s had a rough time overall this year, due to severe control problems.  In his last four outings, though, he’s allowed no runs, three hits and four walks in eight innings, while fanning 15.

Greensboro won the completion of its suspended game from last night, 9-4.  The game was suspended after two innings with the Grasshoppers up 5-2, thanks largely to a grand slam by Connor Kaiser.  The home run was his fifth and he also had a single.  Mason Martin had a single and a homer as well, in his case his 22nd longball.  Ji-Hwan Bae and Fabricio Macias also had two hits apiece.  Martin (who runs better than you’d think), Bae and Kaiser also had steals, their 8th, 13th and 4th, respectively.

Greensboro also won the regularly scheduled game, 2-1, in eight innings.  (Due to the suspended game it should have gone seven innings.)  Steven Jennings started and gave up a run in five innings while throwing 44 of 73 pitches for strikes.  Jennings allowed four hits and two walks, and struck out five.  Will Gardner went the rest of the way, retiring all nine hitters he faced.  That included stranding the free runner in the eighth.

Martin went deep again, hitting his 23rd home run to tie the game in the sixth.  As I write this, he leads the league in homers by eight and RBIs by 23.  The other run came in the bottom of the eighth on a one-out, walkoff single by Kyle Mottice that scored the free runner.  Greensboro had only four hits, with Mottice getting two and Justin Harrer the remaining one.

Morgantown was rained out. They will make the game up as part of a doubleheader in August.

Bristol got a three-run home run in the eighth from Brendt Citta to beat Greeneville, 5-3.  The blast was Citta’s second of the season.  In fact, all of the Pirates’ runs came on second home runs, the others being solo shots by Aaron Shackelford and Samuel Inoa.  Shackelford also had a single and his seventh double, leaving him with a line of 340/441/600.  Inoa had two hits, as did Jesus Valdez.

Santiago Florez got off to a shaky start, giving up a two-run home run (with one run being unearned) in the first and another run in the second.  He followed that, though, with three scoreless innings.  For the day he allowed three hits and two walks, and struck out five.  Yoelvis Reyes followed with three scoreless innings, allowing just one runner and that on an error.  He struck out three.  Oliver Garcia tossed the ninth, striking out two, for a save.  After an alarmingly bad start, Bristol is now 10-8.

The GCL Pirates lost to the Orioles, 3-2, in ten innings.  They had a 2-1 lead in the ninth, but Julio Rosario and Saul De La Cruz combined to load the bases on two walks and a hit batsman, and De La Cruz wild pitched in the tying run.  The Orioles got the free runner home in the tenth and the Pirates couldn’t answer, despite getting the free runner to third with one out.  The late-inning failures wasted a strong start from Emanuel De Los Santos, who threw five shutout innings, giving up three hits and a walk, and fanning five.

The offense didn’t want for opportunities, thanks in large part to six walks.  Unfortunately, they went 2-for-15 with runners in scoring position.  Sammy Siani had his best pro game so far, going 2-for-3 with two walks and his first steal.  Yoyner Fajardo had three hits and his seventh steal.

The DSL Pirates1 blanked the Rays2 on a one-hitter, 6-0.  After struggling through his first four outings, Listher Sosa threw six shutout innings, allowing just the one hit, walking none and fanning seven.  Antonio Gonzalez followed with two scoreless innings and Kelvin Disla, in his pro debut, threw a scoreless ninth.  Disla signed with the Pirates recently and is debuting this season, instead of next season, because he’s 18.

The DSL Pirates2 ran their record to 25-6 with a 5-2 win over the Royals2.  Alexander Mojica connected for a two-run home run.  His six homers are tied for second in the DSL and his .649 slugging average leads the league.  The players tied or ahead of Mojica in longballs are 18 and 17; Mojica is 16.  He also has three more walks than strikeouts.  Jommer Hernandez had three hits despite not starting the game.  Randy Romero had two, plus his 17th steal.

Starter Jorge Ramos gave up seven hits and a walk in three and two-thirds innings, but escaped with just two runs allowed, one unearned.  He did fan five.  Miguel Toribio threw three and a third scoreless innings in relief.