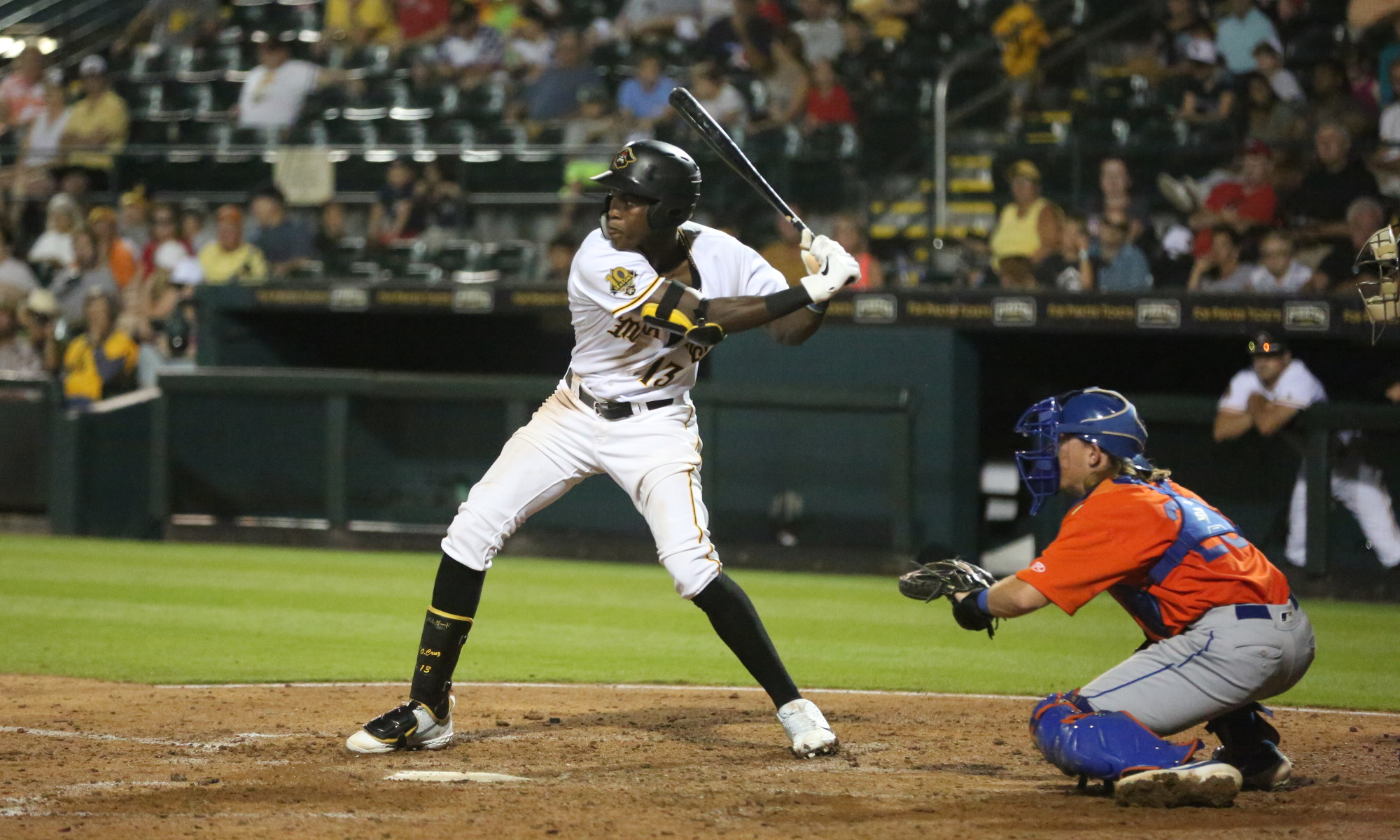 Indianapolis lost 7-6 to Louisville. Dario Agrazal got the start and went just one inning, allowing two runs on two hits. There was no word of an injury and he threw just 19 pitches, so this may have been just a throw day to set him up for something over the weekend. It’s possible that it was a break with his innings because he missed time in each of his last two years and is on pace for a career high in innings. If there’s an update we will post it. Yefry Ramirez followed with five runs on six hits and four walks in 3.1 innings. Despite the damage, he managed to pick up seven strikeouts.

Luis Escobar was next and he threw 2.2 shutout innings on two hits and five strikeouts. Sean Keselica had two strikeouts in a scoreless eighth.

Trayvon Robinson had a big day at the plate, collecting three hits and driving in two runs. He had a double, triple, walk and run scored. Darnell Sweeney brought home two runs with his third double. Jason Martin had two hits, a run scored and an RBI. Will Craig picked up his 49th RBI. Jake Elmore hit his 18th double. Erik Gonzalez went 1-for-5 with a run scored and two strikeouts. He has a .126 OPS (1-for-16, no walks) in five rehab games.

Altoona won 6-4 over Akron. Pedro Vasquez was just named as our Pitcher of the Month for June after he allowed three runs in 31 innings last month. He’s going to need to pitch even better the rest of July if he expects to get that monthly title again. Vasquez allowed four runs on seven hits and a walk in six innings of work on Wednesday night. He threw 107 pitches (yeah, that’s a very high total in the minors), with 68 going for strikes. Joel Cesar followed with two shutout innings to pick up the win. Matt Eckelman recorded his 15th save with a scoreless ninth.

The Curve got two RBIs apiece from Robbie Glendinning, Bligh Madris and Chris Sharpe. Glendinning had a sacrifice fly and his sixth double since being promoted. Sharpe hit his third homer for Altoona. He had five with Bradenton. Madris hit his fifth homer and his 17th double. Jared Oliva had two singles and two stolen bases to give him 20 steals on the year.

Bradenton lost 7-2 to Jupiter. Hunter Stratton was trying to recover from a rough June that saw him post a 9.00 ERA and a WHIP over 2.00 in 14 innings. That turn around is going to have to wait for his next outing because he served up six runs on seven hits and a walk in 4.1 innings. Joe Jacques followed with one run over 2.2 innings. Ike Schlabach threw two scoreless innings in his second game back after missing time due to taking a line drive off of his pitching arm.

The Marauders got all of their offense on a first inning swing by Oneil Cruz, who hit his first home run since returning from his foot fracture. His two-run shot was his second of the season. Travis Swaggerty went 1-for-3 with a walk and his 14th stolen base. He scored on the Cruz homer. Lolo Sanchez had a single and stole his fifth base since joining Bradenton. Dylan Busby had a single and a walk. Bradenton struck out 14 times in the game.

Greensboro lost to Hagerstown 3-2 in 11 innings.. Colin Selby got the start and went five innings, giving up one run on five hits and two walks. He had three strikeouts, a 7:2 GO/AO ratio and threw 84 pitches, with 59 going for strikes. Selby now has a 3.27 ERA through ten starts. Will Gardner allowed an unearned run in his lone inning. He walked three, struck out two and threw 39 pitches. Cam Alldred threw a scoreless seventh and Cristofer Melendez handled the eighth to keep it a 2-1 game. After Greensboro tied it, Melendez got them to extra innings with his second shutout inning. John O’Reilly threw shutout ball in the tenth, then lost it in the 11th on a walk-off single.

The Grasshoppers scored a run in the sixth on Michael Gretler’s second home run of the season. They tied the game in the ninth on an error and an infield single by Jack Herman, but they couldn’t score in the 11th with the bases loaded and no outs. Gretler’s homer was the only extra-base hit. He also added one of four singles by Greensboro. Mason Martin had the only two walks. The Grasshoppers went 1-for-11 with runners in scoring position and struck out 14 times.

Morgantown won 2-1 over Auburn on Wednesday afternoon. Jesus Valles made his fourth start and it was easily his best outing. In five innings, he gave up one run on five hits and no walks. He had one strikeout, an 8:3 GO/AO ratio and needed just 58 pitches to get through his day, with 43 going for strikes. Tenth round draft pick Cameron Junker followed with two shutout innings, throwing 20 of 26 pitches for strikes. Mike LoPresti took over in the eighth and made things interesting by loading the bases in the ninth before getting the save.

The Black Bears tied the score 1-1 in the fifth inning on a Dean Lockery sacrifice fly that brought home Luke Mangieri. Ryan Haug gave them a 2-1 lead in the seventh inning with a single that scored Blake Sabol, who reached on his second triple. Sabol had two of Morgantown’s five hits in the game, and his triple was the only extra-base hit.

Bristol won 7-4 over Kingsport. Jose Maldonado made his third start and this one was a strong performance. He threw five shutout innings on two hits and two walks, with a career best six strikeouts. Maldonado was a little shaky in his debut, but he gave up just one run on two hits over five innings last time out. Trey McGough retired all six batters he faced, three of strikeouts. Luis Arrieta tossed a scoreless eighth, then gave up four runs (three earned) in the ninth. The last three runs charged to Arrieta scored off of Alex Roth, who recorded the final three outs.

The Pirates had five players collect two hits. Daniel Rivero had two singles, a stolen base and a run scored in the lead-off spot. Aaron Shackelford had a double and his first pro home run. He drove in two runs, scored twice and also drew a walk. Ernny Ordonez went 2-for-5 with two runs scored. Josh Bissonette had two hits, two stolen bases, an RBI and a run scored. Mariano Dotel had a single, double, RBI and run scored, but he was injured on a play in the ninth and had to leave the game.

The GCL Pirates won 3-2 over the Red Sox. Arlinthon De Dios started and threw five shutout innings on four hits and a walk, while striking out five batters. He was followed by Mario Garcia, making his debut in the U.S. The 20-year-old from Mexico gave up two runs on three hits and two walks in 2.2 innings. He was followed by Angel Suero, who tossed 1.1 scoreless.

The Pirates got their first run on a third inning ground out by Nick Garland. Juan Pie scored the second run an inning later when he stole third base and came home on a throwing error. The third run scored on an error. Basically, they won on small ball and help from the defense. Jase Bowen (11th round pick) had two hits and scored a run. He had two hits in his debut on Monday. Sammy Siani (37th overall pick) went 0-for-3 with a walk. He’s 4-for-20 with four singles and two walks in his first five pro games. Juan Pie was 1-for-4 with a single and two steals. Norkis Marcos hit a double and stole his third base.

The DSL Pirates1 lost 5-4 to the Indians. The Pirates scored four runs in the top of the ninth, only to see Yeison Santos allowed a two-out home run for the walk-off loss. Andy Maldonado got the start and allowed two runs over three innings. He pitched into the fourth, but didn’t record any outs. Jordy Ortega came on and stranded two runners, but later gave up two runs of his own. Wilkin Valdez tossed 2.1 shutout frames, while Santos allowed the one run in the ninth.

The Pirates were quiet until that ninth inning rally and even that was with some help. Three straight walks to open the inning, loaded the bases. Bladimir Susana singled home two runs, then Fleury Nova brought in the third run. A wild pitch scored Susana with the tying run. The Pirates had five walks and all hits, all of them singles. Nova had two hits, Shendrik Apostel had two walks. Juan Jerez ($380,000 bonus), Eliazer Montero and Ronny Sanchez each had a walk and a single.

The DSL Pirates2 won 13-1 over Colorado. Sergio Umana made his sixth start of the season and for the third time he threw shutout ball. He gave up six hits, with no walks and four strikeouts. In 29.2 innings, he has a 2.43 ERA, with two walks and 32 strikeouts. Miguel Diaz followed with one run over three innings, while Wilbur Martinez tossed shutout ball in the ninth.