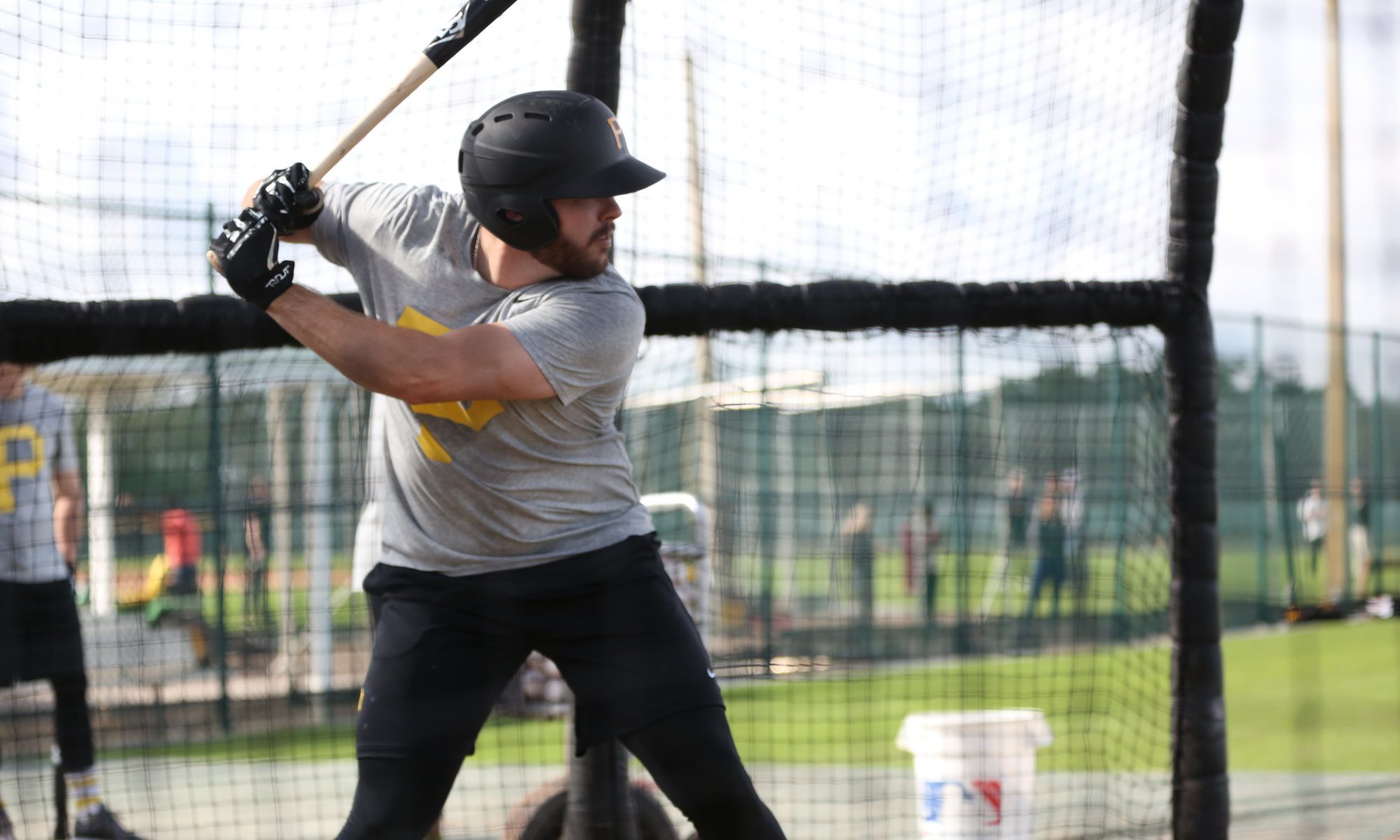 Indianapolis won 3-2 over Columbus. James Marvel got the start and couldn’t match his previous two outings, which were both six shutout innings on one hit. He still had a solid performance though, going six innings, with two runs on three hits and a walk, with six strikeouts and a 5:2 GO/AO ratio. Marvel now has a 2.12 ERA in 29.2 innings with Indianapolis. Parker Markel, who was picked up via a waiver claim over the weekend, made his debut with the Pirates. He followed Marvel with a quick seventh inning, getting two strikeouts (one was Max Moroff) and a ground out on ten pitches. Dovydas Neverauskas handled the final two innings, striking out four batters.

The Indians got their scoring started in the third inning on a fielding error that allowed Jason Martin to score. That was followed by a fourth inning home run from Kevin Kramer and a walk-off homer in the ninth by Will Craig. It was the eighth for Kramer and 20th for Craig, who played his fifth game in right field. Martin was the only player with two hits, both singles. Hunter Owen hit a single and was hit by a pitch. Indianapolis failed to draw a walk.

Altoona had to complete a suspended game from May 30th. In a very odd (I won’t say dumb, but it’s implied) twist to this game, it counts towards the first half standings, as the Eastern League went to a split schedule this year. Every other split schedule league cancels games that can’t be played before the first half ends, so this game was meaningless for the Curve, other than stats.

James Marvel actually started this game, tossing two shutout innings back on May 30th. Yeudy Garcia took over with a 6-0 lead when the game resumed and he threw four shutout frames. Jesus Liranzo handled a clean seventh inning to finish the game off.

All of the runs scored back on May 30th, but Mitchell Tolman finished off a 4-for-4 night with two runs scored and an RBI. Brett Pope drove in two runs. It was a tough resume for Jared Oliva, who gets an 0-for-4 with three strikeouts added to his earlier totals. Oneil Cruz went 0-for-2 in his first game.

In the regularly scheduled game, Domingo Robles got the start and he went the distance, though it didn’t end well. In the bottom of the seventh with a 3-2 lead, he gave up a walk-off hit for the complete game 4-3 loss. Robles allowed four runs on nine hits in 6.1 innings, with no walks and five strikeouts. He threw 94 pitches, with 62 going for strikes. Robles now has a 5.06 ERA through 12 starts with Altoona. That’s nearly double the ERA he had with Bradenton (2.61) in ten starts this season.

Oneil Cruz hit two doubles in this game, though he didn’t factor in the scoring. Jared Oliva drove in two runs with a single, but an error on the outfielder turned it into a little league home run, scoring all three Altoona runs. The only other hit was a single by Jerrick Suiter. Altoona didn’t draw any walks.

Bradenton lost 5-0 to Charlotte. Osvaldo Bido made his debut with Bradenton and had a strong outing. He went seven innings, allowing two earned runs on six hits and three walks, with four strikeouts. Two unearned runs scored against him on a Rodolfo Castro error in the fifth. Bido had a 3.55 ERA and a 1.10 WHIP in 20 starts with Greensboro this season. John O’Reilly followed with a scoreless eighth, picking up two strikeouts. Samuel Reyes allowed a run in the ninth.

The offense was ugly in this one beyond the zero runs scored. The Marauders had one walk and 15 strikeouts. They had four hits, with two singles from Deon Stafford, a single from Travis Swaggerty (he drew the lone walk), and a triple by Dylan Busby. Rodolfo Castro not only had the costly error, he went 0-for-3 with three strikeouts.

Greensboro had off on Tuesday.

Morgantown lost 6-2 to Staten Island. Braxton Ashcraft got the start and he went six innings, allowing four runs (three earned) on five hits, with three walks and five strikeouts. He posted a 7:3 GO/AO ratio. This was the second time in his career that he pitched six innings. Ashcraft threw 87 pitches, 54 for strikes. Trey McGough was out next, making his Morgantown debut. He posted a 1.04 ERA in 17.1 innings with Bristol. He equaled his earned runs allowed in one innings, giving up two runs in the seventh. Elvis Escobar moved his rehab up from the GCL and tossed a scoreless inning with one hit and one strikeout. Oliver Garcia made his second scoreless appearance in the ninth since being promoted from Bristol.

The Black Bears continued a common theme from today with low walk/high strikeout totals. They had two base on balls and 12 strikeouts. Dean Lockery had three hits in the ninth spot in the order. Nick Patten batted eighth and collected two hits. The rest of the lineup went 3-for-27 with no one reaching base more than once.

Bristol lost 8-7 to Greeneville. Dante Mendoza was hurt by the long ball in this game. He went four innings, allowing five runs on four hits and a walk, with five strikeouts. Three of those four hits were home runs. Matt Eardensohn was out next and he went four innings, allowing two runs, with one of them being earned. Samson Abernathy took over in the ninth with a 7-7 score and gave up an unearned run.

The Pirates got their scoring started in the fourth with consecutive RBI ground outs from Aaron Shackelford and Francisco Acuna. They trailed 5-0 going into that inning. In the sixth, Shackelford collected a second RBI ground out, followed by an RBI single from Acuna. Matt Morrow then brought home Acuna with a double. The Pirates scored again in the seventh on a sacrifice fly, then added a seventh run in the eighth inning on an RBI bunt single by Jean Eusebio. Jake Snider had two hits and scored two runs. Fernando Villegas had two hits, a walk and two runs scored. Jean Eusebio had two hits.

The GCL Pirates lost 10-4 to the Braves. Arlinthon De Dios got the start and went five innings, allowing four runs on seven hits, with no walks and six strikeouts. He now has a 3.62 ERA through 27.1 innings. Starlyn Reynoso was out next and he served up three runs in the sixth, while recording just two outs. All three of those runs scored off of Bryan Torres, who also gave up three runs of his own on six hits in 1.1 innings. Hai-Cheng Gong threw two scoreless innings.

The Pirates got on base often in this game, collecting nine hits and getting hit by three pitches. Yoyner Fajardo had a single, double, HBP and a run scored. His .358 average ranks third in the league and he leads the GCL with 34 hits. Angel Basabe had a double, HBP and a sacrifice fly. Deion Walker had an RBI single, which was their only hit in 11 at-bats with runners in scoring position. Tilsaimy Melfor had two hits and a run scored.

The DSL Pirates1 lost 6-1 to the Rangers1. Valentin Linarez got the start and tossed four shutout innings to give him a 2.11 ERA through 42.2 innings this season. The 19-year-old, 6’5″ right-hander, had a 3.86 ERA in 39.2 innings last year as a rookie. Wilkin Valdez allowed three runs over the next two frames. Yeison Santos was charged with an unearned run in his two innings. Argenys Dominguez faced four batters and allowed three walks and a hit. He now has a 19.55 ERA in 9.2 innings over 11 appearances, with 21 walks and 13 strikeouts. Jordy Ortega faced just two batters to record the final two outs.

The Pirates had six hits and two walks, while going 1-for-8 with runners in scoring position. Luis Tejeda had two hits. Jose Berroa hit his fifth double and picked up his 15th RBI. Eliazer Montero hit his fifth double. Juan Jerez had a single and his fifth stolen base.

The DSL Pirates2 moved to 42-8 with a 10-4 win over the Mariners. Sergio Umana had a rare rough outing, going 4.1 innings, with four runs (three earned) on five hits and three walks, with three strikeouts. He now has a 2.76 ERA through his first ten starts. Johan Montero dropped his ERA to 1.23 over 28.2 innings with two scoreless frames. Enmanuel Mejia, who should be in the U.S. already, threw a scoreless eighth inning. He has thrown 12.2 scoreless innings with two hits and 23 strikeouts. Darvin Garcia tossed a scoreless ninth in his second game as a pro. He was a July 2nd signing this year.

Randy Romero had three hits, a walk and a HBP. He went 5-for-5 twice last week. Romero scored three runs on Tuesday, and stole three bases. He is batting .417 and he’s 27-for-27 in steals. Carlos Arroyo had two hits, two runs scored and his 11th stolen base. Alexander Mojica had a single, RBI, run scored, HBP and two walks. Rodolfo Nolasco drove in three runs. Juan Mena had three hits and an RBI.