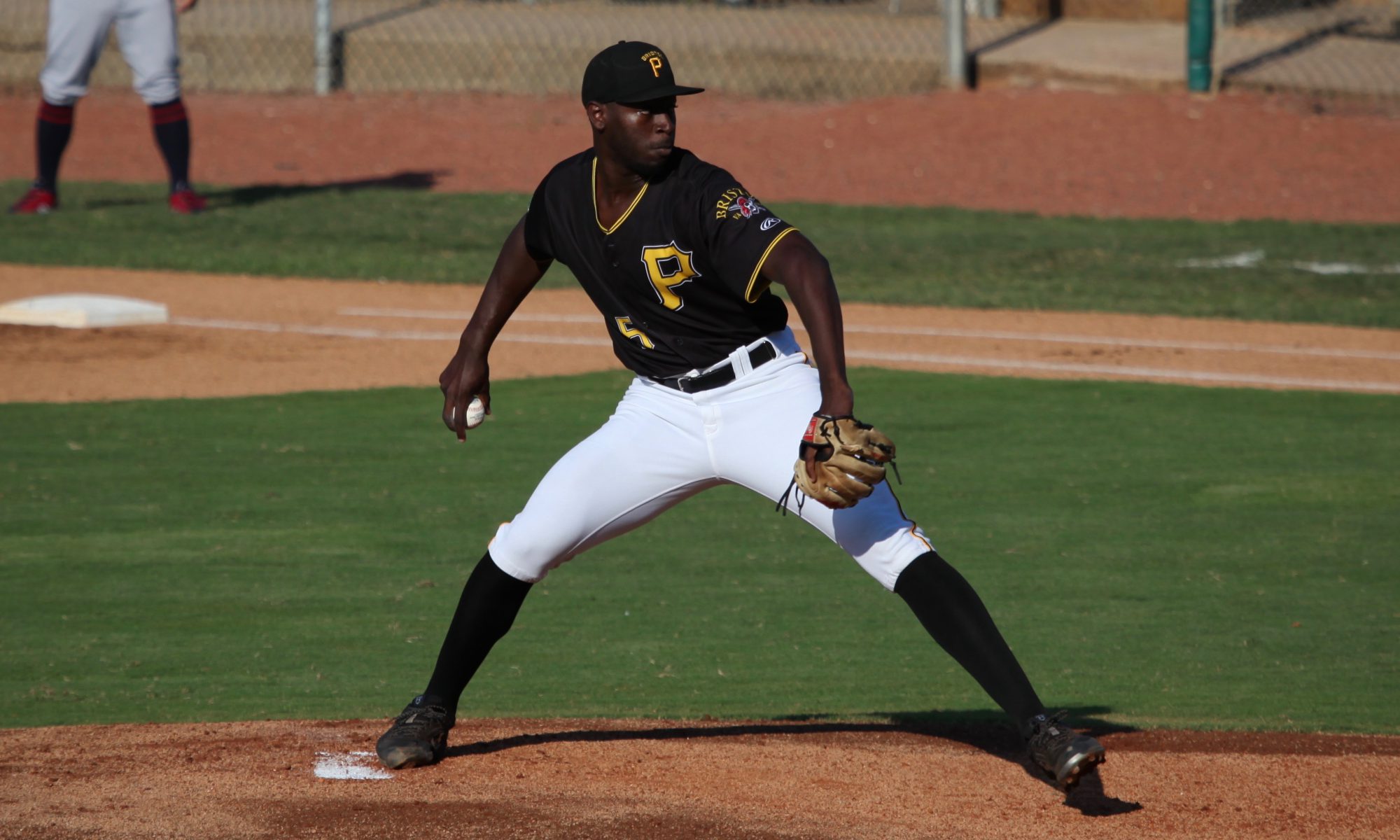 And now for the good part after yesterday’s recap of the hitters.  What upside the Bristol team has you’ll find mainly in the rotation.  The Pirates are currently going with a six-man rotation:  Luis Ortiz, Santiago Florez, Tahnaj Thomas, Jose Maldonado, Adrian Florencio and Dante Mendoza.  Of the six, the most notable are arguably Ortiz, Thomas and Florez.  I was fortunate to catch the first two, along with Maldonado, in the three-game weekend series against Elizabethton.  I also saw eight of the Bristol relievers (they have 17 pitchers on the roster).

Luis Ortiz:  Ortiz pitched the Friday game and threw five shutout innings, giving up four hits and two walks, and striking out six.  He sits at 93-94 mph and touch slightly higher.  His secondary pitches are the opposite of the norm:  his best pitch, at least based on the one game, is a change, while his curve could use some work.  The change probably explains why he has a slight reverse platoon split.  Ortiz is listed at 6’2″, 165, but he looks like he’s filled out some since that was recorded.  One interesting thing about Ortiz is that he’s in his first pro year.  He was 19 when he signed and the Pirates sent him directly to Bristol, skipping both the Dominican Summer League and Gulf Coast League.  Despite that, his command is good.  He had a couple brief stretches when he wasn’t throwing strikes, but he recovered fairly quickly.

Tahnaj Thomas:  Thomas (pictured above) pitched the Saturday game, throwing five shutout innings while allowing three hits.  He walked nobody and struck out seven.  John Dreker has already posted Thomas’ velocity readings.  To recap, he sat at 97-99 and reached triple digits several times, accompanying all that with a very effective slider.  He also threw a change that appeared at least useful.

The interesting thing about Thomas, though, is that he came into this season as a converted hitter who’d had trouble throwing strikes during his limited mound experience, who then had control meltdowns in his first two starts this year.  And now he’s walked exactly one in his past five starts.  His command was good in this start, as well.  He got behind only a couple times and when he missed, it wasn’t badly.  At times, he caught left-handed hitters looking at pitches knee-high on the outside corner.  I think they were back-door sliders, but they may have been changeups; either way, for a pitcher at this level with his experience, that’s impressive.  One thing helping Thomas’ command may be his motion, which is relatively simple and has few moving parts.  He just reaches back and brings it forward.  That’s not to say his command can’t improve.  His velocity was enough to throw the ball by hitters fairly often, but when he got too much of the plate the hitters got some wood on it; most of the in-play outs were flyballs.  Nothing was driven deep, though, and the hits were all singles.

Along with everything else, Thomas is 6’4″, appears to be very athletic, just turned 20, and has a good-sized frame that may allow him to continue getting stronger.  In my opinion, right now he’s a top five prospect in the system.

Jose Maldonado:  Maldonado started Sunday and had one bad inning, giving up four runs in the third.  He lasted four innings, giving up the four runs on five hits and three walks, while striking out four.  He throws 92-94, touching higher, with a good curve.  His change didn’t look effective.  He looks bigger than his listed 6’2″, 198, and is still just 20, so he may have some projection left.

In this game, Maldonado had trouble throwing strikes.  I don’t know whether he was throwing both a two-seam and a four-seam fastball, but he was mostly trying to locate fastballs low in the zone and was missing low a lot.  When he got the ball up toward the middle, he got hammered.  That’s what happened in the third inning, costing him a two-run triple and a two-run home run on consecutive pitches.  Occasionally he’d come in with high heat, possibly four-seamers, and the hitters couldn’t catch up with it.  Maldonado had trouble with left-handed hitters, as they accounted for all but one of the five hits, including the two big ones.  I thought that might indicate a need for a better change, but on the entire season he actually has a reverse platoon split.

I don’t have a lot of useful observations about the relievers, except that none of them really stuck out.  The team’s two best relievers, Bear Bellomy and Trey McGough, were promoted before this series.  All the relievers threw somewhere from the upper-80s to about 93, often paired with a slider.  Just a few comments:

Samson Abernathy:  Abernathy seemed the most interesting of the relievers.  He threw 90-93 with a funky motion that seemed to make it hard for the hitters to pick the ball up.  He also threw a change and a reasonably good curve.  He seemed to wear down a bit with two outs in his second inning, giving up three straight hits, although two were lefty hitters who beat the shift.

Lizardy Dicent:  Dicent was the most interesting of the team’s relievers coming into the season, mainly because he was throwing in the mid-90s and also . . . Lizardy Dicent.  This year he hasn’t topped 90.

Enrique Santana:  Santana has put up big strikeout numbers both last year and this.  He throws 90-92 with a changeup, but hasn’t had good control, including this game.  He’s only 5’11” and is nearly 22, so there probably isn’t much projection left.