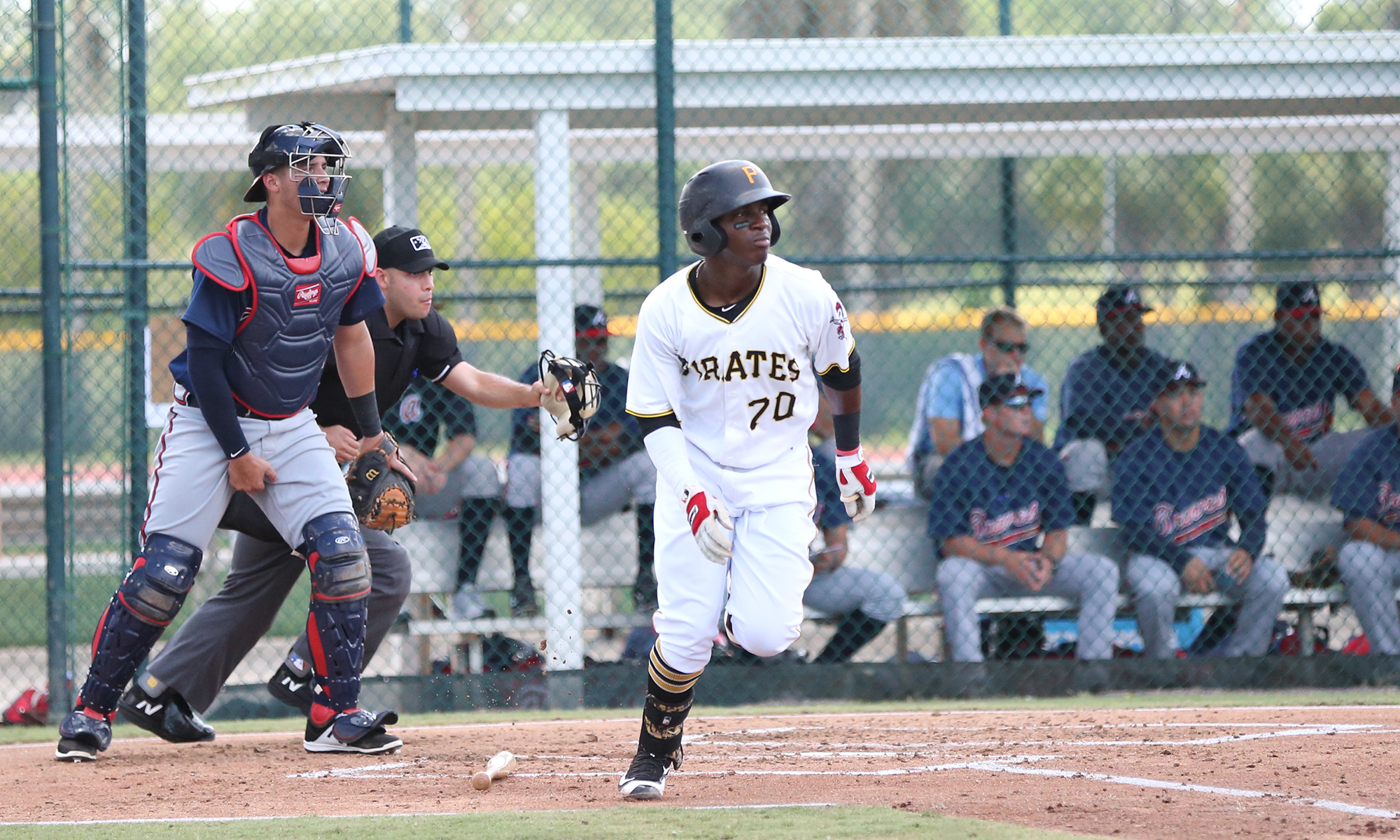 I’ll do three years here.  The Pirates didn’t sign nearly as many players in those years as they have more recently, and they didn’t pay much for any player.  Unlike most of the teams in MLB (including big spenders like Tampa Bay and Oakland), they religiously complied with the limitations on international bonuses.  Most of the players from these years have fallen by the wayside.  I’ll go through the ones who are still around and a few others of note.

Luis Escobar, RHP (CO, $150K):  Escobar has been ranked among the Pirates’ top prospects for several years now due to very good stuff, but he hasn’t been able to overcome a lack of command.  He’s moved to the bullpen and has a good ERA in AAA, but he’s walking 5.5 per nine innings.  He made his major league debut this year, but he has an option left and the Pirates will probably use it next year.

Yeudy Garcia, RHP (DR):  Signed at the relatively late age of 20, Garcia jumped into the Pirates’ top prospects when his velocity jumped to the upper-90s.  He also has a nasty slider, but command and shoulder problems have left him mired in AA, where he’s struggling this year.

Edison Lantigua, OF (DR, $275K):  One of the Pirates’ top signings in 2013, Lantigua never made it to full season ball with them.  After they released him, he signed with the Orioles and he’s currently struggling in low A.

Yunior Montero, RHP (DR, $185K):  Montero is interesting because of the difficulties he had in getting cleared to play.  The Pirates originally signed him for $45,000, but the contract was voided when his ID and age couldn’t be proven, although there was never any evidence of fraud.  He added velocity afterward and the Pirates had to outbid other teams for him, but the ID issues kept him out for two more years.  He finally became a pro for the 2014 season and looked intriguing due to a high K rate, but the Pirates released him after the 2017 season.

Jeremias Portorreal, OF (DR, $375K):  The Pirates’ second biggest signing in 2013, Portorreal fit a pattern of hitters signed for (by the Pirates’ penurious standards) big bonuses who were overmatched from the start.  Portorreal struggled for five years and never got past Bristol before being released.

Edgar Santana, RHP (DR):  Santana was nearly 22 when he signed, as his father wanted him to finish college.  He shot through the Pirates’ system and had a strong year in relief for them in 2018.  He’s out this year due to Tommy John surgery.  He’s the only international pitcher signed by the Pirates during Neal Huntington’s 12-year tenure who’s gotten established in the majors.

Raul Siri, IF (DR):  Siri had a big season at the plate in the DSL in 2014, but never developed after that.  He’s gotten limited playing time as a fill-in at the class A level this year.

Adrian Valerio, IF (DR, $400K):  The Pirates’ top signing from this period, Valerio has the glove but hasn’t developed with the bat.  He got some brief time in AA this year due to injuries, but he’s back with Bradenton for his second season and appears to be an organizational guy now.

Gabriel Brito, C (DR, $200K):  The Pirates have had a great deal of trouble finding catchers on the international market.  Brito got (again, by their cheapo standards) a relatively large bonus, but like most of the international catchers they signed in recent years, they weren’t happy with his defense.  He also didn’t develop with the bat.  Brito is still officially with the team, but he left training camp this spring on his own and seems unlikely to return.

Yondry Contreras, OF (DR, $400):  Contreras was the Pirates’ only “big” signing in this period and, like nearly all the hitters they signed on the international scene from roughly 2010-14, he was overmatched at the plate right from the start.  He lasted four years and never got past Bristol.

Yerry De Los Santos, RHP (DR, $100K):  De Los Santos essentially missed the 2016-18 seasons due to Tommy John surgery and other issues, so he came into this season with very little experience.  But he came in throwing in the mid-90s and generating a lot of swings and misses, so the Pirates moved him all the way up to Greensboro, where he’s been the primary closer.  He’s holding opponents to a .170 average and fanning 13.2 per nine innings.

Raul Hernandez, C (VZ):  Hernandez is a solid defensive catcher who quickly got established as an organizational player.  He’s currently at Bradenton.

Domingo Robles, LHP (DR, $175K):  Robles is a finesse lefty who’s moved steadily up through the system.  After he signed, there were reports (from elsewhere) of a velocity spike, but he’s generally topped out at about 90.  (This has been something of a pattern in the past, which is why I’m skeptical of velocity reports on international pitchers unless the information comes from John Dreker.)  Robles moved up to Altoona this year and has a 4.74 ERA with a low K rate.

Roger Santana, LHP (DR, $100K):  Santana had a little better velocity than Robles and a potentially good change, but he didn’t get good results at Bristol last year and the Pirates released him after he was injured this spring.

Larry Alcime, Jr., OF (Bahamas, $350K):  Alcime was another of the hitters the Pirates signed in the early- to mid-2010s who just couldn’t hit at all.  Despite the bonus, they released him after barely over two years and just four games in the GCL.  Fortunately, Alcime seems to have been the tail end of the puzzling trend with hitters.

Sherten Apostel, IF (Curacao, $200K):  Apostel broke out in his second DSL season, then got traded for a seldom-healthy reliever.  He put up an .802 OPS over the first three months this year in low A for Texas, and is now doing decently in high A.

Samuel Inoa, C (DR, $240K):  Inoa looked like a good prospect after a big second DSL season, but he’s struggled with hand and hamstring injuries, and concussion problems.  The Pirates also weren’t enthralled with his defense behind the plate.  He appears to be limited to first base and DH now, and has an OPS of .781 at Bristol.

Lolo Sanchez, OF (DR, $450K):  With plus-plus speed and very good defensive ability, Sanchez profiles as a leadoff hitter and center fielder, if he can hit.  He struggled last year as one of the youngest players in the South Atlantic League, then went back this year and had a big first half.  He’s struggled badly in the past month and a half at Bradenton, with a .486 OPS.  He didn’t turn 20 until after the season started, so he’s still a good age for the level.

Rodolfo Castro, 2B (DR, $150K):  Castro (pictured above) offers good power from both sides of the plate; he has 19 home runs so far this year.  Like Sanchez, he struggled last year in low A, then hit very well there this year.  Also like Sanchez, he struggled after moving up to Bradenton six weeks ago, but unlike Sanchez he’s shown signs of coming around lately.  Swinging and missing has remained an issue.  Castro didn’t turn 20 until less than three months ago.  Originally a shortstop, Castro is erratic on defense, so he’s probably not playing second solely because of the other players he’s been teamed with.  He’s on my good guy list because he gave my nephew’s kid a baseball before a game in Bradenton.

Altoona has 19 games left. They trail by 14 in the division. They can be eliminated as early as tomorrow.

Bradenton has 16 games left. They trail by ten games in the division. They can be eliminated as early as tomorrow.

Greensboro has 19 games left. They trail by six in the division and they are 1.5 games back for the second best record, which could possibly get them a playoff spot.

Bristol has 14 games left. They trail by two in the division and they’re one out of the second playoff spot.

GCL Pirates have 15 games left. They trail by 14.5 in the division. They can be eliminated as early as tomorrow.

Today’s Starter and Notes: The Pittsburgh Pirates lost 7-4 to the Los Angeles Angels on Wednesday night. The Pirates have off today. They now travel home for a weekend series against the Chicago Cubs. They will send out Joe Musgrove for the series opener. The Cubs haven’t announced their starter yet.

The minor league schedule includes the first start for Noe Toribio since he was named as our Player of the Week. He tossed six no-hit innings in his last outing. Altoona will be sending out Cody Bolton, who has flipped between good and bad outings in his last six games. His good outings have produced just one run allowed over 17 innings. Bradenton has a doubleheader today. Bolton was pushed back a day when Cam Vieaux rejoined the rotation.

Luis Ortiz goes for Bristol. He allowed three runs over six innings in his last start. In his three previous outings combined, he gave up two earned runs. Brad Case starts a noon time game for Bradenton. He has an odd stat line of allowing seven hits in each of his last five starts. Alex McRae goes for Indianapolis. He gave up one run over five innings in his last start, despite ten base runners. McRae has a 5.21 ERA in nine home starts. Morgantown is sending out Michael Burrows for his ninth start. He has been unable to get through five innings in each of his last four starts, but has given up just six earned runs during that span. The DSL Pirates2 have a doubleheader today.

From Indianapolis on Tuesday, Jason Martin makes his only hit of the night count when he drives in three runs with a bases loaded triple

Great defensive play by Will Craig

The boy will fill the Gatorade cooler, walk your dog and paint your back porch.

Six former Pittsburgh Pirates players born on this date, plus two trades of note. On this date in 1969, the Pirates traded pitcher Jim Bunning to the Dodgers for two minor league players and cash. The Hall of Fame pitcher was near the end of his career and on the downside, so the Pirates didn’t miss him much. That was good because they all got was six games from the two players that they got in return.

On this date in 1910, the Pirates purchased the contract of Max Carey from his minor league team. That was the start of his 17-year career with the team. Carey played 2,178 games for Pittsburgh, collecting 2,416 hits and 918 walks, with 1,414 runs scored and 688 stolen bases. He’s fourth in team history in runs, hits and games, second in walks and first all-time in steals.

Oliver Perez, pitcher from 2003 until 2006. He was involved in two big trades that both worked out well, coming over with Jason Bay and leaving for Xavier Nady. He had 239 strikeouts during the 2004 season.

Bernie Walter, pitcher for the Pirates on August 16, 1930. He was actually the team’s batting practice pitcher, spending the entire 1930 season with the Pirates, but he only pitched one inning. He never even played minor league ball, so that one inning was his entire career.

Red Peery, pitcher for Pirates on September 22, 1927. During the end of the 1927 season, shortly before the Pirates went on to their fourth World Series, Peery pitched at the end of a blowout loss during a doubleheader. That would be his only appearance for the Pirates.

Lew Carr, shortstop for the 1901 Pirates for two weeks. Honus Wagner was a third baseman at that time, as he didn’t play shortstop regularly when he first joined the Pirates. Carr played nine games and held his own at the plate with a .701 OPS, but regular shortstop Bones Ely took his job back and Carr was released.