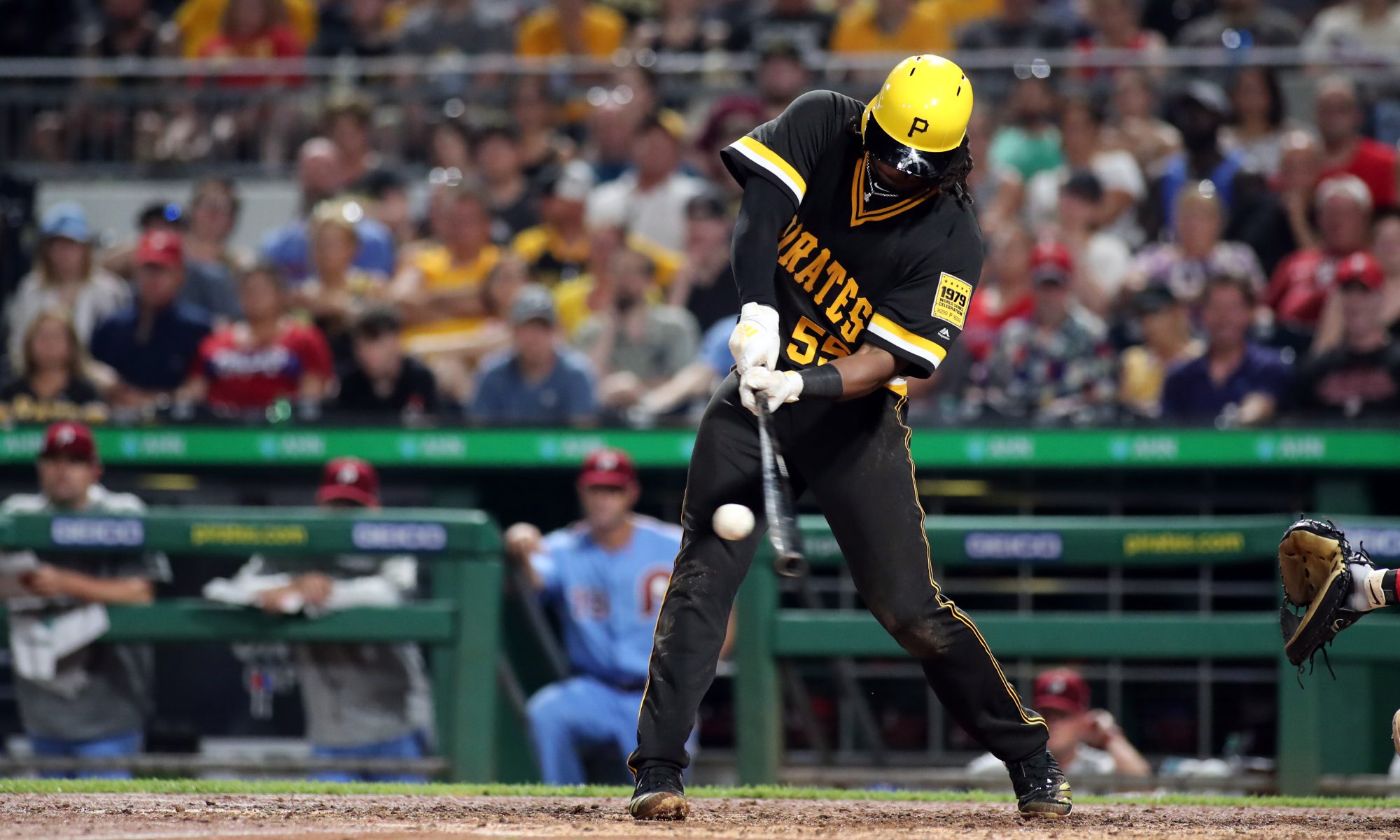 Josh Bell has a chance to put his name high up in the record books for the Pittsburgh Pirates. Early in the season he was on a record-setting pace for doubles. That part of his game has really cooled off, though he still leads the National League with 36 doubles. He’s been steady with the home runs all season, which now has him knocking on the door of some elite company.

The Pirates played a long time in spacious Forbes Field, which was designed specifically by owner Barney Dreyfuss in 1909 to prevent what he called cheap home runs. The big outfield led to a lot of doubles and triples, but it kept home run numbers down. So if someone now has a really good season in the home run department, they’re not competing with a lot of ghosts from the past who had big seasons. It took a young power hitter named Ralph Kiner for the Pirates to really embrace the home run, which led to them moving in the left field fence to normal measurements. Before Kiner, the team home run record stood at 23, which was put up by outfielder Johnny Rizzo as a rookie in 1938.

Right now, Josh Bell’s 31 home runs this season places him 25th in team history. He doesn’t have a chance at the top spot, but with 42 games left in the season, he has a chance to move up the list. What’s most impressive is that just ten players have hit more than 31 homers in a season for the Pirates, so he already has impressive company. Here’s the list, with the amount of times they hit 32+ homers, along with their season high.

The real chance at history for Bell this season is in the extra-base hits category. He’s lower on that list than the home run list right now, but he’s actually closer to the top spot. With 70 extra-base hits in 120 games, he’s on pace for the team record. That was set back in 1973 by Willie Stargell when he led the league with 43 doubles and 44 homers. He added in three triples for good measurement, giving him 90 XBH on the season. It broke the record of 87 set in 1925 by Hall of Famer Kiki Cuyler.

Bell is tied for 31st place on that list right now, but barring an epic slump, he is going to finish near the top. That’s because after Cuyler in second place with 87, third place is a tie at 82 between Jason Bay and Adam Comorosky, who had a one-of-a-kind season in 1930 to get to that spot. Every XBH by Bell from now until #83 would move him up at least one spot on the team’s all-time list. In fact, he will move up five spots just with his next one.

If you want to look at the bigger picture, Bell needs six XBH to get into the top 500 single season lists for all of baseball history. Top 500 doesn’t sound too impressive, but if he hits just one more (77 XBH), that moves him all the way up to 388th on that list. Bell is definitely within reach of the team record though, and 90+ XBH in a season has only been done 68 times in baseball history. His pursuit of the team record gives you something to follow over the final 6+ weeks of the season.

Altoona has 18 games left. They trail by 15 in the division. They can be eliminated as early as tomorrow. Their elimination number is one now, but they can’t officially be eliminated until the first half champions also get eliminated.

Bradenton has 16 games left. They trail by nine games in the division. They can be eliminated as early as tomorrow.

Greensboro has 18 games left. They trail by 5.5 in the division and they are 2.5 games back for the second best record, which could possibly get them a playoff spot.

Morgantown has 17 games left. They trail by 1.5 games in the division and a 1/2 game in the wild card spot.

Bristol has 13 games left. They trail by two in the division and they’re one out of the second playoff spot.

GCL Pirates have 14 games left. They trail by 14.5 in the division. They will be eliminated from the playoffs if they lose today.

Today’s Starter and Notes: The Pittsburgh Pirates had off yesterday. They are now home for a weekend series against the Chicago Cubs, with Sunday’s game taking place in Williamsport. They will send out Joe Musgrove for the series opener. He allowed three runs over 5.1 innings against the St Louis Cardinals in his last start. That followed eight runs over 3.1 innings against the New York Mets. Musgrove has faced the Cubs twice this year, throwing a total of 9.2 innings without an earned run. The Cubs will counter with veteran right-hander Kyle Hendricks, who has a 3.48 ERA in 129.1 innings, with 114 strikeouts and a 1.16 WHIP. He is coming off of an outing against the Cincinnati Reds in which he gave up seven earned runs on 12 hits in 2.2 innings. He allowed a total of six runs in his previous five starts combined. Hendricks has faced the Pirates once this season, giving up two runs over three innings back on July 2nd.

The minor league schedule includes a doubleheader for Indianapolis. Dario Agrazal will get the game one start, followed by the Indianapolis debut for Cody Ponce. Agrazal has allowed 21 runs in his last 21.2 innings with the Indians. This will be his second start since returning from the Pirates. Ponce allowed four runs over six innings with Altoona before being promoted earlier this week. Tahnaj Thomas is making his tenth start for Bristol. He has allowed three runs total in his last three starts, with 20 strikeouts in 15 innings. He ranks eighth in the league in strikeouts, despite ranking 37th in innings pitched.

Bradenton will send out Conner Loeprich, who has mainly pitched out of the bullpen, but he started his last two games and gave up seven runs over eight innings. Steven Jennings gets the start for Greensboro. After posting a 2.08 ERA in June, Jennings had a 5.20 ERA in July and a 7.20 ERA in August. Morgantown sends out Austin Roberts for his third start and 13th overall appearance. He has a 6.14 ERA in the two starts and a 2.70 ERA in the relief appearances. Altoona doesn’t have a starter listed.

From Indianapolis on Wednesday, Brandon Waddell finally had a strong start in Triple-A, with one run over six innings. Here are some strikeout pitches

.@BWaddell20 carved up today's opponent with a half-dozen strikeouts and a quality start. 🙌@Toyota | #RollTribe pic.twitter.com/IoVw8r3wFc

Christian Kelley goes the opposite way for a two-run double

As he tries to make it back to the majors, Trayvon Robinson has put together a strong season in Indianapolis. Here’s his seventh home run.

Ten former Pittsburgh Pirates players born on this date, including a player included in the worst trade the Pirates ever made.

Rick Reed, pitcher from 1988 until 1991. He eventually became a good Major League pitcher, but it was well after the Pirates released him in 1992. Reed pitched just 31 games for the Pirates over his four seasons.

Al Holland, pitcher for the Pirates in 1977 and 1985. He was acquired in exchange for Kent Tekulve in 1985. He was dealt away later in the season as part of a six-player trade with the Angels.

Curt Roberts, second baseman in 1954-56. First African-American player for the Pirates. Spent time in the Negro Leagues before playing in the minors. A few players born on this date met tragic endings at an early age. Roberts was hit by a car at age 40, while he was changing a tire.

Gene Woodling, 1947 outfielder. Spent 17 seasons in the majors, while also serving two years in the military during WWII.

Tiny Bonham, pitcher for the 1947-49 Pirates. He made the AL All-Star team twice while with the Yankees and won 103 career games. During the 1949 season, he went to the hospital for an appendectomy and found out he had intestinal cancer, passing away two weeks later at the age of 36.

Bill Keen, first baseman for the 1911 Pirates. Got injured in his first game and was used strictly as a pinch-hitter after that. He is why I encourage people to read the link above for more information. Very interesting story about his short career, confusion with his name, and his minor league stats being attributed to someone else.

Gene Steere, shortstop for the 1894 Pirates (or Braves if you want to be correct) Hit .205 in ten games and committed five errors.

Hank Robinson, pitcher for the 1911-13 Pirates. Won 28 minor league games in 1911 before he joined the Pirates. He had a 2.26 ERA in 1912 and 2.38 in 1913, before he was dealt to the Cardinals in an inexcusable trade that also saw Chief Wilson (the single-season triples leader and 1909 right fielder) and Dots Miller go to St Louis for Ed Konetchy, who Pirates’ owner Barney Dreyfuss had a man-crush on. I’m not just saying that because I’m still mad about them dumping Miller. Dreyfuss tried often to trade for Konetchy, to the point he finally gave up way too much to get him. His reward for the trade? Konetchy played poorly in 1914, then jumped to the Federal League after one season.