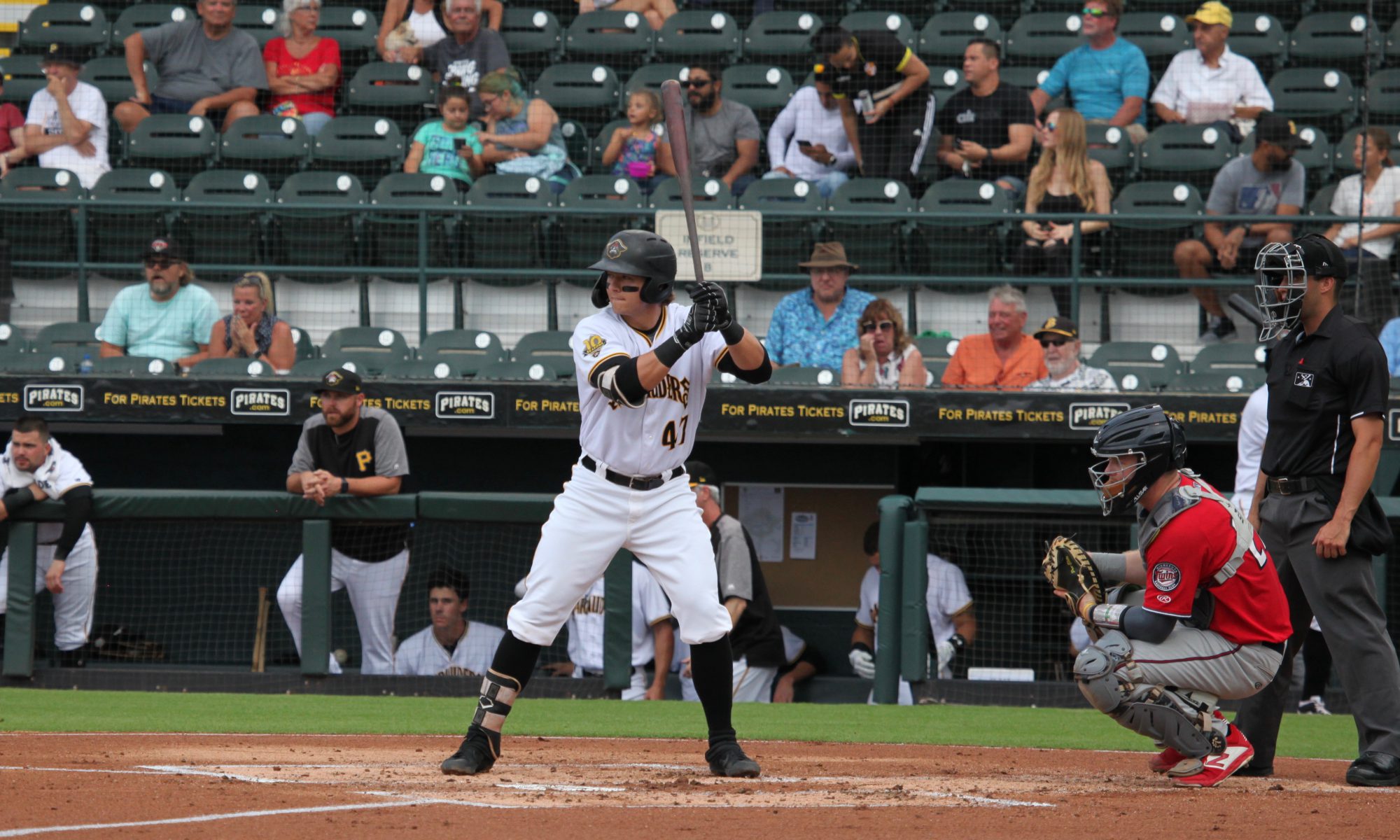 Over at Baseball America, I had the assignment of naming the Minor League Player of the Year for the Pirates. We feature a Player of the Year and Pitcher of the Year at Pirates Prospects, coming after all of the minor league teams have finished their season. At BA, every player was in consideration for the one spot.

As you can see by clicking the link above, my pick was Mason Martin. The season isn’t over, but Martin has already had a big year at the plate, combining for 34 home runs between Greensboro and Bradenton, with a combined .909 OPS. As with any prospect, there are things to work on going forward — in Martin’s case it’s raising the batting average and cutting down on strikeouts, which I detailed a bit in the story — but the progress shown by Martin this year, especially in the power department, has been impressive.

The jump to Double-A will be a big one for Martin, really testing his work on reducing strikeouts and maintaining a good average. I could see him being a three-outcomes type hitter in the majors, with power fueling his game. He’s got some time to work on his development to get to that point, as the Pirates still have Josh Bell under control for a few more years.

Martin was the clear winner for me on the hitting side this year. I mentioned James Marvel and Cody Bolton in the article as candidates on the pitching side. If playing time wasn’t an issue, I’d also highlight Oneil Cruz on the hitting side.

All four of these guys should start in Double-A or higher next year. Marvel could even get a shot at the majors this season, and should be a depth option at least to start next year. Bolton could contend for the rotation in 2021, if not earlier, while Martin and Cruz could push for starting roles around 2021 or 2022.

If the Pirates are competitive around those years, then these are some of the prospects who can help give them a boost. Or, if they go for a rebuild and get to a point where they can start contending around 2021-2022, these are some of the guys they can build around, while adding some higher upside guys like Quinn Priester and Tahnaj Thomas in the following years.

Of course, that all depends on the progress from these guys going forward. In Martin’s case, he’ll get a big test with the jump to Altoona next year, at which point we might start to see if he can fit in as a future replacement for Bell in Pittsburgh.

Greensboro has 8 games left. They trail by seven in the division and they are 4 1/2 games back for the second best record, which could possibly get them a playoff spot.

Morgantown has 9 games left. They trail by a 1/2 game in the division and two games in the wild card.

Bristol has 3 games left. They are a 1/2 game ahead in first place. Two teams make the playoffs in each division.

Today’s Starter and Notes: The Pittsburgh Pirates won 9-8 over the Cincinnati Reds on Sunday afternoon. The Pirates now travel to Philadelphia for three games against the Phillies. They will send out Joe Musgrove in the series opener. He gave up five runs over five innings against the Washington Nationals in his last start. Musgrove faced the Phillies on July 20th and he gave up one unearned run over six innings, allowing just two hits. He has a 4.02 ERA on the road, compared to 5.35 at home. The Phillies will counter with veteran lefty Jason Vargas, who has a 3.99 ERA in 117.1 innings, with 92 strikeouts and a 1.27 WHIP. He has made his last two starts in Philadelphia, allowing two runs over six innings to the Chicago Cubs, followed by two runs over 5.2 innings against the San Diego Padres. Vargas faced the Pirates on July 28th while he was with the New York Mets, and he surrendered three runs in 5.2 innings.

The minor league schedule includes the third start for Cody Ponce in Indianapolis. He gave up six runs over four innings in the first game, followed by five shutout innings in the second start. Ponce has not walked a batter in Triple-A, while picking up 13 strikeouts. Bristol is sending out 19-year-old Santiago Florez, who is coming off of his best start of the season. Florez tossed six shutout frames six days ago, allowing four hits, with no walks and seven strikeouts.

Morgantown is sending out JC Flowers for his seventh start. This year’s fourth round pick went 3.1 innings in his last start, allowing eight hits and five runs, which are both highs for him. Altoona is sending out Domingo Robles, who gave up one run over seven innings in his last start, while tying his career high with nine strikeouts. His shortest outing of the year came back on July 2nd against today’s opponent (2.1 IP versus Akron). Brad Case goes for Bradenton. He has allowed four runs in each of his last three starts. Greensboro doesn’t have a starter listed, but it should be Will Kobos, who tossed five no-hit innings in his last start, while striking out a career high eight batters. The DSL regular season is over. The Pirates2 received a first round bye, so their playoffs will start later this week.

From Indianapolis on Saturday, Christian Kelley hits a two-run double

.@BWaddell20 likes his base hits like we prefer our ice cream: soft serve. 🍦@Toyota | #RollTribe pic.twitter.com/j4uPmXkGBD

Three former Pittsburgh Pirates players born on this date, and one of them is a two-time former player, plus a trade of note. Sixteen years ago today, the Pirates traded Brian Giles to the San Diego Padres for Jason Bay, Oliver Perez and Corey Stewart. While Giles put up huge numbers in Pittsburgh, the Pirates made out great in this deal, getting strong production out of Jason Bay in place of Giles. Perez also had one huge season on the mound for the Pirates before his numbers really fell off and he was eventually traded. Stewart never made the major.

Jeff Richardson, 1991 infielder. Played six games for Pirates, filling in for an injured Jeff King. Richardson came to Pirates from the Reds in the Billy Hatcher trade.

Sparky Adams, 1928-29 infielder. Was part of the return in the unpopular, but necessary Kiki Cuyler trade. Pirates sold him to the Cardinals after two seasons.

Eric Fryer, 2011-12 catcher. Pirates acquired him from Yankees for Eric Hinske. Played 16 games over two seasons for Pirates during his first stint with the team. Played for Twins for three seasons, before signing with the Cardinals as a free agent during the 2016 off-season. Pirates picked him up off waivers in July, 2016 and he played 36 games for them in his second stint.