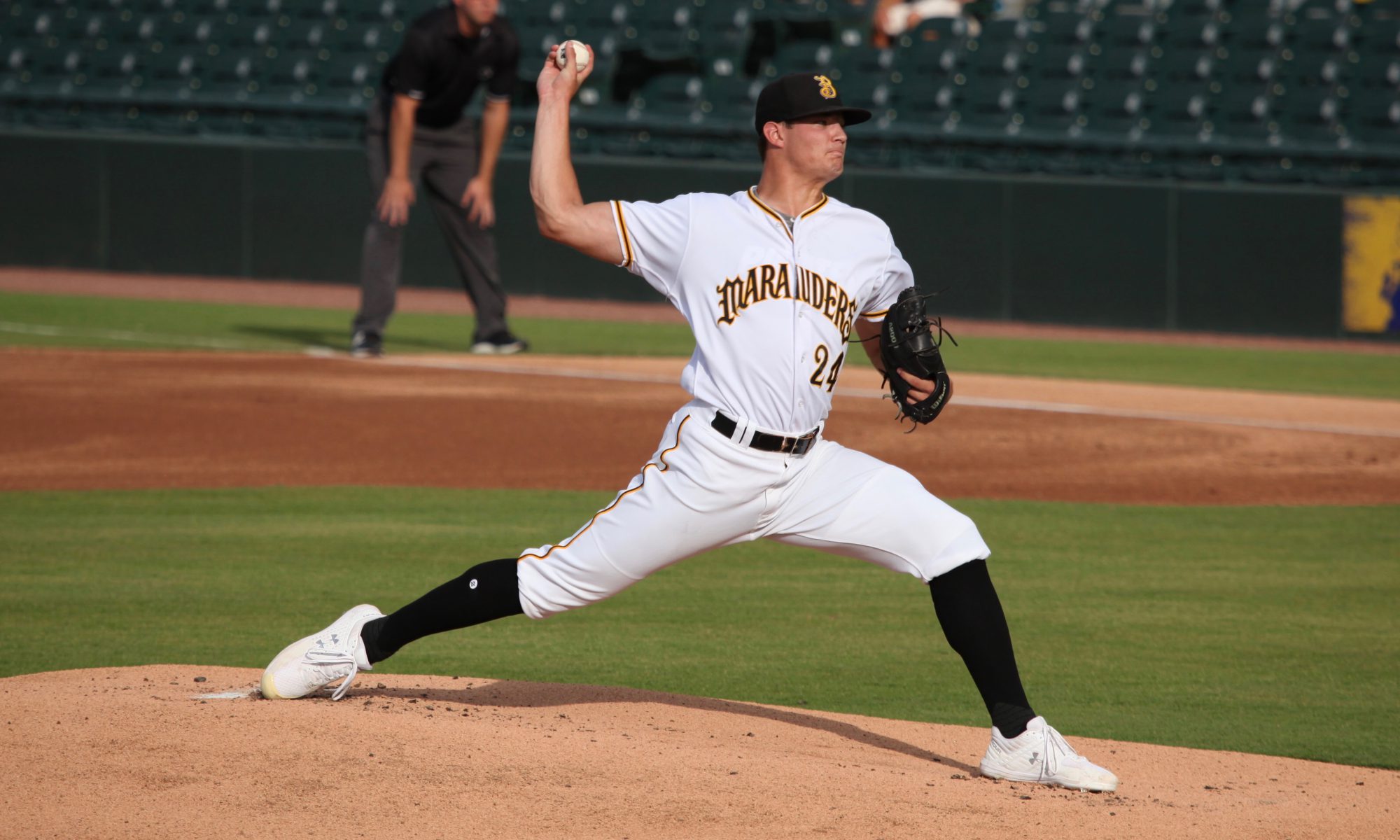 Indianapolis lost 3-2 to Norfolk in the first game of a doubleheader. Cam Vieaux got the start and went five shutout innings on five hits. Despite a somewhat short outing with no damage, plus just one walk and one strikeout, Vieaux needed 87 pitches to get through his outing. This is the first time he has thrown shutout ball in 13 Triple-A starts. Dovydas Neverauskas took over in the sixth and ran into trouble right away, giving up three runs in the inning.

The Indians scored two runs in the first inning and then that was it for the game. Jake Elmore crossed the plate on a wild pitch, then Will Craig scored on a Kevin Kramer single. Craig had two hits. Cole Tucker had a single and a walk. Jason Martin hit his 20th double.

Indianapolis won game two by a 3-2 score. Eduardo Vera, who recently moved to the bullpen, got a spot start and allowed two runs over four innings. Jake Brentz got the win with two scoreless frames and Montana DuRapau got the save.

Jason Martin and Ke’Bryan Hayes each had two hits and an RBI. Martin picked up his 21st double. Hayes added a run scored. Cole Tucker hit his 11th double, walked and scored a run.

Altoona won 2-0 over Richmond. Cody Bolton got the start and it was a strong one. He went five shutout innings, allowing four hits and two walks, while striking out three batters. He needed just 64 pitches to get through his night. Clay Holmes followed Bolton, making his second rehab appearance. Holmes tossed two shutout innings. He retired the side in the sixth on ten pitches, then allowed a lead-off triple in the seventh. That was followed by three straight strikeouts to end his night. Angel German tossed a scoreless frame and Blake Cederlind recorded his first save working around an error in the ninth.

The Curve got their second run on an RBI double from pitcher/pinch-hitter Beau Sulser. He was one of two pinch-hitters for the pitcher’s spot (Bralin Jackson was the other) and they both hit doubles. Brett Pope had two hits and scored on Sulser’s double. Oneil Cruz had an RBI single and he drew a walk.

Bradenton won 4-1 over Dunedin. Aaron Shortridge had one of the top outings of the season, going eight shutout innings on two hits and one walk, with four strikeouts. He threw 62 of 90 pitches for strikes. He now has a 3.26 ERA through 118.2 innings. Hunter Stratton allowed a solo homer in the ninth for the lone run.

Rodolfo Castro had the big hit of the game, driving in two runs with a second inning single. Castro would come around to score on a wild pitch. Raul Hernandez added an insurance run with an RBI single in the third inning. He had three hits and scored a run. Deon Stafford had a single, two walks and a run scored. Daniel Amaral reached on his tenth double, a walk and a hit-by-pitch.

Greensboro lost 7-2 to Asheville. Alex Manasa had a strong start, giving up one run over five innings on three hits, no walks and seven strikeouts. He threw 45 of 66 pitches for strikes and posted a 6:2 GO/AO ratio. Manasa reached 100 strikeouts with his last punch out of the night. Cristofer Melendez followed with two runs (one earned) over two innings. Alfredo Reyes made his third relief appearance and he allowed a solo homer. He has given up four runs in 2.2 innings. Michael LoPresti took over in the ninth and gave up three runs, though they were all unearned.

Greensboro got on the board first in this game, putting up two runs in the third inning on a sacrifice fly from Luke Mangieri, then an RBI double from Michael Gretler. Ji-Hwan Bae had a big game, going 2-for-3 with two walks and two stolen bases, giving him 24 steals on the season. Justin Harrer had two hits and a walk. Fabricio Macias had his 15th steal.

Matt Gorski hit a solo home run in the second inning, his third pro home run. He also added another RBI on a sacrifice fly. Jared Triolo had a single, triple, walk, two runs scored and an RBI. The triple was his third of the season. Blake Sabol hit a single and his fourth double. He scored a run and picked up an RBI. Brett Kinneman drove in two runs with his sixth double. Fernando Villegas went 1-for-3 with his first RBI since being promoted to Morgantown.

In game two, Jesus Valles continued his improved pitching by allowing one run over 5.1 innings, surrendering three hits, with one walk and six strikeouts. After posting a 4.96 ERA over his first seven starts, he has now given up one run over his last 16.1 innings, lowering him to a 3.49 ERA. The only run off of Valles scored after he left. Oliver Garcia took over and let in an inherited run. Garcia stayed on for the seventh and picked up the save in the 2-1 win.

The offense was fairly quiet in this game, doing just enough to win. They had three hits total, but singles by Cory Wood and Kyle Wilkie each brought in a run. The Black Bears had nine total runners in the game and Wilkie with a single and a walk was the only player to reach twice.

Bristol lost the first game of a doubleheader 4-3 to Kingsport. Luis Ortiz got the start and went six innings, allowing three runs on five hits and three walks, with three strikeouts. He has a 3.08 ERA and a 1.24 WHIP in his first 38 innings. CJ Dandeneau took the loss with a run in the top of the seventh.

Bristol won game two by a 10-2 score. Yoelvis Reyes got the spot start and put together a strong performance. In five innings, he allowed an unearned run on four hits and no walks, while picking up six strikeouts. He was pound the zone, with 42 of 57 pitches going for strikes. Lizardy Dicent allowed a run in the sixth and Enrique Santana pitched a clean seventh to close things out.

The GCL Pirates had off on Thursday.

The DSL Pirates1 lost 2-1 to the Dodgers Shoemaker. Andy Maldonado started and went three innings, giving up an unearned run. He was limited due to some control issues, including three walks. Eddison Polonia took the loss with one run over three innings. He struck out three batters. Luis Peralta tossed two scoreless innings, striking out three batters.

The offense put together three singles, four walks and four extra-base hits, along with a hit batter and two stolen bases. Despite all of that, they managed just one run. The big issue was going 1-for-12 with runners in scoring position. Juan Jerez hit his 12th double and drove in the lone run. Francisco Quintero hit his first triple and drew two walks. Luis Tello had a single, walk and a stolen base. Luis Tejeda hit his seventh double. Eliazer Montero stole his 11th base.

The DSL Pirates2 won 8-2 over Colorado. Adrian Mendez got the start and he allowed two runs on five hits and a walk, with three strikeouts in five innings. Through 12 starts, he has a 6.23 ERA in 43.1 innings. Johan Montero followed with four shutout innings on three hits, one walk and four strikeouts. The Pirates now have a 47-11 record.