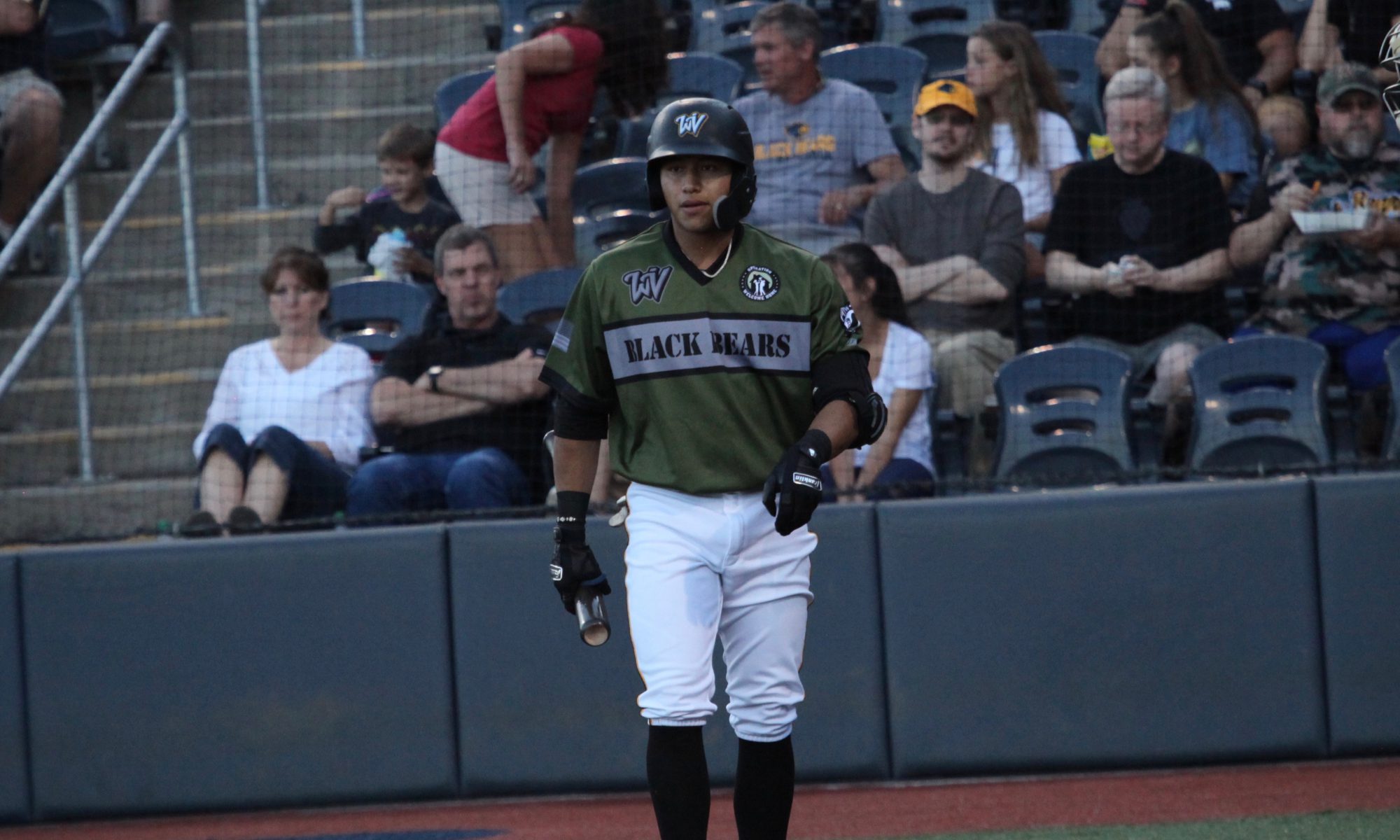 Indianapolis lost 8-4 to Lehigh Valley in the first game of a doubleheader. Dario Agrazal started and he went five innings, giving up four runs on seven hits, with one walk and seven strikeouts. He has given up 25 earned runs in his last 26.2 innings. Montana DuRapau threw a scoreless sixth. Dovydas Neverauskas sent it to extra inning with shutout ball in the seventh, but he allowed four runs (three earned) in the eighth inning.

Will Craig had a solid day at the plate by driving in two runs with his 21st double, while also drawing two walks. Trayvon Robinson doubled in a run and also walked. Darnell Sweeney returned to Indianapolis today with a walk and an RBI. Eric Wood had two hits. Jason Martin singled, walked and stole his eighth base.

Game two was the Triple-A debut of Cody Ponce and it did not go well. In four innings, he allowed six runs (four earned) on seven hits, with no walks and five strikeouts. Ponce served up back-to-back-to-back homers in the third inning. Rookie Davis followed with one run over the final two innings. Indianapolis lost 7-2.

Jake Elmore got the scoring started for the Indians with his 30th double, which scored Steven Baron. Mitchell Tolman then picked up his first Triple-A RBI with a single that scored Elmore. No one had more than one hit, but Elmore, Tolman, Trayvon Robinson and Eric Wood each had a hit and a walk.

Altoona lost 6-2 to Bowie. Domingo Robles got the start and he allowed four runs on 11 hits and a walk in six innings. He had four strikeouts and threw 60 of 94 pitches for strikes. Tom Koehler followed with his first Double-A appearance during his return to action after missing all of 2018 and the first four months of this year. This game didn’t go well, with two runs scoring on two hits and a walk, while recording his only out on a strikeout. Koehler gave up a home run. He threw 17 pitches total, nine for strikes. Angel German recorded the final eight outs, with one runner reaching on an error. He struck out three batters.

Altoona got their runs on an RBI double by Oneil Cruz (his third double) in the fourth inning and a ninth inning error brought in the second run. Jared Oliva, who went 2-for-5 in the game, had a chance to tie the score in the bottom of the ninth, but he lined out to end the game. Besides the double, Cruz also walked twice. Bligh Madris and Jerrick Suiter each had two hits. Brett Pope drew two walks.

Bradenton lost 4-2 to Lakeland. Conner Loeprich got the start for Bradenton and he went six innings, giving up four runs on nine hits, with no walks and three strikeouts. This is the second time that he has pitched six innings in his career. John O’Reilly followed with two shutout innings, picking up four strikeouts. He has allowed one earned run in 14.1 innings with Bradenton.

Greensboro picked up a walk-off 4-3 victory over Augusta. Jack Herman started the scoring in the first inning with his eighth double. Connor Kaiser added an RBI double in the fifth inning, his 12th double. The Grasshoppers added a run on a wild pitch in the seventh and a grounder by Kaiser in the ninth scored Ji-Hwan Bae with the walk-off run.

Kyle Mottice picked up the Kyle Mottice trifecta again with a single, walk and HBP. He stole two bases to give him 18 steals and he scored three runs. Luke Mangieri had two hits. Grant Koch walked twice.

Steven Jennings went five innings, giving up three unearned runs on two hits and two walks, with five strikeouts. It was Jennings’ own error that caused the three runs to be unearned. After a third inning walk, he threw away a grounder, then served up a home run. Cristofer Melendez followed with three shutout innings on one walk and four strikeouts. He needed just 33 pitches to get through his night. Yerry De Los Santos got the win with a scoreless ninth. He’s in a stretch of 13.1 scoreless innings, with 19 strikeouts.

Morgantown won 9-3 over Batavia. Eighth round pick Austin Roberts had an outstanding start, going five innings with one run (solo homer) on two hits, with no walks and seven strikeouts. He threw 44 of 57 pitches for strikes (13 balls and 15 outs!) and posted a 5:0 GO/AO ratio. Bear Bellomy served as the piggyback starter, coming out of the bullpen to throw the final four innings. He gave up two runs on four hits and two walks, with two strikeouts.

Fernando Villegas, who was our Player of the Week two weeks ago before joining Morgantown, put up his best game since the promotion. He hit two doubles, walked twice and drove in five runs. Kyle Wilkie had a big game too, collecting four hits, scoring twice and picking up an RBI. He also drew a walk. Brett Kinneman and Matt Frazier each had two hits, an RBI and a run scored. Fraizer also added a walk and a stolen base. Jared Triolo hit his 17th double, though he went 1-for-6 in the game. Everyone in the lineup collected each one hit.

Bristol won 8-3 over Princeton. Tahnaj Thomas got the start and battled with control, which limited him to three innings. He allowed one run on two hits and four walks, while striking out five batters. He threw 38 of 69 pitches for strikes. Thomas now has a 3.62 ERA in 37.1 innings, with 51 strikeouts. Luis Arrieta followed with two shutout innings. Lizardy Dicent surrendered two runs in the sixth. Ryan Troutman was out next and he had two strong innings, with no runs and five strikeouts. Enrique Santana came on in the ninth to close things out and he retired the side in order.

Daniel Rivero had a single and his fourth double, as well as an RBI ground out, driving in a total of four runs. He also scored a run and stole his fourth base. Jake Wright had two singles and scored two runs. Josh Bissonette drove in two runs with his tenth double. Chase Murray hit his second home run. Matt Morrow had a single, walk and two runs scored.

The GCL Pirates were rained out today. They would have been eliminated from the playoff picture with a loss to the first place Orioles, so their ultra slim playoff hopes are alive for at least one more day.

The DSL Pirates1 lost 3-2 to the Cubs1. Sergio Campana went 3-for-4 with a run scored and his 21st stolen base. Juan Jerez went 2-for-4 with an RBI and his sixth stolen base. Eudys Carrasco had a single and a walk. Starter Braham Rosario allowed seven hits, but put together a solid outing with one earned runs over five frames. He had no walks and two strikeouts. Yeison Santos took the loss with one unearned run in four innings. He gave up one hit, one walk and struck out four batters.

The DSL Pirates2 lost 8-4 to the Giants. Starter Carlos Jimenez allowed two runs over three innings. With one start remaining this season, he has a 2.83 ERA, with 43 strikeouts in 35 innings. Miguel Diaz followed with four runs in 1.1 innings, with three walks and three hits allowed. Jose Amaya followed with two runs (one earned) on four walks and a hit in 2.2 innings. Axel Rosario tossed a scoreless eighth.

The Pirates got two hits apiece from Deivis Nadal, Jauri Custodio, Rodolfo Nolasco, Jommer Hernandez and Mario Jerez. Nolasco hit his 12th double and drove in a run. Nadal hit his third triple, walked and scored a run, while also picking up his tenth stolen base.