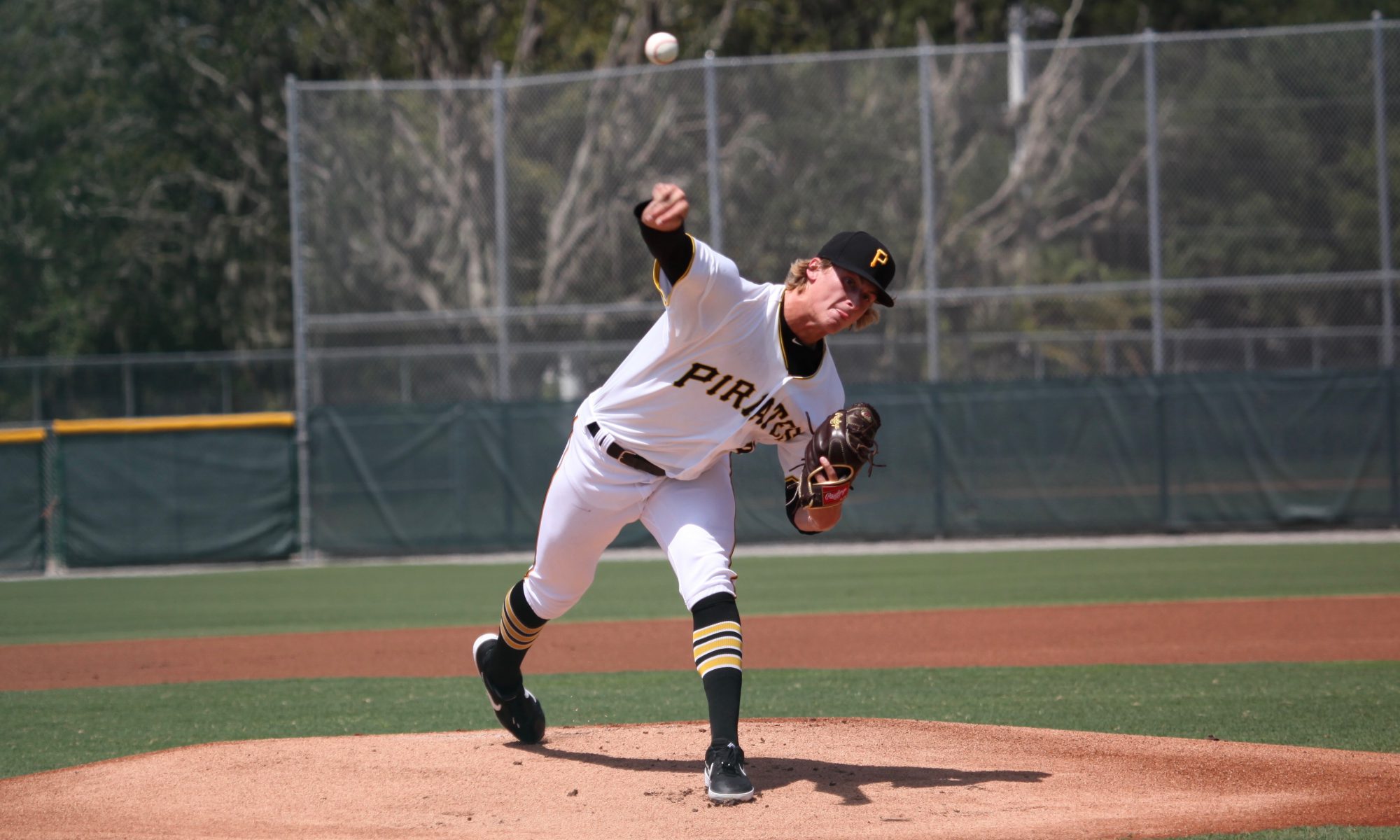 Indianapolis lost 8-1 to Norfolk. James Marvel lowered his ERA to 1.87 in Indianapolis, but he did not have a good night on the mound. He went four innings, giving up just an unearned run. Marvel allowed four hits and issued five walks, which is a new career high. On the bright side, his four strikeouts gives him 34 strikeouts in 33.2 innings in Triple-A. Sean Keselica had an even worse time throwing strikes, walking batters and giving up a hit, while recording just one out. Four of those runners scored. Keselica threw seven of 24 pitches for strikes. Luis Escobar had much better control, though it didn’t help him much. He gave up three runs in 1.2 innings.

Yacksel Rios made his Pirates debut and tossed a scoreless eighth, followed by JB Shuck, who kept them off the board in the ninth.

The Indians had no trouble getting runners on base, and they even had three hits with runners in scoring position, yet it amounted to one run. Jason Martin led the way with three hits. Will Craig hit his 20th double, walked and scored the lone run. Jake Elmore had a single and his 25th double. Cole Tucker and Hunter Owen each had a single and a walk.

Altoona had their game suspended in the bottom of the second with a 0-0 score. They will complete the game tomorrow.

Bradenton had their Monday night game suspended with a 2-1 lead over Charlotte in the bottom of the eighth, which was extra innings in this instance, being the first game of a doubleheader. They completed that game on Tuesday night, with Nick Mears taking over for Osvaldo Bido, who threw 7.1 innings with one unearned run. Mears recorded the final two outs for the win, ending the game in less than ten minutes. Bido threw 55 of 83 pitches for strikes and he posted a 10:5 GO/AO ratio.

Mason Martin led the offense with two singles, a walk and an RBI. Travis Swaggerty had a single and scored two runs. He got on base for the second time when he was the free runner at the start of the eighth inning (he made the final out in the seventh). Daniel Amaral had the other RBI on a sacrifice fly.

The Marauders won game two 8-7 over Charlotte. Conner Loeprich got the start and gave up five runs on 11 hits and a walk over five innings. John O’Reilly gave up two runs (one earned) over three innings. He’s allowed one earned run in 9.1 innings with Bradenton. Shea Murray picked up his fourth save with a scoreless ninth. He has given up one earned run in his last 18 innings, with 32 strikeouts.

Rodolfo Castro hit his fourth home run, drove in a pair and scored twice. Daniel Amaral went 2-for-5 with three RBIs, two stolen bases (12) and a run scored. Adrian Valerio had two hits, a walk and a run scored. Deon Stafford and Lucas Tancas each had two hits. Travis Swaggerty had a bunt single, an RBI ground out and his 19th stolen base. Calvin Mitchell went 0-for-7 in the two games, though he did reach twice in this game on a walk and hit-by-pitch. He also picked up an outfield assist.

Greensboro won 5-2 over Greenville. Colin Selby started and went five innings, giving up two runs (UPDATED: these runs were changed after the game to unearned runs, so his ERA I mentioned below dropped too) on four hits and a walk, with two strikeouts. That gave him a 2.68 ERA through 84 innings this season. Will Gardner loaded the bases in the sixth, but was bailed out by Cam Alldred, who stranded all three runners, then threw a scoreless seventh. Yerry De Los Santos was next and he got the save with two shutout frames. In 40 innings, he has a 1.58 ERA and 59 strikeouts.

Jonah Davis continues to hit, belting his 13th home run and his tenth double. He was the South Atlantic League Player of the Week last week. Ji-Hwan Bae had two walks, a single, a run scored and two stolen bases to give him 22 steals on the season. Michael Gretler had three hits and drove in two runs. He collected his 15th double. Fabricio Macias had a single and a walk.

Morgantown was rained out. They will play a doubleheader on August 31.

Bristol won 7-6 over Danville. Adrian Florencio was tough to hit tonight…when he threw strikeouts. He gave up one earned run over four innings, allowing just two hits, but he walked five batters. He actually threw more strikes than you would imagine with that line, as 46 of his 82 pitches went for strikes. Luis Arrieta gave up two runs (one earned) in his two innings. CJ Dandeneau tossed a scoreless seventh, then Samson Abernathy came on and allowed two runs in the ninth, but hung on for his third save.

Jesus Valdez led the offense with two hits, two runs, two RBIs, a walk and his fourth stolen base. Jean Eusebio had two hits, two runs scored and a walk. He also picked up an outfield assist. Three players collected their first triples of the season, Samuel Inoa, Jake Snider and Francisco Acuna. Inoa is now batting .317, while Acuna had two hits, raising his average to a .318 mark.

The GCL Pirates lost 4-2 to the Twins in game one of a doubleheader. Tom Koehler, who was signed as a minor league free agent in February, pitched his first pro game since September 29, 2017. He gave up two runs in the first inning, facing five batters. Koehler had shoulder surgery and the Pirates knew he would be out most (or possibly all) of this season, so his deal included a 2020 option. After Estalin Ortiz recorded the final out of the first, Quinn Priester took over on the mound. He went 4.2 innings, allowing two runs on five hits, with no walks and four strikeouts. He has a 2.55 ERA and a 1.14 WHIP in 24.2 innings, with 28 strikeouts. Starlyn Reynoso threw shutout ball over the final 1.1 innings.

Deion Walker homered in this game, the first in 33 games this season for the GCL Pirates. Norkis Marcos went 2-for-2 with his third double, his tenth stolen base and a run scored. A single by Jase Bowen was the only other hit.

In game two, the Pirates lost 1-0 on a walk-off walk. Arlinthon De Dios started and went 4.2 shutout innings on three hits, two walks, and eight strikeouts. It’s the second straight game in which he has increased his career high in strikeouts, picking up six in his last outing. Jake Sweeney tossed 1.1 scoreless before Angel Suero walked in the winning run on three walks and an infield single.

The Pirates had very little offense in this game. Four players picked up one single each, while Carlos Canache drew the lone walk. He stole second base, but was thrown out trying to steal third. The top four in the lineup went 0-for-12 with eight strikeouts.

The DSL Pirates1 lost 16-11 to the Indians. Valentin Linarez started and got roughed up, allowing four runs in 2.2 innings. He has a 2.78 ERA in 45.1 innings this season. Argenys Dominguez followed and he surrendered six runs while record just two outs. He has pitched poorly all season, posting a 22.65 ERA in 10.1 innings over 12 appearances. Dominguez has given up at least one run in ten of those 12 outings. Raul Mora settled things down for a bit with 1.1 scoreless, followed by one run over 1.1 innings by Wilkin Valdez. Jarlin Yes allowed five runs over the final two innings.

The pitching was awful to put it nicely, but the offense put 24 runners on base. It was fairly well spread out throughout the lineup, with all 12 position players they used reaching base at least once. Francisco Quintero had a single, double, walk, two runs scored and two RBIs. Jose Berroa had a single, three walks, his ninth stolen base and two runs scored. Rafael Escalante reached on a double, walk and hit-by-pitch, scoring two runs. He played three different positions, going from first base to catcher to second base. They actually used three different catchers and all of them were still in at the end of the game. Juan Jerez had a single, his 11th double and two RBIs. Sergio Campana had two hits.

The DSL Pirates2 won 17-10 over the Giants. The game wasn’t actually that close, with the Giants putting up eight late runs to make it a little less embarrassing. The Pirates got strong starting pitching from Sergio Umana, who tossed four shutout innings on two hits, no walks and five strikeouts. Jose Amaya allowed two runs over three innings. Alex Rosario gave up five runs in the eighth and Francisco Hodge allowed three runs in the ninth.

The offense was a team effort and included a strange line. Deivis Nadal drove in three runs on three separate outs, going 0-for-4 on the day with three RBIs. Mario Jerez had two hits, a walk, three runs scored and three RBIs. Carlos Arroyo had four hits, three runs scored and an RBI. He hit his ninth double and stole his 13th base. Geovanny Planchart reached base in all five trips to the plate, with two hits and three walks. He scored four runs. Randy Romero raised his average to .409 with a 3-for-6 game. He stole two bases and he’s now 29-for-29 in steals. Alexander Mojica had a single and his 12th double. Fabian Urbina went 2-for-4 with two runs, two RBIs, his first pro triple and a walk.