Jon Morosi reported on MLB Network earlier today that Derek Shelton, who is the bench coach for the Minnesota Twins, is likely to be considered for the open Pittsburgh Pirates managerial position. The Pirates parted ways with Clint Hurdle yesterday.

The Twins are currently in the playoffs, so the interview of Shelton will have to wait a little bit before it happens. Shelton is 49 years old and has been a coach in the majors for the last 15 years. He began his baseball career as a minor league catcher for the New York Yankees back in 1992, playing two seasons of pro ball before elbow surgery ended his career. His father also played minor league ball.

Shelton has mostly been a hitting coach during his MLB time, holding that position with the Cleveland Indians while Neal Huntington was there, followed by a seven-year stint in Tampa. He’s been the bench coach for the Twins the last two years and even stepped in to manage two games while Paul Molitor was at the Hall of Fame ceremony in 2018 (games are still credited to Molitor officially). Shelton has three seasons of minor league managing experience.

Derek Shelton, highly regarded #Twins bench coach, is likely to be considered for #Pirates managerial vacancy, as I just reported on @MLBNetwork. Shelton was a finalist for #Rangers job last offseason and worked well with Neal Huntington while both were in Cleveland. @MLB

Bet Online has posted odds for the next Pirates manager, just to give you an idea on who else might be considered the favorites: 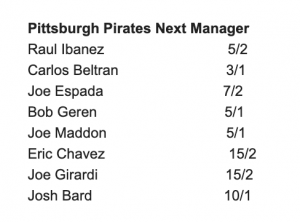