Altoona Curve Season Recap: A Down Year for Top Prospects in the System 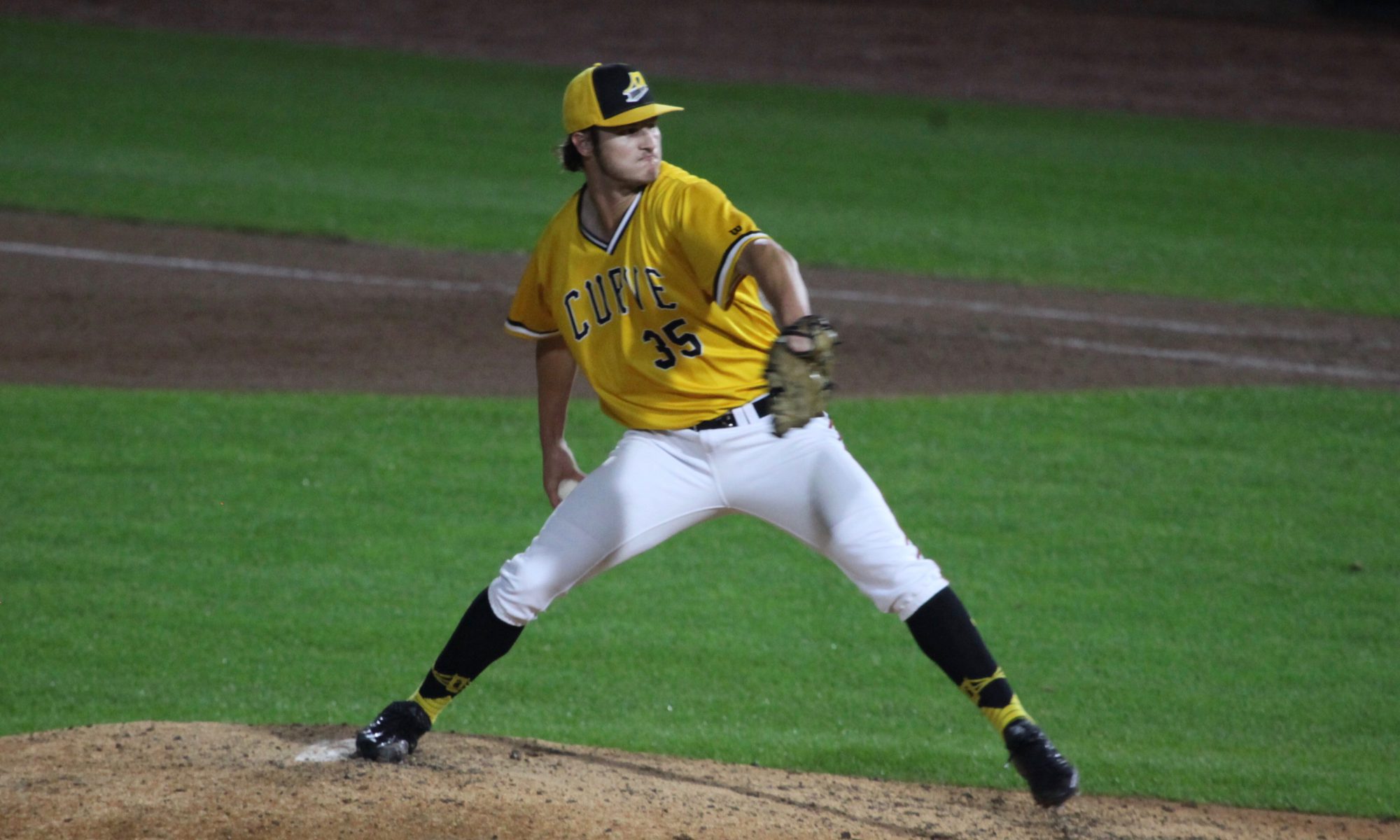 The Pittsburgh Pirates had a nice group of prospects at three of their four full-season affiliates. That was true last year as well, when Bradenton was the weak link of the group. This year, the Altoona Curve were the team that was overshadowed by everyone else on the prospect side.

The Curve finished with a 69-71 record, losing their final four games to drop below the .500 mark. For the first time in the Eastern League, they played a split schedule this season with a first half and second half winner in each division. Altoona played better during the first half, finishing second overall, before dropping to fourth in the second half.

Here’s a look at all of the noteworthy players on the team this year. Tomorrow we will post the top ten prospects list for the Curve. Here are the previously released season recaps:

The top prospects headed to Altoona on Opening Day were outfielder Jared Oliva, shortstop Stephen Alemais and pitcher Gage Hinsz. Alemais ended up playing just 12 games before shoulder surgery ended his season. Hinsz got hurt after Opening Day, but before his first start. He then had a setback during rehab, which cost him his entire season and put his 2020 Opening Day chances in doubt. Oliva received a concussion in the first inning on Opening Day, but he missed minimal time. Other prospects joined the team and one player showed enough improvements to establish himself as a legit prospect, so it wasn’t a completely lost season.

We start with Oliva, who got off to a slow start and finished on a down note, but he put up big numbers in the middle, which led to an overall average season at the plate for the 23-year-old center fielder. His final slash line was .277/.352/.398 in 123 games, with 24 doubles, six triples and six homers. That .750 OPS hides the strong month of June and the .987 OPS he put up in July, which earned him our Player of the Month honors. Oliva adds value with his defense in center field and his speed on the bases, with the latter leading the Pirates system with 36 steals.

Without Alemais, there was quite a drop to the second best position player prospect actually playing during the 2019 season for the Curve. Third baseman Hunter Owen provided the offense for the team early on before receiving a mid-season promotion to Indianapolis. His offense didn’t carry over to Triple-A, but the 26-year-old Owen was a huge bat for Altoona, hitting .295/.369/.595 in 68 games, with 15 homers. At the time of his promotion, he ranked second in the league in both average and slugging, and third in OPS. Owen also showed improved defense at third base.

Logan Hill had another solid season for the Curve, while also seeing some time in Indianapolis. He hit .258/.332/.428 in 113 games, with 27 doubles and 12 homers. Hill added first base to his resume this year, splitting time there with Jerrick Suiter, who hit .235/.279/.299 in 121 games. It was a rough season for Suiter, who spent all of 2018 with Indianapolis and had slightly better numbers at the higher level.

Mitchell Tolman saw regular time at second base prior to a late promotion to Indianapolis. He posted a .684 OPS in 116 games, with ten stolen bases and some solid defense. Brett Pope started off slowly as the backup infielder at three spots, then finished off the year much better. After failing to post a .700 OPS in any of his first four months, Pope had an .882 OPS in August when he received his most playing time. During games when Altoona had an infield of Owen, Pope, Tolman and Suiter from third base to first base, it was one of the best defensive alignments in the system and helped out the Altoona pitching staff.

At shortstop, Robbie Glendinning and Oneil Cruz each saw regular playing time after their promotions from Bradenton. Glendinning came up at the All-Star break, after leaving the FSL as the top hitter in the league (led by a wide margin in OPS). He hit .261/.346/.391 in 58 games with the Curve before suffering a late season ankle injury. He’s healthy now and will be playing the entire winter season in Australia to help make up for some lost at-bats. Cruz just the club late and didn’t play enough to qualify for our top ten list tomorrow (he was #1 on Bradenton’s list).  He hit .269/.346/.412 in 35 games for the Curve.

Besides Oliva and Hill in the outfield (when he wasn’t at first base), there were two other players of note. Bligh Madris led the Curve in at-bats and games played. The 23-year-old right fielder hit .260/.324/.379 in 132 games, with 26 doubles and eight homers. Chris Sharpe joined Altoona mid-season, after an excellent first half in Bradenton. In 68 games with the Curve, he hit .216/.278/.429, with 14 doubles and 11 homers. He had 50 extra-base hits over the entire season and stole 17 bases.

On the pitching side, the trio of lefty Cam Vieaux and right-handers James Marvel and Pedro Vasquez, provided the Curve with outstanding work over their combined 53 starts. Marvel had a breakout season by improving his curveball, which led to even better results in the hitter-friendly International League, then a promotion to the Pirates for four starts in September. Marvel posted a 3.10 ERA and a 1.07 WHIP in 101.2 innings with Altoona. Vasquez and Vieaux also saw some time in Indianapolis. Vieaux had the best stats of the three with the Curve, posting a 2.23 ERA and a 1.08 WHIP in 76.2 innings over 13 starts. Vasquez finished second on the team with 123 innings and he had a 2.71 ERA, which ranked him fourth in the league among all qualified starters.

During the season, the Curve received a top pitching prospect in Cody Bolton, who dominated in Bradenton, but had trouble avoiding the big innings in Altoona. The 21-year-old right-hander posted a 5.85 ERA and a 1.33 WHIP in nine starts with the Curve before being shut down due to his workload, which was a large increase over his 2018 totals when he missed half of the year due to a forearm injury.

Young lefty Domingo Robles received an early season promotion from Bradenton and made 18 starts with the Curve. He had some issues, though he finished strong with six earned runs over his final 34 innings (five starts). Robles posted a 4.02 ERA and a 1.30 WHIP in 103 innings with Altoona.

The rotation saw the most work from Sean Brady, a lefty who was released by the Cleveland Indians early in the year, then signed with Altoona five days later. He was an innings eater in the rotation, putting in 138 innings in 22 starts. Brady led the Eastern League in innings pitched, despite making two early season starts in Triple-A.

Brandon Waddell spent seven starts with the Curve, after being demoted from Indianapolis. He out-pitched during his brief time, but that’s to be expected from someone with significant Triple-A experience.

On the relief side (sort of), Beau Sulser saw a ton of work, though he filled in as a starter occasionally, so that helped increase his overall innings total. He’s currently working as a start in the Arizona Fall League. Sulser did much better as a reliever this season, with a 2.25 ERA in 68 innings, compared to a 3.86 ERA and a 1.39 WHIP as a starter.

Blake Cederlind began the year in Bradenton and finished in Indianapolis, but in between he had a 1.77 ERA, a 1.03 WHIP and 42 strikeouts in 45.2 innings. That was after struggling through the second half of 2018 with Bradenton, where he had a 7.59 ERA and a 2.11 WHIP in 17 appearances. Cederlind impressed most with his velocity, hitting triple digits often, topping out at 102 MPH.