I’m tired of writing the same article over and over at the end of every season.

I’ve been doing my preseason ZiPS analysis every year since 2013. My favorite part of that article is how it shows at the end of the year exactly where the Pirates’ plans went right and wrong. And over the last few years, there has been a disturbing trend.

As a reminder, here was this year’s recap:

Williams: The Few Things That Went Right and the Many That Went Wrong For the Pirates in 2019

Where Did the Pirates Exceed and Fall Short of Projections in 2018?

The 2017 article gets into spoiler territory with the title:

First Pitch: Pirates Had Too Many Players Falling Short of Projections in 2016

Here’s the crazy thing about that: I didn’t realize how similar those articles were until this week, after I wrote this year’s version. Looking above, I even had a similar opening paragraph each year. That’s definitely not planned. I haven’t been writing the same article for four years in a row just to combine them all today and tell you about a disturbing trend of the Pirates falling short of projections.

Well, I have been writing the same article four years in a row about falling short of projections. It just hasn’t been my choice, and I feel it needs to be pointed out now.

That’s four years in a row of the Pirates massively falling short of their preseason projections. Even in their one winning season, they fell short of those expectations, primarily on the pitching side that year.

Since I did the same article from 2013-15, I wanted to continue looking at those teams to see how things were different in a winning season. Same format as above:

That’s a much different picture. The Pirates performed at, or above expectations each year. There were only two groups in that three year span that fell short of expectations: the 2015 hitters and the 2014 pitchers.

The pitching fueled the 2013 and 2015 teams, far exceeding expectations. This was during the reclamation project years, where the Pirates were getting tremendous value out of guys like A.J. Burnett, Francisco Liriano, Edinson Volquez, J.A. Happ, and so on.

I think these numbers are very telling, especially when presented all together like this: 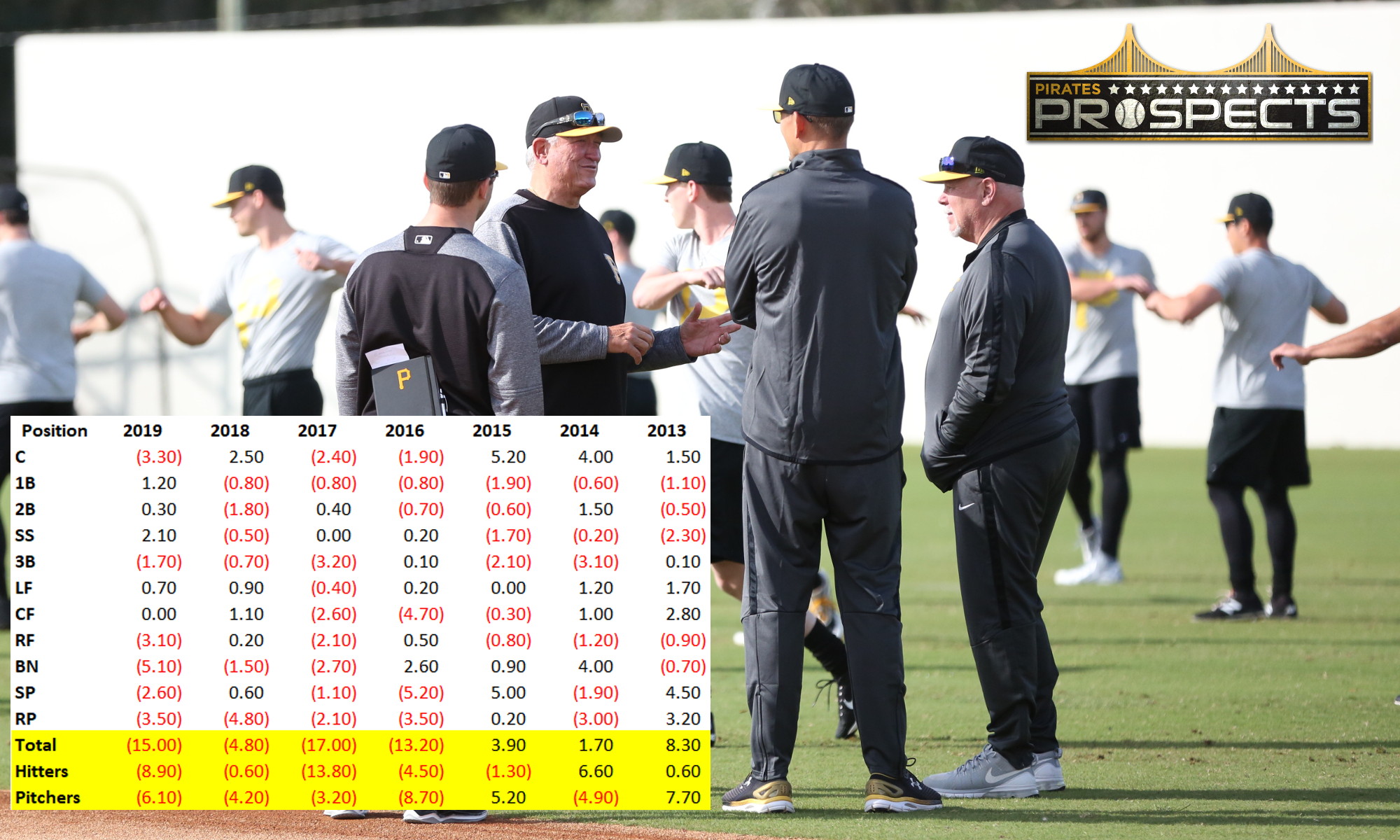 Some quick thoughts, which I’ll expand on tomorrow morning:

**I think this justifies the firing of Clint Hurdle. The team underperformed four years in a row, and in a big way for three of those years. It’s hard to keep the manager around through those results.

**I think this also makes a clear case for not bringing back Ray Searage. That pitching line shows a clear split in trends, where the Pirates were successful up through 2015, then suddenly started underperforming in a big way. That’s also when the league started moving away from a fastball-heavy approach, and Searage didn’t make that switch, among other necessary changes to adjust to the game today.

**The development team, led by Kyle Stark and Larry Broadway, can be called into question in 2016 and beyond, as those teams promoted a lot of prospects who didn’t meet their expectations. Some of them went on to play well elsewhere, but the Pirates didn’t get anything close to the upside they hoped for from the wave of prospects that arrived during the last four years.

**Finally, you have to put blame on Neal Huntington. He got credit for assembling the 2013-15 clubs, and for how those clubs out performed their expectations. That’s because there was a clear plan in place, which involved focusing on infield defense and defensive shifts, getting pitchers with upside who could benefit from a mechanical adjustment and the strong infield defense, and generally looking for upside in a lot of outside additions.

The moves the last four years have lacked that upside. They’ve lacked that cohesive plan. The Pirates had a single direction in 2013-15, and now they’ve been stuck between giving the prospects time to work out, and bringing in lower upside additions from the outside who, at best, are expected for average production, even in the case of reclamation guys.

Huntington is responsible for everything in this organization, and you can’t look at those results and have confidence that he’s magically just going to fix everything that has been wrong the last four years by firing Clint Hurdle.

We’ll have an article going up this afternoon. We’ll also have any news that comes out.

Question: Do you guys want a dedicated live discussion thread throughout the playoffs? There are enough ex-Pirates involved that it would almost be on theme. Let me know in the comments.

I haven’t tried this one yet, but it looks fun.

Nine former Pittsburgh Pirates born on this date, starting with a Hall of Famer:

Fred Clarke is in the Hall of Fame as a left fielder, but he could just as easily be in as a manager. He was already a star before joining the Pirates in 1900. He hit .334 in his first six seasons with Louisville, the last three years as the manager. Clarke then hit .299 over 1,479 games with the Pirates, four times leading them to an NL title and once to a World Series title. He scored 1,622 runs during his career and hit 220 triples, which ranks seventh all-time. As a manager, he had a 1,602-1,181 record in 19 years.

Phil Gosselin, infielder for the 2017 Pirates. He played his seventh season in the majors this year and has already played for six teams. Gosselin hit .190 in 28 games for the Pirates.

Alex Ramirez, outfielder during the 2000 season for the Pirates. He hit .209 with four homers in 43 games after being acquired mid-season from the Cleveland Indians. It would be his last MLB experience, but far from the end of his career. Ramirez went to Japan for 13 seasons, where he was a star player. In pro ball, he hit a total of 505 homers between 1993 and 2013.

Wil Cordero, left fielder for the 2000 Pirates. He batted .282 with 16 homers in 89 games with the Pirates before being traded for some guy named Alex Ramirez. Cordero played 1,247 games over 14 seasons in the majors.

Manny Martinez, outfielder for the 1998 Pirates. He hit .250 with six homers in 73 games for the Pirates, one of four teams he played for during his three-year career in the majors.

Jack Lamabe, rookie pitcher for the 1962 Pirates. He had a 2.88 ERA over 78 innings in his only season with the Pirates. In the off-season, he was traded with Dick Stuart to the Boston Red Sox. Lamabe played seven years in the majors.

Frank Kalin, outfielder for the 1940 Pirates. His big league career consisted of an 0-for-3 in three games for the Pirates (he had two walks and an RBI) and an 0-for-4 in four pinch-hitting appearances for the 1943 Chicago White Sox.

Johnny Riddle, catcher for the 1948 Pirates. He played just ten games with the Pirates in the last of his seven years in the majors. He does have a bit of a footnote in team history, as his younger brother Elmer Riddle was a pitcher for the 1948-49 Pirates. Despite spending the whole season together, with Johnny as a seldom-used third string catcher, they were the battery for just two batters and both ended up hitting home runs.