Tomorrow night, I will be doing three things:

I wrote about that last one a week ago, following a game where I watched the Rays — featuring Charlie Morton, Tyler Glasnow, and Austin Meadows — winning the Wild Card game, which sent them to the division series against the Astros — led by Gerrit Cole.

And now we reach the deciding game five in that series, which sees Cole and Glasnow facing off to advance to the ALCS.

To help you prepare for that matchup of former Pirates aces-to-be-that-weren’t-but-now-are-on-other-teams, I decided to go back through the old prospect guides and look at the predictions for Cole and Glasnow.

I recommend you don’t read the rest of this. Skip to the song of the day. Talk about comic books or cats in the comment section. Don’t ruin your day. Or do…

First up, we have this paragraph from the 2012 Prospect Guide, looking at the first view of Gerrit Cole. The bold is my emphasis now.

The top prospect of the bunch was taken with the first overall pick of the 2011 draft. Gerrit Cole has an arsenal of pitches that could potentially make him one of the best in the game. He throws his fastball in the upper 90s, constantly hitting triple digits, and sitting 98 MPH even after 100 pitches. One of the special things about Cole is that he tends to add velocity as the game goes on, rather than seeing a drop in velocity. There’s no explanation for it, and he insists that he’s not holding anything back early in the game. The same thing happens to Justin Verlander, who Cole often gets compared to.

Game Plan: I’m going to need a beer for tomorrow night’s game. A barrel aged stout. Over 10% at least.

Next up is Cole’s prospect report from the 2013 guide, when he was the number one prospect in the system, and close to making his MLB debut. 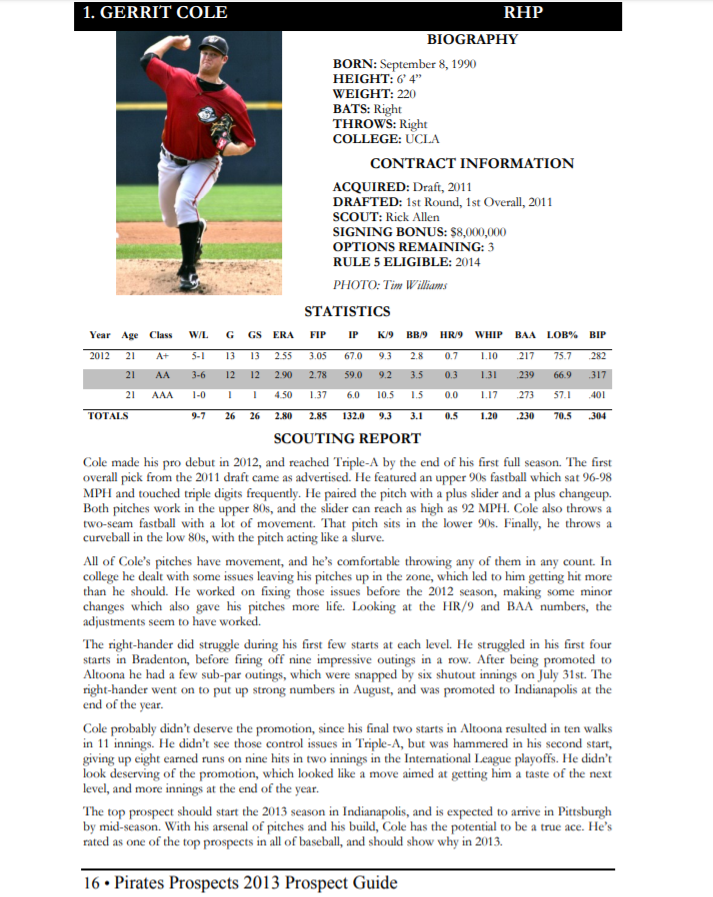 Career Recap: Cole was a really good pitcher from 2013-15, ranking among the top 20-30 in the game in a lot of key stats. But he never reached the top level during that time, then struggled in 2016 and 2017. The struggles were in part due to injuries, and in part due to not using his pitches correctly — especially his slider, which was under-used throughout his Pirates career.

Game Plan: I’m keeping the beer from above, and adding another beer. Maybe a barrel aged barleywine.

We’ll switch gears and go to Tyler Glasnow’s report from the 2015 guide, when he was the number one prospect in the system. 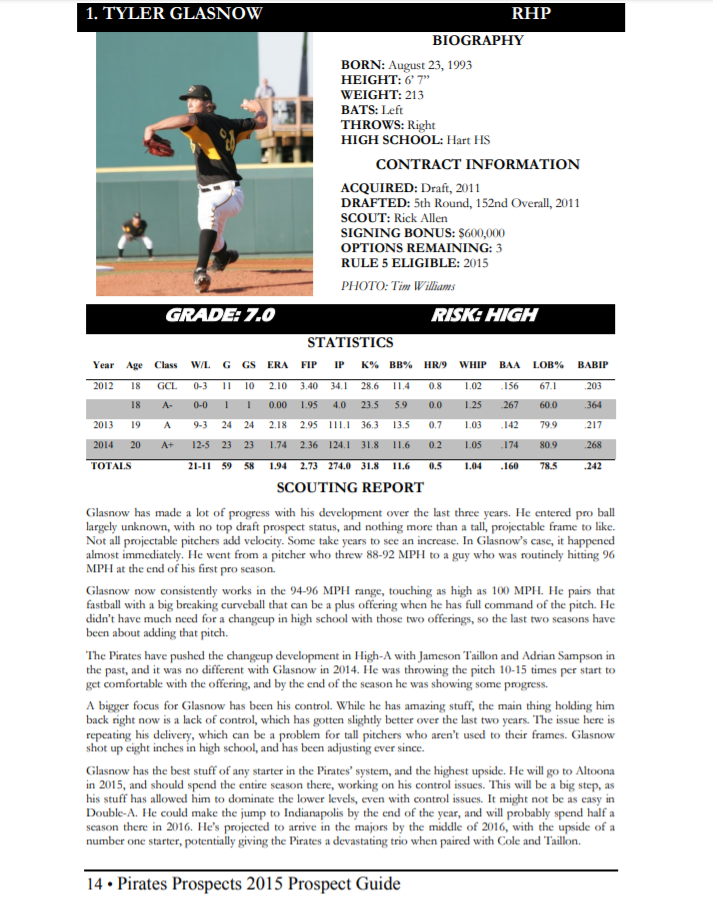 Key Quote: “He’s projected to arrive in the majors by the middle of 2016, with the upside of a number one starter, potentially giving the Pirates a devastating trio when paired with Cole and Taillon.”

Key Analysis: Glasnow did arrive in 2016, but put up average numbers in a brief appearance in the majors. He really struggled in 2017, and was moved to the bullpen in 2018 before the trade.

Game Plan: Before drinking those beers, I’m going to need to get high. I’m thinking the weed I reserve for my worst migraines.

Finally, we have this section from my article in the 2016 guide, looking at The Next Wave, which included Tyler Glasnow and Jameson Taillon.

The Pirates didn’t have any top prospects jump to the majors during the 2015 season. What they lacked in 2015, they will make up for in 2016. Tyler Glasnow, Josh Bell, Jameson Taillon, Alen Hanson, and Elias Diaz are all projected to arrive in the majors at some point this year, and the overall upside could be two top of the rotation starters to slot in behind Gerrit Cole, plus the future starter at three of the eight positions on the field.

Glasnow is the highlight of the group. For years, the Pirates were drafting over-slot prep pitchers in the middle rounds, with the hope that one of those guys would break out in the system and become an elite prospect. Glasnow did just that, going from a guy who had very few reports surrounding him on draft day, to a guy who is now one of the top prospects in all of baseball. He’s got top of the rotation upside, but will need to improve his command and learn to throw his secondary pitches for strikes on a consistent basis before he will be ready for the majors.

Then there’s Taillon, who was once the top prospect in the organization, but has slipped after Tommy John surgery and a hernia surgery put him out for the last two years. He still has a lot of upside, and used the rehab time to improve his mechanics, leading to a much easier throwing motion, and finally being able to throw downhill on a consistent basis. After watching him closely for years, the biggest thing that stood out to me during his rehab this year was that his mechanics looked the best they’ve ever looked.

When Glasnow and Taillon arrive, and if they reach their upsides, they could combine with Gerrit Cole for the best starting pitching trio in baseball.

It’s not just going to be pitching that the Pirates will get this year. They have no long-term first base option in the majors, which is a big reason why they moved Josh Bell to the position prior to the 2015 season. The former right fielder struggled with the new assignment, showing some serious problems with his footwork throughout the year, and missing a lot of the defensive basics at the position.

Bell did start to tap into his offensive potential at the end of the year, making a key adjustment to a leg kick that he was incorporating in his swing, which led to increased power production in Indianapolis. He’s got issues with his swing from the right side, but every time I bring this concern up to scouts, I get the response that he should be good enough to be an everyday player, even if the swing from the right side has far less power than the left side.

There is some defensive work that still needs to be done, and Bell will need to show that his late-season power production wasn’t a fluke. When he’s ready, first base will be open for him. He might not provide any defensive value to start with, but that wouldn’t be a big change over what the Pirates had with Pedro Alvarez in 2015. Bell’s bat would make up for that, with the hope that his defense eventually develops to the point where he isn’t a huge liability on the field.

2019 Stats: Cole (39.9%) and Glasnow (33%) ranked 1st and 8th respectively in strikeout percentage this year among starters with 60+ innings. Glasnow ranked first with a 1.78 ERA, while Cole was fourth with a 2.50 ERA, which is more impressive considering the innings difference (212 vs 60). Cole ranked first with a 2.48 xFIP, while Glasnow ranked fourth with a 2.94 xFIP. Max Scherzer and Chris Sale were between the two, for reference.

Just a friendly reminder that all of the previous editions of the Prospect Guide are available for free for subscribers.

See you on the other side, Ray!

Eight former Pittsburgh Pirates born on this date, including one who threw a no-hitter.

Bob Moose, pitcher for the 1967-76 Pirates. He had 76 wins and a 3.50 ERA in 1,303.1 innings over his ten seasons in the majors. His .824 winning percentage led the majors in 1969 and he pitched a no-hitter on September 20th against the New York Mets, just a month before they would win the World Series. Moose passed away tragically on his 29th birthday in an automobile accident. You can read more on Moose here.

Felix Fermin, shortstop for the 1987-88 Pirates. He batted .265 in 66 games during his two seasons with Pittsburgh, collecting two triples, with no doubles or homers. Played a total of ten seasons in the majors.

Ray Krawczyk, pitcher for the 1984-86 Pirates. Was drafted three times in the first round before signing with the Pirates in 1981. He didn’t live up to those expectations, posting an 8.65 ERA in 24 appearances/26 innings with the Pirates, and a career 7.05 ERA in 52.1 innings over five big league seasons.

Jack Tising, pitcher for the 1936 Pirates. He debuted in the majors at 32 years old and lasted just one season, putting up a 4.21 ERA in 46 innings over six starts and four relief appearances.