Williams: It’s Well Past Time For Bob Nutting to Explain What is Happening With the Pirates Right Now 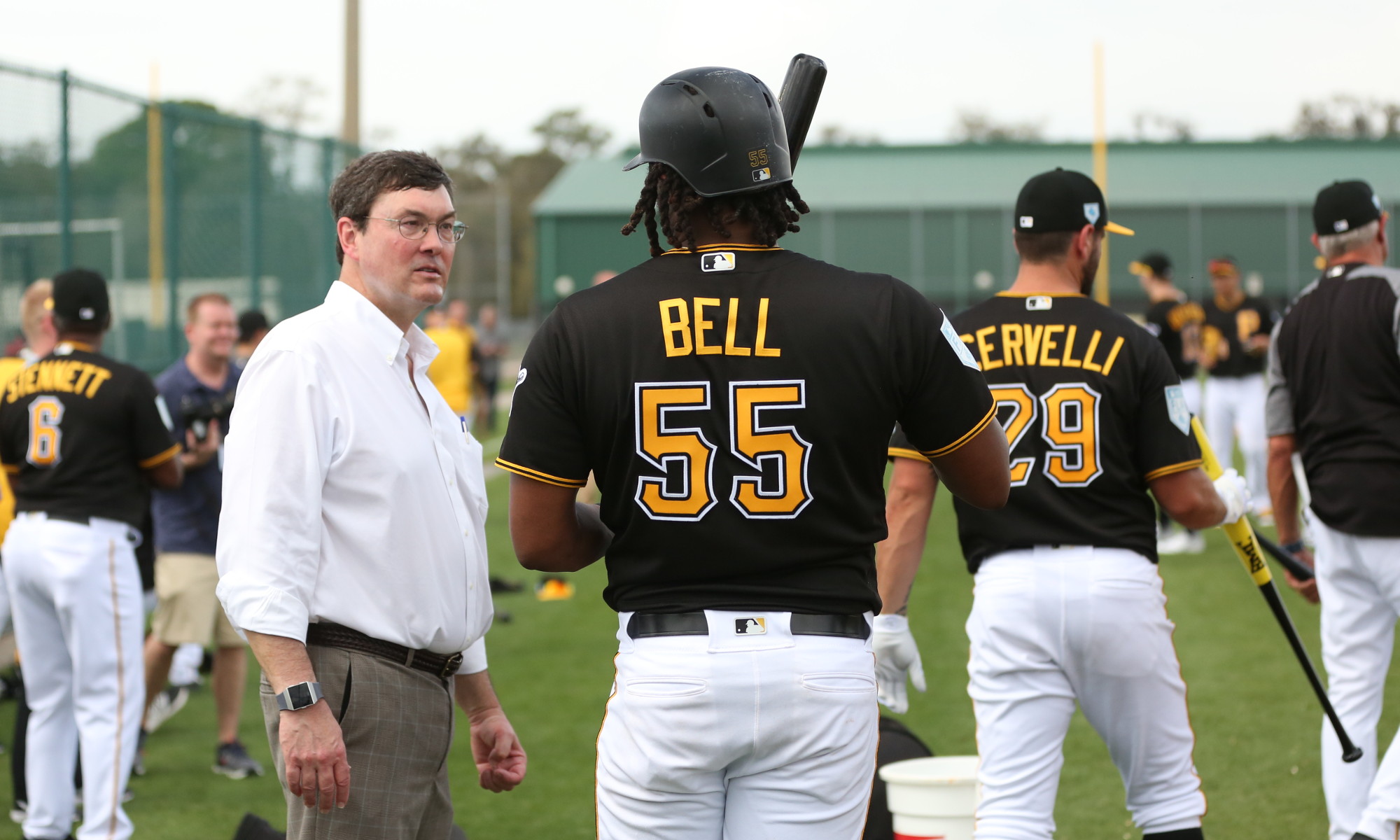 I have so many questions.

When I first heard the Frank Coonelly news, one of my immediate thoughts was about the impact to Neal Huntington. Was his job now in jeopardy? Could he be the new president?

The latter question was answered first by Adam Berry.

I've heard Neal Huntington will not replace Frank Coonelly as team president. But I would expect Huntington to remain as GM considering Bob Nutting himself said last month that Huntington and his staff are "the right people to continue to lead our baseball operations department."

The former question has been answered in a way, with Jason Mackey saying Huntington will stay in his position as GM.

Sure sounds like Neal Huntington will stay in position as general manager. View is that the risk of significant setback is too great. Also, and sort of related, Huntington is not a candidate for Pirates president gig.

So Neal Huntington is in, but remains as the GM. That shouldn’t be a surprise, I guess, since Bob Nutting was the one who issued the following statement when Clint Hurdle was fired:

“While we felt it was time to make a change at the managerial level, I strongly believe that Neal Huntington and the leadership team that he has assembled are the right people to continue to lead our baseball operations department.”

That means any president who replaces Coonelly would probably be geared for the business side. And sure enough, as I’m writing this column, it was reported by Jason Mackey (obviously) that the Pirates will hire Travis Williams to be the next president.

My initial reaction to this news was “Did that say Tim Williams? Shit, I literally just got finished unpacking boxes in Raleigh. Wait, the name is too long. Is that Trevor Williams? Oh I am so on board with this! No wait, Travis Williams. He sounds like a country music singer. Or maybe like a country music record label executive at the least. This is going to make for some inevitable post-game concert and firework show joke.”

Well, it turns out Travis Williams was the former COO of the Pittsburgh Penguins, so you probably know him better than I do, as my current knowledge of the Penguins is to know that they’ve got Sidney Crosby, Evgeni Malkin, Matt Murray, and I’m always only 60% sure that Kris Letang is still a Penguin and wonder things like “Is Chris Kunitz still with the team?”

Sure enough, he’s also got a business background. According to Mackey, he was one of the keys to the Penguins getting a new arena, and worked on their TV deal with FSN Pittsburgh when it was AT&T SportsNet.

Note that I’m saying they announced the change, because we don’t know when they decided the change. This clearly was in the works for awhile, as you don’t otherwise announce the old president is leaving and the new one is already selected but for some reason going to be announced almost a week later.

This brings up a valid question about the new TV deal: Who negotiated it?

Was it Coonelly? Or was it Williams?

If it was Williams, then this all makes sense. The biggest issue for the Pirates on the business side this offseason was the TV deal. So it would make sense to bring in someone who has already recently negotiated a TV rights deal with the same network. Williams got $18 M per year for the Penguins, which ranks 10th in the NHL for local TV deals.

I don’t imagine the Pirates got in the top third of MLB deals — that would require around $50-60 M a year — but they definitely needed to do better than the last deal, which had them ranked in the bottom five of current local TV deals.

So it would make sense if Williams was brought in to help with that deal, and the only confusing part would be why the Pirates announced everything in this order.

The alternative is that Coonelly negotiated the new TV deal, and then the Pirates made a change a few weeks later. If that’s the case, then there are so many other questions. Who initiated this change? Is it, as Dejan Kovacevic is saying, that Coonelly is leaving for a job with MLB? Or is this part of the shakeup for the Pirates? And either way, at which point did the Pirates know there would be a change, and why would they negotiate their new TV deal before a change is announced?

I hope we’re going to find out everything on Monday, and I hope that it does make sense. But let’s go back to that Nutting press release for a few more key quotes to illustrate the real problem here:

“This has easily been the most difficult season of my tenure. Today we announced that we are parting ways with Clint, but make no mistake about it, this is by no means a statement that our shortcomings are solely Clint’s fault. The entire organization is accountable and that begins with me.”

Everyone knows that it all begins with Nutting, but he’s basically putting it all on himself now. He’s the one saying Neal Huntington is the best option moving forward, and he’s the one who hired the new president. This isn’t new. Nutting has been responsible for who is running this organization for a long time, through the good times and bad. This is just another reminder that Neal Huntington and Travis Williams are his picks to lead the team going forward.

“Neal and his leadership team are well into an extensive review of every element of our baseball operations. In addition, as an organization, we need to improve in the ways we connect with our fans.

“It is very clear that we need to and will be better. There is no quick fix, but we are absolutely committed to the task. I believe we can and will achieve it.”

A lot of the reports today have mentioned that Nutting was upset with the declining attendance and fan perception, but I’m not sure whether they’re going off this comment from the press release.

There’s also the comment about “Neal and his leadership team” which follows up on his earlier comment when he said:

“I strongly believe that Neal Huntington and the leadership team that he has assembled are the right people to continue to lead our baseball operations department.”

Does this mean that everyone under Huntington is still in the same position? Kyle Stark, Greg Smith, Joe DelliCarri, Larry Broadway, and so on? We don’t know that either.

This all leads to the big problem: No one knows what the fuck is going on.

Nutting said they need to improve on ways they connect with the fans, and that there is no quick fix, but they’re committed to the task.

It’s not a quick fix, but here’s a shove in the right direction: Maybe clue the fans in on what is happening.

This organization has been super secretive about any and every move they make, and often that is what leads to a major disconnect with the fans. Bob Nutting talks once a year to reporters, saying the same thing every year, and none of it actually considers the issues the fans have with the team.

Pirates fans don’t think Bob Nutting cares about winning, and that he only cares about profits. It doesn’t really help counter that perception when most successful teams in MLB have baseball people as their president, and the Pirates brought in a business guy who has specialized in the one thing this offseason that could lead to bigger income for them.

It also doesn’t help that the Pirates haven’t been clear about any of the problems that have led to four straight losing seasons, and a gradual decline for the organization as a whole.

What is going to be different?

Have they changed their approach on the budget in relation to deficit spending?

Have they changed their view that you can contend every year without a rebuild, even though the opposite is shown true all over MLB?

Have they figured out what went so horribly wrong with the Chris Archer trade?

Have they figured out why guys like Gerrit Cole, Tyler Glasnow, Austin Meadows, Charlie Morton, and others have gone on to see much better success with teams regarded as some of the smartest analytical teams in the game — a group that included the Pirates for a few years?

Have they figured out why hardly any of their prospects get close to their expected upsides while they are in Pittsburgh?

Are Stark, Broadway, Smith, DelliCarri, and whoever else remaining in the organization?

If Stark, Broadway, Smith, DelliCarri, and whoever else are sticking around, what changes will be made to improve the results from the minor league system?

Are they going to be making analytics a mandatory part of the development process similar to how it appears to be with the Astros and Rays?

How much is the new TV deal and how will any increase be used to help improve the team?

I could keep going, but you get the point. The Pirates have made absolutely no attempt or effort to improve on how they connect with the fans. Maybe that will change on Monday when they announce the new president. Maybe Monday will be the big day that Bob Nutting emerges and actually answers some of these questions.

I hope that happens. Because this organization seems like chaos from the outside right now, either unable to see the problems in front of them, or unwilling to care about those problems. And their fans are likely going to think it’s the latter, at least until the organization proves to them that they’re fixing the problems from the former.