First Pitch: The Argument For the Pirates Trying to Win Now 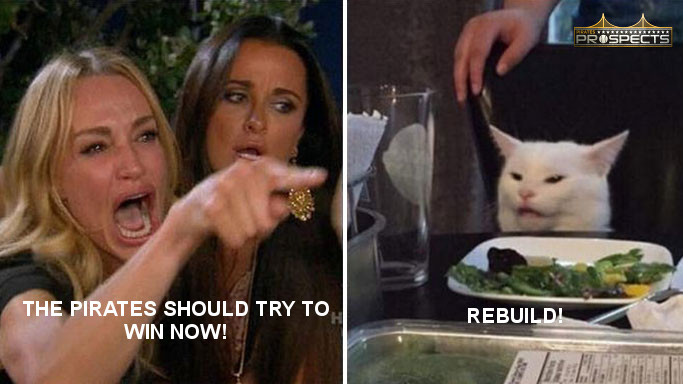 Both paths require a departure from the strategy the Pirates had in the past, whether that’s with their approach to spending and winning when the window is open, and/or better results with development.

Today I’m going to focus on the “win now” path. It’s not my preferred path, and hopefully you’ll see why after tomorrow’s article on rebuilding. My focus for both of these is going to be on the strength of the window the Pirates currently have to work with, along with what they need to do different this time around.

It doesn’t take a deep analysis to know that the Pirates aren’t in great position to win right now, or in the next year or two. They just finished a 93 loss season. Their pitching staff is a mess in 2020, with no clear top of the rotation starter, and it trends down afterward. The offense needs work to remain consistent, and could use an impact guy. The whole team could use an impact guy, as there’s no one I currently see as a >4 WAR guy right now, and very few guys who are >3 WAR.

The pitching is largely built around Mitch Keller right now. Keller made his debut in 2019, and will be under team control through at least 2025. That gives the Pirates a long window with their hopeful future ace. The obvious change needed here is that the Pirates need to get better results from Keller than they did with guys like Gerrit Cole, Tyler Glasnow, or even Jameson Taillon.

Speaking of Taillon, he’s out for 2020 with his second Tommy John surgery. He’s under control through 2022, but there’s no telling how he will return from the procedure, and any future production from him should be considered a bonus.

The other potential top of the rotation guy is Chris Archer, but that’s a situation which will require much better results than the Pirates have already received. I’m not writing Archer off, but he’s also not a guy you should count on for anything other than bonus production.

There is a path to winning with these pitchers leading the staff. It requires Keller to immediately adjust to the majors with top of the rotation results. It requires Archer to bounce back to his old self. It requires Taillon to return from his surgery with no decline in production. Any one of those things is difficult, and the Pirates need at least two things to happen in order to give them a chance in 2020-2022.

It would help if they added an outside pitcher to this group. You’re banking on Archer and Keller in 2020, and all three pitchers in 2021. The Pirates have other starters who are talented enough to be in the rotation, led by Joe Musgrove, Trevor Williams, Chad Kuhl, and Steven Brault as depth. But they’d need someone who could give more top of the rotation results, adding insurance for the three guys they have.

That sets up a window of 2020-2022 for the pitchers, but you’re banking on good results from three questionable situations in the process.

Things don’t get much better on the hitting side. Starling Marte is the top position player on the team, but is only under control for two more seasons. Josh Bell showed some promise this year, and perhaps a new front office with better development methods could get him to that next level of being an impact hitter. However, he’s only under control through 2022.

The Pirates got strong results from rookies Bryan Reynolds and Kevin Newman. You hope for at least 2-3 WAR from each going forward. They’re both under control through 2025, matching Keller’s service. If the Pirates could pull off a fast rebuild, they could try to contend with these three on the other side of the rebuild.

The problem here is that you’re hoping these guys come up and perform immediately to help you win now. This was the big flaw in the Pirates’ offseason plans leading into the 2016 season. The plan of trying to contend with prospects who are hopefully arriving in the year you’re trying to contend is proven to be flawed.

Hayes, Cruz, and Bolton could also join Keller, Reynolds, and Newman on the other side of a rebuild as well, making that side of the argument stronger.

In today’s MLB, you win with impact players, rather than a team full of average or above average guys. If the Pirates were going for it now, they’d be building around Keller, Archer, Taillon, Marte, Reynolds, and Newman, with a few prospects on the way. Archer is gone after 2021, and Taillon is out for 2020. So you’ve only got one year where you might have three top of the rotation starters, and no guarantee that any of those three reach that upside.

This provides a window for 2020-2022, and that window requires outside impact additions, some quick internal turnarounds, and immediate help from the farm system.

I don’t think I need to go further to explain why winning now isn’t a good strategy. It sounds like the strategy the Pirates have been going with for the last four seasons — try to go for it because you have a chance, even if the chance is highly improbable.

Rebuilding is definitely the way to go, and that argument only looks stronger when you look at the prospects in the system and the potential future window to come beyond 2022. I’ll get into that tomorrow.

Wilbur picked today’s song, which he says is the funniest song he’s ever heard.

We just had one of the busiest days for birthdays yesterday, followed today by one of the slowest. Just two former Pirates born on this date and one is very recent. It’s also not a big day for transactions, but I added two of them below.

Charlie Morton, pitcher for the 2009-15 Pirates. In seven seasons with the team, Morton had a 41-62, 4.39 record in 142 starts and 801 innings. The Pirates acquired him in a four-player deal from the Atlanta Braves during the 2009 season, and traded him to the Philadelphia Phillies after the 2015 season.

On this date in 1983, the Pirates sold pitcher Bob Owchinko to the Cincinnati Reds. He pitched one game for the Pirates in 1983, allowing one run on two hits without recording an out. Owchinko made 49 appearances (four starts) for the Reds in 1984, posting a 4.12 ERA over 94 innings.

On this date in 2014, the Pirates traded pitcher Justin Wilson to the New York Yankees for catcher Francisco Cervelli. Wilson had one strong season in the Yankees bullpen before he was traded to Detroit. He was with the New York Mets in 2019. Cervelli played five seasons in Pittsburgh, hitting .264 with 26 homers and 169 RBIs in 450 games.