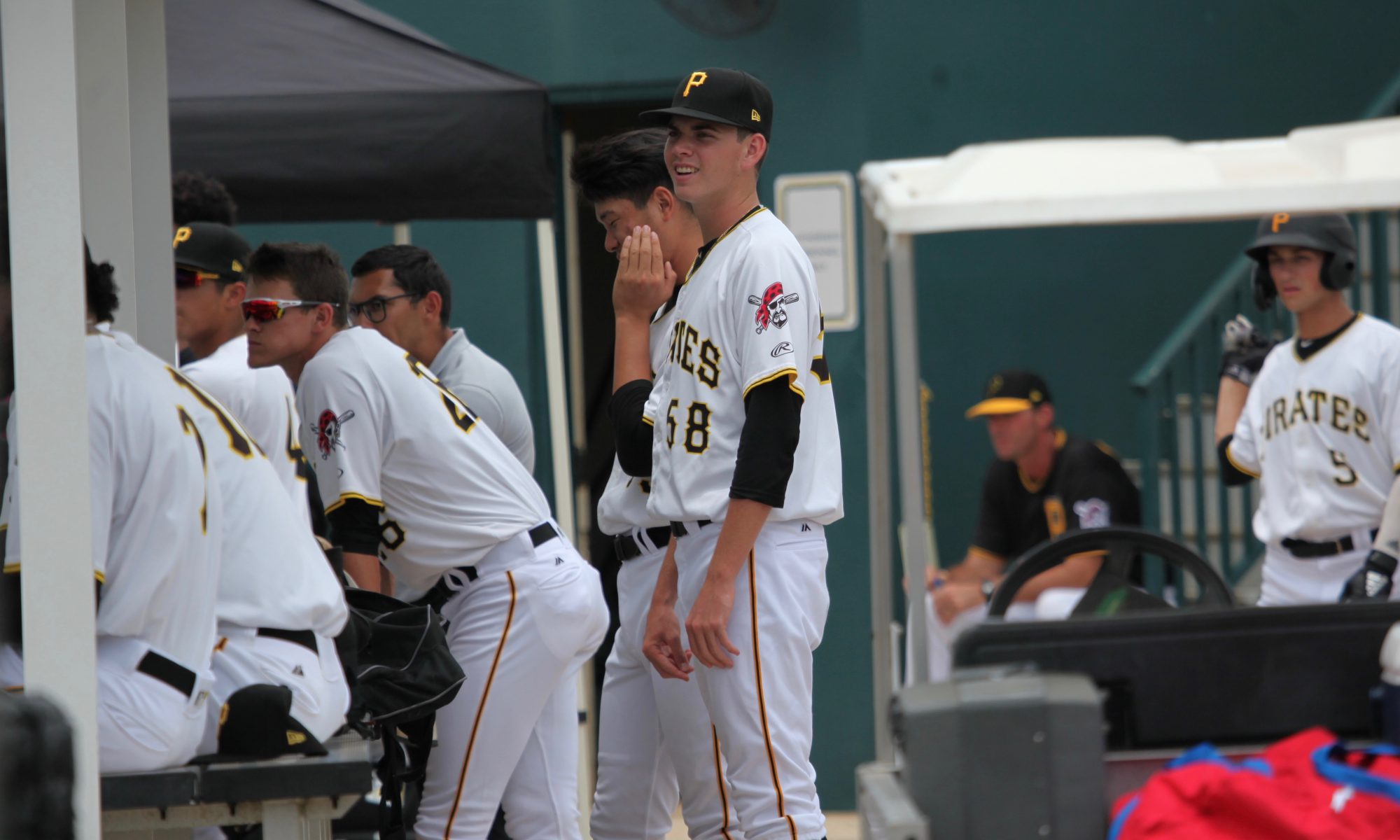 Yesterday’s Morning Report was about the possibility of trading Starling Marte and getting a catching prospect in return. In that article, Tim Williams mentioned that we would provide an update in our 2020 Prospect Guide if they brought in players who changed our top 50 prospects list.

That tied in well with an idea I had yesterday at the same time that he was typing up the Marte article. He was talking about adding prospects to the list, but what if the Pirates made a move that involved trading prospects? Then we would be replacing players on that top 50 list with players already in the system.

In the prospect guide, we break prospects down into tiers to group together similar value players. Our last tier usually includes as many as 10-15 players, who didn’t make the top 50, but were strongly considered for the list because there wasn’t much difference between them and the other players who made the back-end of the list.

This year was completely different. Our final tier had just three players who didn’t make the top 50. The system is at a low for depth right now, though I’d point out that we are really high on the 2018-19 and 2019-20 international signing classes. We don’t include players who haven’t debuted in the U.S. yet in our top 50, so almost all of those players aren’t eligible. Those two groups of signings should help the depth significantly.

That’s something that we can look back on when we do our 2020 mid-season update, but for now, we didn’t have the usual amount of players considered for the back-end of the list. You want to have as much depth as possible because it gives you a better chance of developing some of those players into something more than just players who only make the majors because they’re your best option, which we saw a lot of in 2019 with all of the injuries.

We have had as many as 70 players who drew strong consideration for the top 50 in previous years. This time we had just five, with three of them making our final tier and two others ranking just percentage points below the cutoff for that tier.

Pedro Vasquez – Vasquez was one of the three players in the final tier who didn’t make the top 50. Our prospects ranked 36-50 are in the same tier as him, so if you believe that Vasquez should be in the top 50, just realize that we don’t consider him much different in value than 30% of the players on the list. He put up strong stats in Altoona as a starter this year, then got a brief trial at Indianapolis, which included a one-hit over six shutout innings. Vasquez has a solid three-pitch mix, works very fast and throws strikes. It’s not huge upside because none of his pitches would be considered more than average (his changeup might rank as a 55 on the 20-80 scale), but he’s going to pitch his way to the majors if he stays healthy.

Cody Ponce – Ponce is clearly rated higher by the Pirates because they added him to the 40-man roster over some players who are in our top 50 and not protected from the Rule 5 draft. We obviously considered him for the top 50, as one of the three final tier players who didn’t make it, so he was close. If he made the list, he would be one of the older players, turning 26 in April, plus he has very little Triple-A experience, with average results during that time. He put together some nice stats in the Arizona Fall League, then pitched for Team USA in a World Cup tournament, where he had two strong starts and one very poor outing. Ponce has the makings of a strong reliever, starting with solid control and a fastball that reached 95 MPH as a starter late in the year.

Chris Sharpe – Sharpe offers a nice power-speed combo, along with the ability to play solid corner outfield. He was an over-slot signing in 2017, who was a draft-eligible sophomore. His only real success so far in the minors has been his first half run at Bradenton this year. While he showed decent power after being promoted to Altoona, the walks, average and stolen bases really dropped off, while the strikeouts increased. He’s getting a chance this winter to see some upper level quality pitching in Puerto Rico, and last night aside, his early results have been mediocre at best.

Robbie Glendinning – Glendinning has a similar story to Sharpe. Both played well in Bradenton, then struggled somewhat with the jump to Altoona. Glendinning’s overall line at Altoona is boosted a little by early season success at the level when he was there for two weeks as a fill-in. His stats in the second half dropped off and he was injured late, which are the two main reasons he just missed the top 50. If we did the voting a little later (say today for instance), he may have made the top 50, because he’s playing regularly in Australia and doing well at the plate. He’s a very athletic player, who can handle multiple infield spots, and he showed real promise with the bat this year, leading the FSL in many hitting categories when he was promoted. A nice run in Altoona in 2020 and he will be a surefire top 50 prospect by mid-season.

Ryan Harbin – Harbin (pictured above) was the third player who just missed our top 50, but made the final tier. He’s all about projection, so we might not see him really establish himself as a legit top 50 prospect until 2021, if it happens. The Pirates gave him the biggest bonus they handed out to 2019 draft picks after the fifth round. He has a 6’4″ frame with plenty of projection, showing a fastball that hit 94 MPH in high school and improved control his senior year. He didn’t turn 18 until two months after the draft.

I picked this song because of the title and the chorus. I’ve never heard it before, and I don’t think it’s about missing a top 50 prospects list, but that shouldn’t matter.

Eight former Pittsburgh Pirates born on this date. One of those is Steven Baron, who was a September catcher for the Pirates this year. He turns 29 today. We also have a trade of note.

On this date in 1946 the Pittsburgh Pirates traded catcher Al Lopez to the Cleveland Indians for outfielder Gene Woodling. Lopez had a Hall of Fame career as a manager but he was also a fine player for 19 seasons, including seven in Pittsburgh. Woodling lasted just 22 games for the Pirates, but played another 14 seasons in the majors. Lopez only played 61 big league games after the trade. While the Pirates got the better return, almost all of that value came after he left Pittsburgh.

Bo Belinsky, pitcher for the 1969 Pirates. Belinsky was originally signed by the Pirates in 1956, but didn’t play for the team until 13 years later. In three starts and five relief appearances, he went 0-3, 4.58 in 17.2 innings. Belinsky gained instant fame by throwing a no-hitter as a rookie in 1962, then built on that by dating famous actresses and appearing in TV roles. His baseball career was considered a disappointment though. After a 7-2 start to his career, he went 21-49 over eight seasons.

Hal Smith, catcher for the 1960-61 Pirates. Smith came to the Pirates in a trade with the Kansas City A’s. He had a decent bat, but defensively he had his problems. He led the league in errors, passed balls and stolen bases allowed in 1957 alone. With the Pirates, Smith hit .264 with 14 homers and 71 RBIs in 144 games. In the 1960 World Series, he went 3-for-8, including the three-run homer he hit in the eighth inning of game seven, helping to set up Bill Mazeroski’s famous home run. Smith was lost to the Houston Colt. 45’s in the 1961 expansion draft. In ten seasons, he hit .267 with 58 homers and 323 RBIs.

Vinnie Smith, catcher for the 1941 and 1946 Pirates. He was one of many players from that era who had his career cut short due to service during WWII. Smith also missed significant time when he returned due to injuries. His big league career consisted of his two seasons with the Pirates. He played 16 games total in Pittsburgh, hitting .259 with five RBIs. Smith went on to become an MLB umpire after his playing days ended in 1953 and he was part of a famous game in Pirates history. He was the home plate umpire during Harvey Haddix’s 12-inning perfect game.

Johnny Gee, pitcher for the Pirates in 1939, 1941 and 1943-44. At 6’9″, he was the tallest player in Major League history until Randy Johnson came along. Gee spent three seasons in the minors with Syracuse, winning 20 games in 1939, before the Pirates purchased his contract. He played just three games in the majors that first year, going 1-2, 4.12, including his debut of eight innings and seven unearned runs. He missed the entire 1940 season with arm pain and barely pitched in 1941 and 1942, getting into a combined seven minor league and three big league games. Gee missed the first two months of the 1943 season as well, but ended up pitching a career high 15 games, going 4-4, 4.28 in 82 innings. He pitched poorly for the Pirates in May of 1944, posting a 7.15 ERA in four games before they sold him to the New York Giants, where he went 2-4 in 19 games over three seasons

Tony Piet, second baseman for the 1931-33 Pirates. In 305 games for the Pirates, Piet hit .298 with 151 RBIs and 41 stolen bases. After leaving Pittsburgh, his numbers fell off dramatically, finishing with a .277 average five years later. He also spent time in the majors with the Reds, White Sox and Tigers. Piet split his time between second base and third base after leaving Pittsburgh. In 1932, he led the league with 154 games played.

Bobby Schang, catcher for the 1914-15 Pirates. He wasn’t much of a hitter during his time in Pittsburgh, batting .194 with five RBIs over 67 games. Schang spent most of his 16-year pro career in the minors. He had a long stretch between major appearances that is worth noting. The Pirates sold him to the New York Giants near the end of the 1915 season. After appearing in a few games for the Giants that season, he went to the minors and didn’t return to the big leagues until a three game stint with the 1927 Cardinals. His brother Wally Schang was a catcher for 19 seasons in the majors