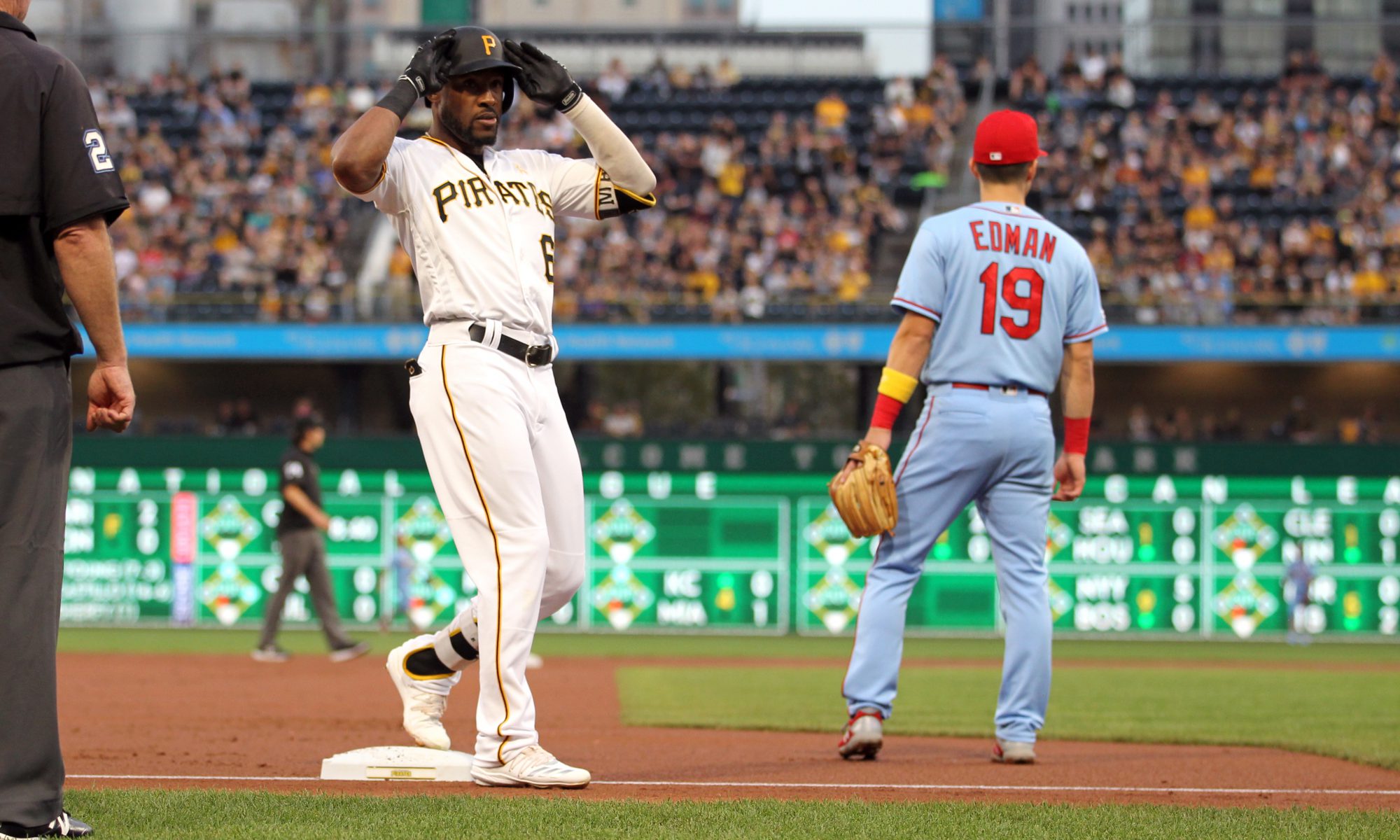 Starling Marte for Brandon Nimmo is a weird base for a trade.

When you think about that, why would either team make the deal if they’re each thinking they are trading the more valuable player?

On the Mets side, a lot of the arguments in favor of Nimmo are deeply flawed. They point out his WAR/600 plate appearances, even though Nimmo only has one season with more than 254 plate appearances. They point out where he’s had better offensive numbers than Marte, ignoring Marte’s value on defense and on the bases, plus Marte’s positional value.

The biggest flaw in the argument is this: Why would the Mets try to trade for Starling Marte if Brandon Nimmo is better?

Nimmo has upside. He’s got plenty of question marks surrounding his health. The arguments that Mets fans have made are correct in a way. Nimmo has been good when healthy, specifically on offense. He’s had a .340+ wOBA and a 114+ wRC+ in each of his last three seasons.

Nimmo had what appears to be an outlier season in 2018. It’s either an outlier in production, health, or both. This doesn’t mean he can’t repeat that going forward. It just means you don’t want to bank on his best season, when there’s no other evidence to back up the case that the 2018 version was the real Nimmo.

You can easily make an argument that the 2018-19 Marte was the real deal. He’s been a 3+ WAR player most of his career. He might even go back to 4+ WAR if he moved back to left field, which is key in comparing them both, as Nimmo is mostly a corner outfielder (where he’s still not great defensively). The Mets just added a strong defensive center fielder in Jake Marisnick, so they could use Marte elsewhere, getting more value from him.

So here’s the comparison:

On one side you’ve got a 3+ WAR player under a very affordable deal for his production. He’s largely been consistent, outside of his 2017 season. Getting back on track in 2018 and 2019 erases the concerns of that season. And there’s a chance you could get 4+ WAR value if you move Marte to left field, where his defense has more value.

On the other side you’ve got an injury prone player with a good bat. In his best season at the plate and with health, he was a 4.5 WAR player. He was a 1.2-1.3 WAR player in the two surrounding years. You’d take him hoping for the 4.5 WAR upside, which again comes when he’s cheap, during his three arbitration years.

If you’re taking Nimmo banking on that 4.5 WAR upside, you’re taking on a lot of risk. You put too much stock in his best season, and dismiss the health and production concerns.

This is why Marte for Nimmo+ is the only scenario that makes sense. The Mets are trying to win in 2020, so a more consistent guy like Marte is more valuable to them. The Pirates are unlikely to win in 2020 or 2021, so Marte has no value to them, and they are better off going for upside.

Nimmo has upside. If you can get him healthy for a full season, and get him back to his 2018 offensive production, he’s as good as Marte ever has been. Since that’s not a guarantee, you’d want more than just Nimmo if you’re trading Marte.

I am on a massive Chris Cornell kick lately. My favorite band is The Killers, and I’ve got Kings of Leon, Panic! at the Disco, Portugal. The Man, and Muse in the top five. But if you were to combine everything Chris Cornell ever did, he’d be number one on the list. The man could sing a list of minor league transactions and it would have sounded amazing.

I had a chance to see him live a week before he died, but wasn’t able to make it. I was in Indianapolis, working up in the press box after a game, and nursing a massive migraine. I heard music coming from a park near the stadium, so I stopped my article.

The music sounded familiar. It sounded amazing. It was just warm-ups and sound checks, and even that sounded great. I checked it out and saw it was Soundgarden. I had to go. Unfortunately, that migraine wouldn’t allow it.

It was crushing when he died, especially just missing a chance to see him live. I kind of wish I had discovered weed for my migraines at that point, for more reasons than one in this case.

After that happened, I saved a bunch of songs that I either had never listened to, or that I hadn’t listened to most of my life. Consider it the 2Pac approach of always discovering new music years after an artist died.

I’ve been listening to Songbook this week, and it is absolutely amazing. I miss Chris Cornell.

Seven former Pittsburgh Pirates born on this date and one of those players was part of two big trades made on December 13th.

On this date in 1996, the Pirates and Royals hooked up for a six-player trade that involved four Jeff’s and all six players first name started with the letter J. The Pirates sent shortstop Jay Bell and third baseman Jeff King in exchange for third baseman Joe Randa and pitchers Jeff Granger, Jeff Martin and Jeff Wallace. One year after the trade, only Wallace was still with the Pirates. King had two good years with the Royals, combining for 52 homers and 205 RBIs between the 1997-98 seasons, but he retired abruptly after just 21 games in the 1999 season, citing lost passion and a recurring back problem as the reason.

On this date in 2001 the Pittsburgh Pirates traded starting pitcher Todd Ritchie and minor leaguer Lee Evans to the Chicago White Sox in exchange for pitchers Josh Fogg, Kip Wells and Sean Lowe. The White Sox got one very poor season out of Ritchie and Evans didn’t make the majors. The Pirates cleaned up on the deal, with Fogg lasting four seasons, Wells pitching five, and Lowe canceling out Ritchie with a rough 2002 season before he was released.

Dale Berra, infielder for the Pirates from 1977 to 1984. He is the son of Hall of Fame catcher Yogi Berra. Dale was a first round draft pick of the Pirates in 1975. He earned a late season promotion in 1977 and hit .175 in 17 games. He bounced between the majors and minors the next two seasons, hitting .209 with nine homers in 100 combined games at the big league level. He finally spent the entire season in the majors in 1980, splitting his time between third base and shortstop. In 93 games he hit .220 with 31 RBIs. In 1981, he got time in at second base as well as the other spots, playing at least 18 games at each position. He hit .241 with a career high 11 stolen bases during that strike shortened season. Berra became the team’s regular shortstop starting in 1982 and continuing through the 1984 season. That first year he set career highs in nearly every category, hitting .263 with 10 homers, 61 RBIs and 63 runs scored. In 1983 he played a career high 161 games. In 1984 his average dropped to .222 and following the season the Pirates traded him to the Yankees. In 744 games with the Pirates he hit .238 with 255 RBIs. He made exactly 30 errors in each of his three full seasons at shortstop in Pittsburgh.

Jeff Robinson, pitcher for the Pirates from 1987-89. The Pirates got Robinson from the Giants in exchange for pitcher Rick Reuschel. He was 19-26, 3.81 in 169 games (34 starts) with the Giants. After the trade, he pitched out of the pen for the Pirates and went 2-1, 3.04 in 18 games. The following year he was used often, pitching 75 games and 124.2 innings, all in relief, going 11-5, 3.03 with nine saves. The Pirates used Robinson out of the pen again to start the 1989 season but by late June they moved him to a starting role, where he went 4-7 in 18 starts. After the season he was traded to the Yankees in exchange for catcher Don Slaught.

Dave Hamilton, pitcher for the 1978 Pirates. Hamilton wasn’t with the Pirates long. He was purchased from the Cardinals in late May of 1978 and was a free agent at the end of the season. He pitched 16 games out of the bullpen for Pittsburgh, going 0-2, 3.42 in 26.1 innings. He began his big league career as a starter for the Oakland A’s in 1972, going 19-14 over his first three seasons. He moved on to the Chicago White Sox during the 1975 season, then on to the Cardinals three years later. Hamilton finished his nine-year career back in Oakland in 1980. He had a 39-41, 3.85 record in 301 games, 57 as a starter.

Joe Christopher, outfielder for the Pirates from 1959 to 1961. He was signed by the Pirates as a 19-year-old prior to the 1955 season and he hit .329 in 140 games that year in the minors, playing for three different teams. He worked his way through the system, making his debut for Pittsburgh in late May of 1959. He played 15 games that season and went 0-12 at the plate. He was used sparingly the next season, playing 50 games but getting just 61 plate appearances. Interestingly, he started ten games and the Pirates won all of them. In the 1960 World Series he pinch-ran twice and was used as a pinch-hitter in another game, scoring two runs and getting hit by a pitch. In 1961 he was used more often, getting into 76 games, 44 as a starter. He hit .263 with 14 RBIs and 25 runs scored. Following the season he was selected by the New York Mets in the expansion draft.

Bill Windle, first baseman for the 1928-29 Pirates. His big league career lasted one calendar year, making his debut on September 27,1928 and playing his last game exactly one year later. In between, he only played one other game. Windle got two at-bats during his career, hitting a double in his first plate appearance and striking out in his last. His only hit came off Lou Koupal, who was a member of the 1925 World Champion Pirates team. Koupal was making his first start since leaving the Pirates after the 1926 season. Windle played minor league ball until 1933 and later managed in the minors.

William “Buckshot” May, pitcher for the Pirates on May 9, 1924. The Pirates bought him out of the minors in December of 1923 after he went 18-15 in 51 games for Seattle of the Western League. In the 22nd game of the 1924 season the Pirates took on the Boston Braves at Forbes Field. With the team down 10-6 going into the 9th inning, and having already used four pitchers, Hall of Fame manager Bill McKechnie called on May to make his major league debut. He allowed two hits, but threw a shutout frame, striking out fellow pitcher Joe Genewich to end the inning. Buckshot returned to the minors where he pitched until 1935. In 13 minor league seasons he went 178-136 in 490 games. The Pirates traded him to Oklahoma City of the Western League at the end of the 1924 season.