First Pitch: Steven Brault Wasn’t the Only Two-Way Player the Pirates Were Considering 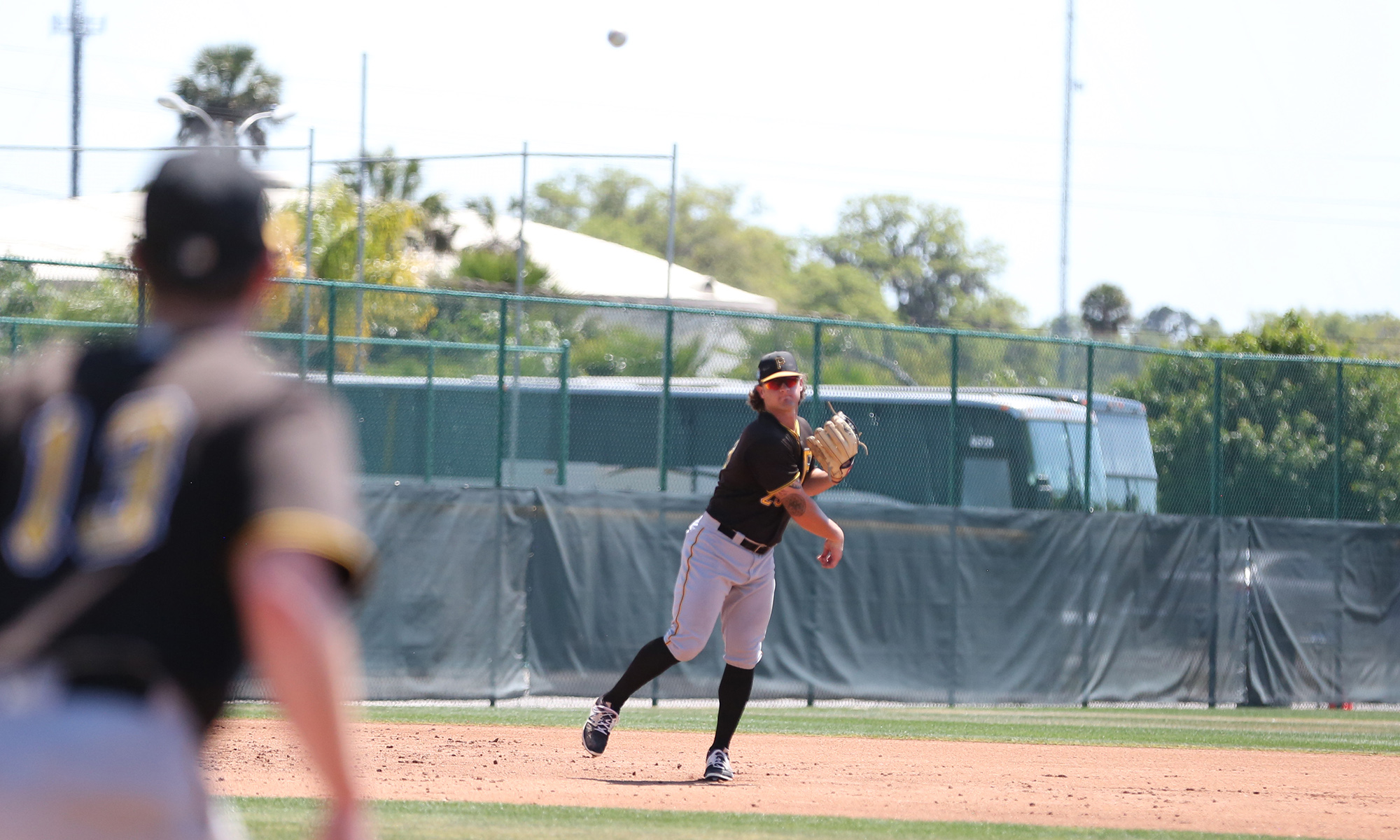 The Pirates lost Jerrick Suiter last week in the minor league phase of the Rule 5 draft. That means Suiter is gone, as teams typically use those picks for minor league depth, or to take a flier on a long-shot to make the majors.

I didn’t view Suiter as a big loss for the Pirates. He doesn’t have the power to play first base, and doesn’t have the defense for a corner outfield spot. Apparently, the Cubs don’t see him as a hitter either, since they reportedly took him to be a pitcher.

This isn’t a move that comes totally out of right field. The Pirates told Suiter they were open to using him as a two-way player. He pitched in Australia this winter, and opened some eyes, according to this article after the Rule 5 draft.

I’m not going to break down Suiter’s chances, as I’ve yet to see him pitch. A lot of players, when they start to max out in the upper levels of the minors as a hitter, will switch to the mound. But the idea of Suiter as a two-way player is interesting.

This idea was presented to Suiter by the old front office. The same front office discussed using Steven Brault as a two-way player. We don’t know what other discussions they had with other players, but they have plenty of options available to test this practice out on.

But this idea was presented by the old front office. It’s a significant change in strategy for them, as they never tried a two-way player. They had plenty of chances, most notably with Stetson Allie. They used Allie on both sides, but never at the same time.

Being open to two-way players seems like a good practice, as it gives additional avenues for an athletic, talented player to reach the majors. It’s a bit of a surprise that a front office known for moving infielders to the outfield would have never tried this.

Now the question is whether the new front office will try this approach. Brault has already been campaigning for that plan to stay in place.

Do you think we will see two-way players in the Pirates’ system in 2020?

Seven former Pittsburgh Pirates born on this date, starting with the most recent first

Mike Fetters, pitcher for the Pittsburgh Pirates in 2001-02. Fetters was in his 13th season in the majors when the Pirates acquired him from the Dodgers along with Adrian Burnside in exchange for Terry Mulholland on July 31, 2001. He finished the year going 1-1, 4.58 in 17.2 innings over 20 games with the Pirates, recording eight saves. In 2002 Fetters went 1-0, 3.26 in 32 games before the Pirates traded him to the Diamondbacks in early July for reliever Duaner Sanchez. Fetters pitched 620 games over 16 major league seasons, saving exactly 100 games in his career.

Jose Silva, pitcher for the 1997-2001 Pirates. Silva came to the Pirates in a nine-player deal with the Toronto Blue Jays in November of 1996. His big league experience at the time consisted of two relief outings for Toronto. For the Pirates, Silva spent five seasons in Pittsburgh, making 53 starts and 87 relief appearances. He had a 24-28, 5.44 record in 402 innings. In 1998, he went 6-7, 4.40 in 18 starts, posting his lowest season ERA. Two years later, he went 11-9 in 19 starts and 32 relief appearances, though he amassed that record while posting a 5.56 ERA. After the 2001 season, the Pirates traded Silva to the Cincinnati Reds for minor league pitcher Ben Shaffar. Silva played one season for the Reds, his last year in the majors. He has played in the minors and Mexico until 2012.

Tommy O’Brien, outfielder for the Pirates from 1943-45. He had spent three seasons in the minors when the Pirates acquired him prior to the start of the 1943 season. He played 89 games that rookie season, hitting .310 with 26 RBIs. The following year O’Brien got into 85 games but received just 178 plate appearances, in which he hit .250 with 21 walks. In 1945, he hit .335 in 58 games, but missed most of both June and July. He spent the entire 1946 season in the minors, then was sold to the St Louis Cardinals following the season. He next played in the majors in 1949 for the Red Sox, getting into 61 games between the 1949-50 seasons, before finishing his career in the minors in 1955.

Lou Koupal, a pitcher for the World Series winning 1925 Pirates team. The Pirates paid $40,000 for Koupal before the start of the 1925 season. That was a large sum for the day, but he had just posted a 22-10 record for Omaha of the Western League. He was used sparingly the first two months of his Major League career, getting into six games, all in relief. He pitched a total of nine innings, giving up 14 hits, seven walks and he failed to record a strikeout. He finished the 1925 season in the minors, then began the 1926 season there as well. After going 13-5 for Buffalo of the International League, the Pirates brought him back to the majors in September of that year. He went 0-2, 3.20 in six games, in what would be his last year with the Pirates. He had a career record of 10-21, 5.58 in six major league seasons. Koupal won 175 minor league games, playing until the age of 42.

Eddie Yount, pinch-hitter for the 1939 Pirates. Yount didn’t get much of a chance with the Pirates, striking out as a pinch-hitter in consecutive games. He spent the 1939 season with Portsmouth of the Piedmont League, where he hit .350 with 27 doubles, 11 triples and 11 homers in 137 games. His only other Major League experience came with the 1937 Philadelphia A’s, and that was just four games. The interesting part about that fact is that when Yount joined the Pirates, the local paper thought it was his Major League debut. He was also referred to as Floyd Yount, which is his given name, though most baseball sources call him Eddie. Yount played 12 years in the minors, retiring after the 1952 season. He missed three years during WWII. He was a .302 hitter in the minors.

Ray Poat, pitcher for the 1949 Pirates. Poat came to the Pirates in a mid-season trade with the New York Giants that sent Bobby Rhawn to Pittsburgh and Kirby Higbe the other way. Poat had only been used twice in the first two months of the season by the Giants and he got hit hard each time. With the Pirates, he also saw limited time, getting two starts and nine relief appearances. He was 0-1, 6.25 in 36 innings. That would end up being his last season in the majors. He played one more year in the minors before retiring. Poat pitched a total of six years in the majors, going 22-30, 4.55 in exactly 400 innings. He picked up half of his career wins during the 1948 season.

Art Butler, infielder for the 1912-13 Pirates. The Pirates acquired him in August 1912 in a trade for infielder Bill McKechnie, the future Hall of Fame manager who had spent parts of four seasons in a Pittsburgh uniform. Prior to the trade, Butler’s major league experience consisted of just 26 games with the Boston Rustlers (Braves) in 1911. He was the Pirates everyday second baseman after the trade, playing 43 games in which he hit .273 with 17 RBIs. For the 1913 season, Art backed up at both second base and shortstop, getting into 82 games, while hitting .280 with 40 runs scored. Following the season, he was part of a regrettable eight-player trade with the St Louis Cardinals that also included Dots Miller and Chief Wilson.