Pirates Prospects took the leap to being my full-time job at the end of the 2010 season, all thanks to the release of our first version of the Prospect Guide. The original book was designed to serve as a reference and a guide throughout the season, giving information on every prospect in the system.

While writing that first book, I didn’t imagine there would be nine more to follow. Yet here we are, with the 10th anniversary edition of the Prospect Guide, which is now available. 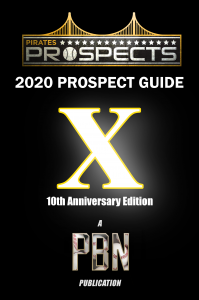 The 2020 Prospect Guide currently includes our initial top 50 prospects, along with an exclusive article to the book, and other great resources. The book is in eBook form, which allows us to provide updates throughout the year. Your single purchase of the Prospect Guide will get you every single update for the book, including the final version with information on every player in the system.

It’s only fitting that this anniversary comes as Pirates Prospects takes the next steps in its growth. This book marks the start of that next step.

Every book to this point has been written by me, with help from John Dreker, Wilbur Miller, and other writers along the way. This year’s book was written by John and Wilbur, while I handled the editing and formatting.

That will begin this offseason with upgrades to Pirates Prospects, as well as upgrades to this book. If you’ve purchased the book before, you’ll notice the design and contents look familiar. By the start of the season, the book will see some upgrades to include more scouting and analytical information, and an upgraded look.

We’ve also had articles in the book in the past. This year we’ll be expanding on that, including at least three exclusive articles to the book. The first article is in this initial release, with John Dreker looking ahead to the very talented 2020 Greensboro rotation, and how that group could make up the future of the Pirates’ rotation. Wilbur Miller and I will have articles on the system in future releases.

You can purchase the 2020 Prospect Guide and all of its future updates in our store.