First Pitch: 20 Players and Situations to Watch For the Pirates in 2020 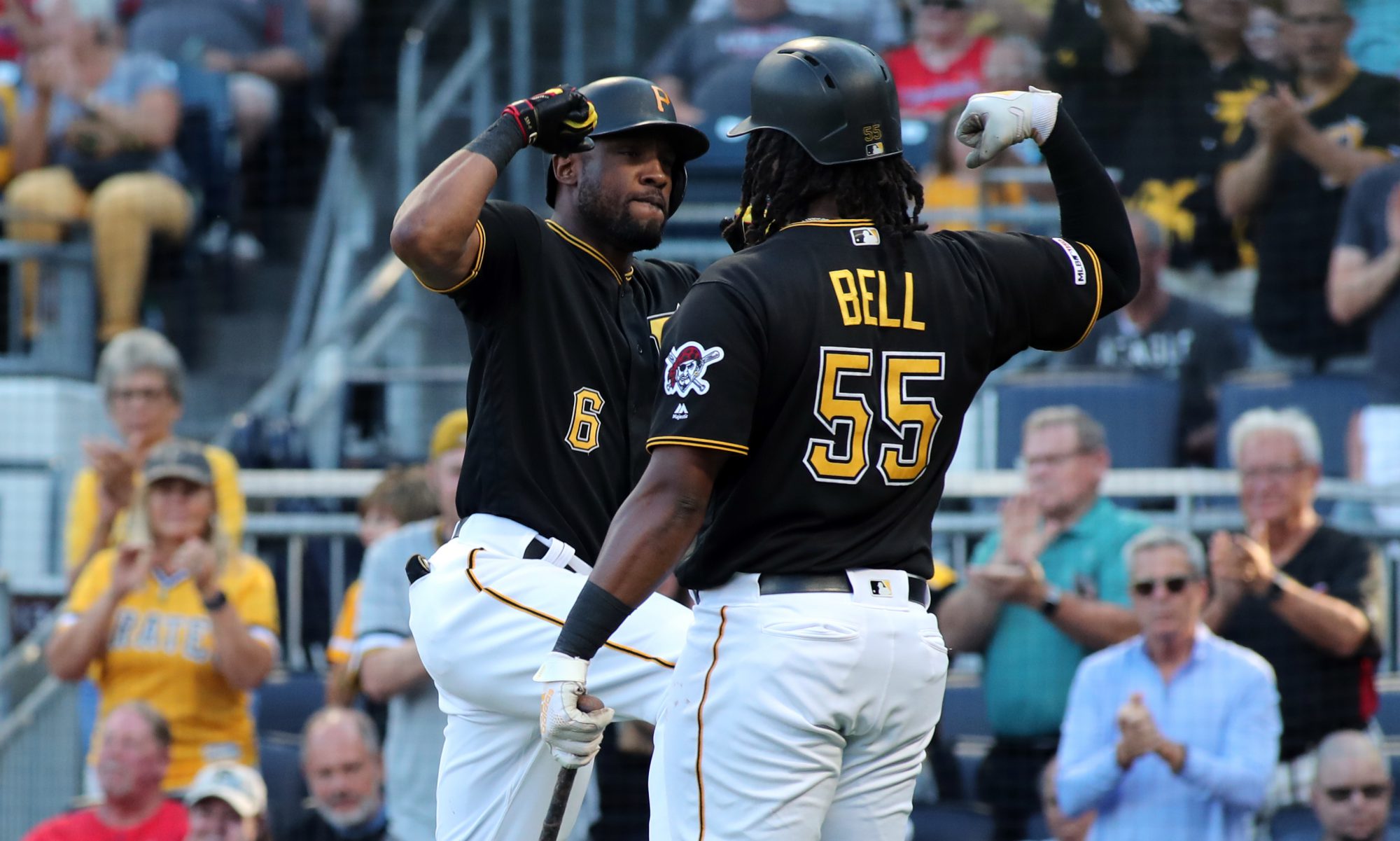 The theme changed each year, depending on whether I saw the Pirates as contenders, possible contenders, or a team in need of a rebuild or clear direction. Each year the challenge has been finding enough players to discuss under one theme. That only got more difficult this year going from 19 to 20. There’s only a 26 man roster.

This year I did things a bit different. Rather than 20 players fitting one theme, I went with four groups of five players. The group themes are MLB trade candidates, positions that need to be upgraded over, young players to watch in the majors in 2020, and prospects to watch in the minors.

The Pirates aren’t revealing any part of their plans for 2020 and beyond, but these four categories should cover the key things that I feel they need to address in the next year.

Also, since we’re now officially in the year 2020, we’re even closer to the launch of Pittsburgh Baseball Network. I hope to have some key updates for you in the next week.

Five Players the Pirates Should Consider Trading in 2020

1. Starling Marte, CF – I didn’t really focus on putting these in a priority 1-5 order, but Marte is definitely at the top of the list here. He’s got the most present day trade value, and would fetch the biggest return of anyone on the team right now. The Pirates shouldn’t be in a rush to trade him, since he’s under control for two more seasons.

2. Adam Frazier, 2B – He’s the other guy who would have value this offseason. I don’t think Frazier is the future at second base for the Pirates. That’s not to say he won’t start at second base again. But he’s 28, with three years of control remaining, and a lot of top middle infield prospects behind him. He’d be a nice luxury as a super utility guy, but the Pirates would get more value trading him now and fueling their future seasons.

3. Josh Bell, 1B – I’m not sure what Bell’s trade value is right now. I’m also a believer that he’s got more value we haven’t seen. I might be wrong on that. However, he’s a guy who has three years of control remaining, and the Pirates should be in no rush to trade him until they see who their replacement is (Will Craig? Mason Martin?) and until they see if they can get more value out of him.

4. Chris Archer, RHP – Archer has no value right now, and would need a good 2020 season to rebuild that value. If this happens, the Pirates should trade him to try and reclaim any kind of value they can from the deal. I’m saying that as a person who thinks Archer could bounce back, but who doesn’t believe the Pirates will win with Archer in 2020 or 2021.

5. Free Agents – I was going to list someone like Joe Musgrove here, with the idea that he might not have a lot of trade value right now, but could increase that in 2020. Instead, I think the Pirates should add some veteran free agents at key spots (outfield, rotation, bullpen, catcher, third base), and flip them at the deadline for a better return than anyone else on the roster might bring.

1. Jacob Stallings, C – This is the catching position in general. I think Stallings is fine in a split role along with Luke Maile and anyone else they get (Four man catching staff!). It wouldn’t hurt to go with an upside option here, since I don’t think Stallings or Maile will emerge as long-term solutions.

2. Colin Moran, 3B – Ke’Bryan Hayes will be the eventual upgrade here, but the Pirates could use someone who can compete with Moran at the start of the season, and provide some insurance for Hayes.

3. Gregory Polanco, RF – I don’t think I’ll ever get off the Polanco hype wagon. I still think he’s got impact potential in him if he stays healthy, which is a big “if.”

4. Steven Brault, LHP – Not so much Brault specifically, but the back of the rotation. I like Brault as a long reliever and depth starter, but right now he’s elevated into a starting role if the Pirates don’t bring in anyone else.

5. Keone Kela, RHP – I’m guessing he’s the closer for 2020. His value is down, like Archer, and he needs to rebuild it. I’d like to see the Pirates abandon traditional bullpen roles, which means the focus would be on having good relievers in general, rather than good relievers who can pitch a specific inning in a very specific game situation. As for Kela, he’d also fit in the previous category as a guy who needs to rebuild trade value.

Five Key Young Players to Watch in the Majors in 2020

1. Mitch Keller, RHP – He’s the future leader of the Pirates rotation. Can he take a step toward that in 2020?

2. Ke’Bryan Hayes, 3B – The third baseman of the future with Gold Glove defense and the offensive skills to pair up and make him an All-Star.

4. Kevin Newman, SS – Same as Reynolds, except with the added question of whether he’d play second or short.

5. Cole Tucker, SS – If Frazier goes, Tucker and Newman could take over the middle infield spots. Tucker has more upside, but has shown less consistency throughout his career, and is now behind Newman after their 2019 seasons.

Five Prospects Who Are Key to the Future Beyond 2020

1. Oneil Cruz, SS? – He’s the most dynamic prospect I’ve covered since starting this site in 2009. I don’t think he’ll be ready for 2020, but perhaps mid-2021? Key questions: whether he can continue to offensively dominate the upper levels and which position will he play? He’s been at shortstop under the old front office. I think his most likely long-term position with the Pirates is right field.

2. Cody Bolton, RHP – Another guy who could arrive in 2021. He’d make a nice number three or four starter behind Mitch Keller and one or both of the following guys…

3. Tahnaj Thomas, RHP – Thomas had a breakout year in 2019, and emerged as our number 5 prospect in the 2020 Prospect Guide. He’s got the stuff to be a top of the rotation guy, with a fastball that sits upper 90s and hits triple-digits, improved control after a mechanical adjustment, and a slider that is starting to become a strikeout pitch.

4. Quinn Priester, RHP – The Pirates took him in the first round in 2019. He can already hit 97, and his curveball was rated as one of the best in the draft. He and Thomas will be the key pitching prospects to watch in the system for top of the rotation guys who could pair with Keller in the future.

5. Sammy Siani, CF – Siani is a placeholder for all of the outfield prospects in the lower levels. They need some of these guys to break out, as their outfield is pretty thin without Starling Marte. Though a Reynolds/Cruz combo would be a nice start.

Three former Pittsburgh Pirates born on this date, plus a manager with an interesting footnote.

Hank Greenberg, Hall of Fame first baseman for the 1947 Pirates. He missed nearly five seasons due to World War II but the 36-year-old Greenberg still led the American League with 44 homers and 127 RBIs his first full season back in baseball in 1946. The Pirates purchased him from the Detroit Tigers for $75,000 in January of 1947 and then signed him to a $100,000 contract, the first NL player to make six figures in a season. The addition of Greenberg gave the Pirates a potent 1-2 punch in the middle of their lineup when combined with Ralph Kiner, who was the NL leader in homers in 1946. The Pirates adjusted the left field fence at Forbes Field to accommodate their two sluggers, bringing it in 30 feet and calling the new home run territory Greenberg Gardens, later renamed Kiner’s Korner. Greenberg didn’t have a big season in Pittsburgh, hitting a career low .249 with 25 homers and 74 RBIs, although he did walk 104 times. His biggest contribution to the Pirates that year was his tutelage of Kiner, making the young player a better hitter by teaching him to pull the ball more to take advantage of the shorter distance in LF, and he also made him take extra batting practice. The move may not have paid off in the standings as the Pirates finished in 7th place with a 62-92 record, but they did get their money back on Greenberg with an increase of over 500,000 fans from the previous season.

Greenberg retired following the season due to lingering injuries, but he still had some remarkable career stats to his credit. He played just nine full seasons and four partial years but he was still able to hit 331 homers and drive in 1,276 runs with a .313 career average. His career OPS of 1.017 ranks seventh all-time. He led the AL four times in home runs including an amazing 58 in 1938. He drove in 183 runs in 1937, the third highest single season total ever. Two years prior he drove in 170 runs, the eighth highest total ever. Despite the great stats over a short time it still took until 1956 for him to get elected to the Hall of Fame, even though he first appeared on the ballot in 1949 (He also received votes in 1945 before he came back from the war).

Bob Owchinko, pitcher for the 1983 Pirates. They originally acquired him in December 1980 from the Cleveland Indians in the Bert Blyleven/ Manny Sanguillen trade. Before Owchinko could play a regular season game for the Pirates, they shipped him to the Oakland A’s in exchange for pitcher Ernie Camacho. He was released by the A’s just prior to the start of the 1983 season and the Pirates signed him one month later. He spent the season in Triple-A, getting called up in September. On September 5th he came in during the ninth inning of the second game of a doubleheader with the Pirates up 6-5 and gave up a home run to the first batter he faced, Andy Van Slyke. The next batter doubled, then Owchinko was pulled and he didn’t pitch for the Pirates again. In November of 1983, the Pirates sold him to the Reds.

Bill McGunnigle, manager the Pirates during the second half of the 1891 season, going 24-33 with two ties. He had previously managed the Brooklyn Bridegrooms from 1888-90, winning the American Association pennant in 1889, then when Brooklyn moved to the NL for the 1890 season, he won a second consecutive title. Despite that success, he had just two more seasons of managing left in him. His first was in 1891 with the Pirates and then 1896 with the Louisville Colonels. McGunnigle pitched two seasons in the majors (1879-80) and played outfield when he wasn’t on the mound, also getting into one major league game in 1882. He has an interesting footnote in Pirates history that not many people know.

During the 1891 season, most sources say that the Pirates switched names from the Alleghenys to the current Pirates name. That isn’t quite true, as there was never any official name change back then and “Alleghenys” was still used over the next few years. It’s true that 1891 was the first time that the club was called “Pirates”, but that was far from official and mostly done by a few outside sources, such as the press in Cincinnati and Boston, and some unhappy baseball people in Philadelphia. The team name from the local press never really changed until Pirates was fully embraced in 1895. They were still called the Alleghenys in early 1891, sometimes referred to as the Pittsburgs or the Hanlon’s after manager Ned Hanlon. That changed when McGunnigle took over. He used to run practices with a whistle and the team was quickly referred to as the “Pets”, as in McGunnigle’s pets. It was used in headlines and stories by the Pittsburgh media for the second half of the season and into the off-season.