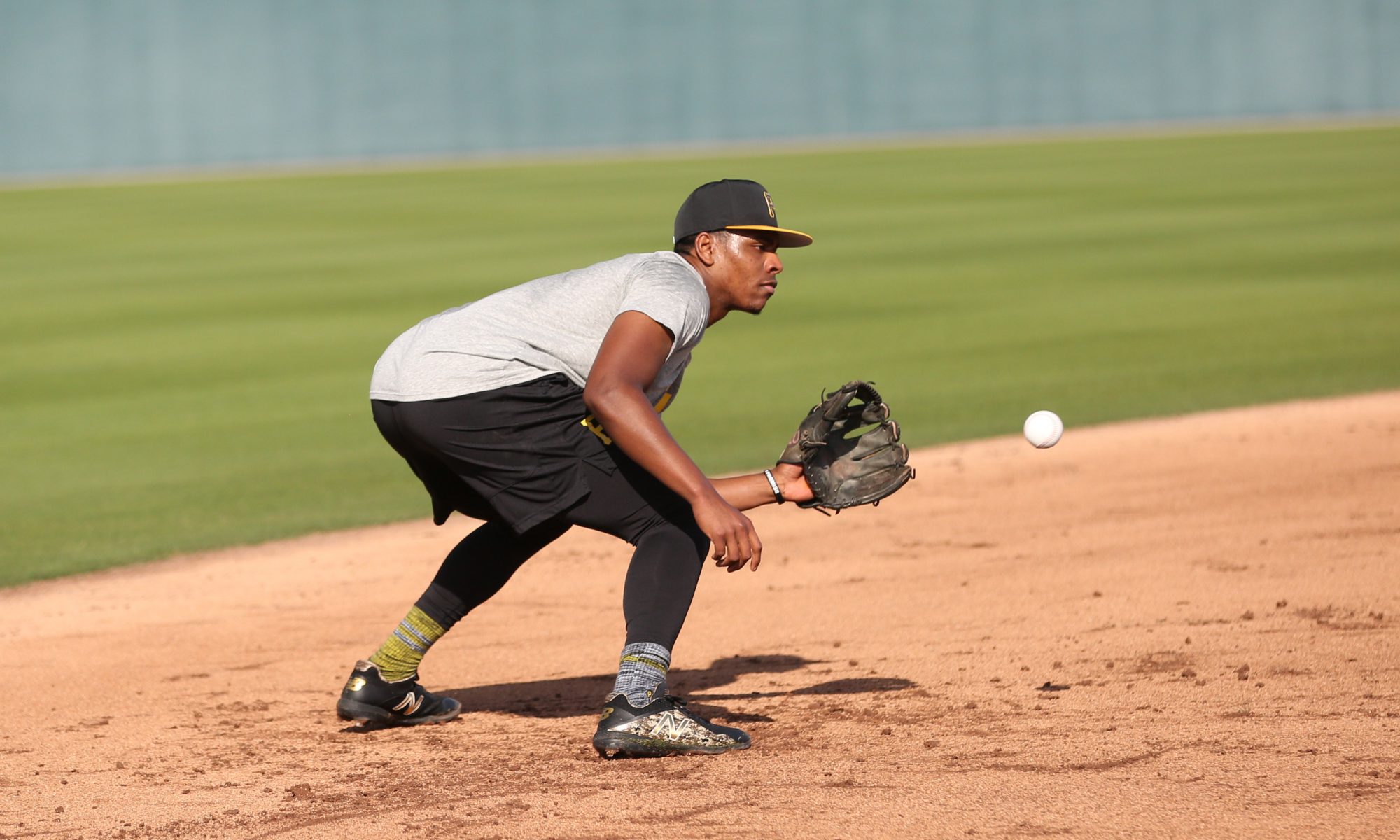 Today is a notes article, starting with some high praise for 22-year-old third baseman Ke’Bryan Hayes. MLB Pipeline sent a survey to general managers, executives and scouting directors for all 30 MLB teams and asked them about the best prospects in the game. One of the nine categories was the best defensive prospect in all of the minors. Ke’Bryan Hayes finished second in the combined voting.

Hayes was a distant second to outfielder Cristian Pache of the Atlanta Braves, but he ranked as the best defensive infielder, getting 12% of the votes.

That shouldn’t be a surprise. Hayes has won three straight minor league Gold Glove awards and he has set league records for fielding in each of the last three seasons. Winning a minor league Gold Glove is a bit harder than an MLB one as far as odds. While MLB hands out two for the 30-team league, Minor Leagues Baseball has one for each position across all of the minors, regardless of level. Hayes was the only repeat winner from 2017 to 2018, then added a third this season.

** We had an article the other day for Baseball America’s new top 100 draft prospects list. In it we mentioned the two prep players from Pennsylvania, who could both go in the top ten picks. I didn’t know just how rare that is for the state until I saw this note yesterday from BA’s Carlos Collazo. Pennsylvania hasn’t had two prep players picked in the same first round since 1996.

Thanks to Austin Hendrick and Nick Bitsko, 2020 could be the first year since 1996 that we have two high school players from Pennsylvania go in the first round: https://t.co/xya1THYO4N #MLBDraft

That’s good news for the state, which is obviously home to many of our readers. Good news as long as you don’t look up who those two players were in 1996…I’ll tell you anyway. Matt White and Johnny Oliver, who played the exact amount of Major League games as I did, just one behind John Bormann.

** If you missed the news from yesterday, Hal Smith, catcher for the 1960-61 Pirates, passed away at age 89. He hit a three-run homer in the eighth inning of game seven of the 1960 World Series that gave the Pirates a 9-7 lead and helped set up Maz’s historic shot. Here’s the home run:

Hal Smith, who hit a three-run home run in game seven of the 1960 World Series for the Pittsburgh Pirates, has passed away at the age of 89: https://t.co/SPY9N9Fsve

** Just a reminder that we will have a live discussion during the MLB Network shows for the top center fielders and left fielders. Two one-hour shows, starting at 6:00 PM tonight. If you’re watching the show, stop by and chat. I’ll be watching and updating the article as they mention Bryan Reynolds and Starling Marte. The discussion article will be up around 5:30 PM to give some people a little reminder to tune in.

My dad was a drummer in a band for quite some time and a big fan of Neil Peart, who passed away yesterday. So this is for my dad, who better read this article…He’s also a New York Yankees fan (I know..I know) so I owe him one for torturing him with the Hal Smith video, which he probably won’t watch.

How well do you remember the 2017 Pirates team?


THIS DATE IN PIRATES HISTORY

Seven former Pittsburgh Pirates born on this date, including one of the best outfielders in franchise history.

Warren Morris, second baseman for the 1999-2001 Pirates. He was acquired from the Texas Rangers along with Todd Van Poppel in exchange for Esteban Loaiza in 1998. Morris hit .331 with 19 homers, 17 stolen bases and 103 RBIs at Double-A in 1998 to earn the Pirates starting second base job in 1999. He played 147 games his rookie season, hitting .288 with 15 homers, 73 RBIs and 65 runs scored, earning a third place finish in the NL Rookie of the Year voting. He had a sophomore slump in 2000, hitting .259 with only three homers and 43 RBIs, despite getting 25 more plate appearances than the previous season. He performed even worse in 2001 and spent nearly half the season in the minors. He hit .204 in 48 games that season, then was released during spring training in 2002.

Jermaine Allensworth, outfielder for the 1996-98 Pirates. He was a first round draft pick of the Pirates in 1993. He hit well that first season in short-season A-ball, batting .308 with 18 steals in 67 games. He was moved to Double-A the following season, but struggled with the big jump in levels. He hit better in 1995 and made it to Triple-A mid-season. Allensworth broke out in 1996 at Triple-A, hitting .330 with 25 steals and 77 runs scored in just 95 games, which earned him a promotion to the big leagues in late July. He hit .262 with 11 steals and 31 RBIs in 61 games for the Pirates that season. He started the 1997 season in the majors and was playing CF everyday until a broken hand in May cost him six weeks of the season. He would hit .255 in 108 games that year. The 1998 season saw him hit .309 through 69 games before the Pirates traded him to the Royals for minor league pitcher named Manuel Bernal. Allensworth would be shipped to the Mets before the season was over and he finished his MLB career there in 1999. He played pro ball until 2008.

Lloyd McClendon, utility player for the 1990-94 Pirates, then managed the team from 2001 until 2005. The Pirates acquired him late in the 1990 season from the Cubs for a player to be named later. It was his fourth season in the majors and he was hitting just .159 at the time of the trade. He was a part-time player, used as a corner outfielder, first baseman, pinch hitter and emergency catcher during his four full season with the Pirates. In 1991 he hit .288 with seven homers in 163 at-bats , pinch-hitting 40 times that season. He hit .253 during the 1992 regular season, but in the playoffs he went 8-for-11 with four walks and four RBIs. His average dropped the next two seasons before the Pirates allowed him to leave via free agency. He signed with the Indians organization and finished his playing career in Triple-A in 1995. McClendon had a 336-446 record during his managerial tenure with the Pirates, finishing as high as fourth place twice, topping out at 75 wins.

Mickey Keliher, first baseman for the 1911-12 Pirates, who was born on the same day as Max Carey. Keliher began his pro career in 1910 hitting .225 in 25 games. The following year he broke out for Petersburg of the Virginia League, hitting .323 in 122 games which earned him a September look with the Pirates. He did not make a great impression in his three games, going 0-for-7 with five strikeouts and he also made an error. The next season he was with the Pirates early, but the only playing time he received was two pinch-running appearances. He then spent a total of 16 seasons over an 18-year span playing in the minors, never getting another chance in the majors. He was a player-manager his last three seasons in the minors, hitting .313 in 1929, before passed away in 1930 at age 40.

Silver King, pitcher for the 1891 Pirates. King was a big-time signing for the Pirates, who had just finished 23-113 in 1890. With the Player’s League folding after the 1890 season, almost all of those players returned to their original team. King was one of the handful of players who didn’t, choosing to sign with the Pirates instead for a $5,000 contract. He was a star player, who by age 22 had already won 143 major league games. Pittsburgh did not get the kind of production from him they had hoped for. He had a 14-29 record, leading the NL in losses. They released him before the season ended. He won 22 games in 1892 for the Giants, but when the pitching distance was changed in 1893 to the current distance they still use today, King had a tough time adjusting, he was a sidearm pitcher with a lot of deception in his delivery. He would end up winning just 24 major league games after the age of 24.

Bill Niles, third baseman for the 1895 Pirates. He was a light hitting third baseman who started his minor league career in 1889 and bounced around the minors before getting his only shot in the majors at age 28. The Pirates used him in 11 games in 1895 and he hit .216 with five walks and two steals. Niles was used in May, then sent out to the minors. He was recalled by the Pirates on July 20th to take the place of the Billy Clingman at third base. Niles posted a .930 fielding percentage during his short time, which was 58 points above league average for third baseman at the time. He returned to the minors for good that August and played until 1900.