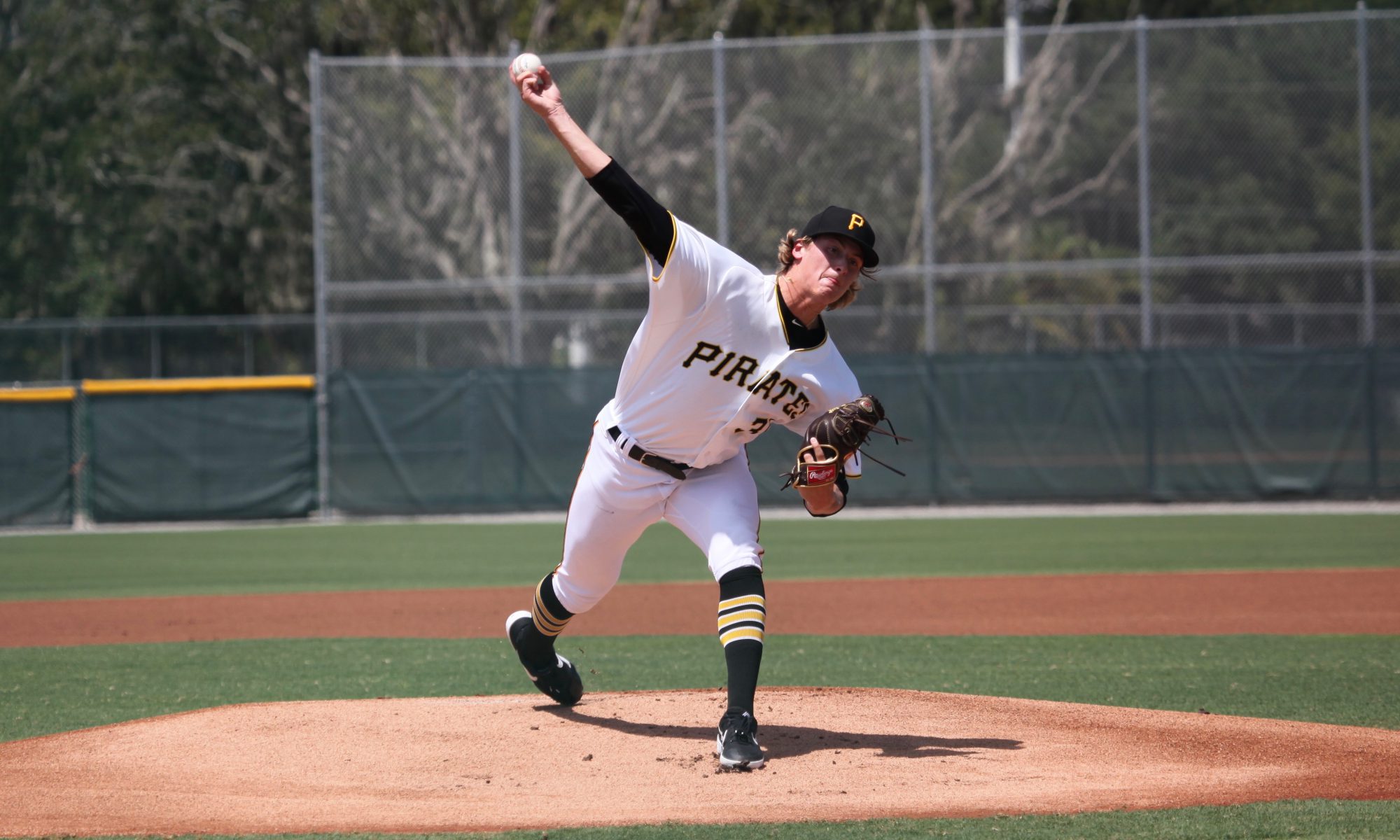 Happy Groundhog Day everyone. I’m writing this up on Saturday night, so by now you’ll know whether their will be six more weeks of winter, or if Spring Training will start on time. My guess is that the Pirates are eight days away from pitchers and catchers reporting, ten days away from the first workouts and exactly two weeks away from position players reporting.

The day after the Puppy Bowl serves as the official start of baseball for many people, so for now we just have some notes today, along with a Groundhog Day theme in the song/game section below. Enjoy your dual holiday Sunday.

** MLB Pipeline posted their list of the top prospects for each team outside of their top 100 prospects list. Quinn Priester was the choice for the Pirates, which means that they have him ranked fourth in the system. Their top 100 included Mitch Keller, Ke’Bryan Hayes and Oneil Cruz. Pipeline notes that Priester just missed the top 100 and could join it soon as players lose their prospect status in the majors, with Keller likely being one of the first players off the list, since he’s just 2.1 innings short.

** The Caribbean Series started yesterday and Colombia got an invite to the series when the team from Cuba couldn’t make it due to visa issues I believe. The series, which is being played in Puerto Rico, has six teams included. Colombia has the interest for the Pirates, with Francisco Acuna and Luis Escobar. For Acuna, this is well above anything he has faced before and he debuted with two hits, an RBI and a stolen base. He’s playing shortstop and batting lead-off for his squad.

** Baseball America named their preseason high school All-American team and rated the best tools in the draft class. Austin Hendrick, who plays just down the road from PNC Park at West Allegheny HS, was named to the first team. He was also named as being the second best pure hitter, having the best power and best outfield arm. He would be a big part of our draft coverage anyway just because he’s ranked seventh in the class and the Pirates pick seventh, but add in the local connection and you’ll be hearing his name a lot over the next four months. Our draft coverage begins in two weeks.

** We posted the Spring Training broadcast schedule for AT&T SportsNet yesterday. Be sure to bookmark. We will add the MLB Network schedule once that’s available.

** Part two of the Prospect Throwback article will be posted today. Yesterday, we took a look at the 1986 Prince William team.

Seven former Pittsburgh Pirates players born on this date starting with a member of the first team in franchise history to win the World Series.

Bill Abstein, first baseman for the 1906 and 1909 Pirates. He played three seasons in the minors before he made his big league debut with the 1906 Pirates in late September. Pittsburgh purchased his contract that season after he hit .311 in 127 games for Shreveport of the Southern Association. He batted .200 in eight games for the Pirates, then was assigned to the Providence Grays of the Eastern League for the 1907 season. He spent two full years there, hitting .276 with 31 triples over 281 games. The Pirates made him the everyday first baseman in 1909 and he would end up batting .260 with 70 RBIs in 137 games, helping Pittsburgh to its second World Series appearance. In the series against the Detroit Tigers, Abstein hit .231 with two RBIs and the Pirates took the series four games to three. Following the season, Abstein was put on waivers, where he was picked up by the St Louis Browns. He lasted just 25 games, hitting .149 before returning to the minors where he finished his baseball career in 1916.

Travis Snider, right fielder for the 2012-14 and 2015 Pirates. He joined the team during the middle of the 2012 season, coming over in a trade with the Toronto Blue Jays for Brad Lincoln. In 301 games with the Pirates over that time, he hit .243 with 19 homers and 72 RBIs in 711 at-bats. He was traded to the Baltimore Orioles in January 2015. Snider returned to the Pirates after being released by the Orioles in mid-August. In 18 games, he hit .192 with one home run. Snider has played in the minors since 2015.

Ronny Cedeno, shortstop for the Pirates from 2009 until 2011. He began his MLB career in 2005 and was struggling through the 2009 season with the Mariners, hitting just .167 in 59 games, when the Pirates acquired him in a seven-player deal at the trading deadline. Cedeno replaced Jack Wilson, who went to Seattle in the trade, as the everyday starting shortstop. In his 2+ seasons in Pittsburgh, he hit .254 with 15 homers and 91 RBIs in 313 games. He was granted free agency in October 2011 and signed with the New York Mets the following January. He last played in the majors in 2014, seeing time with four different teams over his final three years.

Pat Clements, pitcher for the Pirates during the 1985-86 seasons. He had started his Major League career in 1985 for the Angels, going 5-0, 3.34 in 41 relief appearances before the Pirates acquired him in a six-player deal in early August. Clements would go 0-2, 3.67 in 27 games for the Pirates to finish out the year. In 1986, he pitched 61 innings over 65 appearances and had a record of 0-4 with a 2.80 ERA. Following the season he was dealt to the Yankees in a six-player trade along with Cecilio Guante. The Pirates received Doug Drabek in that deal. Clements would pitch in the majors until 1992 and finish with a 17-11, 3.77 ERA in 288 games. He briefly pitched in the minors with the Orioles in 1993 before retiring.

Manny Sarmiento, pitcher for the Pirates during the 1982-83 seasons. He played parts of five seasons in the majors before the Pirates purchased his contract from the Red Sox after the 1981 season. His only full season in the majors prior to joining Pittsburgh was in 1978 when he went 9-7, 4.38 in 63 games for the Cincinnati Reds. He had spent the entire 1981 season in the minors where he posted a 2.34 ERA in 96 innings over 47 relief appearances in Triple-A. For the Pirates, he began the 1982 season in the minors, but was recalled after a month. Sarmiento was used out of the bullpen at first, then moved to the starting rotation in June and made a total of 17 starts that year. In his 35 appearances he went 9-4, 3.39 in 164.1 innings with four complete games. He was moved to a bullpen role for 1983 and in 84.1 innings he had a 3-5, 2.99 record. In his first inning of work during Spring Training in 1984, Sarmiento injured his elbow and missed the entire. He returned for one season of Triple-A in 1985 before retiring.

John Tudor, pitcher for the 1984 Pirates. He was in the majors with the Red Sox for five seasons before the Pirates acquired him in December of 1983 in exchange for Mike Easler. Tudor had won 13 games in each of his last two seasons with Boston. For the Pirates he went 12-11, 3.27 in 32 starts, throwing a total of 212 innings. Almost a year to the day the Pirates traded for him, they dealt him to the Cardinals in a four-player deal that got them George Hendrick, who would later be used in the deal to get Clements mentioned above. Tudor would have a career year in 1985 leading St Louis to the World Series with 21 wins and ten shutouts. He never won more than 13 games in any of his other 11 seasons in the majors and threw just six other shutouts in his entire career.

Fred Waters, pitcher for the Pirates during the 1955-56 seasons. He was originally signed by the Brooklyn Dodgers in 1949 as an amateur free agent, then moved on to the Braves early in 1953, before the Pirates traded for him later that year. He was one of six players, plus cash, that the Pirates received in return for second baseman Danny O’Connell. Waters had won 18 games his first season in the minors but never approached that win total in any of the six seasons since when the Pirates called him up in mid-September 1955. He pitched two games in relief, allowing two runs in five innings. He began the 1956 season back in the minors before being called up for a July 14th doubleheader in which he pitched in both games. He would go on to pitch 23 games, five as a starter and finish with a 2-2, 2.82 record. He then returned to the minors for five more seasons before retiring as a player. Waters managed for 21 years in the Twins farm system.

The MLB is a professional sport. Used to be the…

Moving the draft to such a late date is doing…

I don't care if Maggi gets an at bat or…

Agree. It was weird to have draft picks signing and…

I was at least hoping one of the other contributors…