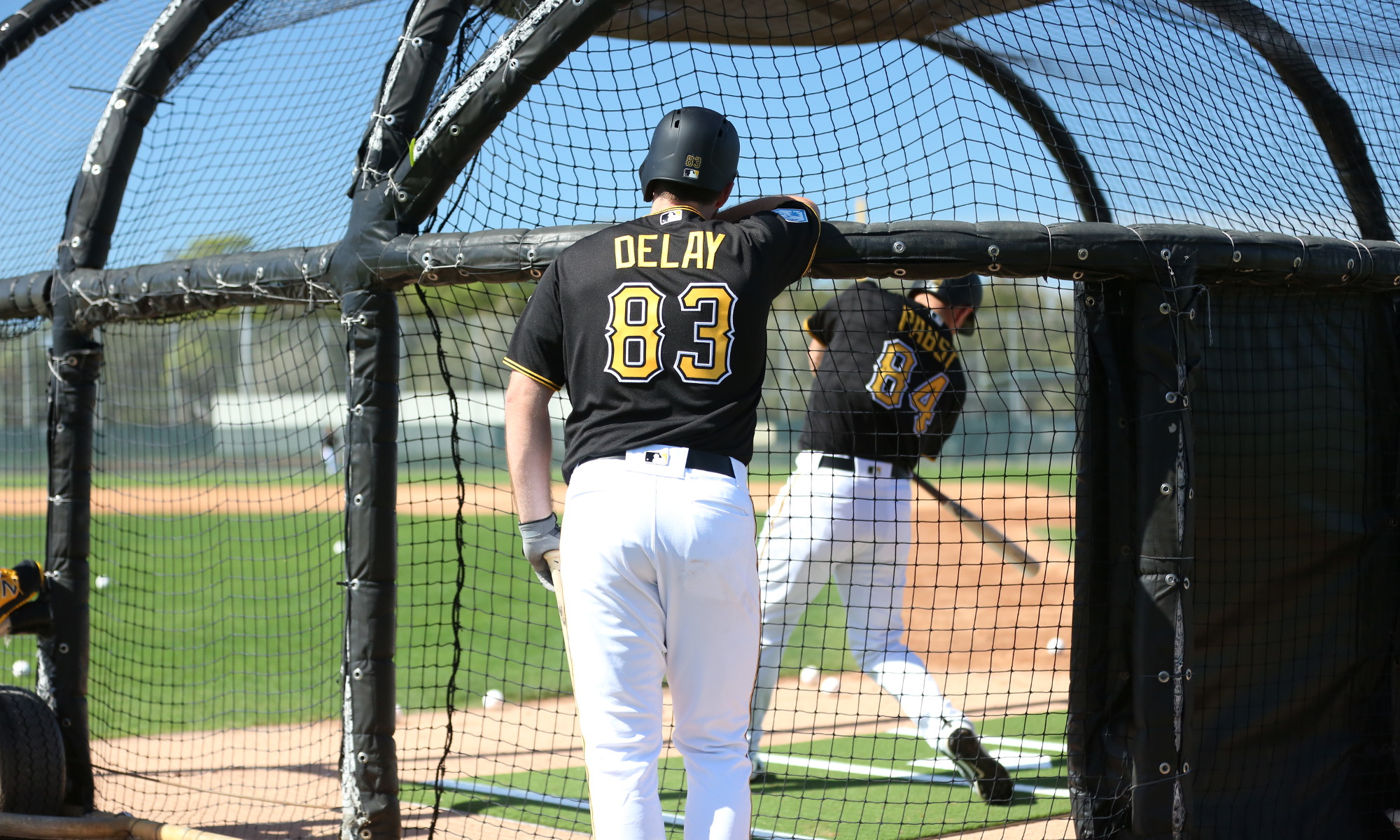 Yesterday, we took a look at an area of weakness for the Pittsburgh Pirates. They have just two left-handed pitchers among their top 50 prospects in the system. Both are on the back-end of that list and they’re both relievers. The article yesterday looked at the left-handed pitchers for the 2019 DSL Pirates, along with the southpaws signed during the 2019-20 international signing period. We don’t rank players until they come to the U.S., so it was a deeper look at the position.

We now turn to the second part of this series today with catchers. For those of you with our 2020 Prospect Guide already in hand, you have probably seen the Depth Chart section, which lists exactly zero catchers among the top 50 prospects in the system. Left-handed pitching is at a low point, but the catching position is even worse off right now.

Catchers Christian Kelley, Jason Delay and Arden Pabst all played at the top levels of the minors last year and received invites to Spring Training this year, but the fact that the Pirates brought in three catchers with MLB experience to fight for the backup spot, shows that they aren’t ready for a big league bench role yet.

Their best catching prospect right now might be Eli Wilson, the 16th round pick in the 2019 draft, who had a solid debut offensively and defensively with Bristol last year. His average was low, but I was told that he made a lot of loud outs and looked better than the stats.

While the Pirates signed seven left-handed pitchers during the 2019-20 international signing period to help that weakness, they went very light on catchers. When the signing period opened on July 2nd, they signed 16-year-old Venezuelan catcher Eybert Escalona. On August 5th, they signed Omar Alfonzo, two days after his 16th birthday. That has been it so far and any catcher signed here on out would likely be a filler, if they sign any at all before the 2020-21 signing period opens up on July 2nd.

Just like yesterday, I’m posting a brief scouting report on the 2019-20 signings, and the 2019 DSL players. None of the catchers the Pirates used last year received any consideration for our 2019 DSL top ten list. Seven of those players remain in the system, and four were in minor league camp during Spring Training in Bradenton.

Here are the players, starting with the 2019-20 signings:

Omar Alfonzo – If I had to pick one catcher to end up in the top 50 out of this group, it would be Alfonzo. He comes from good genes, as his dad Eliezer Alfonzo caught for six years in the majors, and a cousin Edgardo Alfonzo played 12 years in the majors. Omar has big time power potential and the ability to square the ball up now. He will probably be able to stick behind the plate, but the real intrigue here is the bat.

Eybert Escalona – His bonus wasn’t announced when he signed, though that’s commonplace for players from Venezuela, unless they get very large bonuses. Escalona is a potential power bat behind the plate, who uses the entire field. He has decent size at 6’0″, 180, and was described back in July as athletic and very strong for his age. He projects to stick at catcher, with solid defense for his age.

Jommer Hernandez – Hernandez was one of the bigger signings during the 2017-18 international class, but he was forced to repeat the DSL in 2019, after a poor rookie season. He posted a .317 average and an .829 OPS in 2019, while showing a slight increase in his walk rate and a nice improvement in his strikeout rate, which wasn’t bad to begin with in 2018. Hernandez did a great job defensively behind the plate, though he split his time evenly between catching and first base. He threw out 50% of runners attempting to steal in 2019. He was at Pirate City for Spring Training this year.

Geovanny Planchart – Planchart was also at Pirate City this spring. He was one of the final signings of the 2018-19 signing period. At 17 years old in the DSL last year (he’s now 18), he batted .368 in 32 games, with more walks than strikeouts. After the season, he was invited to the Fall Instructional League in Bradenton. Planchart threw out 42% of runners in his limited time, but also committed eight errors. It’s a relatively small sample size, yet there is some intrigue here due to those numbers on offense. The drawback is that it was a rather empty (very high) average, with just two extra-base hits.

Darwin Baez – Baez played his second season in the DSL in 2019 and showed improved power and a better contact rate. His .715 OPS is above average for the DSL, but as a second year player, it’s not enough to turn heads. Baez saw less time behind the plate in 2019, with more of his time spent at first base. His 28.5% caught stealing rate is fairly low for the DSL.

Jhan Polanco – Polanco was at Pirate City this spring and also during last September for the Fall Instructional League. He had a solid season in 2019, showing nice patience at the plate and solid contact skills. He was a late signing during the 2017-18 international class, though he wasn’t a complete unknown. Polanco struggled in limited playing time in 2018, then improved all aspects of his game last year. He’s a 19-year-old switch-hitter.

Rafael Escalante – Escalante only hit .207 in his first season of pro ball this past summer, but he showed nice power and had more walks than strikeouts. He was playing some first base along with catching, but before he signed with the Pirates, he was a shortstop. Escalante was very athletic, with above average speed and a strong arm. As a catcher, he is a bit of a project due to the lack of experience. There are definitely tools here between the power, speed, arm and plate patience.

Luis Hernandez – Here’s an interesting case for one reason in particular. Hernandez was a backup with the Pirates during their next to last Spring Training game. You don’t see DSL players in MLB Spring Training games, so that could be a positive for Hernandez. Unfortunately, he appears to be a glove only catcher at this point and getting called on to backup would certainly indicate better defensive skills. Hernandez threw out 53.3% of runners in 2019. On the flip side, he hit .232 with one extra-base hit and a mediocre BB/SO ratio. He’s also small for a catcher at 5’9″, 150 pounds.

Juan Mena – Mena got a decent scouting report when he signed in 2017, but in two seasons in the DSL, he hasn’t been able to get a full-time role. He has 184 at-bats in two seasons and showed improvements this year, even though he didn’t receive extra playing time with the better stats. He wasn’t among the players in the U.S. and turns 20 years old this summer, so those aren’t good signs.

Fabian Urbina – Urbina was originally an infielder, who switched to catcher before he signed with the Pirates. Since signing, he has played one game at catcher and 19 in the infield. I included him here because he’s taking turns behind the plate during the spring in the Dominican, but he’s probably the least likely among these players to stick behind the plate. At 5’8″, 150, he’s a small target for pitchers, plus he’s also very athletic, so infield seems more likely.

As a group, it’s not that exciting. You have some players who showed nice stats in 2019, but no one got consideration for our top ten list, which included five extra names. The two most intriguing players here are the 2019-20 signings. Both of them are power hitters with the defensive skills to remain behind the plate.