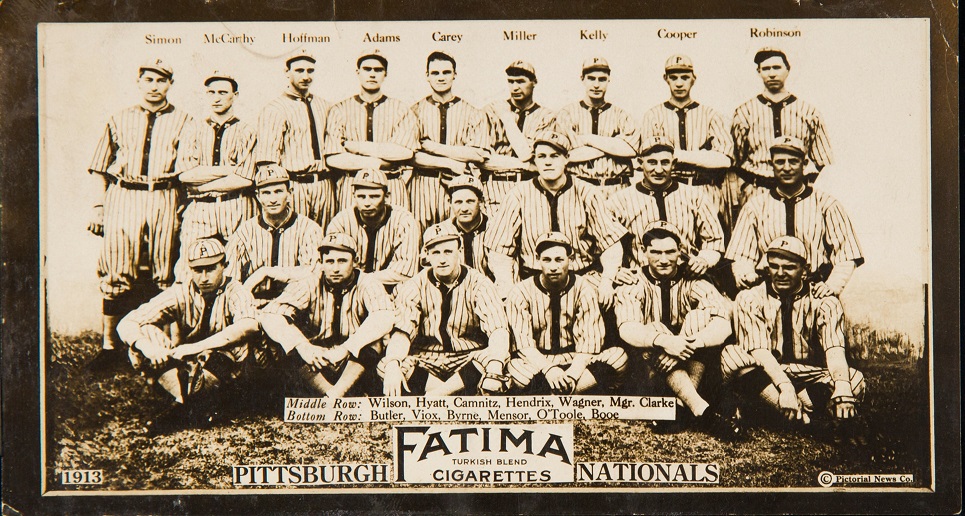 Back in 1913, Fatima Cigarettes put out a set of team cards for all 16 Major League teams. The cards measured 2-5/8” by 4-3/4”, though they also came in a much larger size called premiums, which are very rare today. Those required 40 Fatima coupons to acquire each one. The “T200” designation came around much later when old card sets were put into order by categories and numbers. The “T” in this instance is for tobacco. The T206 set includes one of the most famous cards of all-time, featuring Honus Wagner. That card will be a Card of the Day once the new history site in launched. This card actually provides a somewhat cheaper way to pick up a Honus Wagner card from his playing days. He isn’t in all of the major sets and he’s extremely popular to collect. He was reportedly against being pictured on tobacco products, but there may have been compensation for his image issues at the forefront of his scarcity. So while this isn’t really a Wagner card, it’s a card from that era picturing him. Wagner had a poor season by his standards in 1913, batting .300 in 114 games.

You also get two other Hall of Famers on the card, a young Max Carey and veteran Fred Clarke, who was the manager. Carey was in his third full season in 1913 and would go on to lead the NL with 99 runs scored and 61 stolen bases. It was his first of ten stolen base crowns. Clarke last played full-time in 1911, but he saw a few at-bats during the 1913-15 time period.

Standing next to Carey in the back row is Dots Miller, the pride of Kearny, NJ. Miller finished eighth in the NL MVP voting in 1913, then was traded to the St Louis Cardinals in the worst deal in franchise history (don’t argue that with a Pirates fan from Kearny).

The back row also includes Babe Adams and Wilbur Cooper, two of the best pitchers in franchise history. Combined they won 396 games for the Pirates, ranking 1-2 (Cooper #1) in wins. Adams won 21 games in 1913 to lead the team. Cooper was 21 years old that year, in his first full season in the majors, and he mostly pitched in relief.

The front row, bottom right hand corner, pictures Everett Booe, a 21-year-old outfielder who played a total of 29 games with the Pirates, making him the most obscure player pictured here.

If you missed our first two Card of the Day articles, they can be found here and here.