Today’s Card of the Day comes from the 1991 Upper Deck set and it’s one of the most interesting cards you will see. It’s not the front of the card that draws the attention though. It’s the back.

Upper Deck was in their third year of putting out baseball sets in 1991, while the Pittsburgh Pirates had an athletic 27-year-old second baseman in his fourth full season that same year. The Upper Deck set was known for their high quality photos and they drew a lot of attention by making young phenom Ken Griffey Jr. their #1 card in their first set. That move put them on the map right away with collectors and their subsequent sets rode that popularity wave.

The 1991 set was another high quality product, with a great photo on the front, while the back had a second photo that took up half of the space. That left very little room for stats, so anyone with more than a handful of seasons couldn’t have their complete stats on the back. The sacrifice was worth the extra photo, especially in the case of the 1991 Jose Lind card.

Here’s the front, which has a nice action shot and it features the old Pirates logo in the bottom right corner. 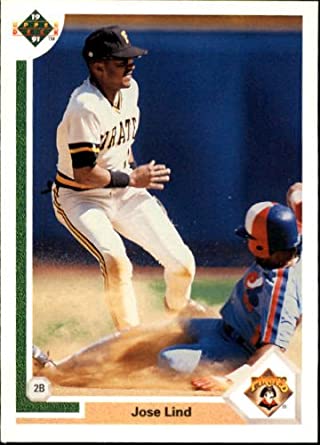 That’s a nice front, but the good stuff is on the back of this card. 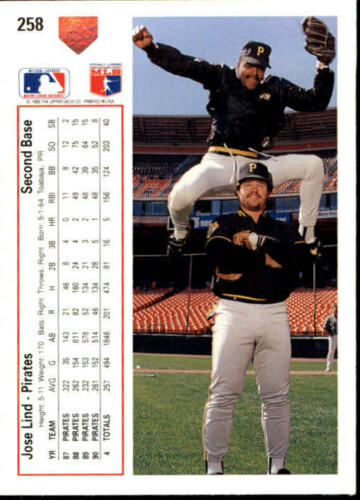 That is the 5’11” Jose Lind, jumping over the 5’10” Mike Lavalliere, who is standing straight up, with his arms folded and a smile on his face, showing no worries that someone behind him might not get enough height on their jump and something unpleasant could follow. I’m assuming that Lind cleared him and also that Lavalliere knew that he was about to jump over him. It looks like a staged photo, but maybe Upper Deck went with the element of surprise and Lavalliere thought this picture was for his own card? We can’t be 100% sure…

Chances are that Lind cleared him fairly easy. You can find video out there of Lind jumping over Joe Garagiola at Three Rivers Stadium. Gargiola, a one-time Pirates catcher just like Lavalliere, stood two inches taller than Lavalliere. Lind cleared the top of his head with plenty of room to spare, so he should have had no trouble with the slightly shorter hurdle.

For the record, Lind had a fairly solid season in 1991, showing strong defense, to go along with a .265 average and career bests with six triples and 54 RBIs. It was worth 1.2 WAR, which was his third best season during his nine-year career in the majors. It was actually the last positive WAR season of his career. He posted a negative WAR in each of his last five seasons, four of those coming after the Pirates traded him to the Kansas City Royals.