Card of the Day: The 1982 Topps Traded Pittsburgh Pirates Set 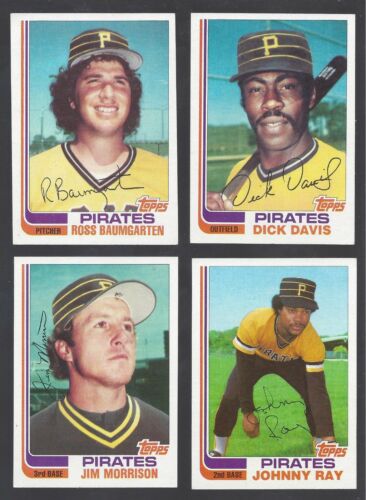 In 1982, Topps put out a 132-card traded set after their original 792-card set. The traded set was an extra 132 cards and included MLB debuts and transactions that happened after their original set was put out. They are marked on the back by a “T” next to the numbers. Also, the backs have a red background, as opposed to the green background on the regular issue cards. I cheated a little today by making this article about the four Pittsburgh Pirates cards in the 1982 Topps Traded set.

I actually just bought these cards as a group off of Ebay, with the intentions of doing this article. They were cheap and they work well in an article as a small group of cards.

As you can see, the mini-set featured Johnny Ray and Jim Morrison, two solid players from the 1980’s teams, along with Ross Baumgarten and Dick Davis, two players who didn’t stick around long.

Ray was an interesting addition to the set, because he already debuted in 1981 after the Pirates acquired him in August for Phil Garner. He had a rookie card in the regular set, so there wasn’t a real need to include him again in the traded set. Ray nearly won the NL Rookie of the Year in 1982, so his success may have led Topps to include him to help draw more attention to the set.

Morrison spent half of his 12-year career in Pittsburgh, playing solid defense at third base (and some second base), while putting up average hitting stats, though he was better in some years than others. The Pirates acquired him on a June 14th trade for Eddie Solomon.

With these traded cards, sometimes they didn’t have pictures of the players in their new uniform, so they airbrushed them on. Take a closer look at the three non-Johnny Ray cards…

Baumgarten had a rough time in Pittsburgh after coming over in a late Spring Training trade with the White Sox, the same team that sent Morrison to the Pirates three months later. He went 0-5, 6.55 in ten starts and two relief appearances. He was released during Spring Training in 1983 and never pitched in the majors again. Johnny Ray’s rookie is a three-player card with Vance Law, who the Pirates sent away in the deal to acquire Baumgarten.

Davis was acquired in a June trade with the Toronto Blue Jays. Obviously the Pirates were busy making deals in 1982. Davis originally started the season with the Philadelphia Phillies. He hit .182 in 39 games for the Pirates, then was released during Spring Training in 1983, ending his big league career. In fact, Davis was released the same day as Baumgarten.

Looking back on the mini-set, it wasn’t the most exciting group. Two of the players struggled in their time with the Pirates and didn’t stick around long. Morrison was a solid player for six seasons in Pittsburgh, but he was never an All-Star during his career.

Ray was the key card back then and he had some fairly strong years after his rookie season. He won a Silver Slugger award and was an All-Star one season with the California Angels. Interesting note with his lone All-Star appearance. His four best WAR seasons all came with the Pirates. They were all between 3.8 and 5.1 WAR. During that All-Star season, he posted a 2.5 WAR.

The set could have included Larry McWilliams, who was acquired by the Pirates from the Braves shortly after the deal for Davis was made. They could have also included Paul Moskau, a pitcher acquired off waivers in April, who made 13 appearances with the 1982 Pirates. There was also infielder Nelson Norman, who the Pirates got on an April 1st trade with the Texas Rangers. He only played three games with the Pirates, but he was still with the team when the set was produced. Maybe they had trouble airbrushing cards for them.